Since Age of Pirates II: City of Abandoned Ships was released, coders and modellers have been hard at work adding content, and fixing various bugs. These additions and bug fixes were then brought together to create something we at PiratesAhoy! affectionately call “The Combined Mod” This is our 4th official release of that project.

GOF 1.1
We are pleased to announce the latest release in the COAS mods, please see here for the latest mod. Moddb.com


In our latest release, much has been added. There is no way that we can list all the changes that been included in our Combined Mod, but this list will include the biggest changes.

-New Ships
Over 100 ships now exists in the Age of Pirates II world. Based off real world vessels, our modellers put plenty of hard work into making these ships as detailed as possible.

-Bug Fixes
Not only did we add a lot of content, but we fixed countless bugs. Game breaking bugs have become a thing of the past with our mod!

-Trade Adjustment
We have added more than 25 new trade-able items, and have adjusted the black market to be more period accurate. Also, goods imported and exported to and from each city reflects what each port may have, and in some cases, did trade in the 17th century.

-New Playable Characters
More than 25 new playable characters have been added, including some known from the Pirates of the Caribbean movies, such as Jack Sparrow captaining the Black Pearl and Davy Jones with the Flying Dutchman.


While this version of the combined mod is complete, we are continually looking at adding upgrades. To wet your appetite, here are just a couple of things we are working on.

Readable books!
Instead of relying on Inca Idols to improve your skills, how about a set of books to do the same thing. Not only do these books add to the realism of COAS but, they are also readable!

We at this time would like to thank all those who have contributed content to this release and all past releases.

Thank you for downloading this mod, and enjoy!
Happy Pirating!

So you look at GOF and ask yourself, why should I download GOF 1.1? Well lets give you some reasons of what make GOF 1.1 a great mod and well worth the time to download.

We will start with new features. 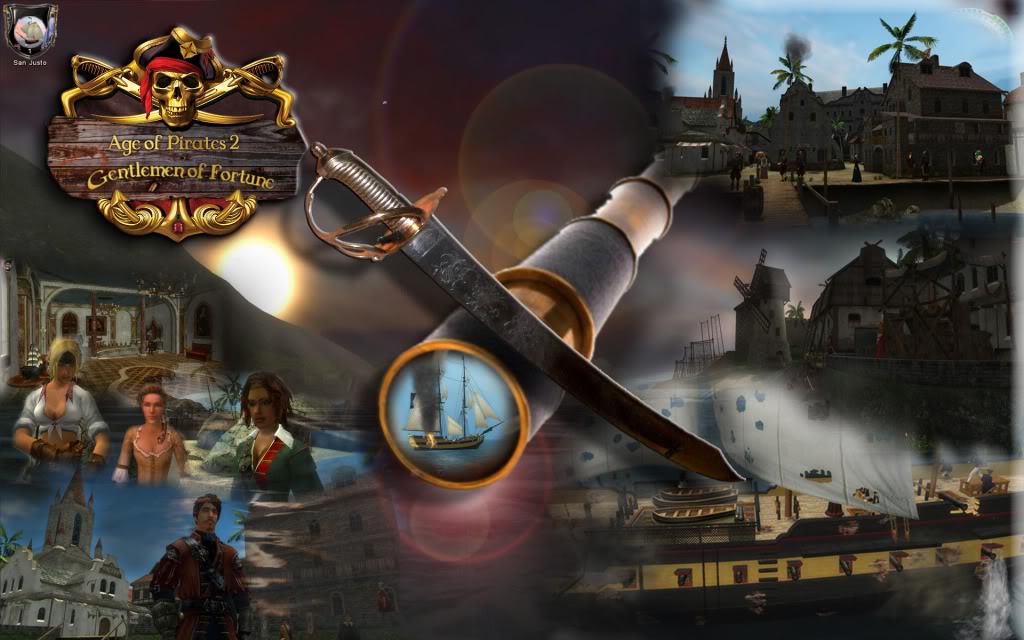 Mod options
So in CMV3.2 we had introduced switches which you could turn on and off in _mods_on_off. This mens going into the game directory and looking for that file everytime you wanted to change one of the switches. Now you can go into options menu, and in the bottom right their is a button for the mod options, which can be changed between realistic and vanilla settings. 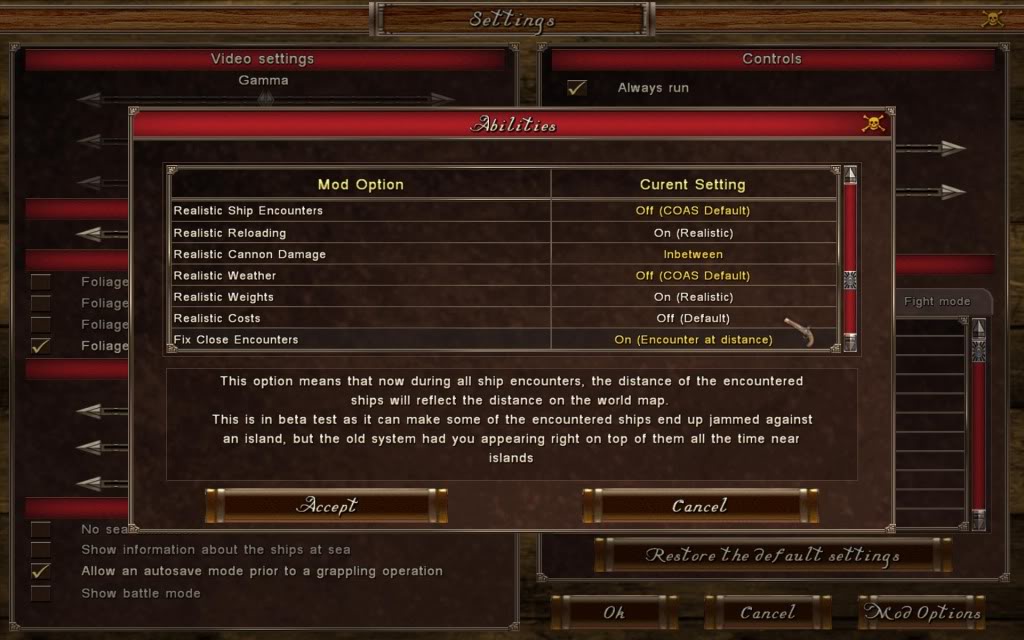 This makes it much easier for everyone to try out the different settings in order to find what they like and dislike. The new mods button also see's new switches added, so now you can choose between the vanilla wind speed or the realistic wind speed. This was a big problem in CMV3.2 because you only had one option and that was the realistic wind speed. Now its up to you which setting you want.

Weights for goods is another addition. Now you can choose which weights you want. Vanilla or realistic. Realistic will increase the weights of goods which means you can't carry as much as you can if playing with this setting on vanilla. The price of Goods is yet another switch, play with vanilla prices or realistic, which reduces the costs but also reduces how much profit you make from selling those goods. This, with realistic weights turned on, will leave you making less money so the game becomes more fun or harder, depends on how you look at it. 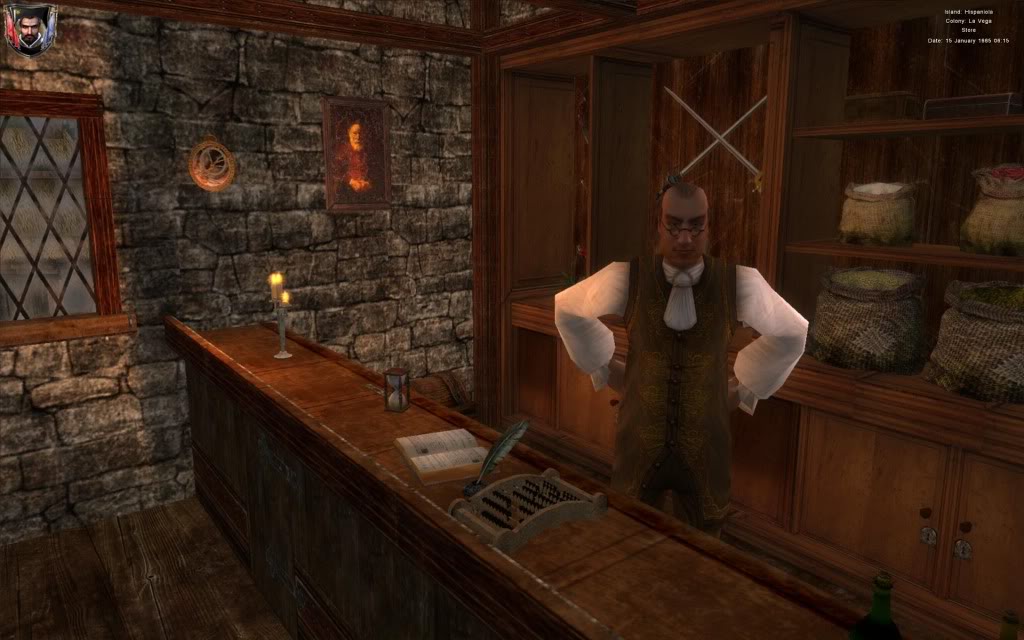 Another is cannon reload times. This was more of a fix than anything but now you can choose either vanilla loading times or realistic. 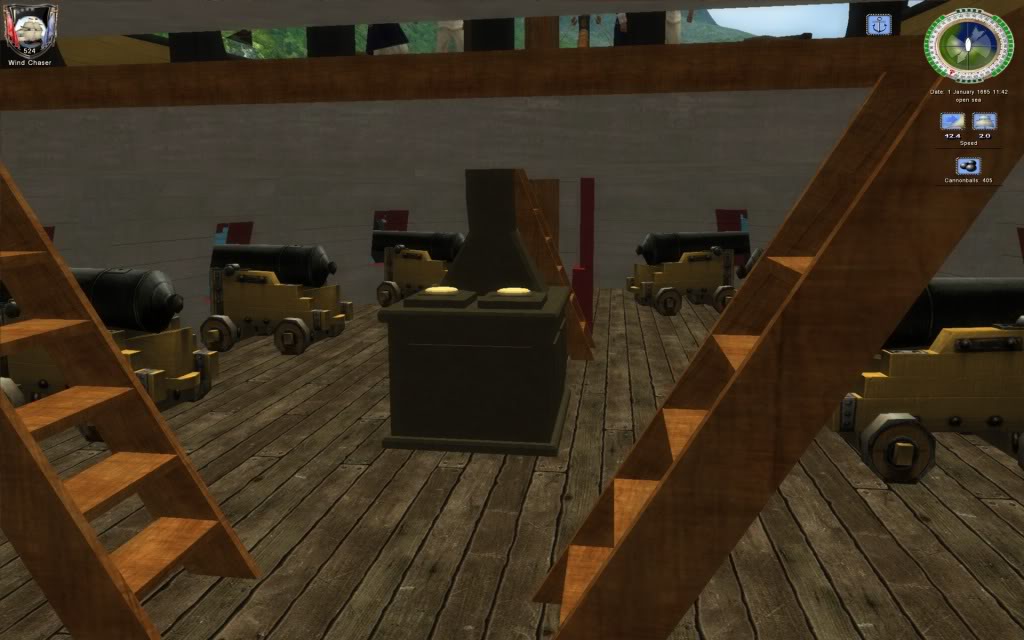 The differences is, vanilla loading times will take longer and this means longer naval battles. Turning realistic on though will mean the larger calibures will be more deadly as they reload much quicker than if this was set to vanilla. 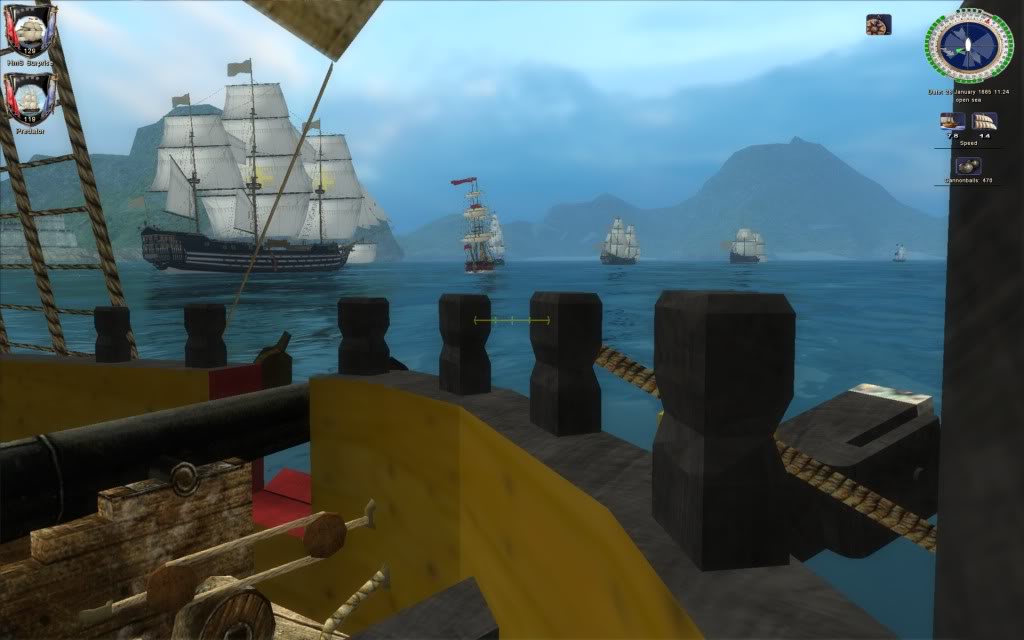 With almost every ship retextured now, you will be seeing ships that you once thought were ugly as pleasantly surprising now. The textures have improved their image a lot. 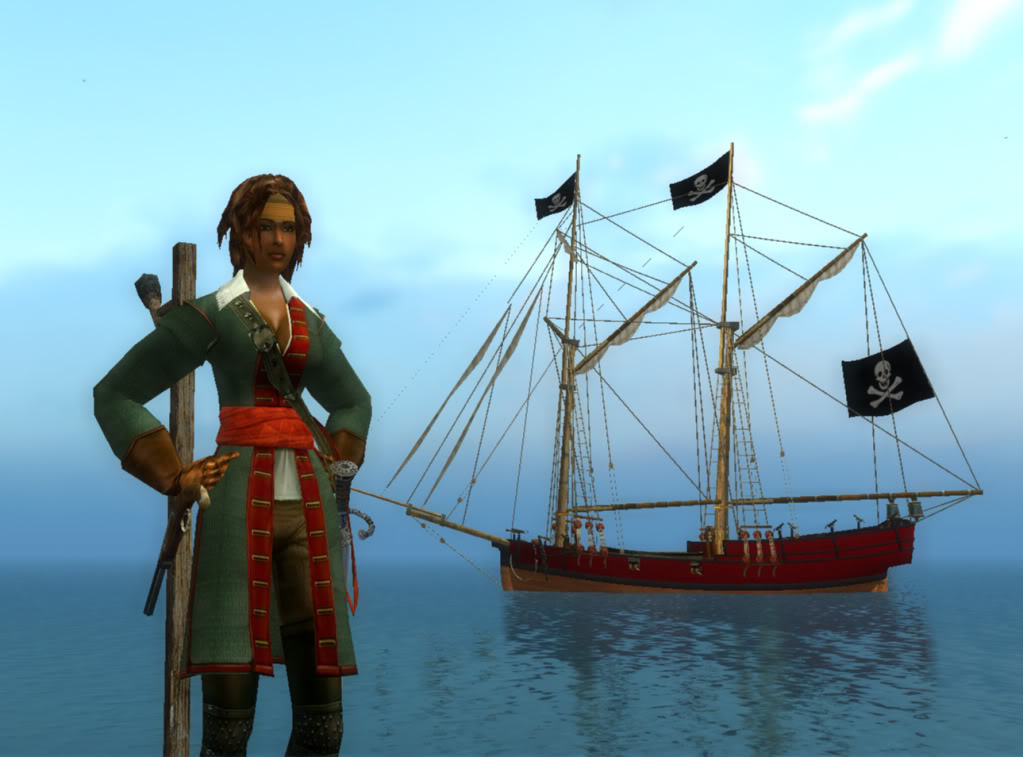 But better textures continue into the menus, characters and places in GoF. Now all menu's look much different, even when you start the game you will be presented with a new start menu which gives the game a much more appealing look and feel. Regarding buildings, you will find some looking exactly the same, and then some will be quit a bit different. This gives the feel of a different building rather than every building looking the same all the time. 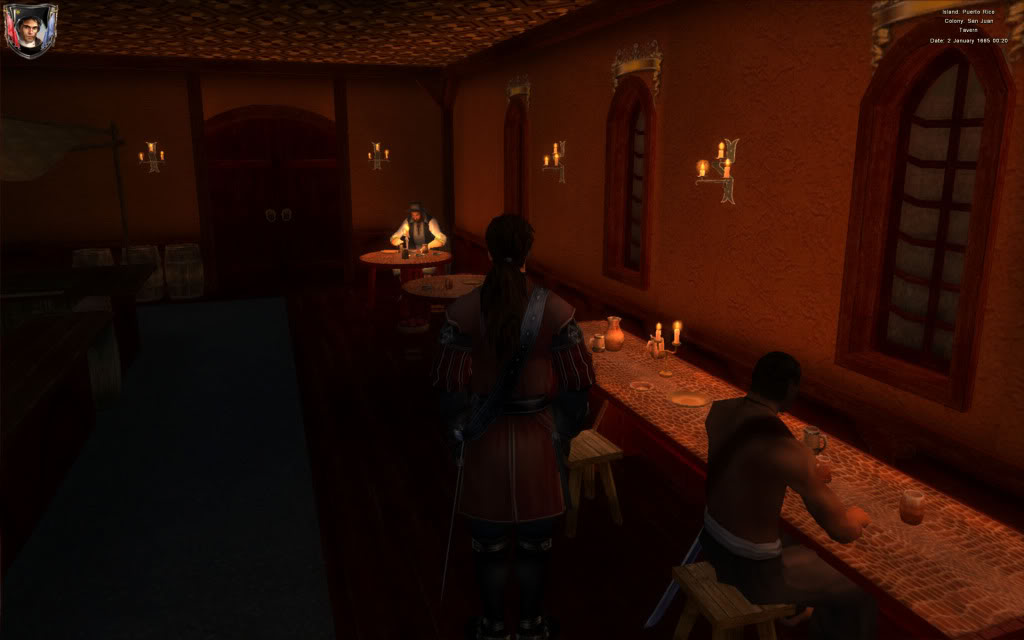 Fixes
Fixes are just as important if not more important than adding more content. No one likes a buggy game and COAS in its vanilla form was very buggy. It was unstable, which left you saving almost every few minutes just in case the game crashed. Now the game is much more stable with some people reporting playing continually for over 8 hours and still not experiencing a single crash. This is a big thing because we alway's wanted CoAS to be much more stable. Another big fix was the all to obvious ships small thumbnails in CMV3.2. Some ships had them but most did not. Now every ships thumbnail works. This fix had eluded us for a long time but no more. Item's wher another problem in CMV3.2. You would see iteam's with the wrong thumbnail image which was annoying, now all iteam's have the correct image and work fine.

I could go on for ever because so much has changed but I won't because it will just get boring for you to read. So I will leave you with this final thourght, if you had to pick between CoAS vanilla and GOF 1.1 which would you pick? Why don't you see for yourself.

This mod includes, but is not limited to, the following: 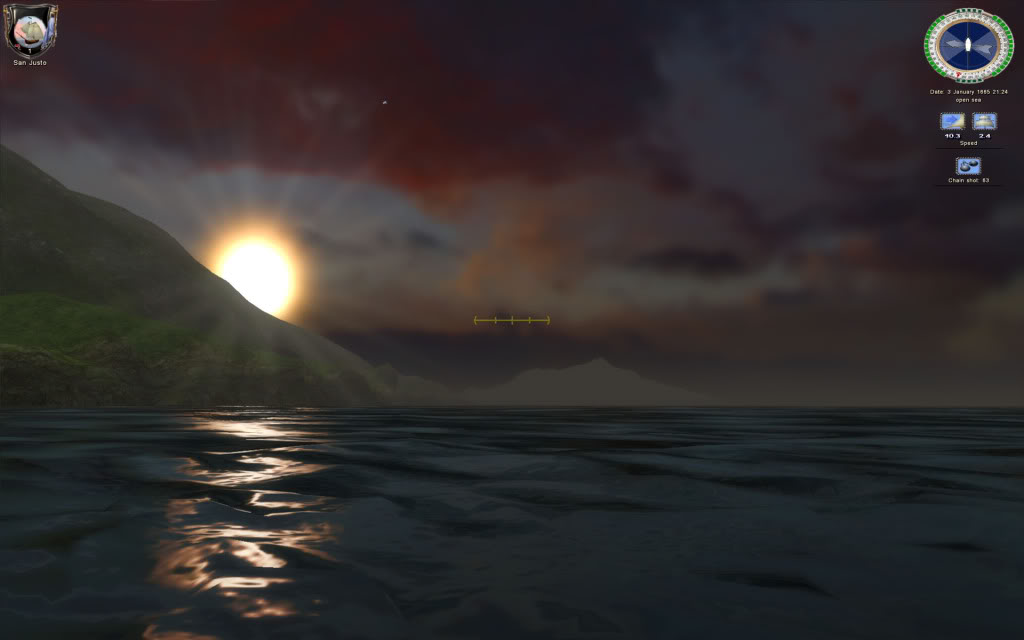 Enjoy the Mod Gentlemen! And Keep a weather eye! 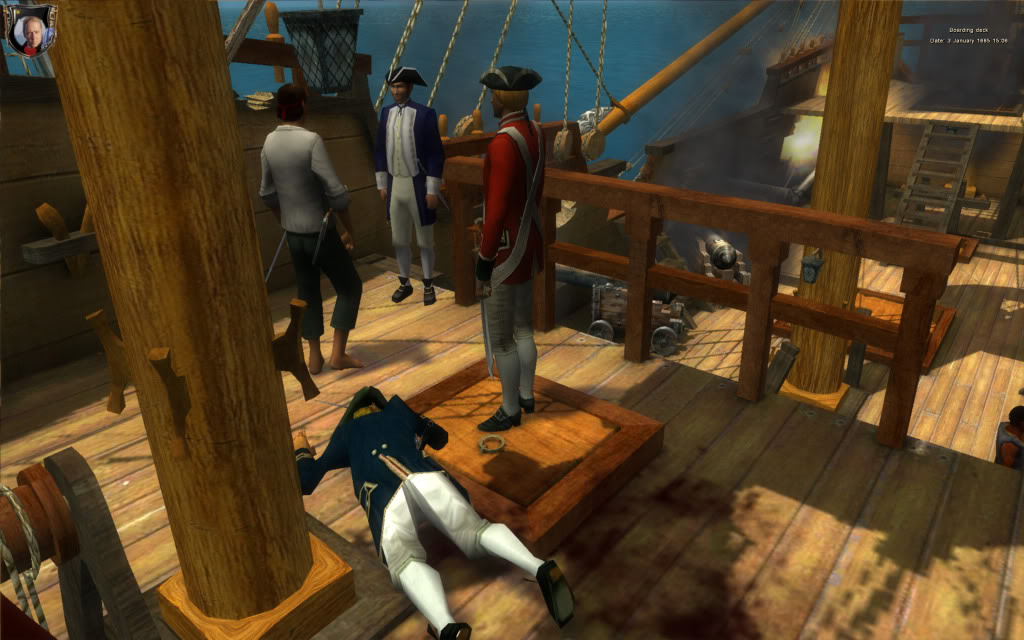 By Luke159, Modern Knight, and Craiggo

Come join us at Buccaneer's Reef and immerse yourself in the virtual Piratey treasure-trove to be found there!!! ARRRR Matey AVAST ye swabs!

Merry Christmas: Especially for Us!

If you care about pirates, the Age of Sail and computer games, you owe it to yourself to read on! We have a Christmas present bigger than we ever dared...

So what does the City of Abandoned Ships: Combined Mods actually do? See here and find out!

Age of Pirates II: Combined modpack v1.7 . This mod includes bug fixes and some code updates for the original game. No extra content.

While work still continues on Build 14 for Pirates of the Caribbean, modding has also been done on Age of Pirates 2: City of Abandoned Ships. Additions...

Some additional fixes for the initial release that address various gameplay issues.

You want to play this game, but it crashes because your video card is an Intel Onboard Graphics card? SwiftShader provides a workaround!

This application has requested the Runtime to terminate it in an unusual way.
Please contact the applicatrion's support team for more information.

where do i buy the game

The Aztec Tenochtitlan quest is bugged, The guy that supposed to be approach me on Mosquito beach doesn't show up. If there's any fix I'll appreciate it.

You can get CoAS on GoG now for 5.99!! It's supposed to be compatible with all versions of windows up to 10.