Cinema features quite a few changes to Max Payne 2, and to the way it's played. It's hard to describe most of what Cinema offers in words without sounding generic and bland, so it's definitely recommended that you check it out yourself!

Cinema aims to provide the player with more of a movie feel, and pulls the task off quite nicely. Miniguns, cinematic feeling scenes -- it's all there!

What would happen if you took the emphasis on realistic damage from F.E.A.R., the ludicrous arsenal of the Terminator and a Hollywood-style movie soundtrack and applied it to Max Payne 2?


Then you'd have Cinema.

Cinema will not immediately impress you. Unlike most mods we feature for this award, Cinema isn't a total conversion that takes the core Max Payne 2 engine and builds and entirely new game off of it. At the merest glance, you might not even realize that Cinema is any different from the original game. It certainly doesn't look that different.

But you could not be more wrong.

"The idea for the mod came from every action movie shootout that was worth watching more than once," mod creator Richard Gobeille said. "Every once in a while, a movie will have a sequence or two that's worth seeing a couple of times. The idea for the mod was to recreate the types of shootouts that make you say 'whoa' and rewind the movie the first time you see them."

While the first Max Payne focused more on the combat than the flimsy plot that held it all together, The Fall Of Max Payne was more concerned with telling a dramatic yarn while giving you gun battles in between the movie sequences. Gone were the realistically modeled weapons that recoiled and ejected shell casings in slow motion. No longer did we do battle with named gangsters in the underground, giving us a distinct feeling of shooting our way to the top of the food chain.

Cinema changes all of that, taking the killer action of the first game and juxtaposing it against that of the second, making for a truly engaging gunfight extravaganza. 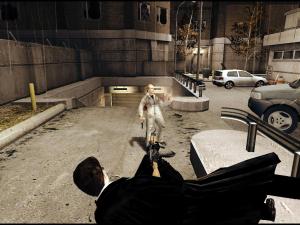 Sporting his new Armani coat, Max is ready for a night on the town.


Imagine diving into a room in excessively slow motion, crawling along just fast enough to where you can see the reactions of the people, seconds before you shoot three of them in the head. Bullet time has been tweaked to the point where you can pull off some superhuman feats now, running and diving and causing unheard of amounts of damage without even being winged, so long as you are quick.

"Very little real research was done on the weapons during the development of the mod," Gobeille said. "Most of the changes were made according to both what I remember from all of the movies I've seen and games I've played, and by what felt right. A lot of time was spent adjusting the various properties of the weapons by very small amounts in order to make things as fun to play as possible."

Guns look far more realistic and functional this time around and do far more damage than their predecessors in Max Payne 2 did, which creates an interesting dynamic in Cinema. Much like in F.E.A.R., you and your enemies are all carrying equally powered heavy weaponry. The difference is, you have bullet time to give you an advantage. It is now far easier to get killed in the game if you get caught in a heavy crossfire, which makes handling bullet time that much more vital than it was before.

Blood and ragdoll effects have also been tweaked throughout the experience, making your killing that much more violent. As opposed to many of the Max Payne 2 blood mods, of which I have sadly played many, this one does the best job of spraying bodily fluids without verging into the excessive range. It isn't uncommon now to send someone flying off a building, only to have them crash to the ground and make a nice splat where they landed. People tumbling down stairs also have a tendency to leave a bit of a trail, if that sort of thing suits your fancy. The ragdolls now also have an internal skeleton, so it is more common for bodies to slump to the floor in a heap than to pinwheel widely through the air, propelled by your ever-powerful arsenal.

"Shooting stuff is fun, which is why you do it in most games."

But nothing makes these sequences of mass mayhem come alive quite like the soundtrack, which starts blasting out of your speakers whenever you enter into bullet time and start dealing death to those around you. While many Max Payne 2 mods have experimented with this in the past, none do it as well as Cinema does. Rather than two or three little clips playing on repeat throughout the game, Cinema has over a dozen different tracks, all of which compliment the action without taking you out of the experience. There is a lot to be said for running into a battle, opening fire, and being propelled forward by the dramatic beat of a song that just encourages you to keep pumping round after round into a poor, helpless thug until he literally crumples to the floor before you. 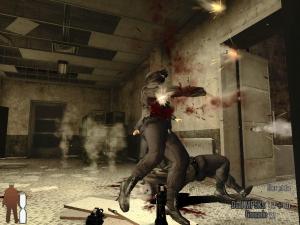 
Is it necessary? Hell no, but it makes the whole thing more cinematic, and that's the whole point.

"The music is an interesting aspect of the mod, because none of the selections I made are anything I actually listen to on any sort of a frequent basis," Gobeille said. "A few of the pieces were just tracks that I'd heard at some point in time on the radio or some such and thought would work reasonably well, and some of the others were fan suggestions. I'm not sure that I would have chosen any of the same pieces if I had made the mod 1 year ago instead of nearly 3, but I think they "worked" as far as the mindset I was in at the time goes."

And really, these changes make up the bulk of Cinema. When looked at objectively, there isn't a lot there, truth be told. Sure, Max now has a new, "cooler" model in the game and there are a few new Dead On Arrival maps for you to toy around with, but the basic gameplay is just the original Max Payne 2 with a lot of tweaks chucked into the mix. But it is these few tweaks that have turned Cinema into my Max Payne experience of choice. It may sound corny, but seriously, I have never gone back to the original game once since downloading an early version of this mod a year ago, which has also in turn resulted in me never once uninstalling The Fall of Max Payne.

Shooting stuff is fun, which is why you do it in most games. Download this mod and enjoy some of the best killing money can buy.

*Note: The video review for this mod was filmed entirely by Mod Database staff using an older version of the mod than its current 2.0 release, which we missed due to a very quiet and unannounced summer release.

It's a Cinema 2.0 mod without changes except the Bullettime music. I've increased music list to 67 tracks. It uses (mostly) rock music by various artists...

The Audio Interview by Baza with TerminX for Mod DBs October MOTM, Cinema for Max Payne 2

The semi-popular Cinema mod for Max Payne 2 Cinema features quite a few changes to Max Payne 2, and to the way it's played. It's hard to describe most...

Got this, when tried to start game with this mod:

What should I do?

How do i turn off the music during bullettime? I really don't like the rock music.

Can you please add a silenced MP5K, Sniper rifle to the next update?

How to get it to work on windows 7

sry for the late answering i made it with "start as administrator"
hope i helped you ;)

Super mod but its need more gun like m16 and new shotguns....

mannn this should be for max payne 1 too!