Maps have been with games for a long time.

If you consider the playfield of pong a representation a ping pong table - technically that is a map.

We have come a long way - many games now come with a map.

What is a map?

En.wikipedia.org - "A map is a symbolic depiction highlighting relationships between elements of that space such as objects, regions, and themes."

This is from one of my favorite commodore 64 games - "Wizard's Crown".
Not the largest map - but it was very exciting. Exploring new areas. Discovering treasures. Fighting evil things. And the map area descriptions included a ton of detail.

What impressed me was how open it was. You could literally travel anywhere on that map!

Many games of the time, from graphic to text adventures, arcade blasters, any game with a map had hard limits. No matter what might be about you were trapped in your area.

That seems to have mostly stuck with FPS games. From wolf 3D all the way to some current games.
You enter, follow the path you are led on to the conclusion. Get weapons, keys, kill bad guys, etc.
Only in recent years have open map games come about.

Quake and its derivatives seem to be stuck in the old days. Dont get me wrong - some of those maps are awesome. However, you still have just whats in that map, no more.

I remember the first time I played doom. And found the secret door to the outer courtyard on Hangar "e1m1" - I wanted to explore out there. Sort of disappointing to discover all you saw from the window was all you got.

One day I got into map editing for a doom II project. I found out why the maps were that way. Such is the nature of the editor, map format and engine. The entire creation and display process was limited on purpose due to the difficulties of rendering large open spaces on the hardware of the day.

So we were left with an illusion of space. Until now. Todays hardware is an age ahead of yesteryears. If you were a gear head back in the day, what our systems can do now blows the mind.

Still there is a challenge: can there possibly be an open adventure quake game?

It is a sticky wicket to be sure. 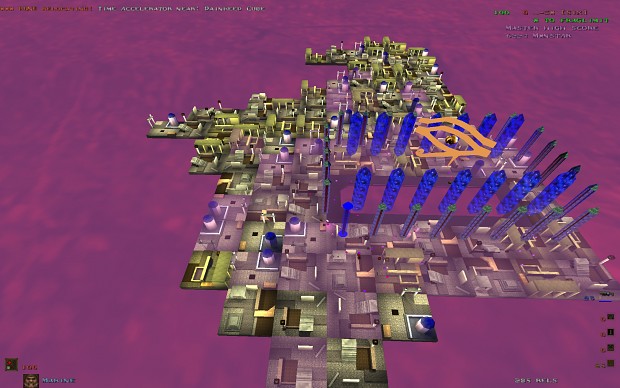 When I came up with the original chaos mod it was little more than a play mechanic (morphing into monsters) and some rough story ideas. I have had to discover everything else along the way.

Why guesses? A hard drive crash around '04 eliminated some data.

Several times I've had the idea to work an adventure type game into the single player. I've set it aside every time.

My biggest foe is a component of the quake engine - qbsp. In order to use a pentium 100 platform to display a complex polygon world, the progenitors of quake chose to pre-compile a bsp; pre-lit with a visibility matrix to limit total displayed objects. The map is built of "brushes" in an editor. Those brushes are compiled into a bsp file with collision hulls for solid surfaces. That file has lighting data compiled, and visibility positioning calculated as well.

I have had a great amount of help from my quake engine derivative of choice - Darkplaces.
It has some great features - 32 bit color override, tons of lighting tricks, its fast - really a great engine...
But, could it overcome the bsp bound nature of quake 1 mapping?

I have a dream of an adventure game. I will not let it go. 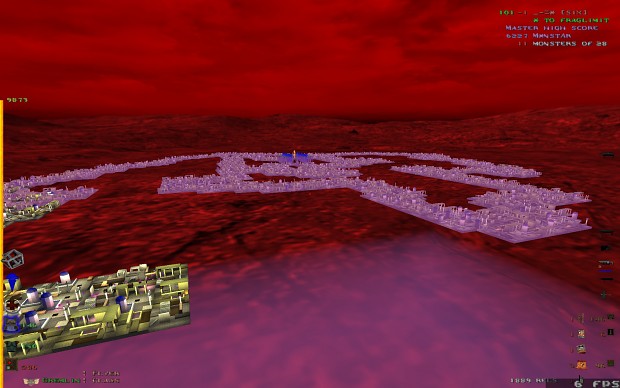 fig 3 - exploring around a bit

I have made some interesting discoveries recently while coding.

You can use the ammo box method (a bsp map with just the box and lights) to compile map "chunks."
Those chunks can be loaded as entities and set to SOLID_BSP. They are mostly just like map brushes.
So I have a floor and walls.

I'm still stuck building in a giant box if I want a sky right?
Heh heh. I found out as long as darkplaces has a big enough bit of sky brush anywhere - the loadsky will load and display a complete skybox!

I coded up a dynamic mapper and had a walk around.
I know it doesnt look like much yet. I only used 512 x 512 generic ruins chunks.
There are some minor glitches - but it freaking works.

So, new game plan - Chaos mod: Archon single player is NOT going to be a q1 rehash with better monsters, gfx, etc.

It is going to be some wicked awesome quake-hack adventure!