Check out the rendered Subterranean Dwelling, the first of the "camp" buildings we'll be showcasing.

We took our time again hoping we would be able to bring at least 3 assets - but once again, life got in the way (life is like a tank, it doesn't ask questions, it just... drives you over).

So to start off this SERIES we included a WiP of the Subterranean Dwelling - modeled by myself and brilliantly quick-textured by CitizenOfTheWorld for this release.

We might adjust a few things, clean up the polys, but then this thing is ready for final texturing and implementing into the FreeSDK. 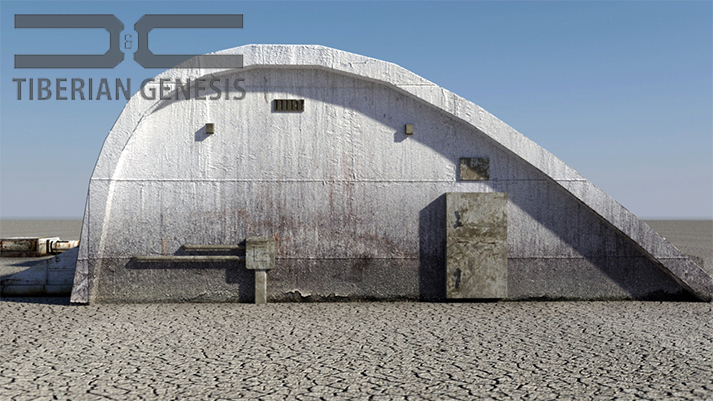 As you can see, we focused our efforts on the "camp" buildings. It was the first thing you saw in Tiberian Sun (we all remember the GDI mission 1) and those were one of the things that gave it its initial atmosphere.

We put much research into this, developed design documents, and analyzed every pixel (literally!) - in this case, the whole tedious research was done by TJF!

Finally, we'd love to introduce Joey to the team - he's done some impressive concept art and is currently working on some weaponry. As someone who's spent more time in a real battle zone than any of us ever have playing games, his models look realistic, functional and when combined with his knowledge of the GDI faction... you'll see it yourself!

As for the site. "Something awesome is happening"!

Expect the second prop soon!
Until then, we'll head back to work.

Very very impressing, when I first saw it, I thought you found something similar to a subterranean dwelling in real life, and took a picture of it!!!

HOLY S***! i thought that was jsut some pic u took in real life! thats awesome (tho i doubt my potato/laptop can run that)

cant wait til it comes out!

I didn't know that wasn't real photo until you talked about polys... It's beautiful.

All credits go to CitizenOfTheWorld for the textures and render, he did an awesome job!
Keep in mind that these were made on a short-notice, the real UVWing, detailing, decals, etc are yet to come ;)

Cryengine does a nice job at rendering, the shape is original, but I think you should have one more material for the dwelling. As it is, the scaling is too large and the texture just looks flat projected on a box. I suggest using a different material for the side of the roof and perhaps the roof itself. Also the distribution of the rust is a bit random and not in the places you'd expect it the most (top + bottom).

>> EDIT: just read your comment above and understand now. Posting early stuff is cool, but can be confusing.<<

A really nice structure! Great job on that!

Last time I watched Aliens i noticed that the colony buildings in Hadley's Hope on LV-426 looked a lot like the buildings you find in Tiberian Sun. Maybe the TibSun-buildings are inspired by the buildings in Aliens?
I couldn't find any good pictures of it on the internet but watch Aliens and take a look at the buildings. That could give you an idea of materials and textures etc.

The only pictures I could find where these:

But then of course I'm thinking of these TS buildings and not the dwelling above:
Ppmsite.com

Kudos to Incognito and CitizenOfTheWorld for making such a beautiful building. But I have to say, even with the first pic clearly showing its from TS. I still couldn't remember that building WAS from TS. IDK maybe because it was rarely seen in TS or something that made me hard to remember.

naa, it is pretty common in TS I think

Kudos to TJF as well from literally analyzing the thing pixel by pixel and coming up with the 10 page long design document that was used as a guide for modeling and texturing ;).

Right. Some how I missed that part. Cheers to TJF aswell. :)

All you need to do to amuse me is poot a large tiberium field and give me harvester, but this is cool too I guess.

Awesome, this mod is worth watching. :D

Where did you take that picture? :D

i too thought these were real photos.
amazing, just amazing.