Command & Conquer Stargate Universe is a MOD developed by a french team on C&C generals: Zero Hour. The final version aims to be a whole new RTS game based on the popular Stargate franchise. The game will provide you with a total of seven playable races (Tau'ri, Goa'uld, Asgards, Réplicators, Ancients, Wraith and Ori), this diversity is due to Stargate world's own diversity (SG-1, Atlantis, Universe and movies). The MOD is designed to be released in three version, each one providing new playable races.

Works with V1.5 B1 130114 full version. This patch adds 3D models and textures for Asgard & Tau'ri. It also adds the english voices for the Goa'uld mission !

This patch for the 130114 version adds the last 3D models and textures for the Asgard buildings (Cosmic Controller, N.M.S.F., Secret Committe) and Tau'ri buildings (Defensive Position). It also adds the english voices for the Goa'uld mission.
We thank Gary Haution and Pete Thias for their vocal performance as the System Lord Menethou and the Jaffa Prime. They join the english casting with Caroline Piette et Javier Pinto (Sergeant and Colonel Windsor in the Tau'ri mission). 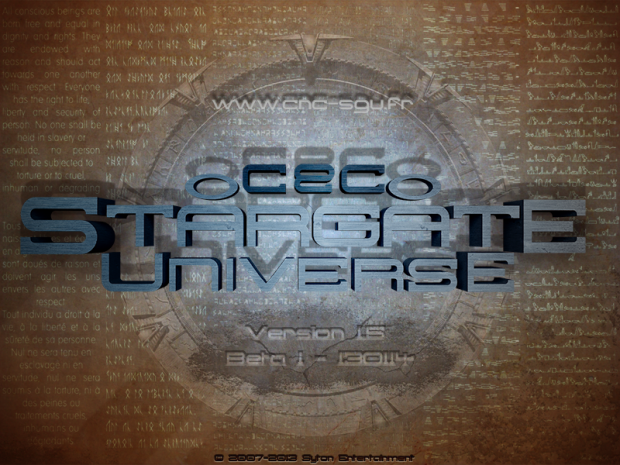 do you need the older verson first

It's just an update not a full version setup.
You need 130114 version to apply this patch.

i think yes because older version are more big that one !
And in the comment they are 3 new odels for this version !

I noticed a bug: I had installed version 130114, the I installed this version. When I start any skirmish match I instantly won... or everyhing gets destroyed in the first 2 seconds of game. I've unstalled the mod and everything but it doesnt works...

Did you run launcher as admin ?