Carpathian Crosses - The Romanian Army in World War II This is going to be an Add-on for Red Orchestra - Ostfront '41-'45, this means you can play standard maps along with maps like Usatovo or Chisinau. We will introduce new player models, new vehicles and new weapons to the game along with additional gameplay features. Make sure to check our website over at: Or you can join in on our IRC channel at #carpathiancrosses on the irc.gamesurge.net server! While you are waiting for new media (which we plan to give out quite often), we hope you can make yourself comfortable in our forums. To continue the tradition from the RO mod times, we created an "Ideas and Suggestions" forum where you can give your input and help the mod to improve. Also, we are always looking for talented guys to help us out, if you feel you have what it needs (beside skill, time and dedication is the most important), contact us.

Some notes on our first release and a big thank you to all involved.

The add-on has been released for a few days now and we have spent quite some time on the servers to see what people thought of our work. We've had some great feedback from the community so far concerning bugs and suggestions, which we will try to include in upcoming patches. Your feedback is still appreciated though, so if you find a bug or have any ideas don't be shy and post them!

We would like to extend a massive thanks to all the people that have downloaded the add-on. The client files have been downloaded over 7000 times and the server files over 400 times, so that deserves a thank you. We would also like to, once again, thank everyone that has been involved with the add-on over the course of the past year and a half. 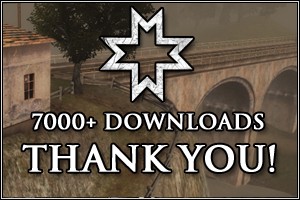 We would like to once again mention that we are always looking for more beta testers. A totally bug free release is almost impossible, but we would like to make sure that a lot of bugs get squashed in upcoming releases, which is we why we need more testers! Our plan is to release some patches in the upcoming future that not only solve bugs, but also add new functionality. If you're a proficient 3D artist, sound artist, animator, mapper, skinner or any other kind of developer, please don't hesitate to join since we can use all the help we can get to deliver patches and updates as soon as possible!

GREAT WORK GUYS.... THANKS TO ALL