Glisp: "It's time to finish this mod!"

It's been a long road everyone and I want to say thank you for all of your feedback on this mod and we appreciate your continued support. After a three or four year hiatus, I'm pleased to announce that Carnivores Reloaded is back in business! Yeah exciting I know. Coming back, most of the ideas I had for this mod are starting to come out. ibuildcircuits is busy implementing aI for our 10th and final huntable, Seismosaurus and I've been working hard on menus with the help of Poharex, patching bugs, and other things off and on for the past three years or so. 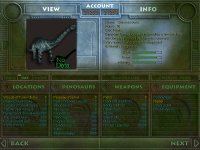 So what's in store for Reloaded's future? Well Build 7/beta 7 will be one of the last few major builds aside from bug fixes and map tweaks. Pyramids are Shmu Hadron will probably be part of Beta 8 though as I'm redoing that map since it never felt like it belonged there to me. Too much jungle and not enough desert. The tomb will still be there of course, I would never remove it as it was hard putting in all those ceiling tiles. Besides, it was part of the initial plan anyway. The rest of the map aside from the original island was mostly filler because I really struggled coming up with new ideas early on regarding said map.

The new area will deal heavily with desert terrain not unlike that of Carnivores Triassic (except not as orange obviously). But the desert will be quite harsh and filled with sand dunes. In the middle, there's a small Oasis hidden within a ring of rocks which offers the only relief animals will have from the otherwise unforgiving desert aside from the ocean between the islands but that's salt water. 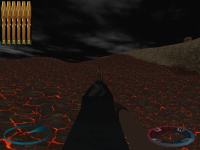 Build 7 will bring in the addition of the deadly and territorial Sauropod of Carnivores legend, Seismosaurus, as well as the equally legendary weapon, the Rocket Launcher. (see screenshot gallery for more details.) To make room for the Rocket Launcher, the C2 Rifle is getting dropped. This was done because it and the Carnivores 1 shotgun are pretty much the same weapon in respects to behavior. The Rifle fires faster but at the same time it's less powerful. C1 shotgun is still pretty fast. And don't worry, the Rifle will still be in the data files if you decide you want it back.

Another thing that will happen is the removal of Mount Hell version 3 and Great Lake of the Future. They may have fit the vision of the project back then, but not anymore. Mount Hell will be replaced with my "Volcanis" map. Great Lake of the Future will be replaced with something Poharex is currently trying to come up with. Obviously, Volcanis will be possibly one of, if not the most dangerous maps you can play on. I'll probably release screenshots of Volcanis in the next few days, though those that have been on the Carnivores Saga know what it looks like. (it's being updated heavily though to better fit C1's style.)

Just a reminder to those downloading this mod. The menu's EXE, CARN2.EXE, will produce a Heapallocation error if it is not set to Windows98/ME compatibility...

A list of features in Carnivores Reloaded. Please be sure to read them all.

No, you're not seeing a typo. Beta 5 was released a while back, I just forgot to upload it onto mod Database. Not much has changed since then other than...

A very early version of Carnivores Reloaded. I decided to upload this for anyone that hasn't played it yet and was curious about the earliest version...

Some people have reported area6.rsc missing. This download contains the missing .rsc file. I don't know when beta 7 will be finished so this will have...

While a beta, it's a full game. Things that are new include JenDOS_RUS' Dilophosaurus, Turan Choks updated some, and some calls for the Dilo as well...

Despite being a beta, it's a full game. It is only a beta because some stuff isn't finished yet. New stuff that's been added since last time will be covered...

The latest public version of this mod. Directions: -Unzip the .Rar file using winrar or 7zip. Be sure to create a new folder for the files or decompress...

Does this mod have the C1 Shotgun?

I can get to the menus, but when i go to start a hunt, nothing happens

I have a solution for that.
PLAY GODDAMN CARNIVORES+ INSTEAD!!!! >:(

hey everyone, P.Rex here. For those who don't know I'm a co-creator of this mod, I made half the maps, custom graphics and other assets for the mod. Just letting you all know that while Reloaded is officially dead, development continues under a new title: Moddb.com

See you all there!

Every time I try to open it, I get that same "Can't open resources file _res.txt" message. Any help on this?