This is a small project by me with the goal to bring the world of calradia into the late 15th century in a possible development for the world. The factions have been designed with their Warband counterparts in mind and with inspiration from real historical factions of the 15th century. The goal is to keep the simplicity of native but with a new feel to the setting. I am not an experienced modder and thus the project will start off very simple.

Preliminary look at the troop trees, and general update

With that out of the way, let us look at the preliminary look for the troop trees you might expect to find on the various factions in the game. There will be no images attached quite yet since asset implementation is still very much in its early stages. The troop trees are subject to change, especially depending on whether I implement separate recruitment of noble units or not.

If I do decide to implement separate troop trees one will be able to recruit militia units from towns and noble units from castles. The noble units in that case would be faction specific and require you to become a vassal of said faction to recruit them. This is not certain to be implemented as I am not sure it is fitting or not for the overall feel I am aiming, which is to keep it relatively close to native. For that reason I will list the trees below with the native system

In the threes below I've marked the troops as following: A troop with a black outline is infantry, green outline is ranged, orange outline is cavalry, and purple are horse archers/skirmishers. 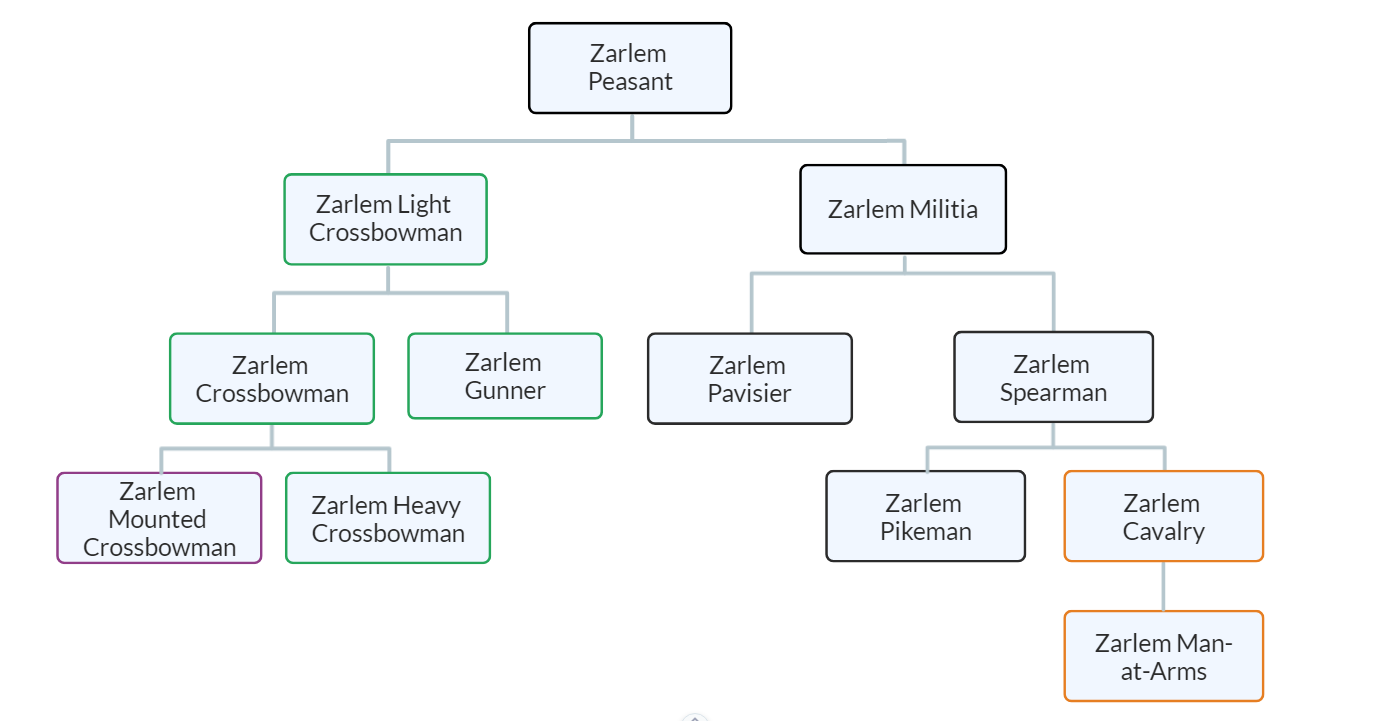 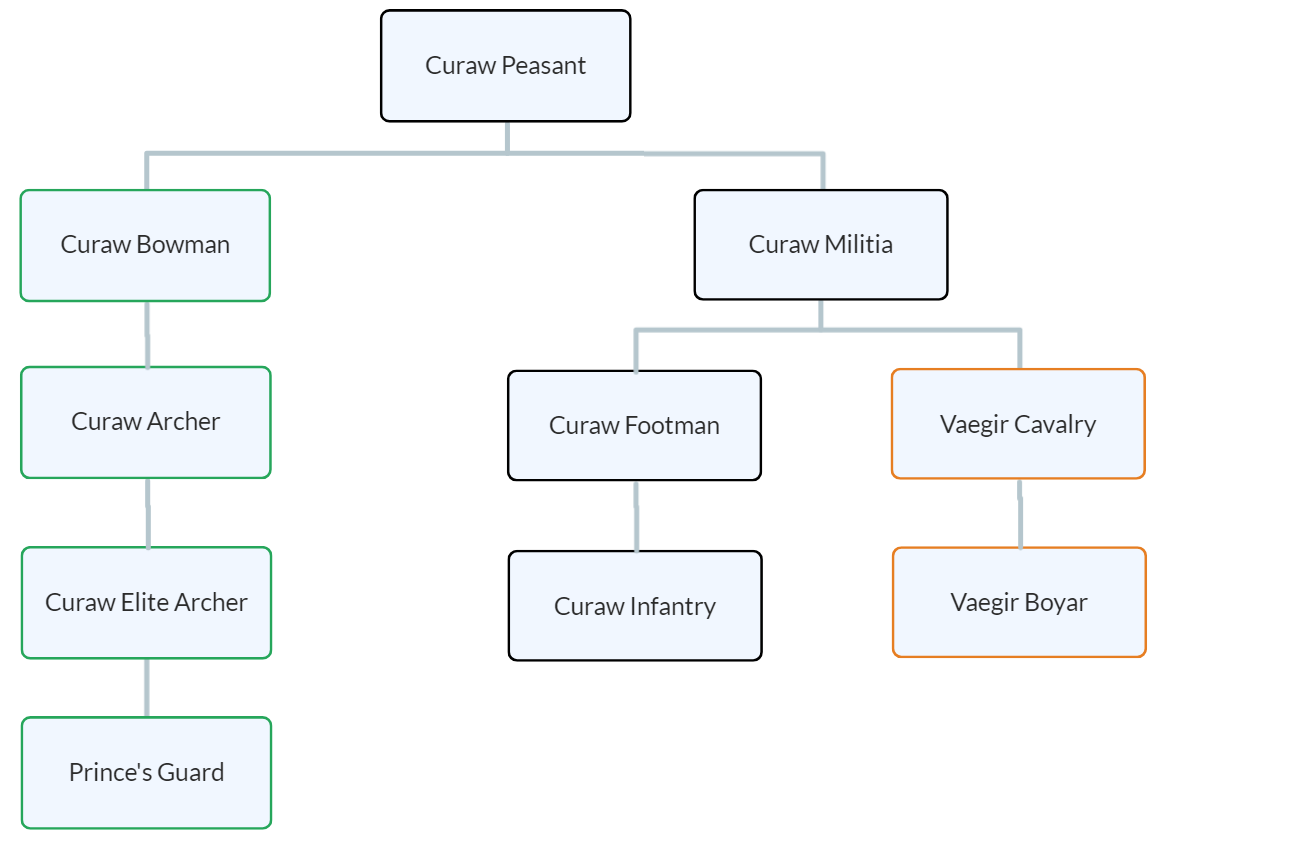 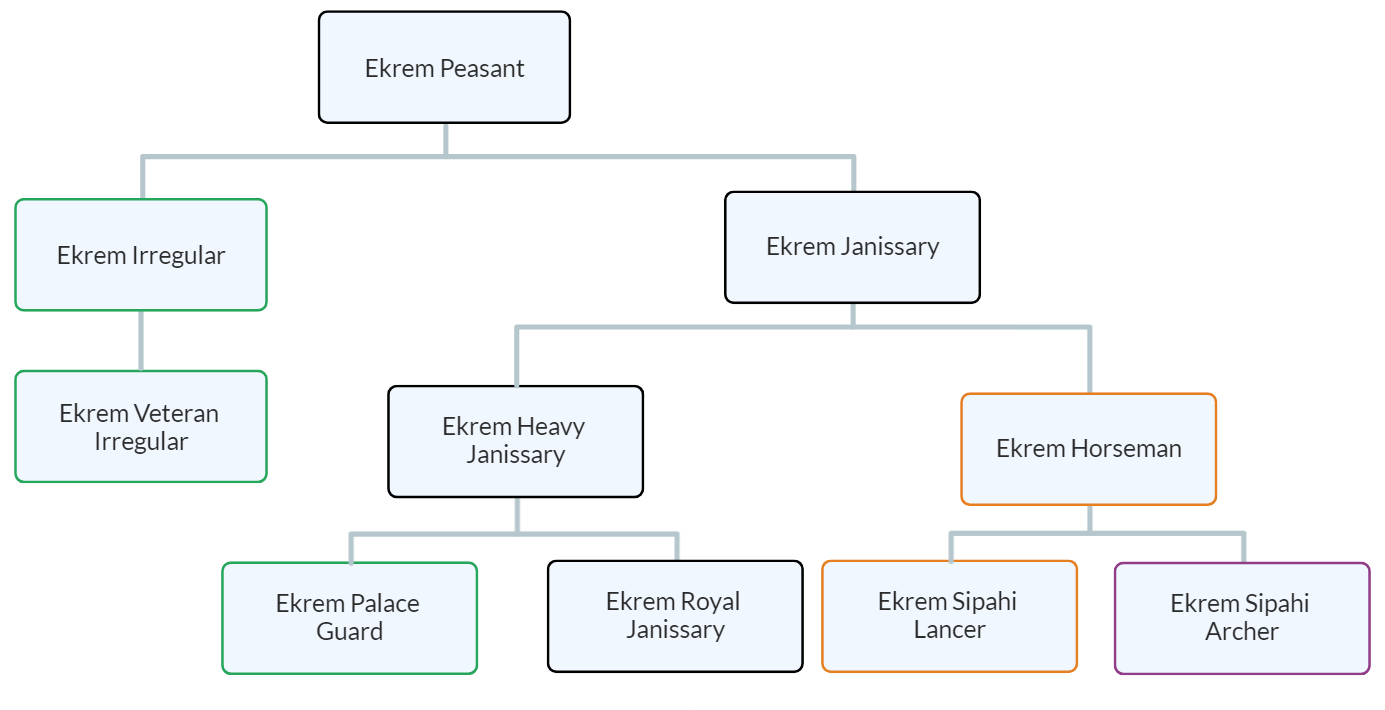 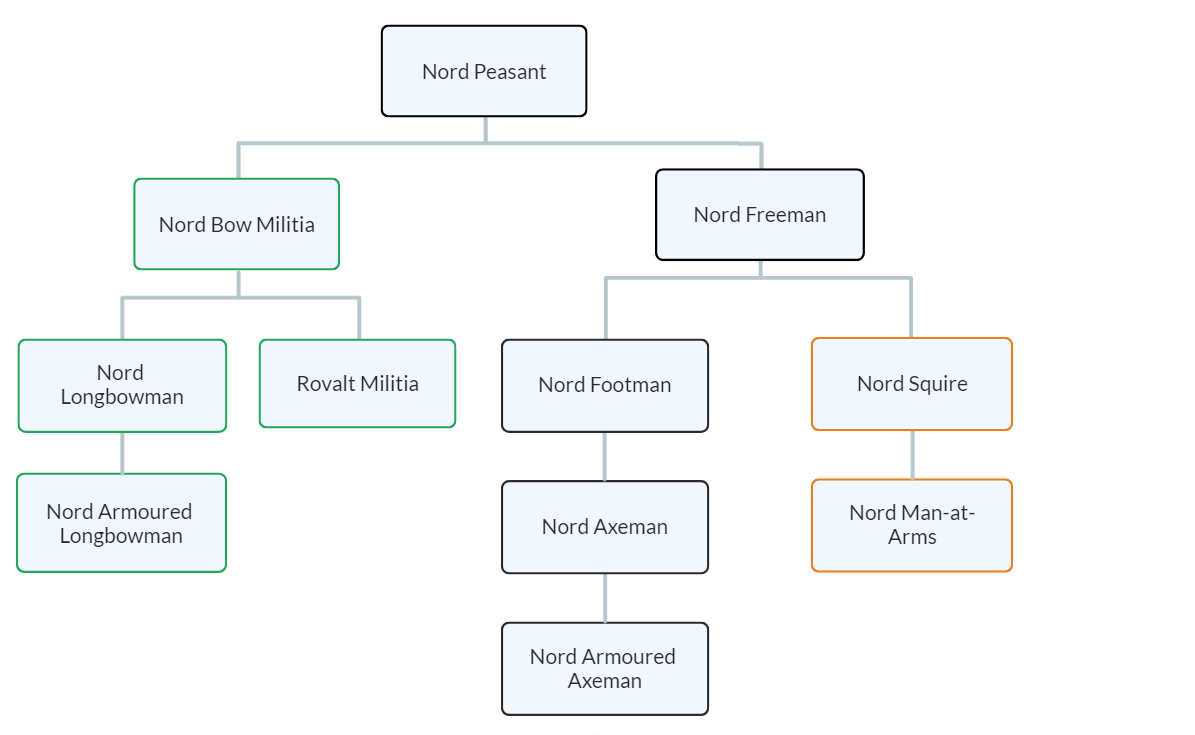 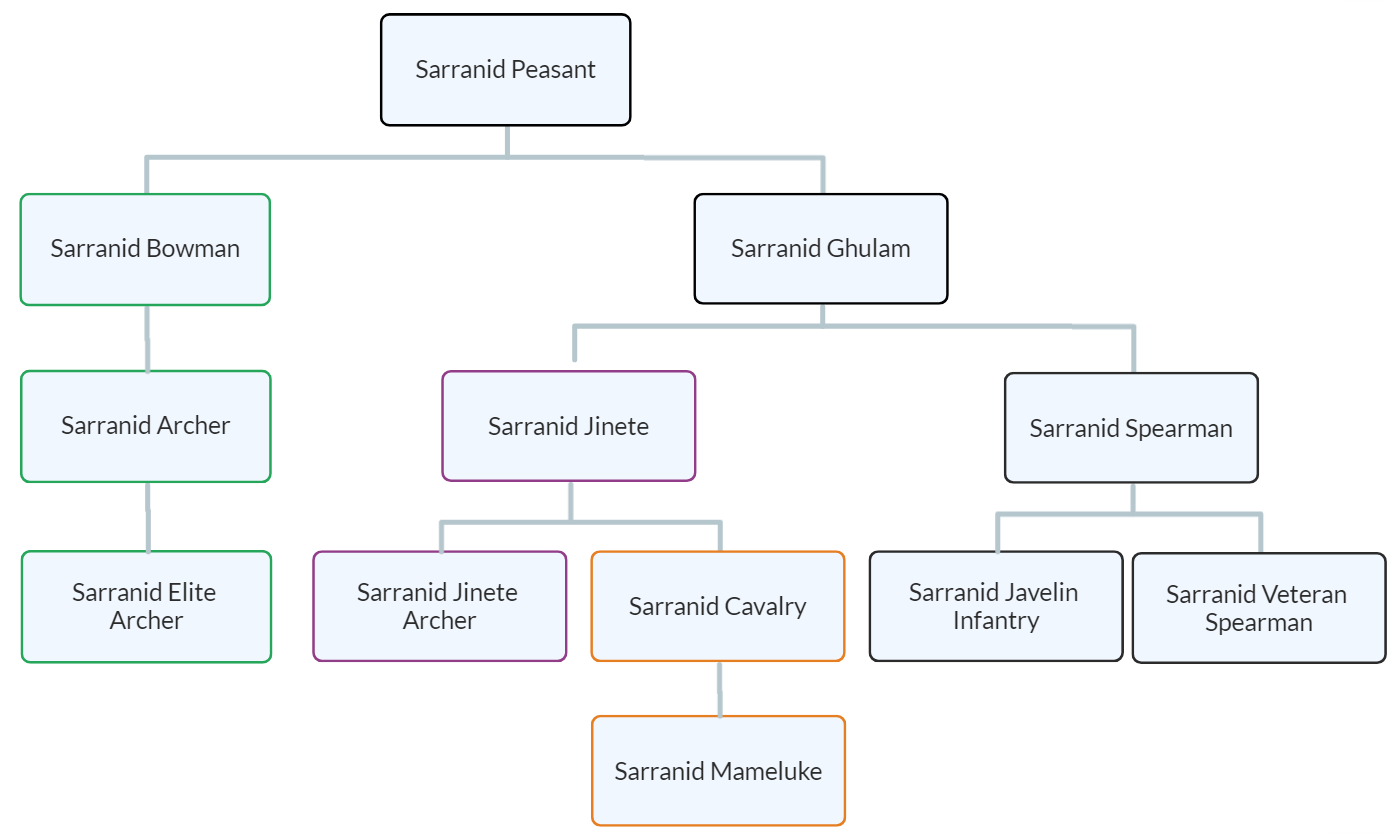 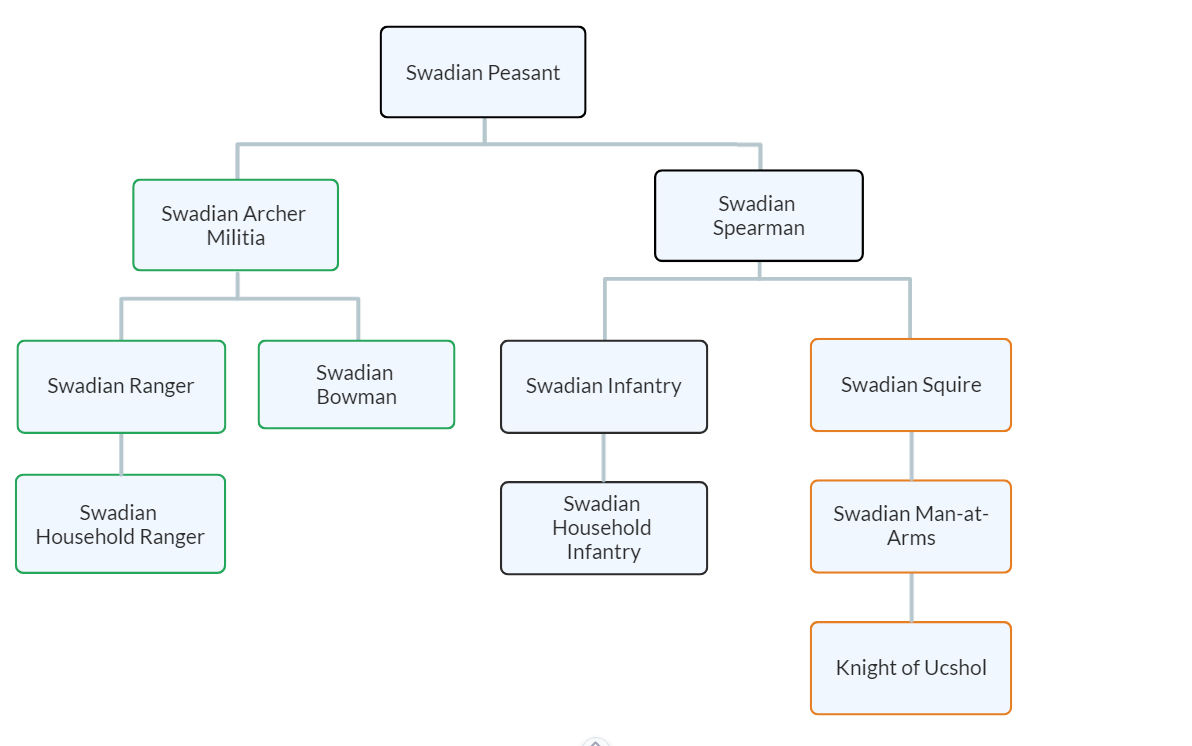 That will be it about the troop trees for now. If you have any questions or suggestions feel free to write them in the comments.

The plans and roadmap for this mod.

The previous article talked about the lore, so in this one I will lay out the plans I have for this mod and what I hope to achieve with it.

A brief look at the factions

Long story short, the mod is 'dead'. I do want to keep working on it but I've got a new job and other projects to focus on, and this mod was never my primary focus, so it's not being developed at the moment.

I might return to it at some point and provide the mod experience I've been wanting but unfortunately I have too much going on to do that currently. I might still be working on individual items etc, but I will not be posting updates on this unless I've decided to revive it for real and have something very substantial to show, which might not happen.

Sorry to people looking forward to this, but real life got in the way.

Hope this mod gets updated

Just to re-iterate what I said in the blog a few weeks ago, do not expect constant updates for this mod as it's a side project for me and not my main focus. But progress is being made slowly and unless I put out a statement saying it's dead, it isn't. It's just slow and will take time. I might switch focus to it more in the future, and if that happens development will speed up, but for now that is not the case.

looking forward for it

Maybe u can contact with that mod's creator, have lot of items that fit perfectly into your mod

I'll have a look, thanks for the heads up