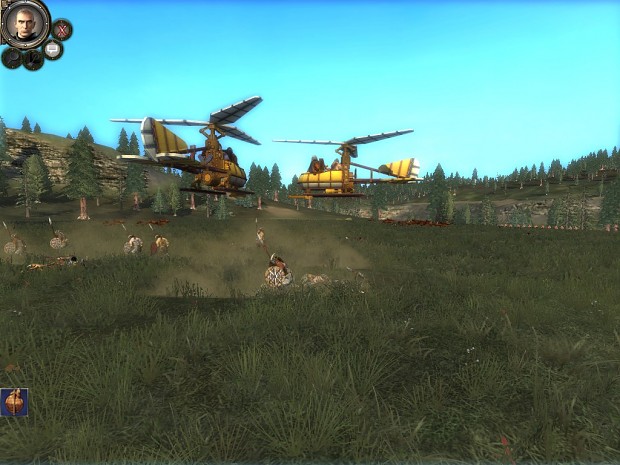 "get to the choppa" yes the blades spin, has a steam gun and breaks into 6 pieces when shot down. Also its not affected by stakes like cav and is very resistant to melee attacks, requires large creatures to knock them out of the sky or ranged attacks to shoot them down. I am really stoked we got this one working.

Are u entirely sure that u have tested thoroughly out? I am not doubting u but it is med 2 engine. If we had a video demonstrating its "invulnerability" to normal melee attacks and more to ranged attks or giant attacks it would be nice.

its a little trick you can do with the model height dont worry about it. ;)

Shrek, where is the Ogre joke or Shrek references?

He's ogre with that part of his life :)

Are other flying units such as Pegasus knights effective against these since they are technically flying units?

are dragons also "horses" if not are they better against gyrocopter.

How does one shoot them down? Efficiently.

"[...] requires large creatures to knock them out of the sky or ranged attacks to shoot them down."

how would dragons fare? ty for the ice witches btw :D

Are those two on the screenshot a single unit of a pair of them?

Sweet Holy ballsack of the Gods.

They only went and did it.

My m2tw engine doubts have never been proven so wrong.

Can they fly over obstacles such as walls, buildings and higher ground?

no, cannot fly over stuff.

That would add a new definition to sneaky capping

I recall doing it with doomwheel machines.

Oh wow, I never thought I would see something like that in M2TW. :O

Congrats on another incredible unit! These should be very fun to use in battle.

Btw, I noticed that the K'daai were removed from one of the earliest mass unit previews. Why is this?

It's answered in the 2nd page of that collage comments: simply dismissed, we chose another options, the ones already shown / commented.

Thank you, I was worried with excellent infantry, range, cavalry, and artillery chaos dwarfs would become overpowered as a faction. I will miss their short life span, though.

btw the gyrobombers won't be present, will they?

technically those are gyrobombers, but the old skool kind from 6th ed. back then the dwarf in the back threw the bombs instead of the newer spaceship looking ones.

i am happy now

We need Skaven flying unit, yes?
Also, the Sylvanians should have terrorghiests to combat all this aerial-ness.

This is just astonishing how you accomplished to make something like this. Probably the most unique unit as of yet as i can tell from the description.

Gyrocopters are revolutionary flying machines that provides the armies of the Dwarfs with dedicated aerial support or as a form of fast reconnaissance. These warmachines use a revolutionary rotor-blade steam engine that allows it to take off into the air and land vertically or even hover on the spot, becoming the first technological marvel to achieve the ability of flight. The first Gyrocopter was invented and then improved upon by Dwarf Engineers, and due to its rarity only a trusted member of the Engineers Guild is allowed to maintain and operate one. The inventors of this machine were first inspired by observing wild Dragons swooping down from mountain crags. They combined the idea of wings with that of engines used to drive drilling machines and flywheels from grinding machines, which would eventually be the basis for the steam engine that powers the rotors. After several centuries of constant calibrations and revision, the first proper prototype was met with great success. The earlier models were made mostly of canvas and light-weight metal, but as time goes on, the newest variant is far more heavily armored, and sports improve hull and weaponry.