Bloodstone Isles is a singleplayer RPG being created for Warcraft III. The map will take place on a chain of islands on the northern tip of a vast Empire. The player will only be able to access one of the islands at the start of the game, and then as the player progresses through the main story more islands will become available.

The player will play as Hector, a Knight-Captain in the Imperial Legion, who has been sent to an Imperial Outpost on an chain of islands called The Bloodstone Isles. He has been sent there to replace an officer there recently went missing.

Bloodstone Isles will take place on four main islands, and will allow the player to either follow the main quest, or go out and do other quests for the population of the Bloodstone Isles.

Bloodstone Isles will have the following features:

Its been a while since I've posted any updates about the project, but over the time I have been working on the project. Below is three new screenshots which I have uploaded to the images section. 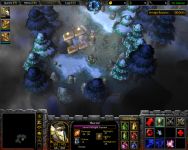 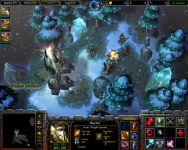 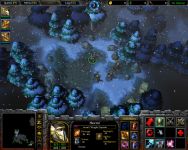 Also below is a progress report on how the project is coming along.

I have recently uploaded two new screenshots to the images section. These two screenshots are taken inside the camp of a mining company on the island.

Introduction to the Bloodstone Isles

This is an introduction to the setting of this mod, The Bloodstone Isles. It will features some of the different locations on the Isles, some of the history...

This mod looks pretty interesting. I can't wait for the final version (or first beta version).

Mine screens look awesome. <3 the lighting.

cool! Any thoughts on importing new textures or sounds?

I am not exactly sure what the camera is going to be used, but at the moment it is jut the default warcraft 3 camera, just locked onto the hero. I may implement a system later on though that allows the player to switch between the default warcraft 3 camera and a third person camera, or perhaps a system which allows the player to change the camera using the arrow keys.

Well there be a third person camera?

East Empire Mining Company? Imperial Legion? The rank "Knight-Captain"? Someone has been playing too much Oblivion and Morrowind.

Other than that, seems good.