Demons who came to Earth are now allowed to live in quarantine zones. You are a UAC Global Peacekeeper assigned to monitor them. Today is your last shift before retiring.

While John Romero was working on Classic Doom's Episode 5 "Sigil" I asked him to put an easter egg in it with the Rubber Tunes duck logo and a reference to Bloodine Megawad.

You can see it here: Youtu.be

Bloodline Megawad: why, what and how.

You are an almost retired UAC Peacekeeper, monitoring the designated areas where demons have their established living. One sip of your coffee, on a late night shift, and you notice a red alert on your monitor; 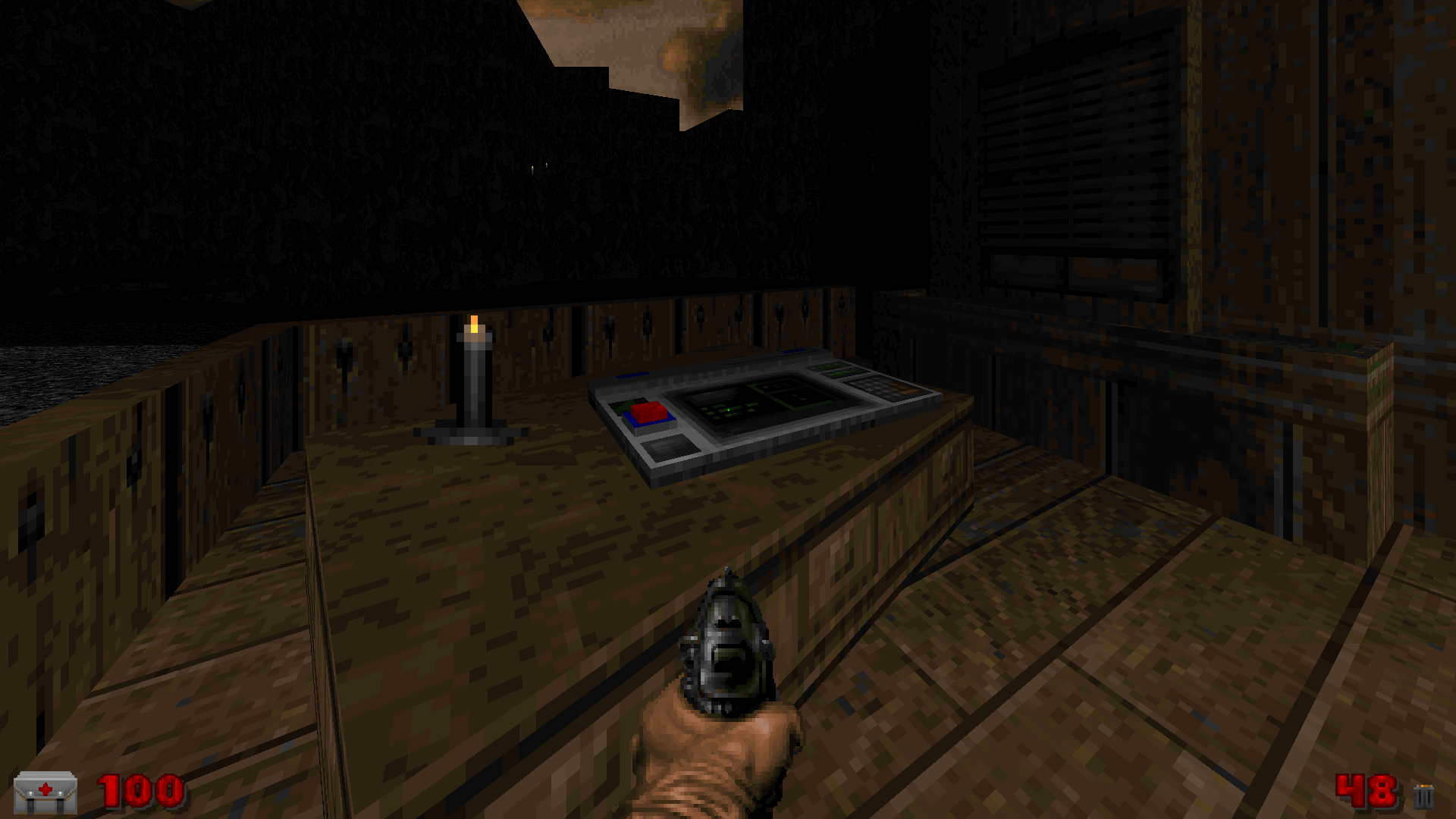 You sprint towards the headquarters to investigate...

My goal was to re-create the original Doom II levels but with a completely different story. My inspirational guideline was to use only the original textures. I love the classic design limitations of only being able to use one floor and ceiling at the time!

WHAT IS A MEGAWAD?

BLOODLINE MEGAWAD is a custom map pack for Doom II.

Megawad stands for a 15+ levels custom map pack for classic Doom games. It's also called a PWAD. The PWAD is the most familiar and widespread type of add-on for the Doom games and is typically used to store custom maps, define additional textures, or override or add to the default textures, sprites, sounds, or other data provided by the game's IWAD.

Nowadays it's possible to add slopes and multiple floors to classic Doom II levels with the use of modern map editing software. Bloodline Megawad however maintains the simplicity of the classic 90s style where this was not possible. This means it only uses horizontal floors and ceilings connected by vertical walls.

WHAT'S IN THE BLOODLINE?

I reflected some of my previous gaming experience into the design of Bloodline Megawad. Games like Unreal and Unreal Tournament from '99, World of Warcraft and even the original Ultimate Doom and Doom II worlds gave me ideas on how to design Bloodline Megawad. 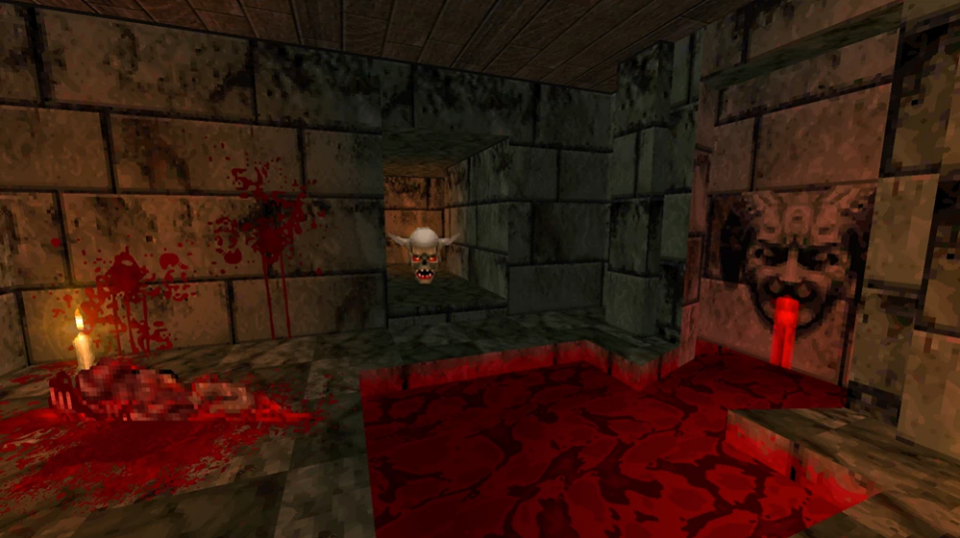 A Baron of Hell's Fun Fortress VIP blood booth. For drinking blood of duelling victims from the gambling area.

Doom II was the first game I ever played back in the 90's. I was deeply fascinated by all the guns, the intensely expressing textures, hellish monsters and atmospheric skyboxes. The level design of John Romero, one of the co-founders of id Software who developed Doom II really placed me into a nightmare I didn't want to escape. I really enjoyed the gameplay and wanted to get involved more by creating levels for it myself. 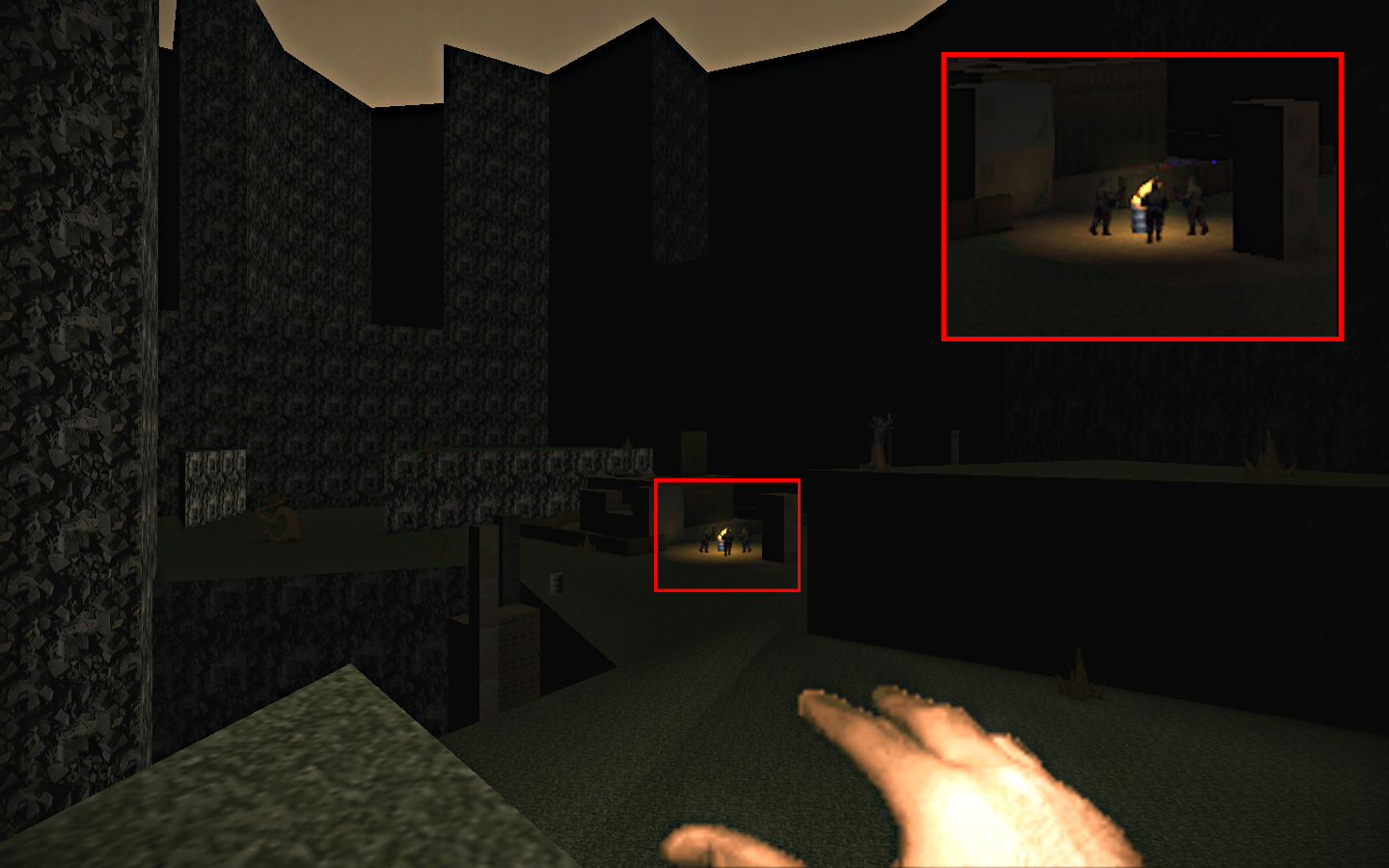 Back in the day when I discovered Doom II, it wasn't long before I was introduced to WADED by someone. This was an old DOS-based Doom II level editor. Countless nights on my old pentium PC with many hours on level editing followed, trying to create my own Doom II worlds with visions I feelings I had. I loved how my levels came to life and play them. The only downside with level editing back in the day was I had to go in-game to test my progress. This was very time consuming and lead to a 15 year break eventually. 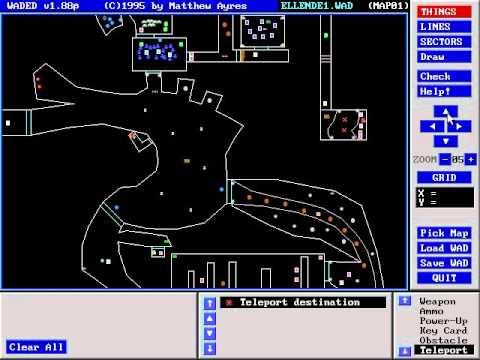 WADED, a DOS-based 1995 classic Doom level editor with only a 2D interface

DEEPER INTO THE BLOODLINE

15 years after I discovered Doom I started playing it again, adding custom levels and mods to the game to keep things interesting. A popular mod I enjoyed was Brutal Doom made by Sgt.Mark.IV. It came with a bunch of high quality custom map packs called the Starter Pack Edition/Recurring Nightmare. When I played this and reached level 23 called "Stronghold" I experienced something very strange and interesting! There were no monsters around and there never came any monsters as I walked carefully through the level. Because of this I had time to see how the level was designed, even though my heart was beating very fast. I was expecting monsters to attack me at any moment but they never did... When I reloaded the level with a simple console command, all monsters were back and I realized it was just a glitch and the monsters never spawned when I played it the first time. Even though it wasn't intended to be an empty map, I loved this unique experience and wanted to do something with it. It inspired me to pick up level editing again! 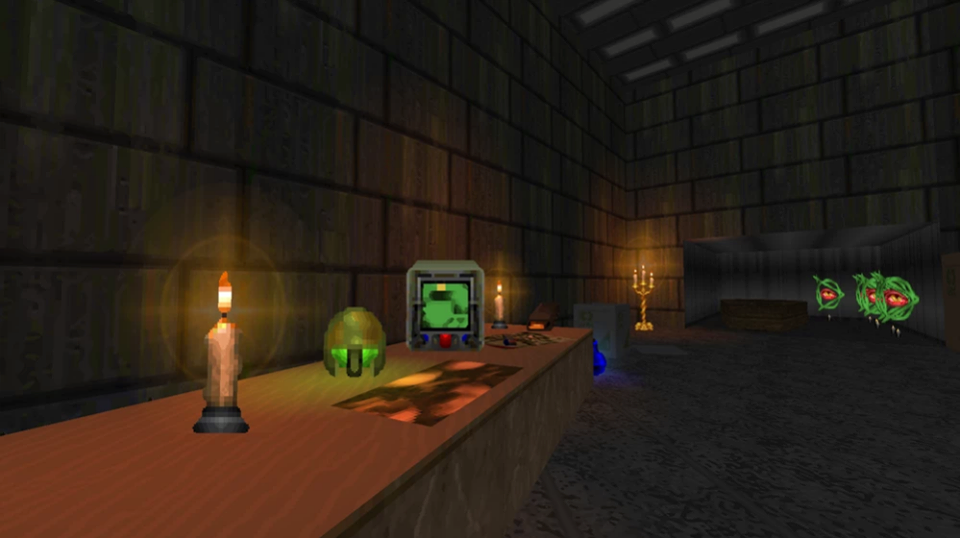 I also played other games like Call of Duty and Medal of Honor: Allied Assault but their editing tools were too advanced in my taste. 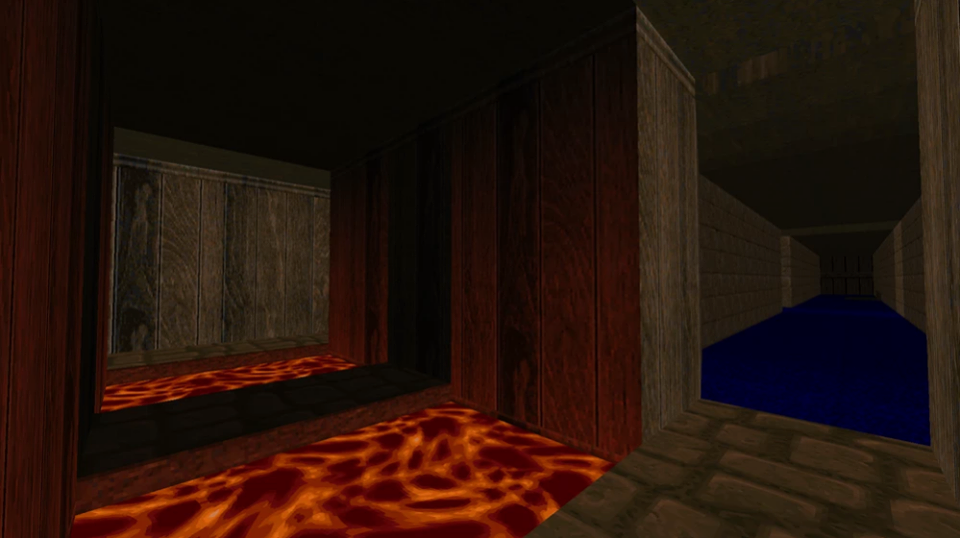 A weird area in Sandy's City

When I started creating Bloodline Megawad I partnered up with Luigi "LuiDeca/ WeeGee" Bonocchi who I met on moddb. We agreed to team up on this and he wanted to produce all soundtracks for Bloodline Megawad to give each level a unique feeling and atmoshpere. 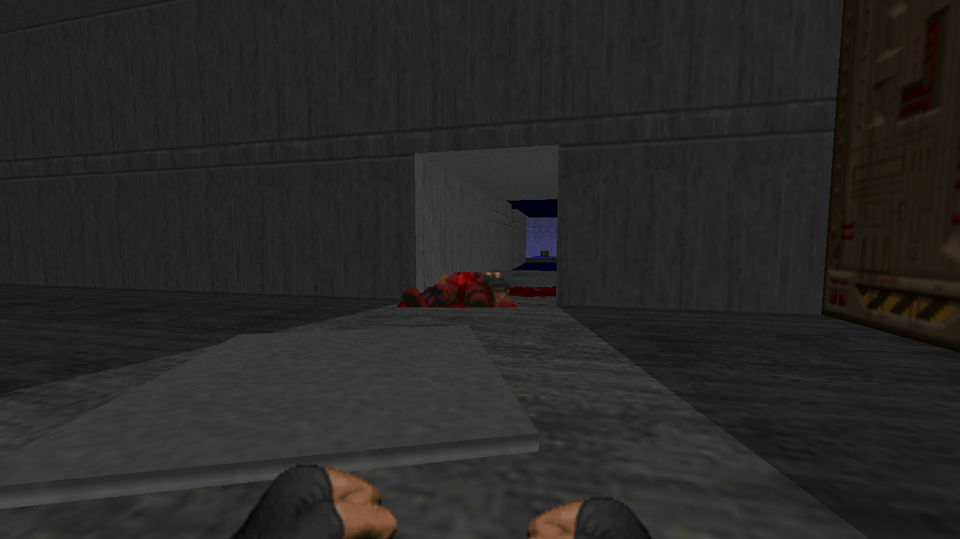 A secret passage leading deeper into the bloodline...

I started using more modern level editing software for Doom II instead of the old DOS-based WADED. It's called GZDoom Builder and is still being maintained and updated. It also has a 3D preview interface that allows you to fly through your levels and make adjustments at the same time. No need to start the game each time you want to preview your map, as was in WADED and similar old editors. GZDoom Builder also allows you to create slopes, multi story platforms, a body of water, custom sound placement, RP (roleplay) features, scripts, 3D objects and lightning, but that is still too advanced for me. 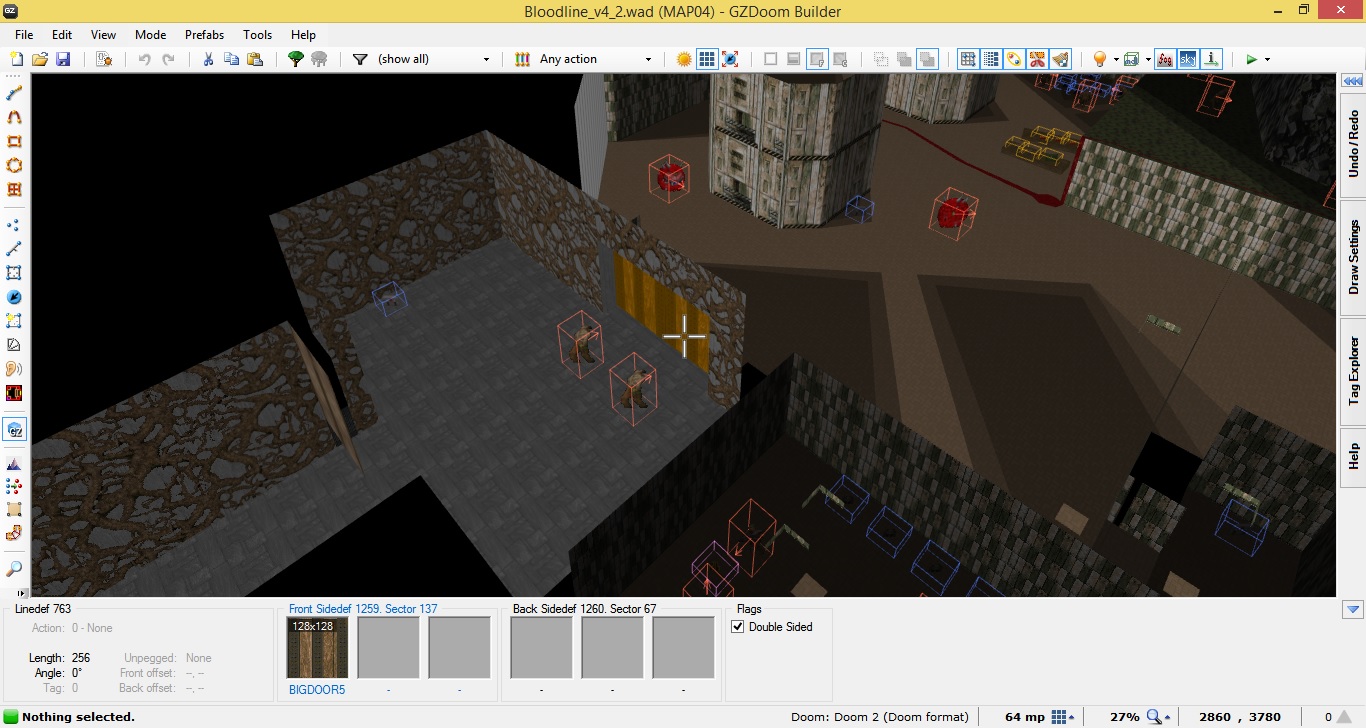 My experience with games like Max Payne gave me the sense of realism for the design of Bloodline Megawad. World of Warcraft for the great outdoors and repetitive dungeon design, Grand Theft Auto for it's open world, Medal of Honor for it's time traveling, Call of Duty for it's simulation, Unreal Gold and Unreal Tournament GOTY (game of the year edition) for it's combat and Far Cry for it's fantasy. 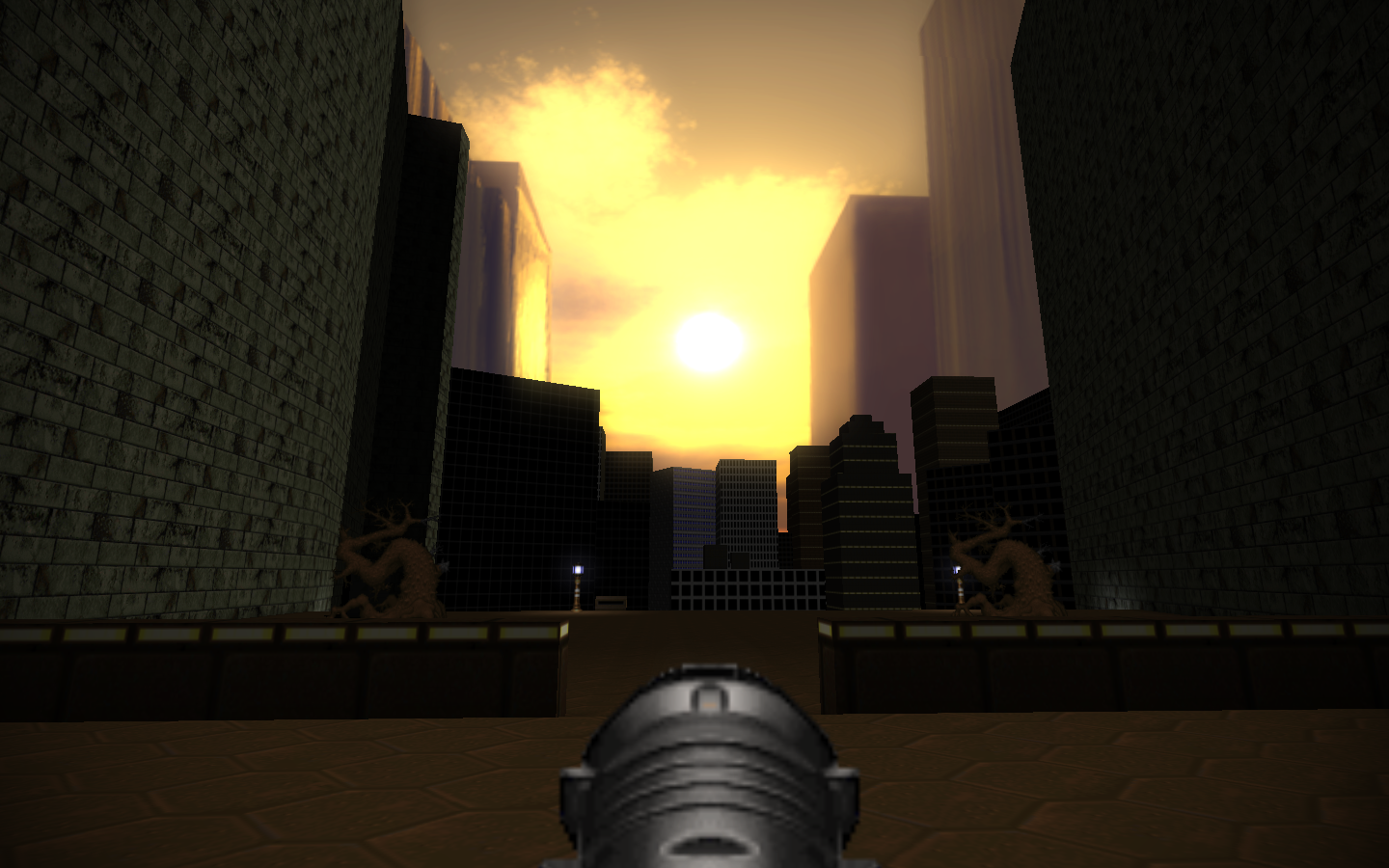 Entering Sandy's City with a rocket launcher, playing in the Doomsday engine. 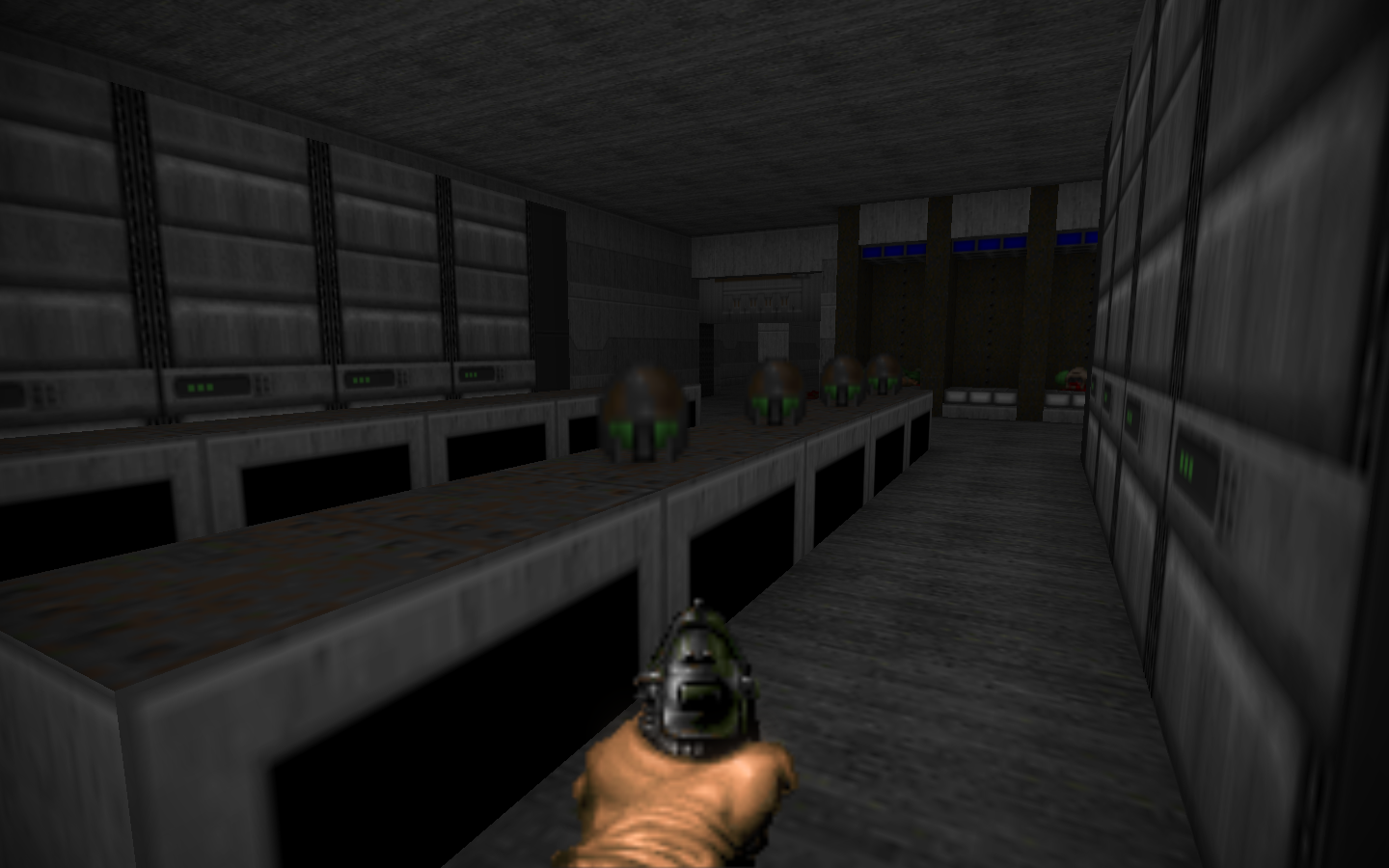 The changing room in the the UAC Peacekeeper Headquarters

HOW IT'S MEANT TO BE PLAYED

Bloodline Megawad is designed to be played with any mod or addon of your choice. Play it with any source port you like, vanilla or advanced. You may turn falling damage on and restart any map empty handed as well. Play on Nightmare difficulty for a challenge or try to play through it with the famous mod Project Brutality on Last Man On Earth and Deathwish settings!

Ultimately you should run through it with Brutal Doom in Tactical > Brutal Realism Mode.

I tested Bloodline with the source ports Chocolate Doom, Crispy Doom, Zandronum, GZDoom, ZDoom, QZDoom, PrBoom+, Doomsday, Doom Legacy and Doom2 (Steam dosbox) on both PC and a few engines compatible on Mac. Only Chocolate Doom and Doom2 (Steam dosbox) crashed when entering large areas in some levels. You can choose to play with different rendering, fog and lightning settings.

Bloodline Megawad and this article is created by Rubber Tunes.

The official music addon is produced by Luigi.

Version 2a. This continues where the first Bloodline ended. You are not sure where to go and why... Perhaps you should just give up and stop playing?!

Version v3k-3, final version of the first Bloodline. The year is 2999. Demons who came to Earth are now allowed to live in quarantine zones. You are a...

Old discontinued version. This is the more easy "walk in the park" version with less monsters and less content in many maps. From here on out I continue...

May 22nd 2020 update. This is the very, very final version. I changed, added and removed a few things in many maps. Check the CHANGELOG for more info...

This was the final version with the official music soundtracks included. Please download version 54. This is a clean vanilla megawad for Doom II. This...

Maps only! Zandronum and online multiplayer friendly. I personally like to add the popular mods Brutal Doom or Project Brutality when I play through on...

Take it slow! I'm doing the same with the sequel...

i keep getting goddamn secrets instead of actually finding the exit.

So you have to make a choice, Space Marine. Enjoy the secrets and be happy about it or keep looking further to your escape...

Gee, I sure do love getting sniped by enemies with exceptional reaction time and night vision from hundreds of meters away

It's called Bloodline, because you are following literally a line of blood.

Indeed. Also it's called Bloodline because it's my "bloodline" of nostalgic gaming experiences since the early 90s. Doom, Quake, Unreal, Duke Nukem 3D, Medal of Honor: Allied Assault and many more games. Memories and experiences of all these and more games are put into my megawads.

Just finished this WAD. A really good balance of difficulty and design. Love the architecture on some levels too. Great soundtrack that goes with the ambience and strangeness of the levels.