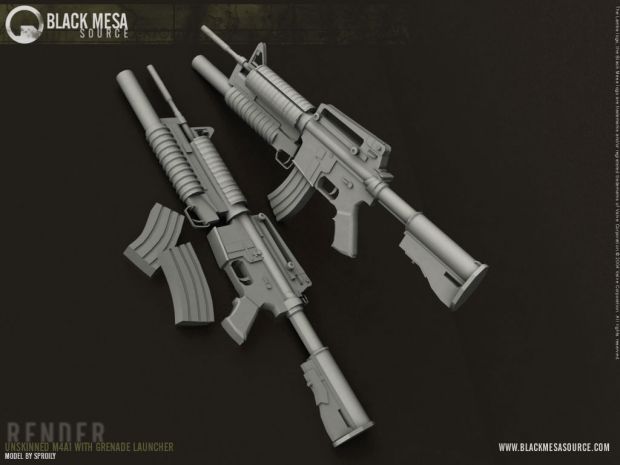 I'd rather see some other rifle than an M4A1, its over done, abused and stuff.
And it wasn't even in HL.

LR300 or something like that, which isn't raped'apart by every single mod in the world.

It was in HD pack, and actually they had ALOT of demands for the m4 , and its a good idea.

Acually that gun was in the game....those army guys or whatever they are.....in the level we got hostiles they used that gun....

No they didn't.
Its in the high definition pack that you get with Blueshift, but thats all.

In The Original version there was going to be XM4A1 with the standard M203 nade launcher but they changed it to the MP5A1.

no, the original gun was the MP5SD6 and the HD was the M4

I think the M4 fits in better, considering there was a grenade launcher in the game, but no possible launcher for an MP5 in real life.

The m4 and the mp5 will be used. They will be an installation option as to which you wish to use.

you guys know that the producers are adding a choice from the mp5 and the M4 in the installment process right?

they're both pretty stupidly flawed. either an m4 that fires 9mm ammo, or an mp5 with a grenade launcher... take your pick. personally, an mp5 that has a launcher taped to it is a lot less pathetic than an m4 that fires 9mm rounds, even if it is considerably common and "standard issue" :D

Im not trying to offend you in anyway but, Well let me put it this way, Youre playing as a nerd in the middle of a nonexistant mesa battling alien monsters that shoot you with either green lightning or a heat seeking hornet gun
with the possibility that youll be chased by small yet abnormally big Insects that explode, all at the same time you teleport to a distant Planet to kill a gigantic Flying All powerfull baby, If youre beef is with reality.....well the game isnt very realistic to begin with, so an Mp5 with a grenade launcher, besides its not like 9mm ammo Decreases
the all over quality of the gun. also its not like the actual soldiers carrying these wepeons stock themselves on 9mm ammo, and The team behind Black mesa source will indefinatley Solve this looming issue, Like theyre actually going to port every little improbability into the Remake?

Uhh... The Mp5 can have a grenade launcher..

^^ Yeah even if you cant use the 203, you've still got the GP25 Launcher and it would prolly be easier to use since it doesn't have a shell to eject afterwards.

By the way, that also exists, although it looks a bit rediculous

Yeah I know it does, I was just saying you have a choice of two different launchers. the M203 & GP25.

Quit bitching about the guns guys, im sure the bms team will make the right decision and won't screw up the game too bad! lol
:)

"No they didn't.
Its in the high definition pack that you get with Blueshift, but thats all."

Hmm... I bought the Half-life high def pack... and i had the M4 in half-life, opposing force, and blue shift :/

Good that the MP5 comes too, i love the original models. I dont understand why Gearbox added new weapons.

And btw, does other original-looking models come, like Shotgun.

All the original weapons will be in there but done up in Source, including both the MP5 and M4. (but as a choice of preferance.)

on hl2files.com i saw a news thing that shows new screens, and theres no mp5 or m4 a1, its a hks with grenade launcher and laser sight like in the smg in hl2

Kudos to who made this, it is a very nice model.

Also, there is such thing as an M4 that uses 9mm parabellum ammunition, but it is far less reliable than an MP5, although in a game I don't think you'd have a gun that jams anyway.

Having 9mm ammo in an M4 would actually suck, as the standard 5.56mm ammo is more powerful thanks to it travelling much faster out of the barrel. The 9mm will travel around 1000 FPS (feet per second), whereas the 5.56mm NATO rounds used normally travel about 3100FPS.

The higher velocity also gives higher accuracy, thanks to the bullet going farther before veering off course. I personally would be perfectly happy if they swapped the SMG for the M4 and kept the M4 with the NATO rounds, and had seperate ammunition for the Glock. The benefit of this would be that the M4 wouldn't suck at killing stuff past the length of my *****, which isn't very far.

Because the origional HL1 weapons were sucky. Mp5 used as an assault rifle? Please. Glocks are also terrible. Do you really see the Army going out on a top secret mission packed with craptacular gear? I don't think so. They'd have AK103's with grenade launchers and high-calibur/accurate pistols with laser sights if they were dealing with a fricking zombie containment mission. I think there should be a second pistol used in Black Mesa: Source, dropped by the Marines. Glock for Security Guards, Five-Seven for Army. As for sharing glock ammo, why's it such a big deal? That was one of the ridiculous, annoying Parts of Half-Life 1.6, and you're changing the entire map designs, why are you afraid of having no ammo sharing? I say just get rid of ammo sharing and get an M4. Half-Life 1.6 had lot's of bad flaws. Why include them in Black Mesa: Source?

It was in High definition pack!!

**** the M4, it's a good weapon, but Marines are equiped with and M16A2 with an M293 40mm GL. I agree with the Five-Seven, that would be spectacular, or at least a Beretta 40 cal. As far as ammo sharing, it will most likely be abolished. In regardes to choosing between an AR and a Sub-Machine gun, why not have them both??? MP5 for close encounters, and an AR so you can reach out and touch someone.

i feel sooo small at this moment

now if it was my job to do so, i wouldn't necessarily keep the weapons the same, just because people want to re-experience all the past glory.

i would just do what works and what would fit best.

by todays standards, yes, some of the weapons might seem out of place, or more specifically, not convenient for the task at hand...

but see if you try to improve EVERYTHING (graphics wise) and keep it just the way it was except for making it look pretty then you fail.

i would be very disappointed to have to play a game that has the same old **** that has just been redone in source, i'd rather see a entire different game, with the same story, some things still the same, but with drastic changes.

bitching about the mp5 with the grenade launcher and m4 with the 9mm rounds is just being stupid, what you should be thinking is, "what weapon would best suit the situation while being realistic and fun?"

when it could be possible that the mp5 is just a stupid gun (not that my beliefs reflect that, i'm just giving an example)

in my ps2 version the grunts have this gun, there is no mp5

Well this argument is kinda pointless just chose the MP5 if you like it or the M4 if you it, it's not the big of a deal.

Good that they've choosen the MP5. I don't like M4 model that much. I also think BM should make a HD model pack. Would be awesome. Yes HD = High Definition.

what would a hd pack for this game be any good, its already hd.