THE MOD IS FAR IN DEVELOPMENT BUT YOU CAN STILL HELP WITH MAKING IT BETTER. VOICE ACTORS ARE ON HIGH DEMAND NOW. IF YOU WANT TO PARTICIPATE, THE PROCESS IS VERY SIMPLE WITHOUT ANY UNNECESSARY FORMALITIES. WRITE HERE ON MODDB OR SEND ME A FRIEND REQUEST ON STEAM.

Black Mesa: Military has been in development for over a year now. When I started working on this project I was alone and focused only on mapping. Thanks to many people who volunteered to help me with the mod, we now have a new team consisting of few members. Thanks to them the mod is expanding. It now has new weapon models, new soundtrack and custom voice acting.

I would like to thank laualamp who was the first person to help me make the mod better. He provided sitting animations for marines sitting in osprey. Then, he helped me with more animations, helped me fix some crashes. Without his help, many things in the mod wouldn't be possible, oh and marines would still be crouching and shooting at each other in that Osprey ! 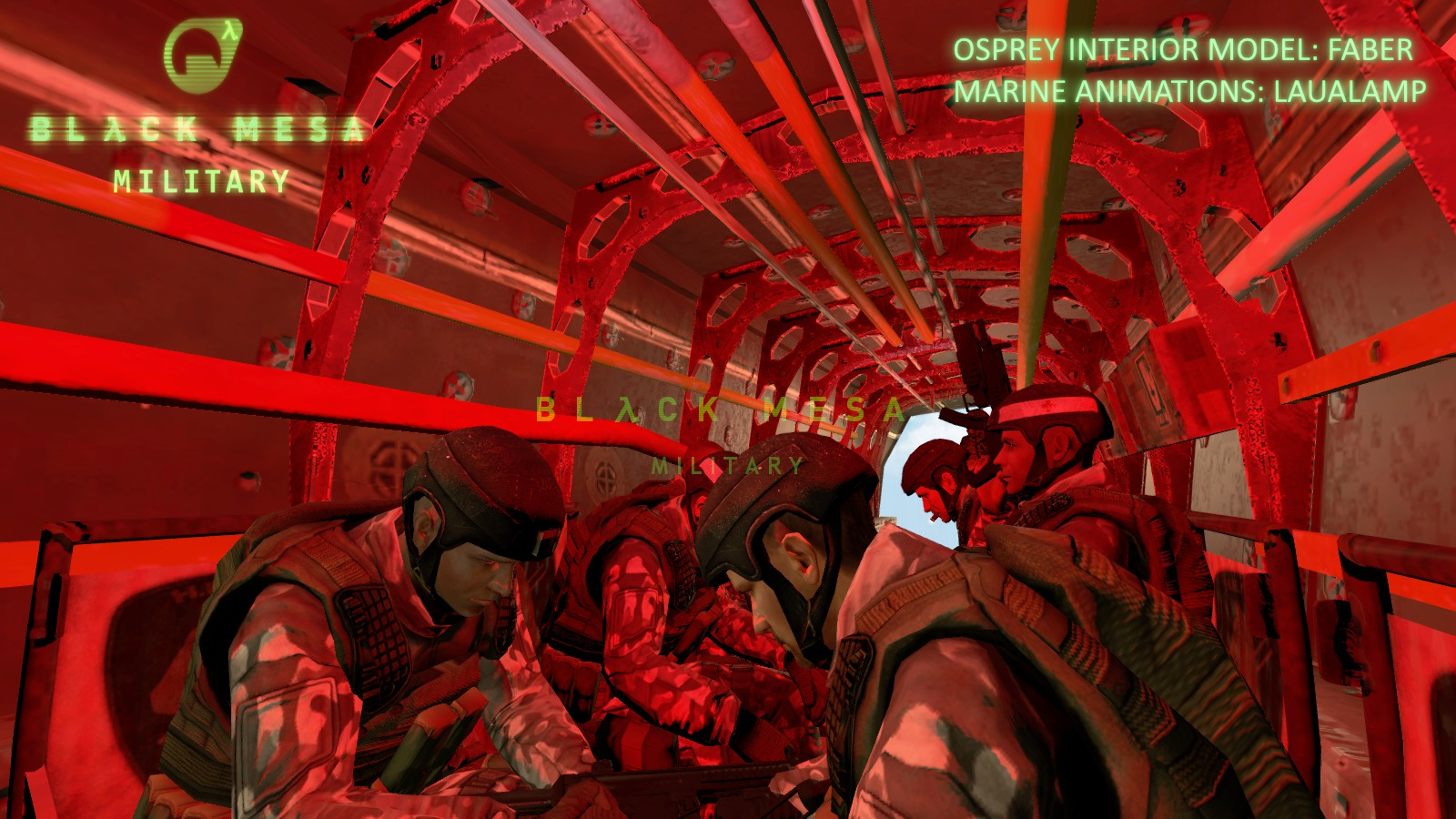 Thanks to Faber you can enjoy this new, amazing osprey interior, new boot camp sequence at the beginning of the mod and custom models for marines and new props. 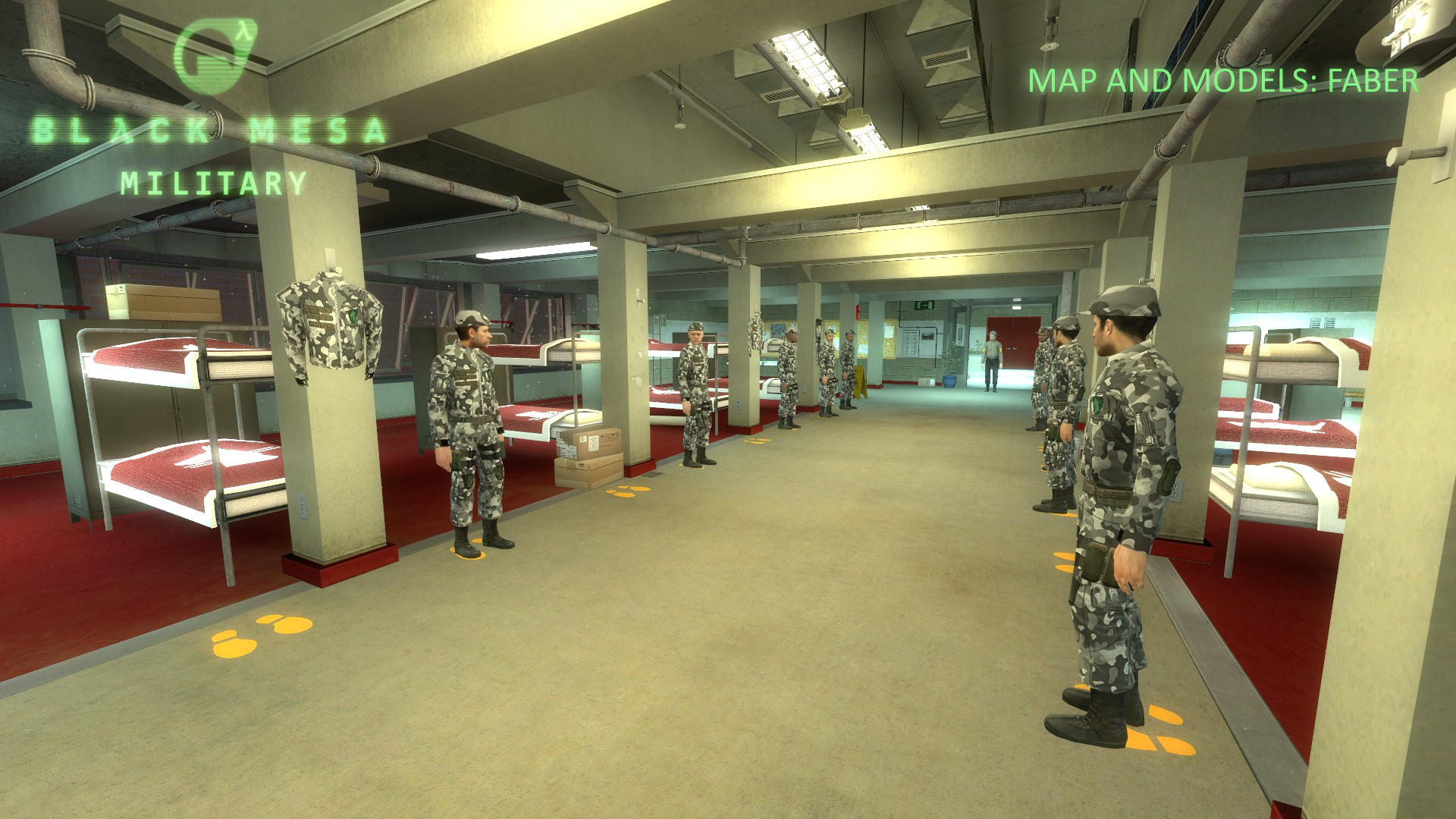 Gurkha was able to model new, exclusive weapons for the mod. 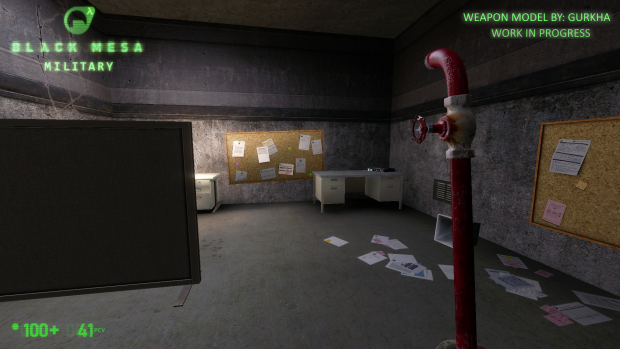 Slaver provided new music for the mod and also a custom voice acting. The voice acting will be expanded in future updates ! I was amazed how well it sounds in the mod.

In the meantime I made new maps for chapter 6 "Newcomers", it features arrival of Black Ops to the facility. Steven Mills must push trought their outposts to reach marine squads.

New updates are on the way, this is not the final version of the mod. So stay alert gentlemen!

Hello everyone! I am happy to announce that the very first version of my modification for Black Mesa is complete and released! It took me a while to make...

Hello everyone, I'm hecumarine and today I would like to introduce you all to my new modification called Black Mesa: Military.

The fourth version of the mod is released. It covers the seven chapters of the upcoming full release. The following playable chapters are: Arrival, Dangerous...

*******OUTDATED VERSION******* The third version of my mod is released. It covers the six chapters of the upcoming full release. The following playable...

*******OUTDATED VERSION******* The second version of my mod is released. It covers the five chapters of the upcoming full release. The following playable...

*******OUTDATED VERSION******* The first version of my mod is released. It covers the first three chapters of the upcoming full release. The following...

are you still working on this ?

I do hope that this will be updated for the 1.5 Version/Definitive Edition of Black Mesa someday. Especially since the Boot Camp has security guards instead of Marine personnel and drill instructors, and some of the cars are shiny or there are missing textures and errors with some of the models. Also, there are some Marines with invisible shotguns when you arrive at Black Mesa and apparently Gordon Freeman is now a security guard so yeah, you might wanna fix that.

Any new article or a beta version coming up this year ?

Do you still need a voice actor, I hope I can do some for this mod

I don't know if your still reading this, but I think you shouldn't make the players kill the Scientists and Guards. The original didn't do that, and used the perception idea where the scientists THOUGHT they were killing everyone, where in reality it was only certain units doing so. Just like everyone was an Otis to the Marines. By having the player kill the scientist makes the player feel like the bad guy, when really Adrian Shepard was the good guy and so were the men around him. The Black ops were the bad guys really.

Just saying the beginning killing civilians turned me off of this game, and any vet would tell you the same....

I guess you didn't pay attention the Opposing Force intro, the guy who was giving orders couldn't finish them because of the attack of Xenian ship called known as mantas. Of course Shepard's unit didn't kill scientists and guards because they didn't know the orders.

This isn't Opposing Force and who said we are playing as a good guy?

Maps have a problem, but there is a good PERSPECTIVES in this modification. I also saw interesting ideas created in scripts. For the novice creator, the project is promising