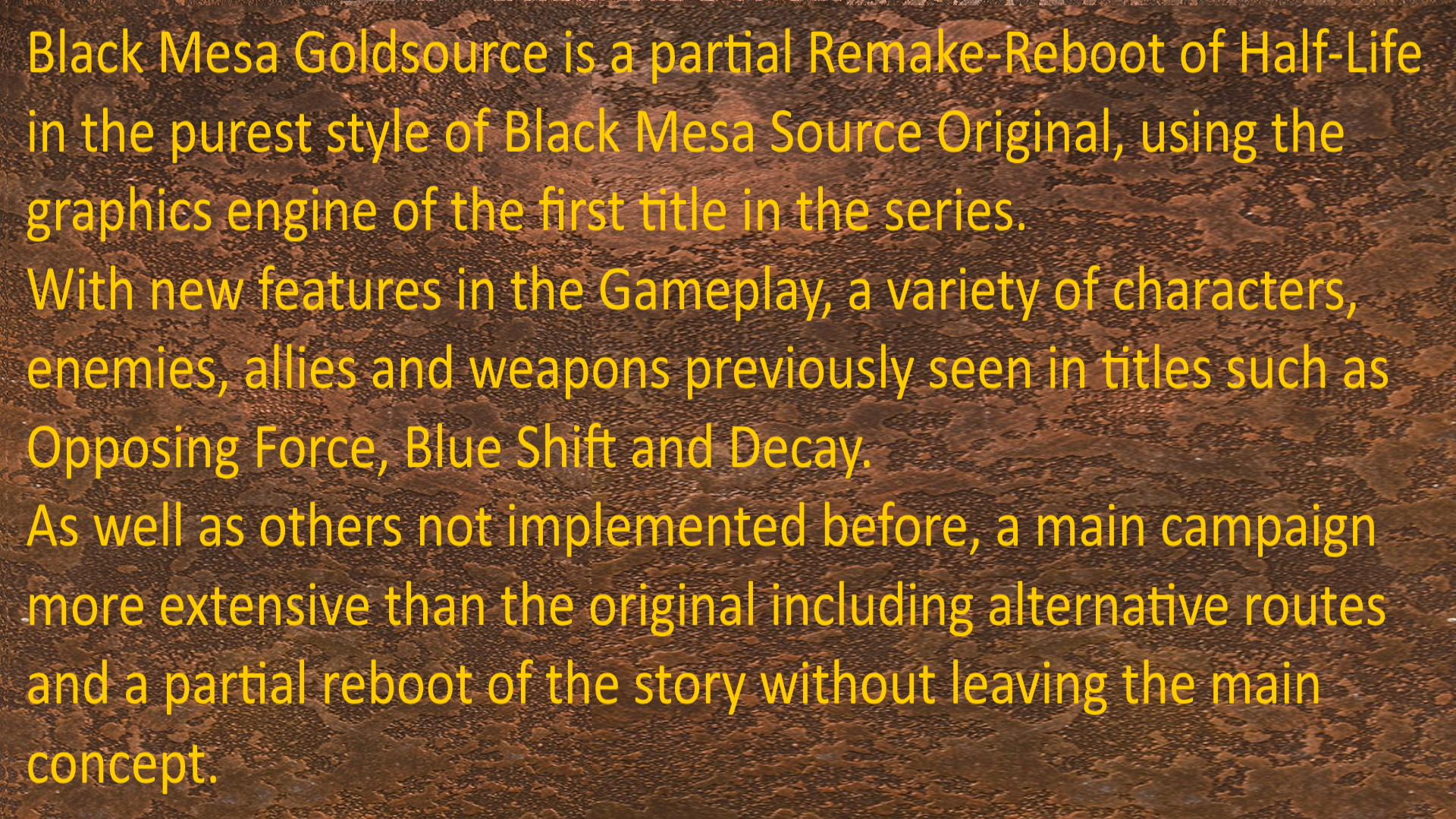 The story begins on March 22, 2002, with the arrival of Dr. Gordon Freeman at the Black Mesa Research Facility, after accepting a job as a research associate.

Passing through a vehicle inspection and identification (Entrance Pass) at one of the main entrances (Access Module A-12);

Allowing you to enter the facilities through a vehicular tunnel, which leads to a parking complex.

Going through certain areas (in which he was able to observe the work routine of some workers) he reaches one of the designated parking lots (EP-7), where he leaves his vehicle, takes his luggage and goes to one of the elevators that will take him. to the main reception.

Once there, they welcome you, in addition to asking you the reason for your visit and asking for your documentation;

By granting them Gordon and corroborating the information, they indicate that you must make a registration as a visitor, in addition to going through a second review (including your luggage) for security reasons;

After completing the request, they ask him to wait for Dr. Isaac Kleiner (his friend and MIT mentor, who recommended him to work on the site) who they call through the public address system, so that he will direct him to the administrative area to perform your employment record.

After a few minutes Dr. Kleiner arrives at the place rejoicing to see Gordon, whom he welcomes and accompanies, both going to the main station of the transport system to take a transport that takes them to the administrative area.

Arriving at the tram station, both continue chatting while waiting for one of the trains to arrive at the place;

During the journey, Dr. Freeman was impressed by observing the enormous research facilities, while his friend Dr. Kleiner suggests that he listen to the train's public address system to be more informed about the safety measures, recommendations and where they are going. going.

This automated train is provided as a courtesy and security service to Black Mesa Laboratories employees.

The temperature at the Black Mesa facility remains a pleasant 20 degrees.

Arriving at his destination after the journey, Gordon continues listening to the train's public address system.

After arriving at the place, a security guard approaches the train to verify the identity of both, allowing descend them once their identities have been verified.

Opening an access hatch and after going through a verification in a room, they allow both to enter the administrative area (Sector D).

Crossing a huge office complex until arriving at the personnel registry office, where, after greeting and welcoming Gordon, they ask the latter for his documentation and entrance pass to the facilities to begin with his labor registration .

Giving them Gordon, while they suggest you take a seat since it would take a long time to complete your work registration.

In the meantime, please take a seat, as it will take us a while to complete your employment registration.

Immediately afterwards, Dr. Kleiner informs Gordon that he must retire to carry out his work, not without first introducing him to a work colleague, Dr. Eli Vance (who happened to be passing by), asking him to please accompany Gordon to the complex of rooms once his work registration is finished (to which the good man agrees since he was also going there), saying goodbye to both and finally retiring.

Meanwhile Dr. Vance begins to ask Gordon some questions to break the ice, which ends up turning into a chat within minutes between the two.

Having a good time, they inform Gordon that his work registration has ended, giving him his work identification in addition to assigning him a bedroom "El # 309" in the complex of rooms on Level 3 (Place where he will stay as of this day in forward) indicating how to get there, in addition to that as soon as he has settled in, he goes to the training center in "Sector A", to begin his training in the use of the Mark IV protective suit.

I provide him with his work identification and room number.

To get there, go to the nearest tram station and wait for a shuttle to take you to level 3.

Finally, Doctor, as soon as you have settled in, go immediately to the training center in Sector A to begin your training in the use of the Mark Iv protective suit.

Have a great day.

Starting up, both scientists and now colleagues go to the nearest station of the transport system, where they wait a few minutes for a transport to arrive.

Moments later a train arriving, which they board starting their journey to the complex of rooms on Level 3.

During their journey, the conversation between the two continued while the public address system again gave security measures, recommendations and place

through which they were passing.

Once arriving at their destination, both scientists get off the train and then identify themselves in the surveillance module, allowing them to enter and in turn welcoming them to the place where they will reside.

On the way to his room Gordon observes, in addition to the rooms, different areas such as libraries, entertainment areas, laundries, cafeterias, a swimming pool, basic goods stores, among others.

Stopping briefly on the way, Dr. Vance introduces Gordon, his wife "Asían Vance" and their 4-year-old daughter "Alyx Vance" (who was already waiting at the entrance of her bedroom for the arrival of her husband holding her in her arms. her little daughter)

Asian I want to introduce you to Dr. Freeman.

Resuming the tour they finally arrive at the designated room, Dr. Vance saying goodbye to Gordon and returning to her family, but not before thanking Gordon for accompanying her.

Come in and make yourself comfortable.

It was nice meeting you.

Moments later Gordon enters his room using his access card to it and settling in his new room.

This article is designed to answer questions from users about the development and features who want to know about the project in more detail. So if you...

Isn't dead. I know one of the modellers don't have pc right now. Just paused for the moment.

i cant wait play this mod,faster!

We still ask for people to help us develop the mapping and coding, so as soon as we get more stable support we will upload a demo in about a year or two.

We are not dead, we only need help in the following departments: Codding, mapers, moders, textures and sound.
Urgent on encoders and mapers.

that's basically everything man, it's like saying you dont have a dev team

Moddb.com developer team are back
why wont you fuse your mod with theres

I've already tried it, but apparently Pentiuname made the decision to just continue with his project because his main objective is to recreate only the original black table without adding any of the new features that I am planning to include in my version of the original Black Mesa demake. 2 projects with the same purpose but with different ideas at the same time.
What I need is help, a lot of help to be able to carry this project forward because only 2 people support me for models.
I urgently need codding and mapers to help me develop this project.