Initially developed and released by Gearbox Software in 2001, second Half-Life add-on, Half-Life: Blue Shift is a return to the Black Mesa Research Facility and another look at the Incident's consequences from the eyes of Gordon Freeman's best friend - Barney Calhoun.

In 2012, Crowbar Collective has delighted Half-Life fans with release of the magnificent Half-Life remake, but there are still no released remakes for add-ons. This is when we are coming in - HECU Collective are developing the Black Mesa: Blue Shift - a free remake with use of Black Mesa resources and style. We will try to stay as close to the original Blue Shift and Black Mesa as possible. Our mod will be releasing partially, chapter by chapter, so those who are not patient for the full release will finally have something to play!

You can download three chapters of the remake here:

There will be our custom stuff you can install on top of our mod:
Vanilla-styled Logo

Greetings Dear Friends. Quite a lot of time has passed since the last news from our team, but the work continues and our silence was part of a grandiose plan, namely: release of a new article on the anniversary of the announcement of the Black Mesa: Blue Shift project!
That's right, a year has passed since we revealed our plans for our future development, and for a year we have been regularly making content for it. During this time, 3 chapters were released and, as time has shown, you really like them, so we are excited to present screenshots of the following: 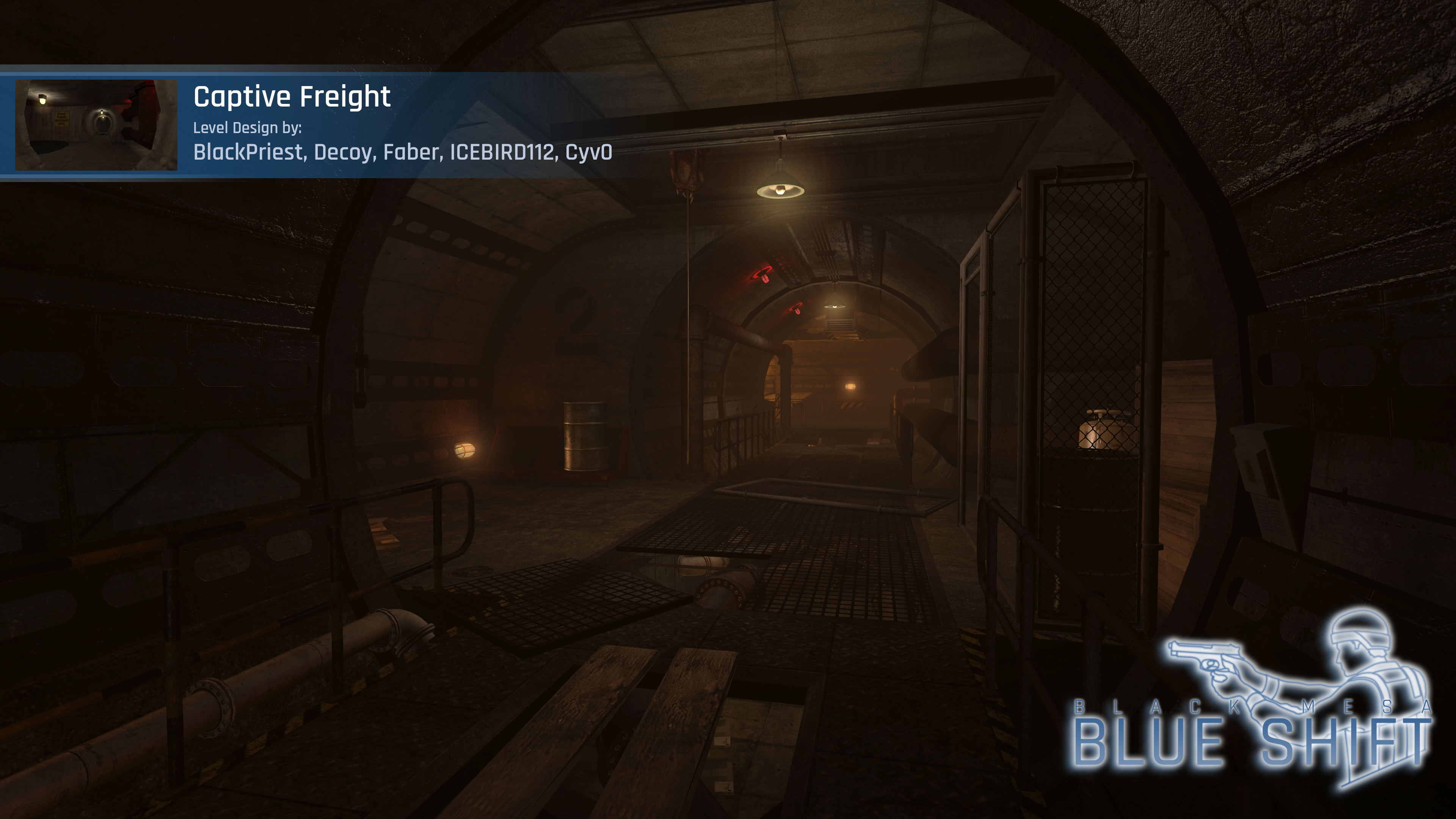 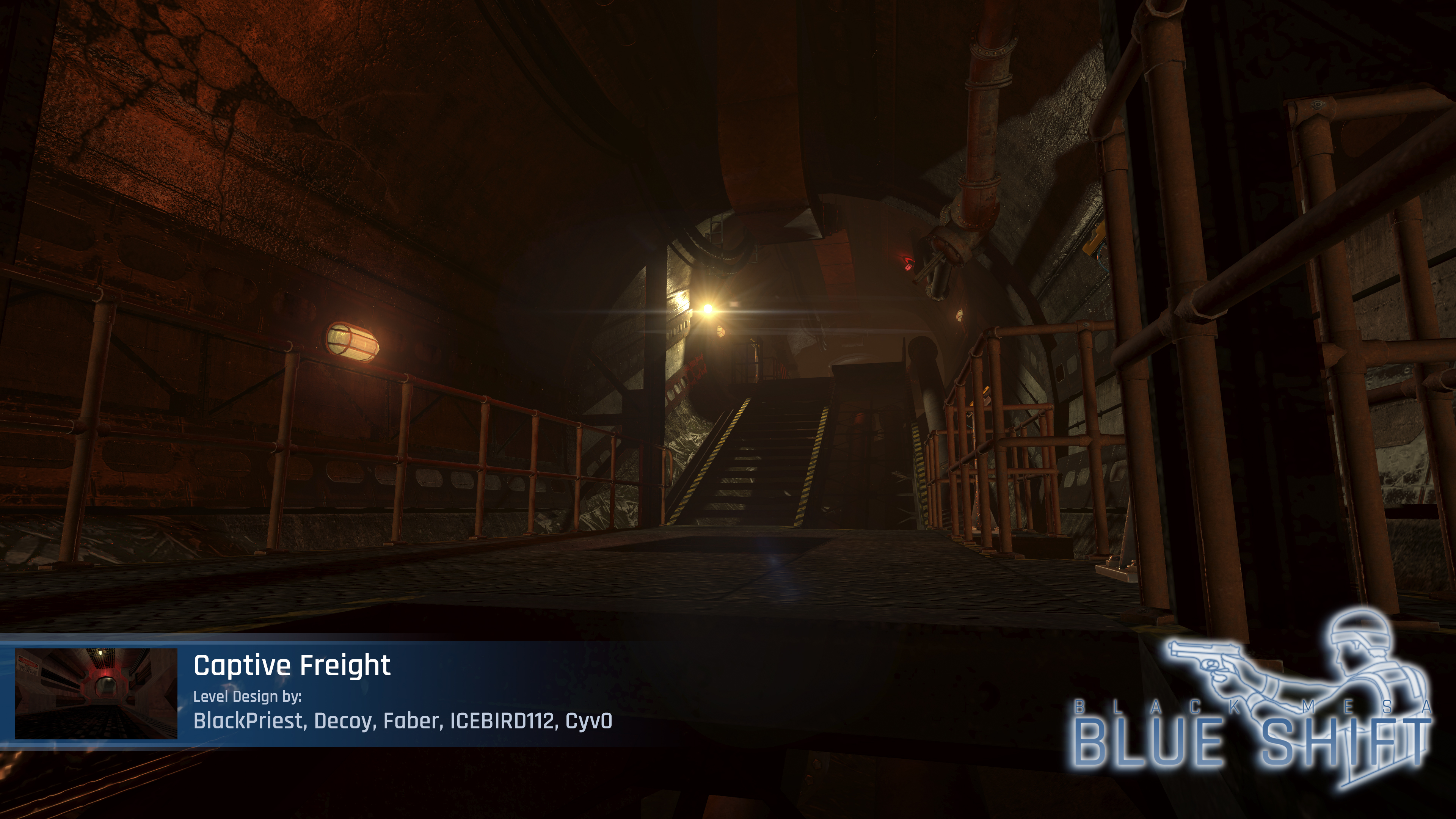 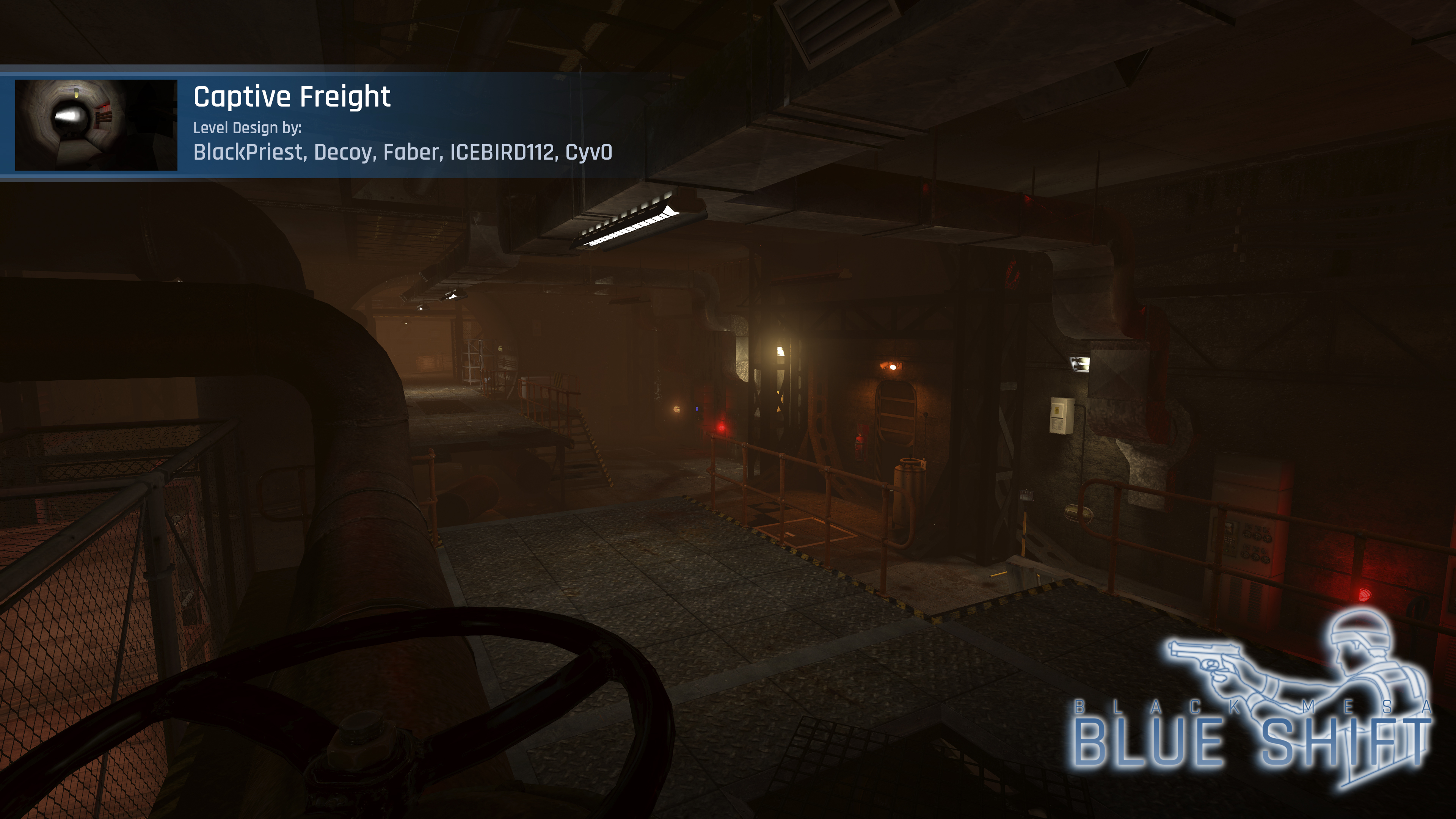 Our team is also working on new models that expanding or completing the existing content of Black Mesa itself, on the one hand we are trying to add variety, create models in the style of the original BS and generally add new ones, these three values ​​​​must be balanced for us, so that the overall the picture was not out of the scope of fantasy. 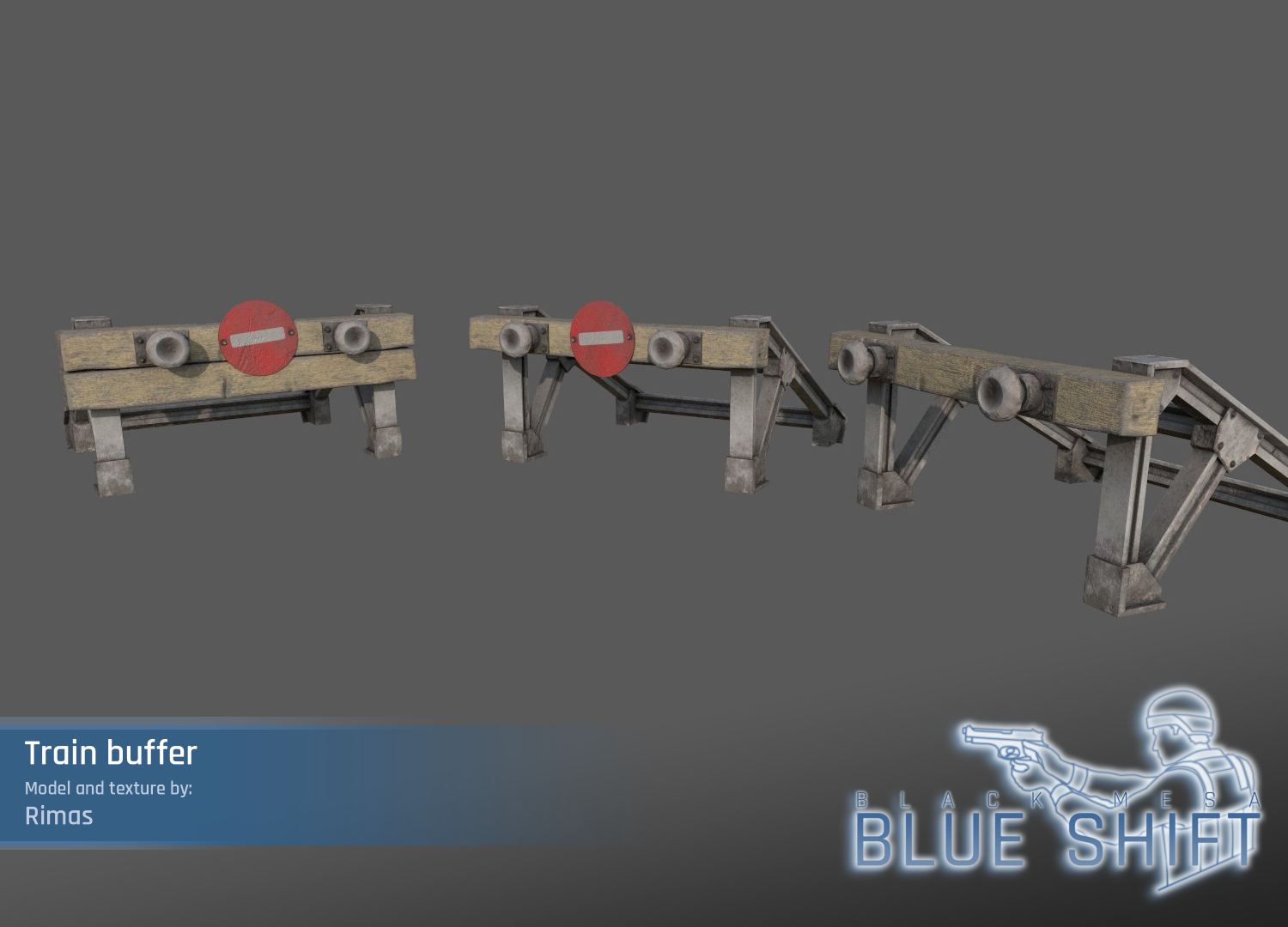 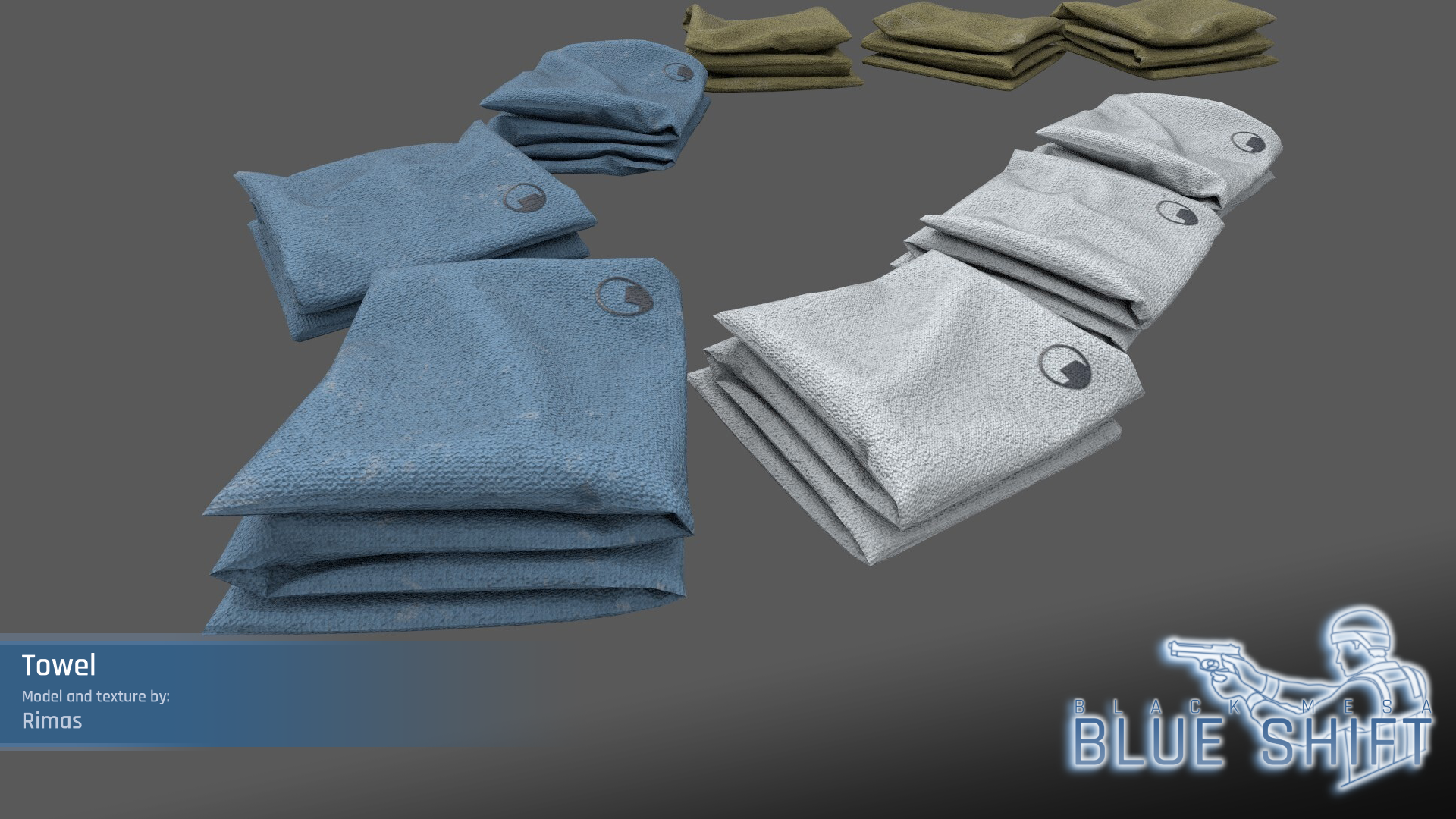 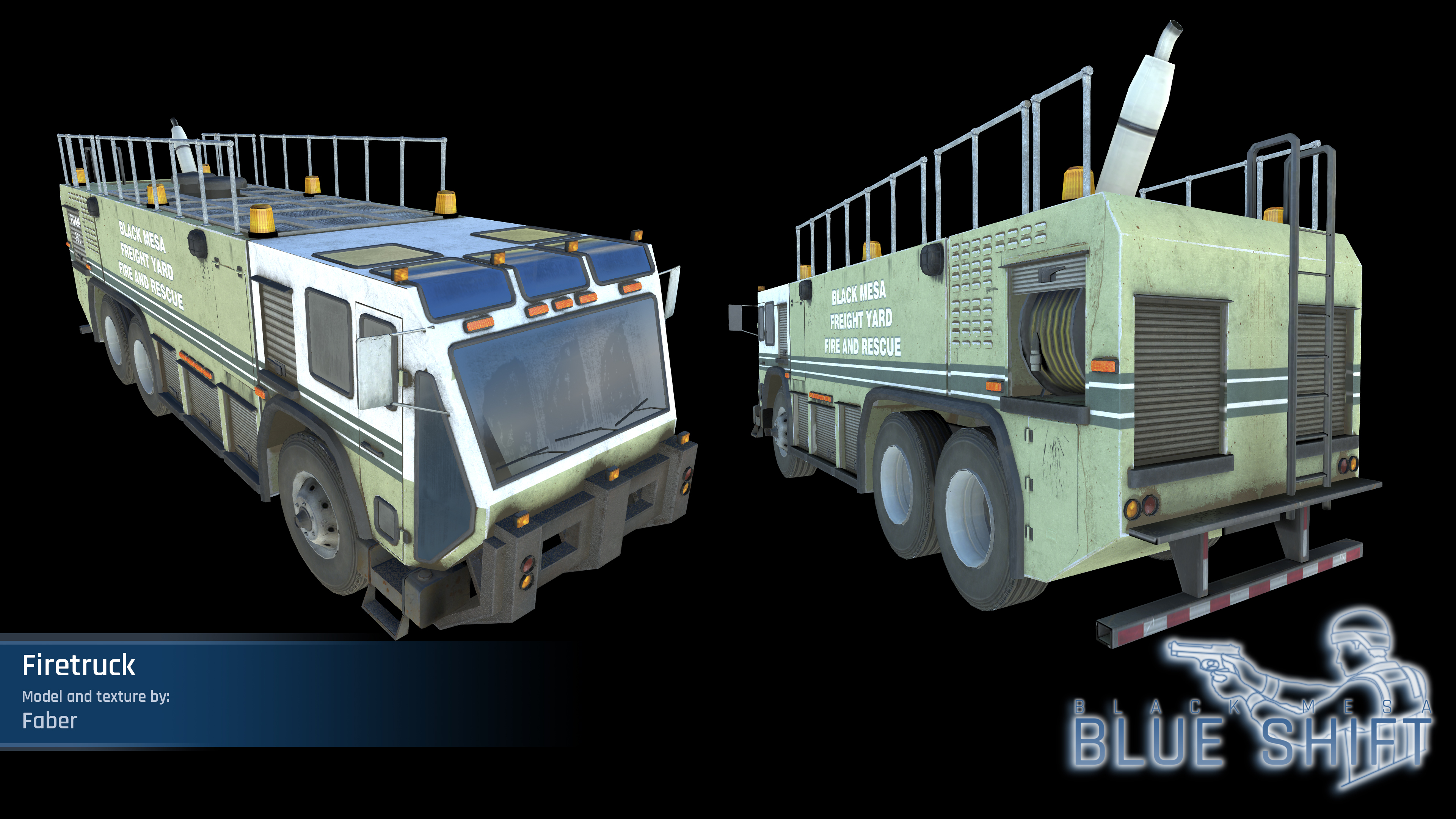 Previous chapters are still getting new and better content: old animations are being improved, and Faber made the impossible - we're getting the working mirror in the locker room!

Also, this is a new zombie model, that was shown on the patreon some time ago. 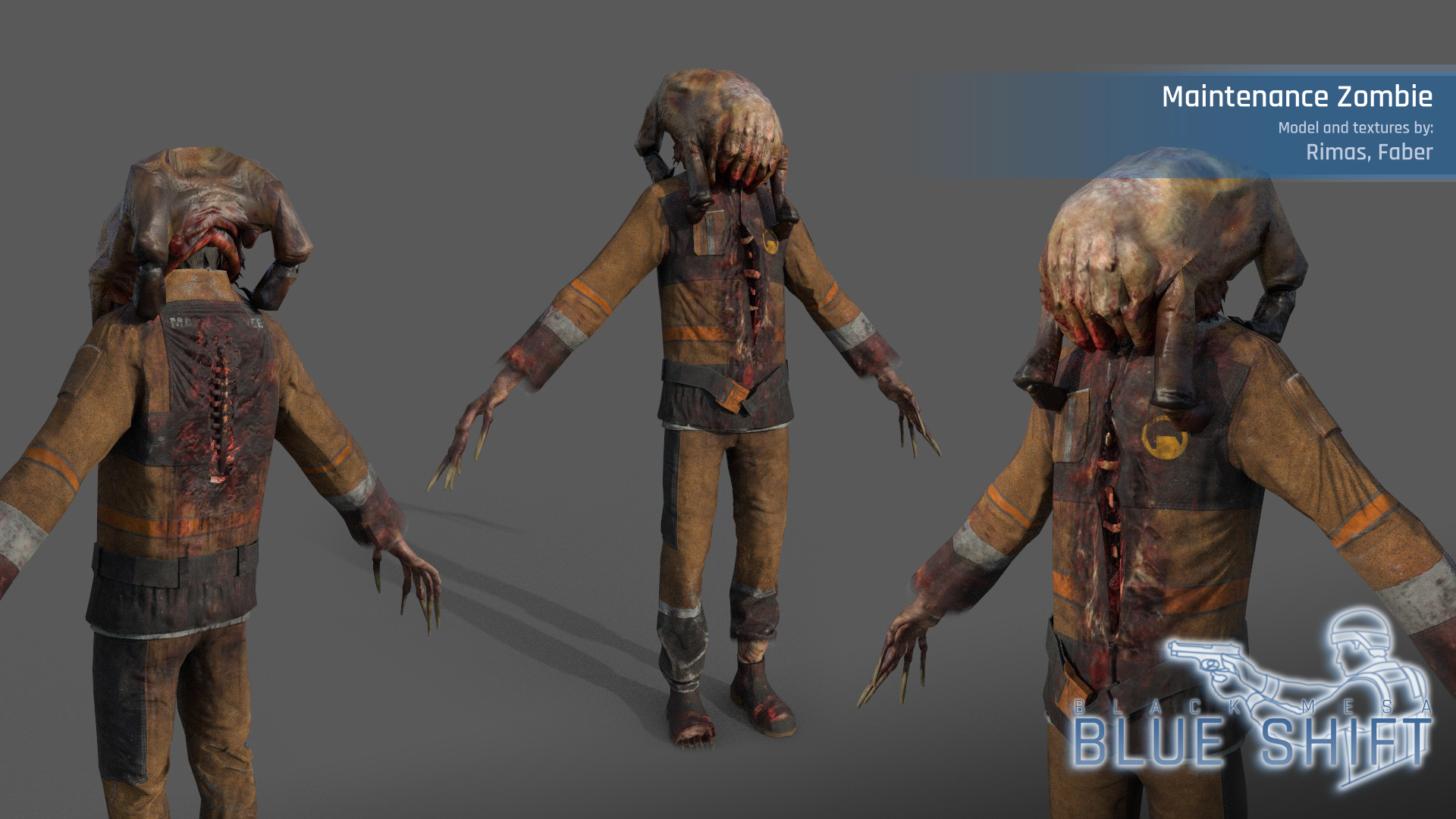 The development stage when we had the opportunity to take a short break is coming to an end, by spring we expect to pick up the previous speed in creating the mod again. We’ll work until we please the entire gaming community with a new chapter, and we promise that it will be bigger and much more interesting. Stay tuned for our news and thank you for your attention!

We have our Discord server!

The third chapter of the remake, Duty Calls, is now released!

Hello everyone! In this article we want to show you the current development progress of the third chapter, "Duty Calls", and few other interesting updates...

The second chapter of the remake, Insecurity, is now released!

It's Half-Life: Blue Shift's 20th anniversary! Because of that, we are giving you some info, screenshots and more!

The THIRD chapter of the remake, Duty Calls, is now released! OPEN FULL DESCRIPTION FOR THE NEW INSTALLATION INSTRUCTIONS!

The first chapter of the remake, Living Quarters Outbound, is now released! CLICK "READ MORE" FOR THE INSTALLATION METHOD.

I really like the mod so far. It’s definitely an amazing remake of Blue Shift. I can’t wait to see how you guys reimagining/remaster the rest of the game.

Kind of a weird idea that I’m not entirely sure if it works, but when you remake Xen do you think there’s any chance of transforming the caves into an Antlion nest (basically just a condensed version of the Antlion caves in Episode 2, but in Xen)? My reasoning for this is it would be a cool way to shake up the gameplay by adding in some new enemies to Black Mesa, and because crawling through continuous caves filled with headcrabs just isn’t very fun. This would be a great way to show that Xen is home to a lot more than just the aliens in the first game, and would make the chapter stand out more from the rest of the game. There could even be an Easter egg where you look through a small hole in the wall, and see the cut Antlion King from HL2. Even if you don’t do this I can tell that Xen will still be really cool with all the new Black Mesa Xen assets. Along with the AGrunts jumping around the place, and HEV zombies nearby that abandoned teleporter.

Fantastic work so far. If there's one thing I don't like it's the "cutscenes", to be specific, the one when you pickup your glock. Knocking on the door wasn't too bad as it briefly takes control of your camera, but I still would've preferred if the knocking didn't exist mainly because Blue Shift didn't require you to knock. One last thing is that I dislike that the crowbar has it's firing speed reduced, it just feels a bit slower when trying to break stuff.

So black mesa is half life 1 remake , blue shift remake with barney callhoun and do you know where i can find opposing forces remake ?

I think they think launching or in June. or they want to completely finish the game by bringing the other chapters and we really have it ready for 2023 nope. but he also asked me the same thing and his followers tell me to be patient and such. and I'm sick of waiting but you can see a new screenshot of the gameplay they posted. in lamdageneration.