Today, the Battlegroup42 team is greeting the community with a special news: We are offering you version 1.8 beta for download! Since we don't have enough beta testers to thoroughly test this extremely vast version with 171 maps, we have decided to make the beta public. Now we are hoping for a lot of feedback and bug reports, and of course our Battlegroup42 server is running this build from now on. 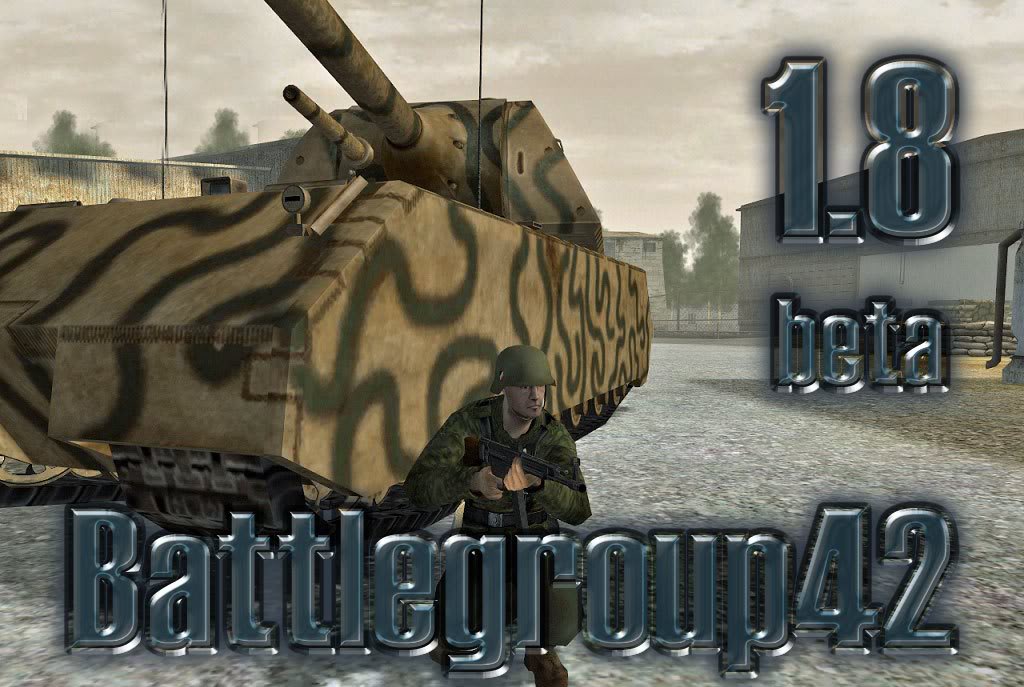 As you know, we wanted to release the final version 1.8 of Battlegroup42 prior to Christmas, as a gift to our fans and those who might become fans. But since our mappers were unstoppable in their productivity, and with our modellers still having some unfinished highlights up their sleeve which definitely have to be in the mod, we decided on a compromise: 1.8 public beta. With that we're hoping to gather enough testers to test the maps regarding balancing and gameplay in online multiplayer mode. After evaluation of all bug reports a final version of Battlegroup42 is planned. By that time, with a little luck, we should be able to present you first impressions of our Unreal engine based development.

Talking about presentations: For BG42 1.8 beta, there's some new candy too - besides some new maps which we're not previewing here, there are two new models: The gigantic Panzerkampfwagen VIII "Maus" and the, in comparison, tiny Flakpanzer I. "What, a Maus ? Didn't they always resist in creating that thing for Battlegroup42 ?" some of you might say right now - and that's right. But our modeller GeronimoGer started a model of this tank some time ago which at first was to be used as a static
model only, but never finished. Our modeller RuppDee took care of the model, finished it and created the textures.

At the same time SargeSurfat created a map called "Mouse Roars", a special, half-fictive map only for this super tank. It was modelled after the "Heeresversuchsanstalt Kummersdorf" (army testing and proving ground) and is about its conquering of the Soviet Army. During its defence the Germans used not only a lot of captured vehicles but also their heaviest tanks - King Tiger, Jagdtiger and two "Maus".

The second model we're showing you today also comes from our pool of unfinished models: The Flakpanzer I was originally created by Koricus, and now made usable for Battlegroup42. Kraetzer finalized the texture and changed our 2 cm Flak 38 to fit the tiny hull. The Flakpanzer I was an improvised vehicle - it was built when the need for mobile anti air defence arose during the Battle of France. In 1941 the Fla.-Btl.(mot) 614 was equipped with this tank and in the following used on the southern part of the Eastern Front - mostly in costly battles against ground targets. The Battalion was completely annihilated during the Battle of Stalingrad. You can find the Flakpanzer I on some of the Eastern Front maps between August 1941 and January 1943.

This concludes today's news, the download links for the version 1.8 files are posted below - again five
parts which have to be installed in order. For bug reports we've set up a topic on our website's forum at www.battlegroup42.de. Please post your bug reports ONLY there so that we won't miss anything.

Please follow the install instructions in the Battlegroup42 forums.

OTHER:
- many new / modified skins
- some new sounds and effects