RSS Battlegroup42 1.8 - Novelties on land and at sea

It's time again for a news update on Battlegroup42. As you know, we're working hard on finishing version 1.8 - since it will be our last release based on Battlefield 1942, we want to make sure to make it as good and bug-free as possible. Even in the final stages of development we're still able to exchange old vehicles with new ones of much better quality or add even add completely new content to close existing gaps. Today, we want to tell you about this.

Let's start with the American tank destroyer M10 Wolverine. The model used in BG42 was the original vanilla model, which simply didn't meet our quality requirements, was replaced by a far better detailed and textured model from Koricus' workshop. The M10 was based on the chassis of the M4 Sherman tank and armed with a 76mm cannon in an open-top turret. It first saw combat in Tunisia in the year 1943, and it played a major role during the battles on Sicily, Italy and later in France. The M10 was not only used by the US Army, but also by British and Polish troops, the Free French and Russia. Over time, the 76mm cannon proved to be insufficient at long range against the new German tanks, especially the Panther. Therefore, the British upgraded their M10s with the highly effective and powerful 17pdr cannon and re-named this version to "Achilles". The Americans upgraded the M10 with a 90mm cannon in a new turret late in 1944, and called that new tank destroyer the M36 Jackson. In Battlegroup42 the tank destroyer can be found on a lot of maps, so we're especially happy about this quality improvement. 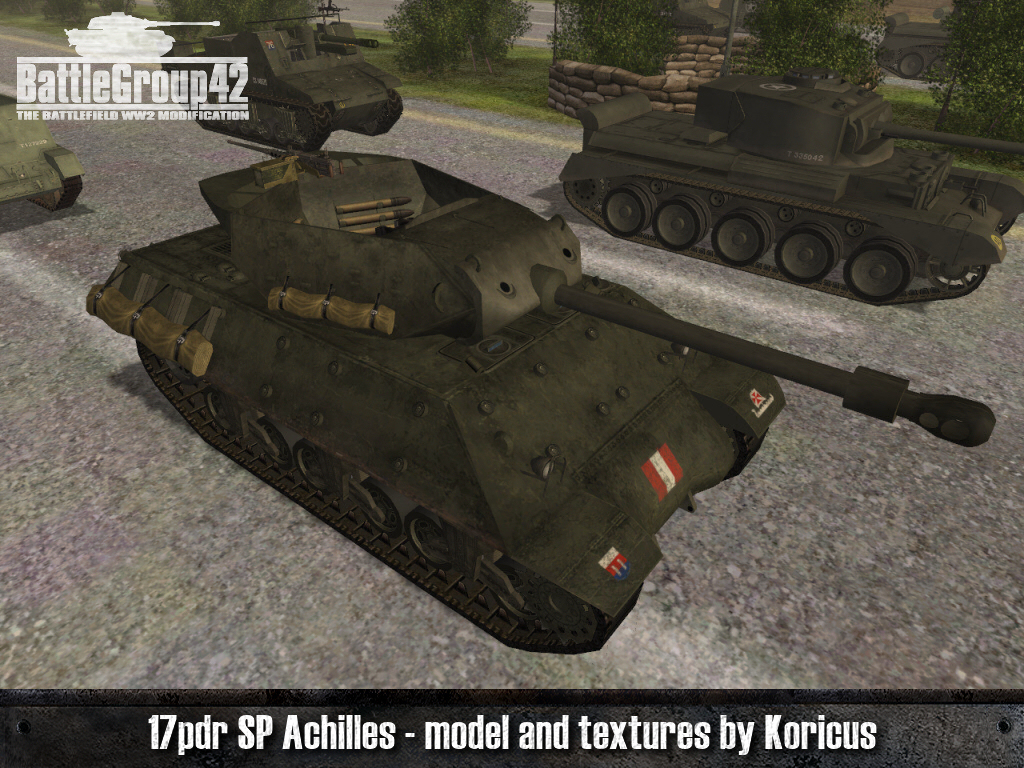 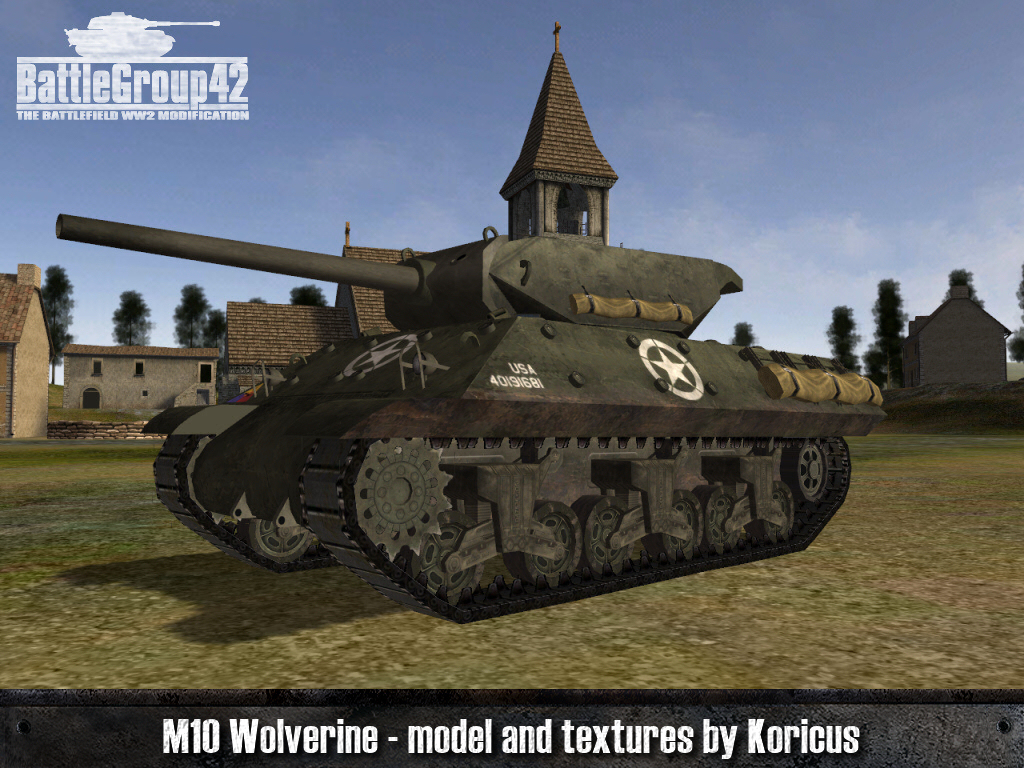 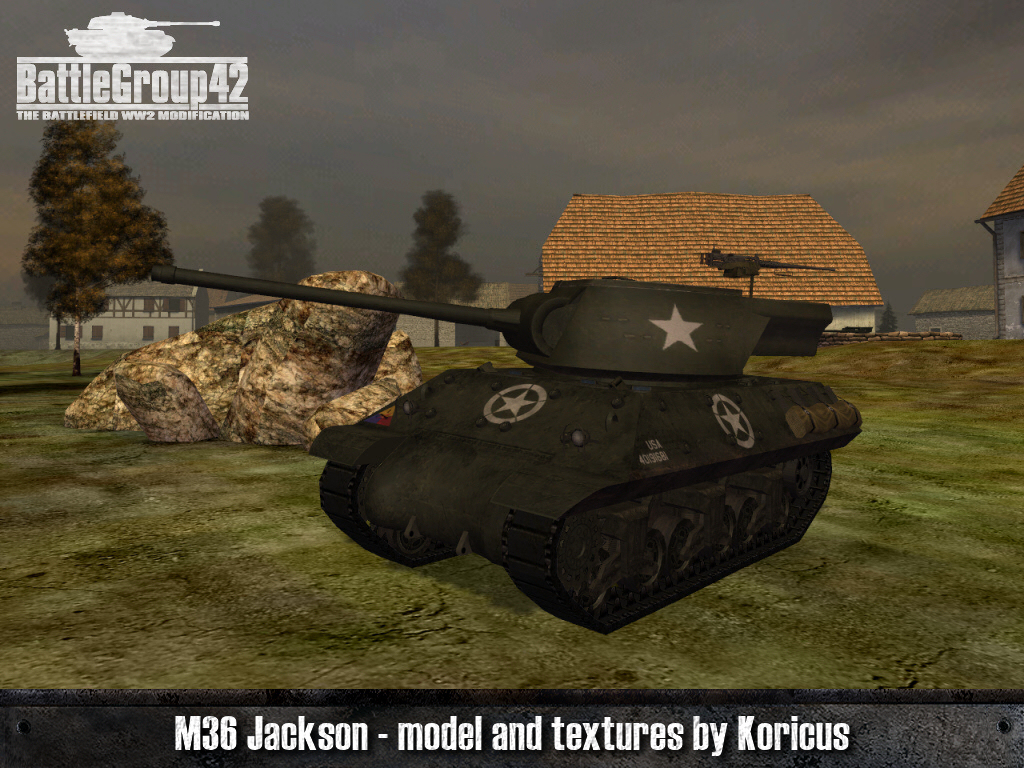 Much the same applies to the American CCKW GMC 6x6 2½ ton truck, which was often simply called "Jimmy" by the soldiers. It was one of the work horses of the US Army, and was also used in large numbers by allied forces. We've replaced our several years old model with a new, beautifully textured and detailed model from Koricus. In Battlegroup42 the Jimmy not only serves as a troop transport, but also has a repairing function for allied vehicles and ammo re-supplying capability. 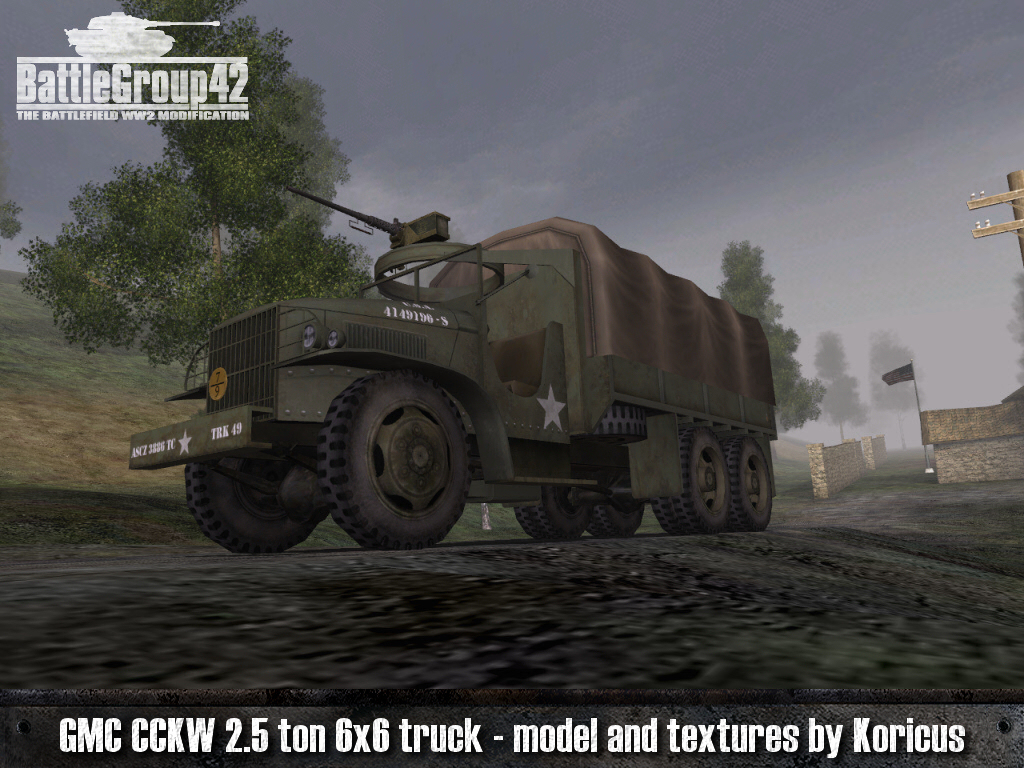 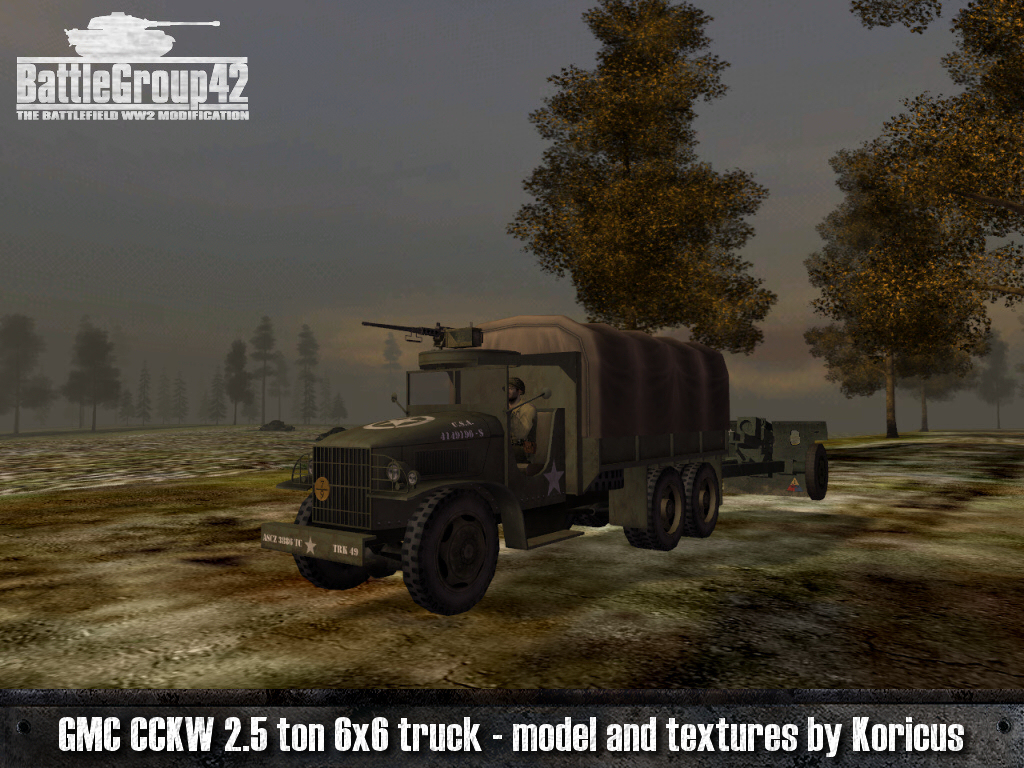 Now we're switching from land to sea, since we're about to present you a special novelty: Our naval expert Cabrio delighted us with a British escort carrier of the Attacker class. Starting in 1943, these ships played a major role in the convoy battles in the North Atlantic. From its flight deck fighters, recon aircraft and anti-submarine aircraft started their missions against German submarines, torpedo bombers and long range recon aircraft, thereby significantly increasing the convoy's freighter protection. Starting in late 1944, some of the eight ships produced of the Attacker class, were used as strike carriers against the Japanese during landing operations in the Pacific. In Battlegroup42 there are two variants, which differ in their aircraft complement according to their intended role: An "escort" version with fighters and anti-submarine aircraft, and a "strike" version with fighters and bombers. 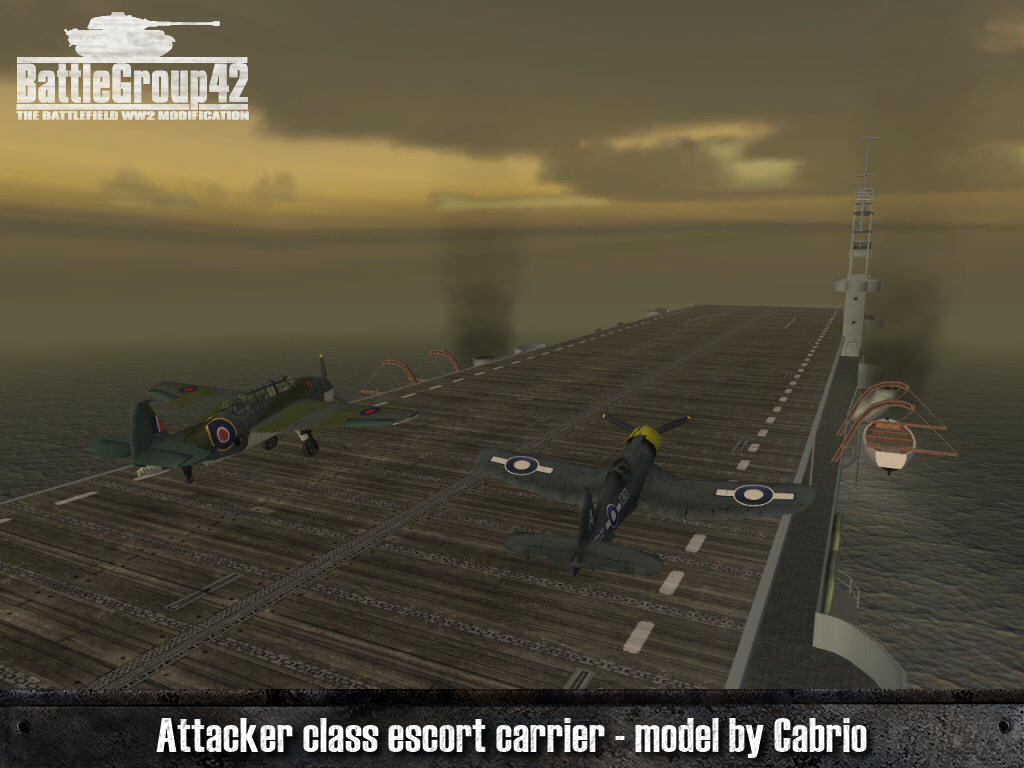 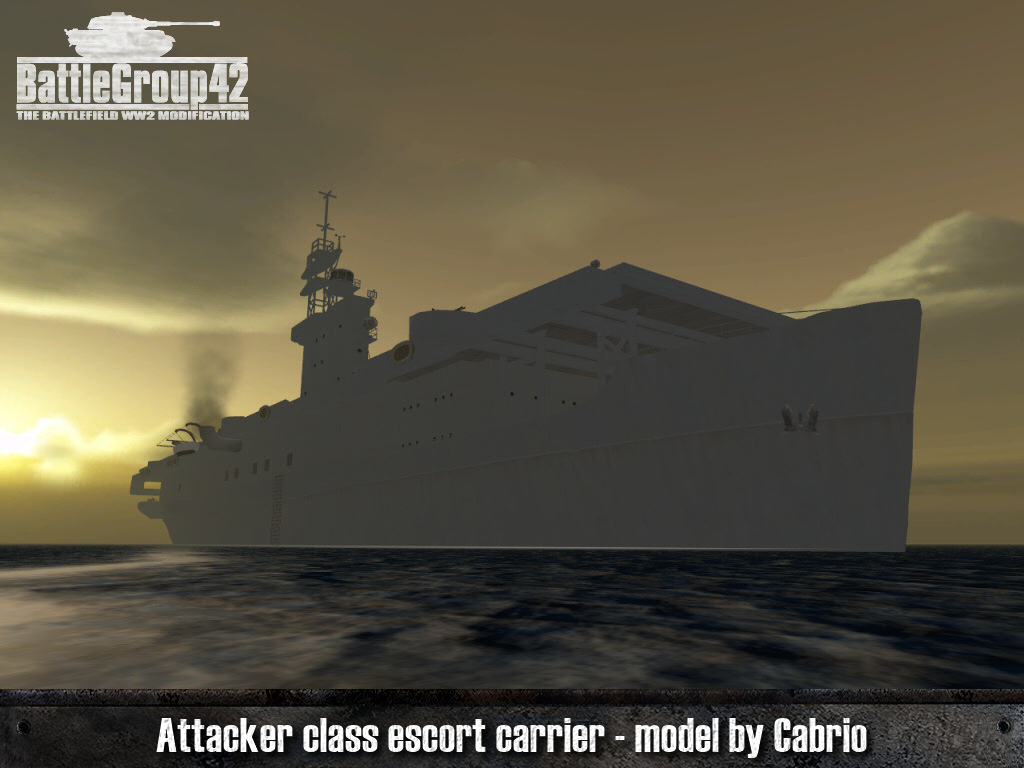 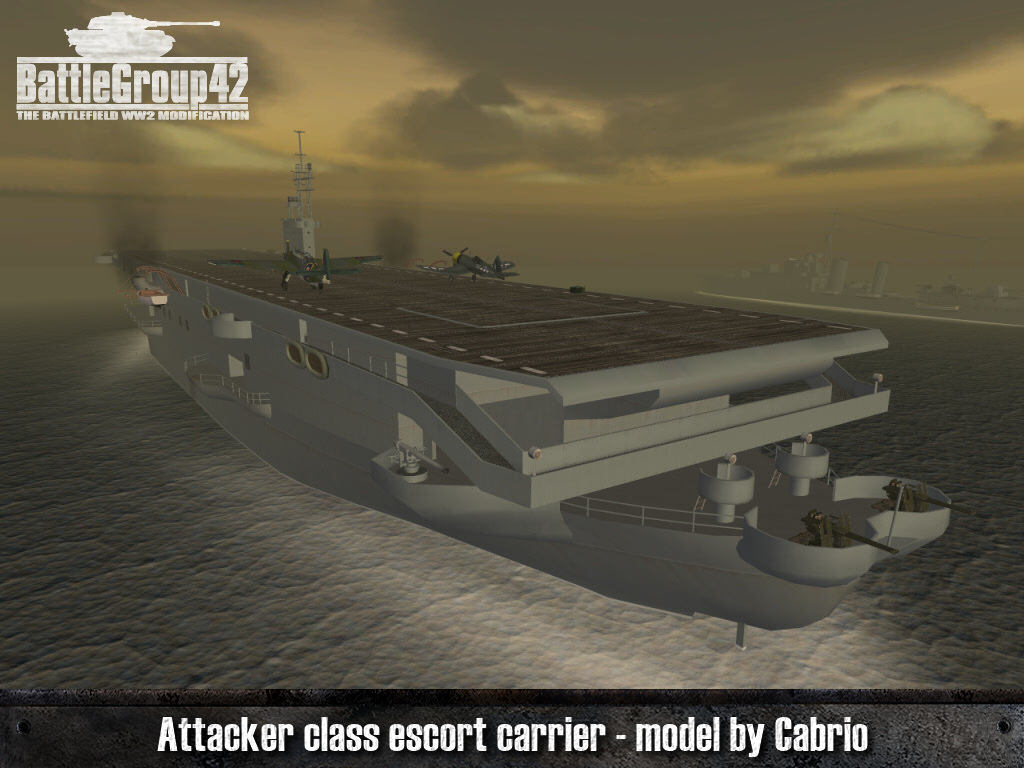 Closing this news there's also an update about "BG3", which is the working title of our BG42 conversion using the Unreal Development Kit. It is supposed to be a no-cost game, made by gamers for gamers, independent from the moods and profit interests of publishers. Since the development team is very small at the moment, work goes on only slowly. But nonetheless our project leader BG3Haribo was able to construct a framework, so that the basics for the game, though not in every detail, are set up. What we need now is content, most of all statics. Our current team is simply too small to create all the necessary buildings etc. within an acceptable time frame, so we're urgently looking for talented modellers who want to join the team or contribute content. We're also on the look-out for new developers working in all of the other departments like texturing, animations, sounds etc. So if you have UDK knowledge you want to contribute to the project, be it as team member or contributor, you're heartly welcome. Please contact BG3Haribo in our forum.