Originally started as a mapping project for Wolfenstein: Enemy Territory (W:ET), Battle of Wolken is set to become a mod in it's own right in the not too distant future. The mod will go further to explain what Wolken is and it's origins, all we know now is that it is a strange land discovered by the Germans during WWII in which vast islands floated in the clouds, hence they named it Wolken (German for clouds). Here they developed experimental technologies used against the Allies during the war, however their secret didn't remain hidden for long and the Allies went to seize control of the portal leading into Wolken but disaster struck and everyone on both sides were swept into Wolken with no means of getting back, the Battle of Wolken had begun.

So far I've made 6 maps for W:ET set in Wolken which can be viewed on the Homepage. These will not be included in the mod as the mod will most likely fully begin when the next chapter of Wolfenstein is released which may be some time away but will give me plenty of time to sort out the story I plan to tell and plan out all the missions for the Single Player portion and how they will tie in with Multiplayer maps and previous work I have done in W:ET. The W:ET maps have served as almost an experiment with the Wolken idea and from it developed certain 'rules' that will set the 'Wolken theme'. Also while I wait I hope to gain mod experience with Enemy Territory: Quake Wars and build up a list of contacts that I can call upon when I come to start work on the mod.

Currently I'm on the look out for concept artists to help build up a clear image of what I want the mod to become, I have managed to create a few pieces of concept art myself but could do with someone with real talent to help push things along, check out the help wanted section for more details.

Recently I uploaded a few pieces of concept art I had done a few weeks back for the project so I thought I would explain them more in depth than in the image descriptions given. 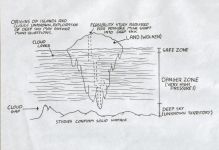 Ok this is a very basic picture of a typical island found in Wolken, it shows that the majority of the island is submerged within the clouds pretty much like an iceberg. The clouds themselves are shown to have 2 different areas, a safe zone and a dangerous zone. Entering the danger zone would lead to death due to high pressure, although I'm thinking of changing this to maybe severe electrical storms. Under this layer there is a gap between another land mass and the clouds, for the moment I've named this 'Deep Sky' although may change the naming due to similarities to the game Skies of Arcadia which has a similar area with the same name. Also hinted at is a shaft Axis forces want to build to explore 'Deep Sky' and unlock some of the mysteries of Wolken. The Tower of Wolken holds many of the secrets of Wolken, the purpose of the tower is unknown to all but will be revealed in the mod towards the end as things progress. At start of the story neither side know how to get into the tower or want to risk blowing open a way inside however an entrance is located at some point during the mod but don't want to give things away at the moment. 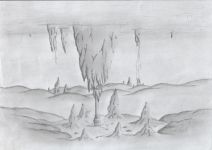 Here we have an Axis built shaft down into 'Deep Sky' as hinted in the first piece of work so it is safe to say that at some point in the story you will visit 'Deep Sky'. I wont reveal why as I will safe that for the mod. In the drawing we see a small portion of 'Deep Sky' which may look rather empty but that's due to my drawing limitations so expect the in game version to be more lively.

That's it for now, hope you found this information vaguely interesting.

Planning for Battle of Wolken

I thought I would explain the idea behind the mod and lay down what I have in store for Battle of Wolken and what direction I wish to take with the idea...