Bannerpage tries to add where Native MBW is thin and aims to significantly improve areas in which game hasn't aged well. It creates more immersive experience for hardcore players, returners but also new, younger players. At the same time mod religiously protects game's core values - single player campaign balance and maintains Vanilla's scent. Bannerpage is a full conversion from Native back to Native. Overhauled graphics, distinctive/immersive factions, new animations, new well balanced items, new music, new sounds, new scenes, improved AI, neat UI, new game mechanics in areas that don't affect balance but significantly improve player's experience and many, many more. Mod gives player multiple new options in almost every situation and thus adds a lot to the game's depth. I am dedicating Bannerpage to my two sons as monument of their father's love. Greatest thanks goes to my wife for her patience, love and support during many hours spent in making this mod. 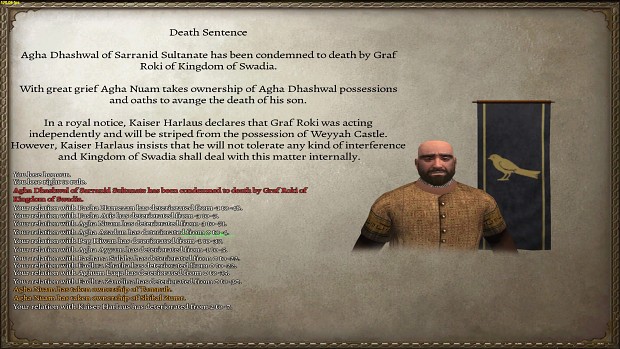 is version 2.0 gonna be released soon? It's because i downloaded the last version today xD should i wait a few days or..?

has a death sentence for players too? Permadeath?

This is quite the feature. Considering the titles, is this you executing a prisoner as a vassal?

For the sake of realism, if Harlaus must be a Kaiser then I suggest changing the faction name to "Empire of Swadia" or "Swadian Reich".

Although your suggestions resonate with some questionable implications and that is probably where you are coming from, this is actually a good idea, so from now on we will have:

Many have requested this feature. So here it comes.
Talk to your Castle/Town Noble prisoner. Trial them to Death / Set their Bail / Or Set them Free

Keep in mind that if you start killing Lords and Kings you will change Campaign balance.