We have stopped the development of Aurora.

It's the 21st November 2138: Despite many attempts, the political situation in the world did not really improve. Since 2050 again there is a Cold War between the NATO and the UAP (United Asia Pact), an alliance between Russia and China.
This led to a renewed rush into space. All over the world scientists were developing new engines and weapons. When the NATO sent out a space probe with a hyperspace drive 2078, the UAP had no chance to get ahead in space anymore. The NATO advanced furthermore by sending out more probes and spaceships. A highlight in this development was the discovery of ozone in the atmosphere of a planet in the alpha centauri system, which is about 4 and a half lightyears away.
Since Ozone is considered as assured sign for a breathable atmosphere, the NATO sent out a mission, to examine the suitability for settlement.
By now this colony is inhabited by about 2000 civilians and 500 soldiers. So far, it seemed that the planet was only inhabited by bacterias, fishes and early amphibians.
But the first impression wasn´t true. Today at 2´o´ clock middle european time a SOS arrived at the NATO headquarter. The entire colony was overrun and all resistance was destroyed.
A few survivors could send out a SOS, before they had to flee to the mountains.
The NATO administration didn't hesitate and sent out the Aurora, their most modern spaceship, to rescue the survivors.
Equipped with the most modern and powerful weapons, the cold war has created, the crew had to face a completely unkown threat.

Sorry, but we have to say that we freezed the MP version. We' ll first complete the Sp experience ;)

Here you can see the most features listed :

Please notice that some features may not be implemented in the final mod.

Today S4lz want to present you his latest model for the Aurora Mod: The main battle tank “Panther 4”

The Panther 4 is the most modern tank in the world. It's primary used by the NATO forces and the US Army. It is developed and produced in Germany.

Because of his 4 threads this tank is more flexible to the terrain witch makes it possible to use this tank on nearly every place on earth.

This weapon is an “energy only weapon” witch needs no additional Ammo, and must not be
reloaded, it just needs a small recharge time.

The MG is completely remote controlled and fires up to 3500 bullets per minute, with a
caliber of
.50 BMG

The Anti Air Battery can be used against air vehicles or even against light-middle armor
vehicles. It fires 20mm rounds with an speed of 1800 shots per minute. 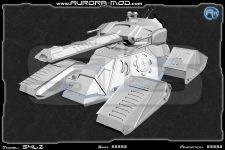 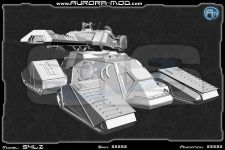 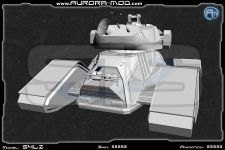 Welcome to our second dev diary of our series. Our level designer "xxnix" give you a short statement to our second level of the singeplayer campaign!

Today we want to present you a new model, the Communications (and Reconnaissance) Satellite HCS. Our Modeler S4lz created this decorative model.

Welcome to our anniversary-update, you won't believe it, but today it's still a year after the beginning of our project "Aurora - Maximum Space". And...

Greetings Community, This is the official Statement from the Aurora Mod of the Shock Illusion Studios. Today we want to release our first patch for the...

The first Aurora Multiplayer Beta. There are not all weapons and features included, yet. But a better Version will be released later.

Is this Mod Dead?

Yes this Mod is dead, but Sebi3110 wants to revive it later on.

"Sorry, but we have to say that we freezed the MP version. We' ll first complete the Sp experience ;)"

I cant find any servers for this mod :(

This is awsome! I'm looking forward to this mod... Hope it will be a great singleplayer campaign!!!

Thanks for the kind words, we appreciate them:)
Head on over our homepage, maybe you find some infos, when you can aspect some news from us :P