Atlas Mod is a Mod designed for Command and Conquer: Generals Zero Hour that allows the player to play as a newly created faction or general called Atlas General. The Atlas General makes use of advanced versions of the best units in the game and can be described as a buffed-up version of the Boss General. For new units and capabilities of the Atlas General, take a look in the Features section. The Mod, which is designed exclusively by HF-November took over a year to complete with over 3,000 edits of original units and factions and has been tested for more than 1,000 hours. Atlas Mod also allows the player to play as the old Boss General in Skirmish Mode which is originally unavailable in the game. However, none of the two new Generals have AI capability, which means they can only be played by a human.

The Atlas mod now has an installer which will help you install the mod by just selecting your C&C Generals Zero Hour directory. 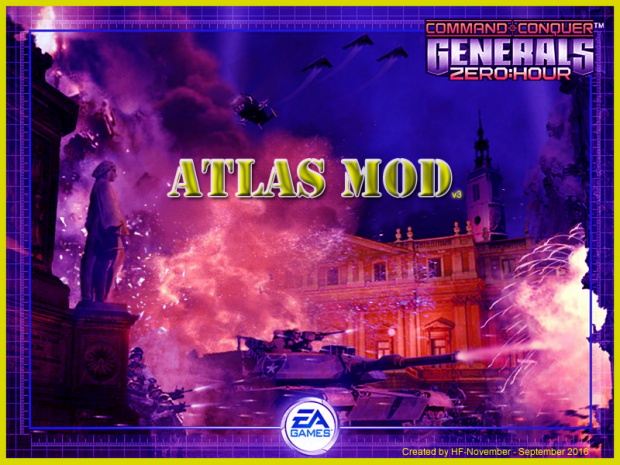 are you going to fix so you can play as leang or general ironsight? even though the anouncer says ironsight. but yeah it'd be really cool to play general leang going up against general ironsight in the challenge mode.

it's ironside not ironsight
and i think he won't fix it

It does not want to work for the Origin games?
Any advice?

I am using the Origin version. I copy all the files inside the zip file to the main directory of the Zero Hour. After that, I dubble click on the generals.exe. And then the game starts :). Good luck

Yes when you download it unzip into your documents folder then from there use the installer and it will install withing the Generals file in origin on the C drive , then after open Origin And play generals it should autoplay the MOD, but if it doesn't open Origin and minimize it then use the app to play and it will work.

how can I find the new units like apache in v3.1?

Whatever folder i choose it says "Not a valid folder". Any way to fix this?