Stargate: Challenged Empires (SG:CE) is a total conversion mod for ArmA. SG:CE will introduce players to a truly unique gaming experience, its multiplayer mode will place the player in the middle of a hugely interactive universe; giving them the ability to explore and colonize. Primary a FPS, the game will also allow the construction of off world bases, outposts and resource camps through a 'Command & Conquer' style interface but if grunt work isn't your thing then you can take to the stars; defending your planets or attacking your enemies with your naval might.

The Universe
One of the features making SG:CE so unique is dynamic rolling universe; unlike many Stargate mods in development SG:CE doesn't use maps/levels, there's no 'Same map, Different Server' issue. The SG:CE universe contains a number of worlds (40+ depending on server options), each dynamically generated at the beginning of a game; each world's geography is predetermined but its inhabitancies, wildlife, resources and technology will change.

Currently the playable races include the Tauri, Goul'd, Ori, Wraith; each race will have its strength/weakness and each with its own specials/abilities.


Multiplayer
The name of the game is domination, to completely crush the opposing sides main base and any secondary which pose a significant threat (there will be specific targets), how long this campaign takes is down to how each side plays the game which is why were integrating a 'join in progress' ability for longer battles; realistically a game could last any where from 5 hours to a few day with players leaving and joining as the game progresses.

The longer the game progresses the more powerful each race becomes, by integrating a degree of 4x game play were adding both researching abilities and a limited levelling for each players; the longer a game lasts then the greater the threat of an explosive finish, with varying super weapons becoming available to break those pesky stalemates.


Singleplayer
We plan to add a Single player mode with a small campaign for use in both offline play and as a training tool before entering the larger multiplayer universe.

For up to date news visit our forums at: Stargateassault.net

The Stargate Modification is a scripted add-on for Operation Flashpoint, ArmA and ArmA II,
it has been unofficially created as a way for fans to explore the Stargate as it is portrayed in the shows.
This add-on is completely unofficial and though we have gone through great lengths to mimic functions as shown in the shows
it is down to our own interpretation and may not be true to what SCI FI Channel or Metro-Goldwyn-Mayer Studios Inc intended.

All material on this website is for non-profit use and completely unofficial; please do not edit the contents of these files.

The following information are status updates and will change as time goes on. 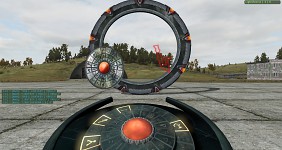 SVN Revision No: 35
SVN Revision Notes: Further cleaned up the existing code, removed unused functions.
SVN Area of interest: Have one more thing to fix in the DHD code, then I'm going to focus on the transport scripts.

The mod is now giving the public access to its SVN archive and with it the latest code and nightly builds.

The Mod is still in development, work is being focused towards ARMA II though we're still trying to keep it ARMA compatible; were currently in the process...

Its been a while since we released any news on the mod so i thought it about time to fill in a few gaps, firstly as you can see were no longer just focusing...

As the competition deadline draws near we sweeten the deal.

Mdesti released part of this dead mod. Shame it wasn't the full version, though. At least it's something.

Mdesti is bringing back MOD EVERYBODY GET READY! MAY 16TH HIS POST WILL BE OUT SOON

whats wrong with the website whenever i try to go on it i get this message"Table './sg_forum/smf_sessions' is marked as crashed and last (automatic?) repair failed" is there a wey to fix this

will it work with arma 2 free

Is this MOD still available?

Hi all,
Progress has been non-existent for the last 6 months due to RL issues and complications in the coding department, however there a silver lining and I'll be picking this up again.

Hope we get more epic work!

I hope you really do pick this back up!

Good luck and if you need a tester, PM me.