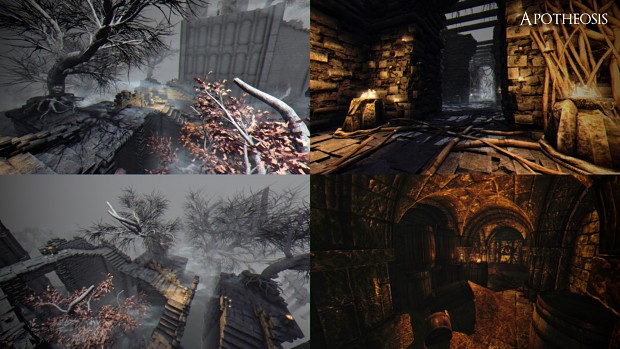 Just what nightmare should we expect inside, I wonder? :)

I love the atmosphere on this Oblivion realm

Somehow I get strong Quake 1/Painkiller vibes from the outside pics :D

I wish I knew how to make mods as good as this one. This is absolutely mind-blowing!

Not the Quagmire i expected.

"He was not in the Deadlands, but Quagmire, the nightmare realm of Vaernima. Every few minutes, there was a flash of lightning and reality shifted, always to something more horrible and horrifying. A dark castle one moment, a den of ravening beasts the next, a moonlit swamp, a coffin where he was buried alive. Fear got the better of my master, and he quickly passed to the next realm.
I heard him laugh,

"Quagmire, or the Dreamstride, is a realm of Oblivion, created and ruled over by the Daedric Prince of Nightmare, Vaermina. It is a realm of horrors, where reality shifts upon itself in seemingly impossible ways. Every few minutes, lightning flashes and the realm morphs into a terrifying scene, each one more frightening than the last.

It is the realm most often visited by mortals. From her citadel in the center of the realm, Vaermina reaches out into Mundus and collects the memories of sleeping mortals, leaving nothing but visions of horror and despair. These experiences, known as nightmares, involve the mind of a mortal traveling to Quagmire. Through magical teleportation, it is possible for a mortal to enter Quagmire while awake, as was done by the mage Morian Zenas."
En.uesp.net