Evil Infects is a project I am currently working on for Amnesia: The Dark Descent. What I am trying to accomplish is to create the longest custom story possible without the loss of quality scares, atmosphere, story, and, of course, puzzles. This custom story is also going to be a full conversion mod, so a flashy menu screen is one thing to look forward to. :P This is currently a work in progress, and I am only partially done with it, so it may be a while before it is finished. Before then, I'll be sure to keep those of you who are interested in it updated on the project.

Sorry I haven't updated for a very long time. I've been pretty preoccupied for the past few weeks and I found myself revising what I had so far a lot more than what I was expecting. But fortunately, this project is not dead and I am still working hard on it. :)

I've been revising the Eastern Castle quite a bit for the past few weeks. After watching a few people's LP's of the demo, I was able to pick out a lot of problems based on their experiences with it. After seeing these LP's, I've become very dissatisfied with the first part of this custom story, so I decided to put it under heavy revision. Right now, i'm pretty much done with revising the eastern castle, and it has changed enough to where it is considerably different from what it was in the demo, so expect to be caught off guard a few times when you play the finished version. :P

One of the biggest problems with the Eastern Castle to me was the lighting. I started this custom story the second I got my hands on the level editor, so I was pretty inexperienced and didn't know how to use point lights. When I thought that I was finished with the Eastern Castle, I soon learned that there was a way to attach lamps to point lights, and, well... you can imagine how disappointed I felt. I would now have to revisit all of the areas that i've already done and implement point lights, and I knew that was going to be a very long and repetitive process. I could have left it the way it was, but I knew it's never good to leave behind sloppy work, so I went ahead and started putting in better lighting.

I was planning on only doing lighting, but as I went along, I started noticing other things that I cringed at, such as bare areas, clipping problems, ect, so I soon found myself doing other things besides lighting. The LP's that were done on the demo have also caused me to consider changing a few of the scares and the design of the levels, so I was now doing full revision of the Eastern Castle.

It took a long time, but overall, I can say that i'm glad that went though the effort. 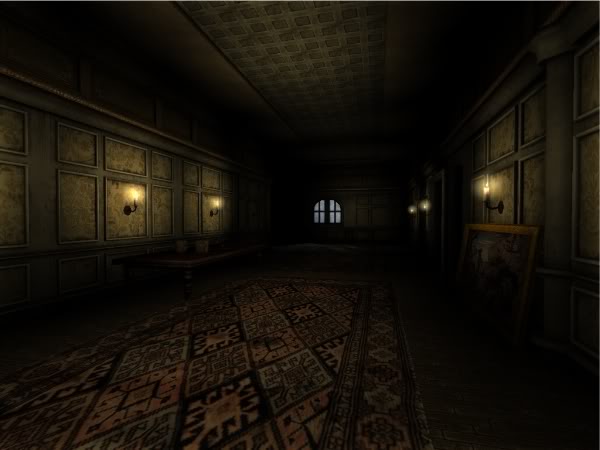 I'm also trying to think of a good story line for this custom story. I went in making this without even the thought of developing some sort of plot, and towards some point in development, I quickly threw something together once realizing that it wouldn't be a good thing if there was no purpose in wandering a castle infested with an unspeakable evil. Yes, very big mistake on my part.

Hopefully, when i'm done with this, it will be worth playing. A great thank you for those who are interested in this custom story. :)

Very lengthy demo of Evil Infects. I predict it will probably take at least an hour to finish, so have fun with it.

7/10 Really good so far. I have a few suggestions. Get rid of all the pointless rooms, they're a complete waste of the players time. Maybe shorten it a bit? It drags on for very long going back and forth, I'd recommend redesigning quite a bit to make it feel like much less of a drag, this literally is a walking simulator, haha. Other than that, it was great, the events were panned out perfectly, the lore is interesting, and the map design was pretty good, although as I said, get rid of the pointless areas completely, and it'll be even better.

Are you still working on this custom story?

If the demo is this huge and excellent, I wonder what the full version is going to be like...

I have to say, I'm pretty impressed by this mod. Rating 10/10 it's one of the ******* scariest mods I ever played. I made a Let's Play of the Demo, but It's in german (that also does explain my bad english^^).
Feedback: I really liked the environment, the big rooms and the spooky lightning. I did pay attention to the story and i do like it, I think I might havent got all of it, but the things I understood weren't bad. Atthe start the story hadn't that much scares,but I was Impressed by the Atmosphere. But after first time Storage-Room it got ******* epic and scary. Iteven made me quit the story, because I needed a break. I played many Mods for Amnesia including House of Creep 1-3, Abduction, La Caza and many more, and this mod was really the best I've ever played, nd this is just the Demo! please keep going, I wan't to play the full Mod!! :)

Here's a link to my Playtrough with commentary. As I said it's german so if you are from Germany give it a try. Youtube.com

I'm enjoying your LP! Thanks for uploading. :)

That's not demo but chapter 1! Keep a good work, dude. I like it!