This mod is an alt-history addon to HPM mod attempting to turn Alaska and the north pacific region into a more signifficant and economically vital area. What if the natural resource wealth of Alaska could be exploited a century earler?

You can play as any of the concerned powers - Russia, US, UK/Canada or Japan, or Alaska itself, align yourself with one or the other and try to become a great power.

If you're playing Alaska the first 30 years or so you wont have much to except grow your population. An important system in them mod is developing the land through decisions, which reqires a lot of money. You will not be able to get the whole sum yourself, and will therefore have to ask for investment from great powers. 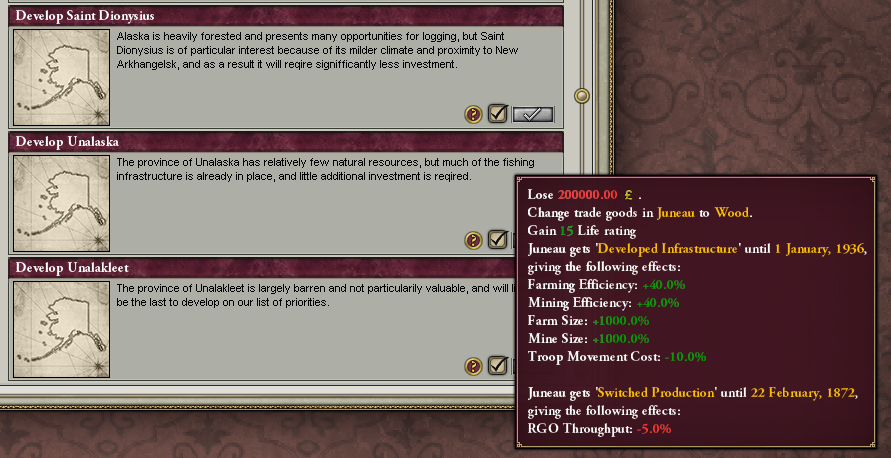 Certain provinces can get important goods in time, which will be highlighted in the decision.

Currently AI Alaska should prioritize allying the player first, and it should ally the UK if you are playing Canada. There is also a decision for the UK to ease switching to Canada.

If Alaska is AI, it can be annexed by whoever is its overlord in the mid 1900s.

To avoid messing with the history files, building ports and railroads is also done though decisions.

Certain files had to be overwritten, so if you want to use this mod with other minimods, check if they share any overwrites (last 3 files in the image)

If they do, past the contents of the first 3 files marked with !! into the corresponding file in the minimod. I also recommend you do this if you're using this mod with a version of HPM different from the one this mod was made for, as new countries or cultures might have been added.

To promote Alt-history Alaska minimod for HPM and grow its popularity (top mods), use the embed code provided on your homepage, blog, forums and elsewhere you desire. Or try our widget.

Hopefully most bugs fixed, whoopsies. I need to fill extra space so aaaaaaaaaa

Initial release of Alaska minimod, made for HPM 0.4.6.3

Ok it seems I screwed up the release version, if you tag to RUS and release Alaska with a decision it should work as intended. Sorry bout that.

This submod was made to balance the military part of the game, which in large proportion is broken. So at the end of the game it will still be possible...

A submod for Victoria 2's a Pop of Darkness Mod that adds the ability to retake the lost provinces of New France. Reclaim and rename Canada, undo the...

This is the exact HFM mod, but with some new decisions and events for Mexico, allowing you to make Mexico actually potential for reaching 1st rating on...

A mod for Victoria II with Heart of Darkness Expansion that continues the legacy of Divergences : An Alter Vicky mod created by Kinniken. HPM version...

Currently, only Japan, Italy, & The United States Campaigns are completed! Germania and Iberia are also formable! Victoria II: The Supernations Mod is...