Aug 3rd 2016. I've been testing multiplayer via Hamachi in my home network, and it works smoothly. By solving the problems I've been experiencing with multiplayer maps, I can now announce the mod (V4C) is 100% multiplayer-capable and thoroughly tested. I even tested it with a high lag emulator.

However, when playing with some other remote machines, multiplayer games sometimes suffered from desync problems, which eventually led to crashes. The reason behind this has not been identified. Could be settings, could be wrong Wargus version, could be network connection problems.

Yet, even though I still do not know the cause of these problems, I know for sure the game and the mod are 100% stable in multiplayer when certain conditions are observed. Here's a video with a failed test:

Ponies in a classical strategy game... What a joke! And that's how it all started - ponies burning your villages and enslaving your kids, ponies rushing at your cannon towers. But MLP is a comedy show on it's own, so the first version of this mod was especially fun for those familiar with the show. Rarity being a peasant for the "evil side", forced to mine gold - I like that! This version of the mod is called V3, with V3A being multiplayer-capable. In V3, almost no aspect of the original game has been altered - every restriction has been observed, so the mod allowed to play anything Warcraft 2.

But since MLP is not only about comedy and drugs, there've been folks who insisted a fantasy-themed MLP mod would be a better option, so I made the second version of this mod called Nightmoon, which is the secret kingdom of princess Luna that stood up against Canterlot. In this new version of the mod I used more opportunities offered by Wargus and Stratagus, and went a little beyond the limits of Warcraft 2, however trying to keep compatibility as much as possible. Nightmoon has several successful game modifications, which include:

However, you can only use the new mod on maps that have old trees replaced.

V4 Nightmoon lacks the fun of V3, but has obtained a certain style and a fantasy feel. I like both versions.

Stratagus is a game engine that runs as a background process.

Wargus is Warcraft 2 that installs using a Warcraft 2 CD or image, and relies on Stratagus to work. So technically, All-team Organizer is not a Warcraft 2 mod, but a Wargus mod.

Wargus used to have critical errors that prevented Multiplayer from working, but thanks to the good people, the fixed version of Wargus 2.4 had been released. Since it's easy to confuse with the standard 2.4, the right installer has been included in versions V3A and V4. These two use Stratagus 2.4 and Wargus 2.4. The older V3 uses Wargus 2.3 and Stratagus 2.3.

Balance changes to beware in V4:

Ok, this part is oldschool and can sometimes get problematic.

1. Get a Warcraft 2 CD or its Image
2. Install Stratagus
3. Install Wargus using the CD, skip all errors

4. For V3A: copy contents of the archive over the Wargus game dir.

4. For V4: extract the archive somewhere, copy wargus.exe to the game dir.
5. Run wargus.exe "as Administrator"

Multiplayer note: use VPN software like hamachi, enter IPs manually. Brace yourself - anything may be coming.

May 12th. The forum has been launched for lengthy discussions. Article added on converting old maps to the V4.

May 3rd. Released All-Team Organizer V4A, which is: an alpha, a completely reworked version, pretty exciting to play. You can play Tides of Darkness for Luna or Celestia, up to campaign levels 11 - 12. Nothing else happened - no Apocalypse. 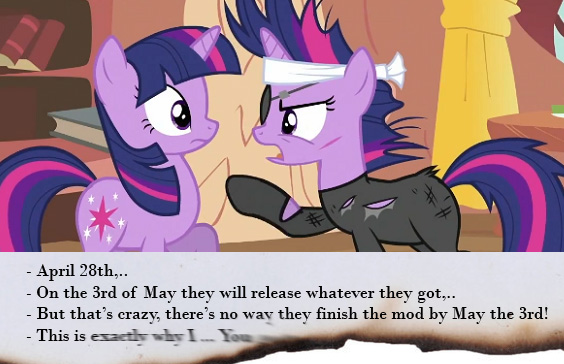 April 22nd. Map 5 technology tested. Video uploaded. Everything else is basically tuning - the road is open to releasing the alpha.

April 18th. Map 4 technology fully tested. Habitable towers, units firing from transports - map4 technology tested! Tower upgrades will be disabled. UPD: no they won't. Only firing towers will be ponyable, only Watch Towers will have detectors.

April 17th. Hey guys! Check out the gameplay video. Almost all goes well up to map 3. Note: I'm using lots of art and music - every piece will be referred to ingame in credits.

April 7th. The hard part is officially over. Not only is the problem of ships solved, but hey guys! I got individual trees! Old wood will no longer be harvestable, so it has to be replaced with individual trees. It was a hard decision, but there's just no way to make 32x32 tiles look like solid trees. Now, every map has to be changed in order to provide this vital resource. I guess the alpha will be out soon enough.

Most of them go to Urimas and the Gameloft guys who develop their MLP farm game. Most credits are listed ingame.

The hard part is to obtain the original game CD. This mod is not even really a Warcraft 2 mod - it's a Wargus mod. Wargus is the improved version of WC2 made by enthusiasts. To ensure Blizzard is not going to send assassins to hunt them down, the creators of Wargus made their game require the Warcraft 2 CD or image to install. Since your first step is to install Wargus, you'll need a CD or image file of the CD of either Warcraft 2 Tides of Darkness, or Warcraft 2: Battle.net Edition. I only had experience using the latter.

So, how do you get the "Warcraft 2: Battle.Net Edition" image? I hope not via torrents, which is easy, but illegal. Take the legal path instead - respect Blizzard's property rights for this 1995 game.

If you have the image*, which is possibly an .iso file, you need to mount it For that I use DAEMON Tools Lite. Once you have both the image and the program installed, you'll be able to mount the .iso file, by either clicking or right-clicking on it (you'll need to choose a proper option from the menu).

You're now supposed to have the CD mounted. In my case - to drive K:\

* obtained by backing up your original game CD, not via torrents

First time you're asked, enter the path of the mounted image. Like "K:\". The second time you're asked, just leave the field blank. You're now supposed to have Wargus installed to somewhere, like C:\Wargus. Go there and grab wargus.exe

Unpack the "Wargus + Nightmoon V4c" folder anywhere. Put wargus.exe inside, run it. If something, right-click and "run as Administrator". That's all there is.

The relevant patch currently is V4C3. It contains the "scripts" folder, so you need to replace the original "scripts" folder from where you installed the game with this one.

To install maps, put the individual files strictly to the maps\ folder.

Network out of Sync - Have a Nice Day! (Notes on Multiplayer)

Playing this in multiplayer mode may be tricky. In this article I'm going to gather the most relevant info on the subject.

All-Team Organizer: How to add custom units based on existing ones. The guide does not cover the whole process, but elaborates several critical moments...

This guide helps you add new trees to Wargus Campaign maps, but can also be useful for those interested in opening various existing maps and troubleshoot...

Install V3A just like V4D: 1. Install wargus provided using a WarCraft2 CD 2. Take the wargus.exe from there 3. Extract the mod to a separate location...

Most importantly, added new sounds. Added 2 background ponies for each side. Included all map packs. So currently, this version is supposed to be the...

Applies to: V4C1 Installation: replace contents of the "scripts" folder in your wargus dir with this one. Changes race names and action descriptions...

Applies to: V4C1 Installation: replace contents of the "scripts" folder in your wargus dir with this one. Now, that it's obvious, that Multiplayer problems...

I'll use this version for multiplayer tests. It depends on the latest builds of Wargus and Stratagus, has garrisoning towers and firing from within other...

Several issue with the changed battleship mechanics in water map campaigns
1. The game AI with starting battleship have no range units load or don't load any range , also having no default attack option they sit useless on the water
2. Range units load in battleships are easy distracted by trying to target enemy units instead of building like the towers.
3.Cannons tower (now shoot fireballs) I feel does too much damage to Battleship due additional splash damage the fireball does on top of the ship's large hit box.
4.Battleship are too expensive to build
battleship 1000gold500wood1000oil + loaded ballista 900gold500wood or other range units.

4VD is the last version or V4C3?
Pd:Nice work,in a future i upload videos of this,will you leave me with your permission?

Yep, V4D is like final, but V3a is totally different (older, more about fun, no changes to the game itself)
Of course you have my permission!

Hello I come to tell you something that is happening to me in the mod campaign, the last canterlot mission, the army AI that is on the island where I have to do the base, comes and expands to the gold mine that I later have what to use, when he sees me or attacked the expansion, he comes with all his army with all the Upgrates and defeats me.
I wanted to know if something I can or can do about this, as I remember in the original Warcraft 2, only the dragons attack

So nice you noticed!
I'll fix this.

Another little thing, do you think also put the expansion campaign of Warcraft 2 Beyond the dark portal for the mod?
By the way, if I encourage myself, I will translate it into my language, Spanish, if it does not bother me!

I've uploaded the fix to the files section. The map is now supposed to be passable) Beyond the Dark Portal is a good idea, of course. But for now I'm unable to do that - too much work. I hoped some people would make their own stuff since I've left some instructions...
I was actually trying to make another version of this mod, but encountered too many bugs in the game engine. So now I've put everything on hold.