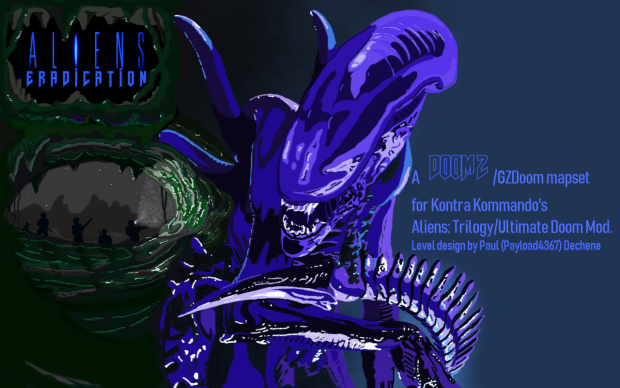 WHAT IS NEW IN DEMO 2:
- Hud scaling is fixed for all resolutions.
- Hatched eggs no longer count towards the total monster count.
- Flares no longer pass through unbroken vents and no longer break windows.
- Aliens behaviour is slightly more aggressive.
- Smart gun locked behaviour improved.
- The COLONIST has access to the colony's electrical and fuel systems creating opportunities to set fire and electrocution traps.
- The MERCENARY must fight colonist, conducting a raid to steal valuable research and material related to the xenomorphs (who have gotten out, of course).
- The YUTANI OPERATIVE must fight mercenaries, colonist, and xenos in a sweeping "Kill Them All, Leave No Witnesses" mission.
- The COMBAT SYNTHETIC must find repair/replacement stations located through out the colony to heal and cannot use the standard (human) health kits.
- Also has a data base of schematics for the colony compound, providing it with the full automap on start up.

THE STORY:
AN UNLIKELY ALLIANCE ON LV426. THE COLONISTS; STRUGGLING WITH THE CONSEQUENCES OF A CONTAINMENT BREACH. THE MERCENARIES; CHOOSING THE ABSOLUTE WORST TIME TO RAID THE NEW COLONY IN AN ATTEMPT TO CAPITALIZE ON THE RESEARCH BEING DONE THERE.
XENO GENETICS IS BIG BUSINESS THOUGH, AND WEYLAND/YUTANI WILL NOT LET THEIR INVESTMENTS BE STOLEN OR DESTROYED. A RESPONSE TEAM IS ON ROUTE TO LV426 WITH INSTRUCTIONS TO ELIMINATE ANY WITNESSES AT THE SITE AND SECURE ANY SYNTHETIC COMBAT UNITS ENCOUNTERED FOR THEIR CAM FOOTAGE AND DATA RECORDERS. THE COLONY IS IN A STATE OF CHAOS AND COMBAT. HOPEFULLY THE SYNTHETICS WILL CLEAR MOST ALIENS BEFORE THE TEAM ARRIVES.

HOW TO PLAY:
- Unzip the folder and run both files (pk3 and wad) with the pk3 first and the wad second.
- THE PK3 FILE ACTS AS A TOTAL CONVERSION FOR OTHER DOOM WADS.
- The ERADICATION wad must be played with the included pk3 file.

HOW IS THIS DIFFERENT FROM OTHER ALIENS THEMED DOOM PROJECTS?
- No random enemy spawners. Enemies are placed in a setpiece fashion allowing the player to develop better strategies over time.
- Play as 4 different classes, each with it's own story, starting inventory, gameplay, item/monster placement and more! (press F1 in-game for more info)

MANY WAYS TO PLAY:
All difficulty settings are implemented as well as each class presenting it's own unique difficulty.
The easiest setting ("A FEW ALIENS") is more about tension, atmosphere and one on one encounters. The hardest ("HORDES OF ALIENS")
puts you in a near impossible setting. "GAME OVER, MAN" is the Nightmare setting (not recommended:).

TESTING:
This is still a work in progress so any and all participation/feedback is welcomed (find me on Doomworld Forums: payload4367).
I recommend playing on the "LOTS OF ALIENS" difficulty setting until you are familiar with the monster/weapon mechanics.

Great to see this getting updated throughout development, I played the demo only a week ago and it was really good. I'm Looking forward to the future development of this project.

Thanks for checking it out. Working hard to get it finished.

Is it possible to spawn friendly npc? If not then that should be definitely implemented for story wise and fun. (like how most doom mods have friendly Marines)

I encountered some friendlies when I was playing as a Colonist, I accidentally blasted them and then I 😢. Perhaps you could call help in or release them from being locked down.

The npcs part of the gameplay will be fleshed out more in subsequent maps. The marine class, in map2, will be given the choice to join forces with the colonists against the aliens or continue to fight them. However, none of this will be necessary to complete the maps/game. I'm focusing mostly on a solitary experience but I do plan on putting in co-op later. Thanks for playing and commenting.

It would be really awesome to fight alongside civilians or colonists. Not enough that they become op but just enough to know the colony isn't an empty playground.

Try a playthrough as the Colonist class. The demo has two groups of other colonists you'll meet who follow you around and provide some extra firepower. You'll hear them yell "don't shoot!" when you near them.

I love what you guys are doing here. Kontra does great Aliens and Payload does great map design; a win-win combo for the players.

The NPC chatter of the Combat Synthetics was especially annoying in the previous release. Is there a way to make them emote less often or not over each other?

Thanks for listening to feedback and fixing the HUD.

Hi Kills!
I will be adding a lot of new enemy sounds through out dev. I got some good ideas to address your above comment (about blasting the friendlies, lol), so thanks for the heads up.

Right on Payload, I've got one more video to upload then I've demonstrated all the different classes, hopefully my footage is helpful. If you have any new maps to test I'm interested.

Yes! Your videos are very helpful and much appreciated. I'll get something to you in a week or so. Map02 is just about wrapped up and Map03 isn't far behind.

I've got two ideas for future mods that IMO would be pretty popular. One builds on these assets, its essentially AvPvT with T being the Terminator.

So you play as humans trying to escape the eventual Terracide of Earth. Just as Judgment Day is happening the Predator's attack Earth by delivering ships full of Aliens to most major cities.

Essentially the crew of protagonists are just trying to escape Earth as they know its lost, thus they are not really heroes, just a group of hardcore survivors.

My second idea is less safe, but overall I think it could be amazing and very unique. You play as Michael Jackson, yes MJ.

Each level or episode is based around his popular videos: Thriller, Moonwalker, and Captain EO. This would give an episode about horror, one about whatever the heck was happening in Moonwalker, and one about sci-fi/space.

Dancing could be one of his weapons, not to mention a pistol (seen in Moonwalker). MJ could shape-shift depending on some requirement such as setting or time of day perhaps?

MJ can shape-shift into a werewolf, a zombie, a car, a ride, a spaceship, you name it.

The enemies are very typical bad guys wearing bike helmets, 1930's style gangsters, newer 90's style gangsters and the kingpin is a drug dealer (playing on the whole drugs are the devil angle) with an army of spiders, ranging from normal spiders to massive spiders the size of rhinos, to robotic spiders.

Can you add some friendly npc?

If you play as the colonist class, you will encounter 2 groups of other colonist npcs in the first map. You can't issue them orders but they will follow you around and provide some extra fire power. They die easily and are not needed to finish the map. When I work on the co-op for this, I will try to add bot npcs also, but that will be after the single player release. Have a great day!

Is Aliens: Colonial Marines abandoned from the project or it is included ?

That is a separate project entirely. I know it is still available here on Moddb and the author is still working on it.
That's all I know.

Do I need all the demo files or can I delete the older ones?
Please someone tell me...

Also this mod is bloody amazing

You don't need the older files. Each update will stand on its own.

Great mod.
So far, I completed the colonist campaign, and it was awesome!