Akimbo 2 (aka The specialists RIP)

A mod for doom which contains most weaponry from half-Life's mod: The Specialists (2.1 and 3.0), as well as the hud. Compatible with Vainilla maps.

Thanks for voting and helping Akimbo 2 (aka The specialists RIP) on it's quest to become the 2021 Mod of the Year. You are now in with a chance to score some free games from our #modlove collection. Help this mod secure more votes by embedding the widget (or link) we have included below on your favorite sites.

This is kinda unexpected, but I'm pleased to Announce Akimbo 2 is about to get a major update sometime in 2020.

As you may know, we're all under quarantine. And i've been offline since february, so, i've decided to make good use of the quarantine time I had and work on some old mod's of mine.

So, without further ado, let's talk about some of the changes the mod will have:

* Weapons sprites are now tweaked for 16:9 compatibility. You will no longer be forceed to play at 4:3 aspect ratio.
* Heavily improved scripts. Redone several scripts with the knowledge i've got over the past 8 years.
* New playable character: The oldschooler. Pickups weapons and ammo like if it were the 90's.
* Tweaked decorate for most weapons.
* Added an alternate version of the katana for Styler and oldschooler character.
* Bob is now allowed on all weapons.

I know, the mod has been abandoned for several years, but this was something I wanted to do for quite a while. Forced quarantine and no internet was a good combo to finally sit down and make this update a reality. 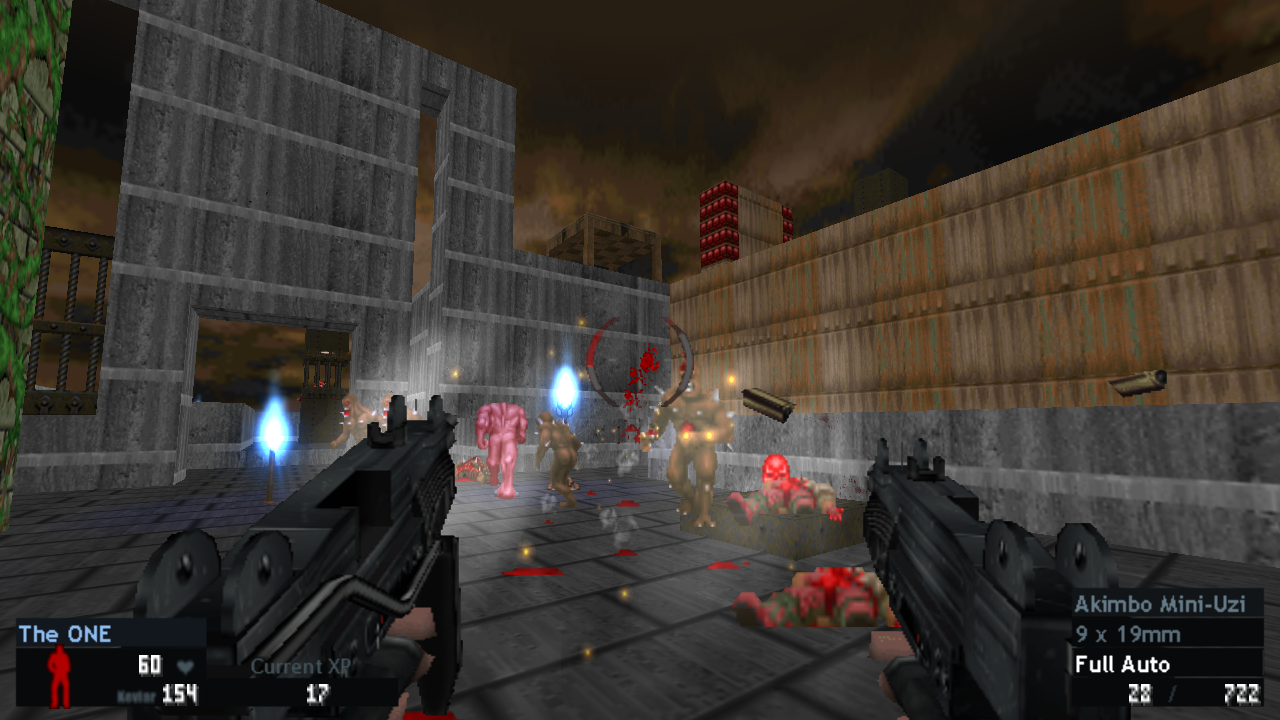 Update should come anytime in 2020. I don't have an estimated date though as I'm still offline.

The final version of this mod. Includes up to 36 weapons, 4 campaigns made with Oblige level maker and tons of fun ;) Note: the included levels uses Doom.wad...

Note: You require at least 1gb ram to run it properly. Long story made short, this patch doubles the sprites resolution thanks to Hirestex implementation...

The mod stopped being updated years ago and I didn't had a record of the previous changes done through each update, so this changelog will only mention the things that were changed within the last 4 months.

Further improvements to block mechanic:
Now it no longer breaks the invulnerability powerup and only blocks attacks from the front side.
Now it has some cooldown if used too much.
Block state can interrupt fire states and viceversa on Seal knife, kung fu, combat knife and katana.
Rewrote the stock/block button mechanics, now it's triggered via wrf_allowzoom on weaponready states instead of jumpifinventory, which improves overall responsiveness.

Never played this til now. Love the Specialists

Hype for an update!

Yeah, the specialists is my favourite hl mod.
And after newblood released maximum action,which has similar vibes to that mod, it kinda got the mood to do something for this old mod. Quarantine helped me to improve even further the mod.

I planned the update to be done in may. Imagine what 5 extra months can do for improvements.

Going to download and try this out tomorrow morning.

I recently got back into The Specialists; been playing offline with bots for now. Servers are still kicking around.

Thanks for your time and working on this mod.

Yooo I adored playing Akimbo 1.0 back in high school, I'm super excited to hear there's gonna be an update!

The update is out now =P

awesome, thanks for letting me know. Can't wait to try this!

Aaaawwwwweeesome ..an update ..thanks a lot

Single Player
Tags
Embed Buttons
Link to Akimbo 2 (aka The specialists RIP) by selecting a button and using the embed code provided more...