This is a preview about the first African Civilization in The King's Return Mod (you can check in this article or in the official website Oyo Kingdom Preview.The Oyo Kingdom was an African Empire located in Yorubaland, West Africa (today's Nigeria & Benin).

This is a preview about the first African Civilization in The King's Return Mod (you can check in this article or in the official website Oyo Kingdom Preview.The Oyo Kingdom was an African Empire located in Yorubaland, West Africa (today's Nigeria & Benin). It was one of the most powerful kingdoms in the region. Due to the fact that the northern savannah was partially free of tsetse fly, the Oyo could raise & import horses and form a standing army of cavalry (tsetse fly hinders horse raising as it transmits deadly diseases). Oyo was one of the very few African kingdom that relied heavily on cavalry to expand its borders. Although the Oyo kingdom raised horse locally to a certain degree, it had to rely on large number of imported horses.

The playing strategy for the Oyo Civilization will be very unique. Since they are technologically much more inferior than European civilizations, the Oyo player will have to rely on the skillful warriors & warchiesf to stand-up against western civilizations war machine. In general, the Oyo units are powerful with high attack but they are dependent on each other to keep their health (see below).

Oyo kingdom developed a highly sophisticated political structure to govern its territorial domains. In the game, there will be 3 groups that will represent the government of the kingdom : 1) The King (called Alaafin) ; 2) The Ogboni Priesthood ; 3) The Oyo Mesi Warchiefs. Each group will be dependent on the other to maintain its health (historically each group formed a layer of check & balance against the other to prevent absolute tyranny power). The following picture summarize the Oyo play mechanism. 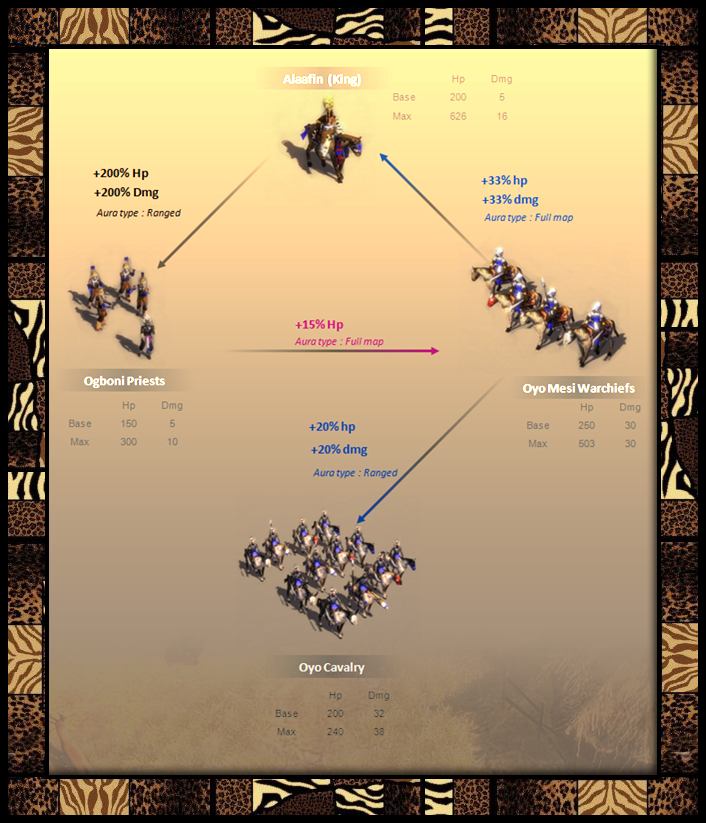 Alaafin is the head of the empire and supreme overlord of the people. Basically, he is weaker than other heroes having only 50% hp & attack when compared to European explorer. However, each "Oyo Mesi Warchief" will increase Alaafin hp & damage by 33% (see Oyo Mesi below). The Alaadin himself will increase Oyo Priests' (Ogboni) hp & damage by 200%.
The Alaafin has a very unique ability called the "Royal Slave". You can turn any unit of your villagers or infantry units into a "Royal Slave". A royal slave is a villager-type unit (blessed by the king) with 15% higher gather rate. But bear in mind that once you turn a unit into "Royal Slave" they will be subject to slavery by enemy i.e. they can be auto converted by enemy much like herds (historically the royal slaves were called ilari whom they worked as high officials in the government thus enjoying a very high status & prestige). 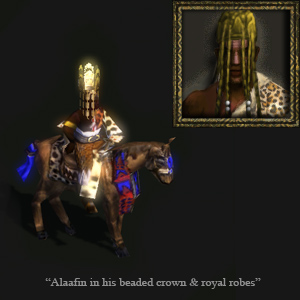 The Leaders of the hand cavalry army. Warchief is a powerful unit with high attack & medium hp that can be further enhanced by Ogboni priests (each priest will increase warchief hp by 15%). There are 4 Warchiefs each one corresponding to the hand-cavalry sub army mentioned above. Each warchief will enhance his army hitpoints & damage by 20%. Additionally, each wacrhief will enhance the King (Alaafin) attack & damage by 33%. 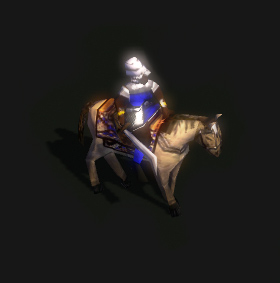 The basic healer & religious authority of the Oyo Civilization. Oyo priest are only limited to 4 units. The Oyo Priest has only 50% hitpoints compared to other civilizations priests. However, the king unit (Alaafin) will enhance their hp & damage by 200%. Additionally, a further shipment can be researched so that the Alaafin will enhance priests' hp & damage by 300%.
The Ogboni Priests themselves will enhance hitpoints of the Oyo Mesi Warchiefs by 15%. All priests can gather unique resources called faith from the temple.

The Oyo High Priest
The highest religious authority in the kingdom. He is an enhanced version of the Oyo Priest with limit of 1 only. He possesses a special ability called "Parrot's Egg". At anytime time you can force your Alaafin to commit a "Royal Suicide" by offering him a parrot's egg in order to remove him. This ability will temporary sacrifice 50% of your villagers' gather rate but will also enhance hp & damage of all land military by 25%. Additionally, the kill bounty of +100 will be granted to you instead of your enemy. Once the king commits the suicide, a couple of parrots will be released in the sky to celebrate the event!.

•Buildings will cost 15% less wood but will also have 10% less hitpoints (except for walls & towers which will cost the same & retain full hp).
• Town Center cost 10% less wood but retain full hitpoints.
• Oyo Barracks is called War Hut:Oyo Player can train minor natives from the the Oyo War Hut as it will act as a hybrid between regular barracks & natives embassy.
• Royal Slaves (ilari): unique villagers with 15% higher gather rate. This is a non-trainable unit & can only be obtained by the king's special ability. Additionally, this unit is subject to slavery as they can be auto converted by enemy unit like herds.
• The King (Alaafin) can convert any villager or infantry unit into Royal Slave.
• Unique Resources : Faith & Slavery Exports.
• Trade Center: A new Unique building that will replace the consulate for the Oyo Kingdom.

For full information about Oyo units you can find on the official website : Aoe3kr.wyteravens.com

I really like how their units are speaking Yorumba in the video, it adds more quality and variety to the game!

A few questions: 1)will they get stolen European artillery, or will they resort to rams and mantlets? 2)what will they have in common with the kongo faction?
3)as I see you added the yorumba as a faction, will you possibly add Dahomey or the Songhai as minor natives?

1. Oyo won't get rams nor mantlets. I have not decided on artillery yet for Oyo Kingdom.

2. Africans will share the same visual buildings. Additionally, both Oyo & Kongo will share basic infantry units, namely : poisoned arrow bowman & assegai spearman. Otherwise the kongo will have their on set of unique units.

3. Dahomey will be there as minor native. They will have Dahomey Amazons: fearsome deadly women warriors! the only female warriors in the game!

hopefully y'all expanded to South East Asia Civilization, and creating United States/Australia/Canada Civilization. with more Civilization behind on it