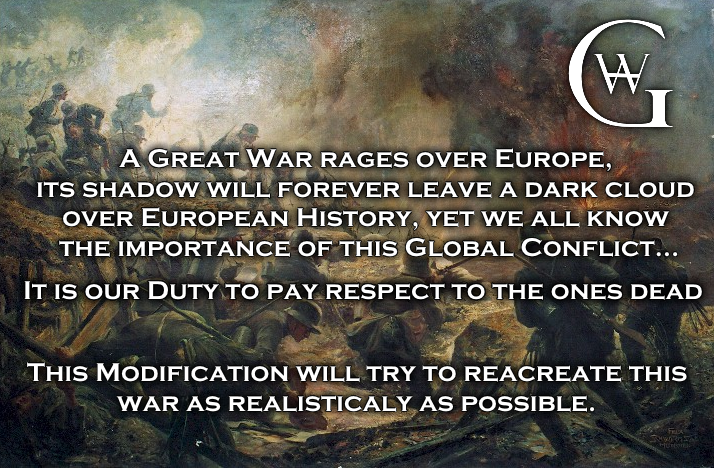 This is a total Overhaul Mod for the game Gates of Hell and Men of War Assault Squad 2 (until Gates of Hell is released). This mod will bring World War 1 to the world of Men of War, maybe there are mods like World War 1 Realism or All Quiet on the Western Front, yet my mod will cover the entire World, each front and i will try to represent the smallest detail in the most accurate way possible

The content will be original and unique, from the smallest wrench to an entire map.

Back into the Modding

Such a long time..

Why it took so long ? Well i had some problems and decided to leave the modding community forever or atleast until Gates of Hell would be released, but i started to understand my project would be lost into the void of death mods (well i guess it already did) and i came back into the world of Men of War modding with new skills and better art that would make you guys happy. So here is my plan

This is my comeback plan, simple for me, and maybe also good for you except the release will come hopefully the next year when we will celebrate the centenary of the end of World War 1, why ? The work will be hard and i will try to add as much content as I can because i am the only person working on this mod and i will use 100% original content, so i want everybody that wants my content in his mod to ask me before they do it in case that content is released. Ok so back to the subject, the time until the release will be so long because i will also add all the fronts of WW1 (because my hope sof a cooperation with Guerrito is dead) and work hard on every detail possible, images of the units, weapons and vehicles will be soon leaked to the public, (i will start showing of smaller nations). I will also release a Dev Diary each month

I hope you guys ill appreciate my work, and hopefully we will change the mod page to a new one

Moving to Gates of Hell

Gates of Hell is an incredible game, better than MOW AS2 in my opinion and i guess yours so i took the decision to port the mod there after the release.

Mod plan Z meant to ressurect my mod, may live in armony friend !

Listen up soldiers ! Are you a watcher ? IF NOT, Join the watchers of the mod today !

Dear Sir/Madam
How are you,is everything alright?
How does mod progress goes?

For all your questions concerning the release. I wanted to release a demo version on the 11th but the circumstances couldn't have allowed me this. Also working fot a certain release date adds lots of stress and this produces errors in the script, leading to the "bugful" last year's release. I want the mod to be as good as possible so this take time.

i will stay waiting.

Sadly due to problems in my private life development will be halted once again. Just so you know huge progress is made regarding game script, historical accuracy and game art.

Tessel for MowAS2 by Bassmaniac Men of War: Assault Squad 2