THE CONFLICT
For nine years, the vast military industrial complexes of the Soviet Union and United States of America have waged an interstellar war across the hundreds of human colonies dotting the galaxy. Powered by alien technology recovered from a massive installation on the surface of the moon, the forces of both nations are seemingly incapable of breaking the stalemate, but are soon visited upon by a titanic invasion of an alien empire known as the Sh'we'pel, seemingly bent on harvesting mankind for an unknown purpose. Populations are destroyed, whole armies are thrown into chaos, entire planets burn in the wake of this new onslaught, and among the ruination, the human forces begin to uncover the true nature of who controls the destiny of the universe.

THE MAJOR POWERS
United States of America: Relying on innovative new technologies and advanced weapon and computer systems to gain an edge on the battlefield, the United States is an enormous Federation of colonies ranging from unmemorable agri-worlds to sprawling urban industrial planets. Emphasizing extreme mobility and speed in combat, the military machine of the American empire utilizes highly maneuverable combat exoskeletons, computerized gyrojet ammunition to highly lethal laser cannons. However, due to the high draft rate amongst colonists, as well as the lack of major federal aid to these colonies, the United States has been plagued by dissent and unrest in its outer worlds, and in its war against a numerically superior Soviet foe, this has suggested its role as a superpower may come to end.

Soviet Union of Socialist Republics: Mighty and stalwart, the armies of the Soviet Union rely on awe-inspiring firepower and relentless force. Using such technologies as powerful railgun weapon systems and advanced vehicle movement systems, the military of the Soviet Union functions like a great hammer and anvil, drawing the enemy into a corner, and utterly smashing them. However, the USSR has bore the worst of the Sh'we'pel invasion force, severely draining most of their forces, and forcing them to redeploy most of their troops from American territories to combat this alien threat.

Sh'we'pel Invasion Force: Striking without warning and wielding weapons of unspeakable power, these alien invaders have pushed deep into the Soviet territories, and caused severe havoc in many American systems. Seeming to be fiercely traditionalist and caste-based, their military has been identified as being commanded and fielded by a species of avian xenos with apparent latent psychic abilities, while using a sub-sentient species of reptiloid as expendable shock troops and slaves. Their favored tactics seem to be occupying the primary armies of a military force with overwhelming numbers of shock troops, large armored walkers and heavy bombing, while simultaneously disrupting and eliminating targets of vital tactical importance with specialized troops. Very little is currently understood about their civilization and culture, and their long-term goals are currently unknown.

GAMEPLAY
Gameplay in 2074: The Anangke Anomaly is going to be radically different from Starcraft II's. Commanders will no longer be required to manage base construction and resource control, as units will be selected, upgraded and deployed before the battle even begins. Strategy will be given a greater emphasis in the single-player campaigns, with commanders being allowed to choose where to deploy their forces in a combat zone, and how their army should be assembled. Battles will be fought in a far more realistic manner, with mechanics such as tanks only being vulnerable to dedicated anti-tank weaponry, and units being replaced via a reinforcements and supply system. Commanders will no longer rely on creating additional units from factories, but must be much more conservative and tactically-minded with their troops.

The intelligence report you requested concerning the development of the conflict along the southernmost continent of New Washoe has been completed, though at the time of this transmission the battle conditions may have changed dramatically. The Soviets have maintained control of the planet for 76 hours as of this message being sent, and have used this advantage to destroy any remaining airspace defenses on the planet's surface. Orbital bombardment has thankfully not been used, however the inability of Army forces on the ground to combat Soviet airstrikes is hardly much more preferable. Most of the planet's civilians were either evacuated prior to the space battle or subsequent invasion, though there are an unfortunate 200 or sothat have been forced to move into refugee camps far from the battles, as the Soviet air forces have not shied away from bombing the townships. 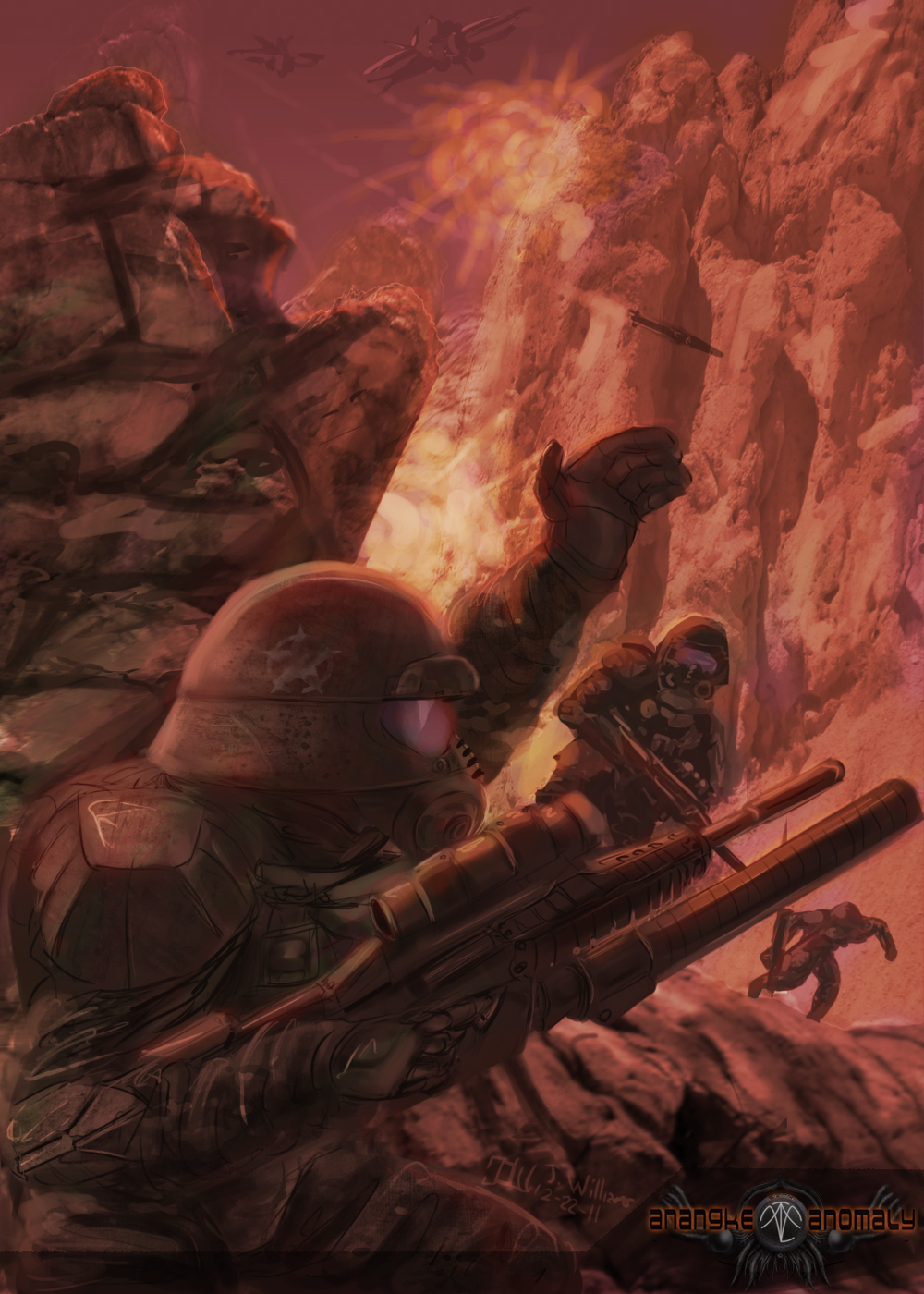 The addition of heavy Soviet airstrikes has resulted in approximately halving the total force of the 19th Battalion, making armor their primary target (E Company was interestingly unharmed, despite being the Battalion's artillery company; this is most likely the Soviets wishing to avoid heavy damage to the power and mining installations for later capture). C Company, along with the remnants of Armor Company D, have successfully routed Soviet troops into the large valley to the north of the Weston power complex, where they were subjected to heavy shelling from E Company, though this is likely only a temporary deterrent. 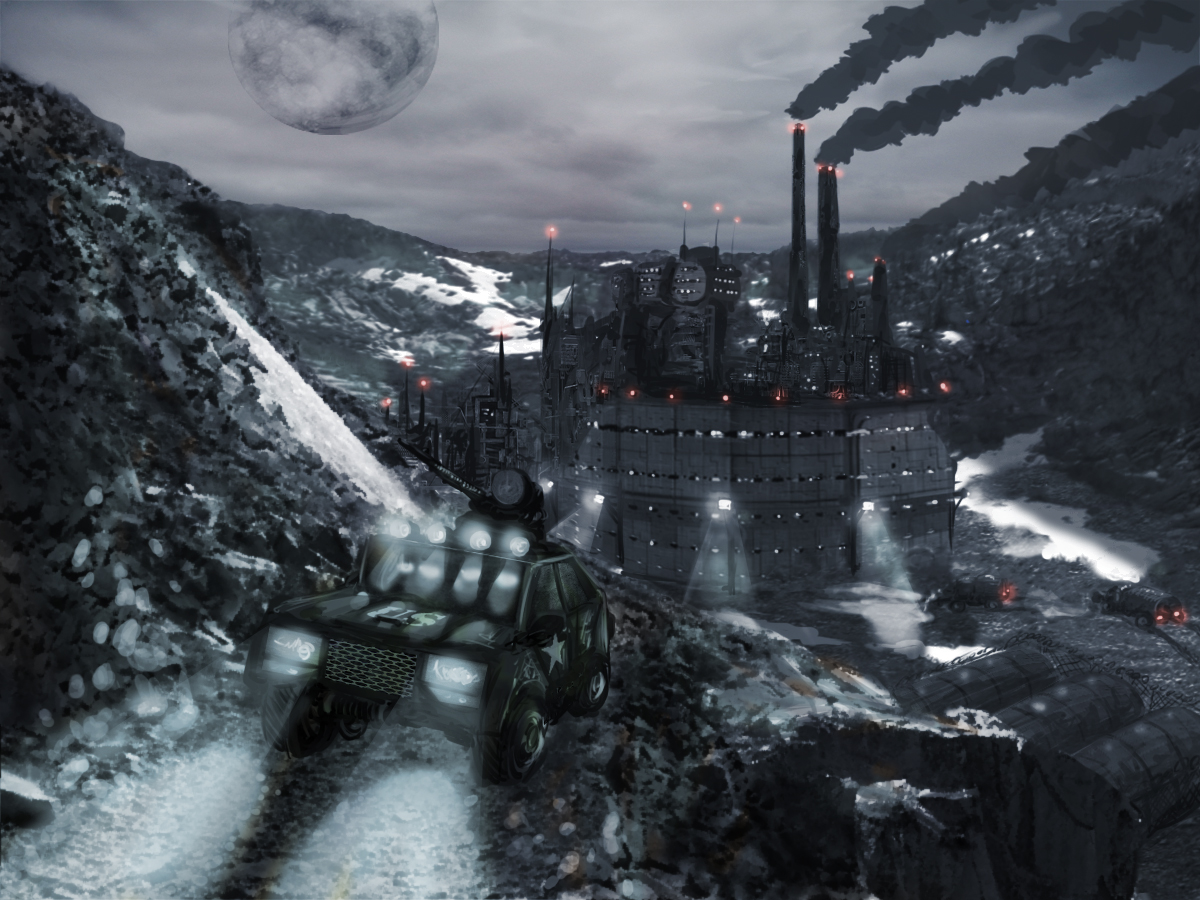 With the Battalion's armor almost completely destroyed, the Soviets are have begun deploying their own armored units en masse in an attempt to smash the remaining forces defending mining installation B and the Weston complex (I would anticipate our forces on the ground attempting to concentrate their forces defending the latter, however this may not end up being the case). Short of naval reinforcements, I sincerely doubt our own troops can successfully hold their positions for much longer (a generous estimate would give them a week before they are subjected to bombardment out of frustration from Soviet command).

While I believe the battle for New Washoe is lost, I think we could at least gain a little hindsight from this attack, along with other worlds that have fallen to the Soviets in recent weeks. It appears this subsector was picked to the field testing grounds for some new weapons in the Soviet arsenal. Some you may already know you might already be familiar with, however you would do well to familiarize yourself with these weapons. 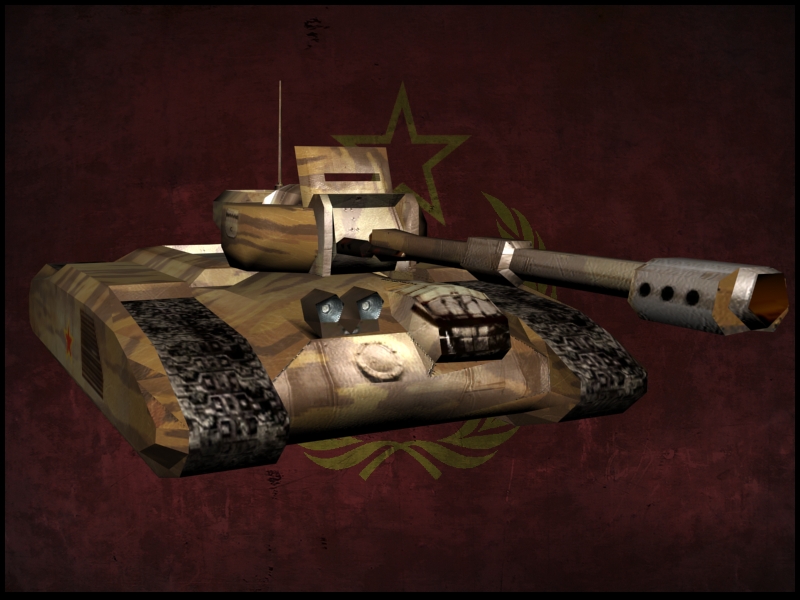 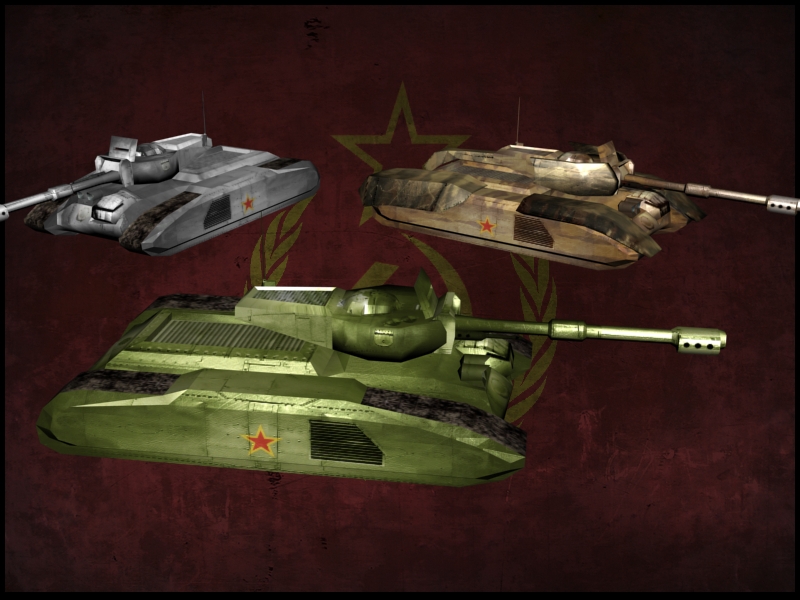 Notes: This vehicle has been actively deployed for some time now as I am sure you are aware, however it has recently become the mainstay of Soviet armored forces. Despite its antiquated appearance, recent battles have shown its inherent design philosophy is in mass-engagement, with the tank rarely being used without addition kin. Just as the more recent T-57 model, it is incapable of successfully engaging our own MBT head on, however it seems this model has been brought back into service with an upgraded engine and a modified armor type (some theorize they might be failing to produce T-57's fast enough, but intelligence is unable to confirm anything yet). Some post-battle analysis shows these tanks are best handled by assaulting them with an equal number of our own tanks; anti-tank teams and fixed weapons are more likely to be mauled under their treads due to their rapid speed and high numbers. 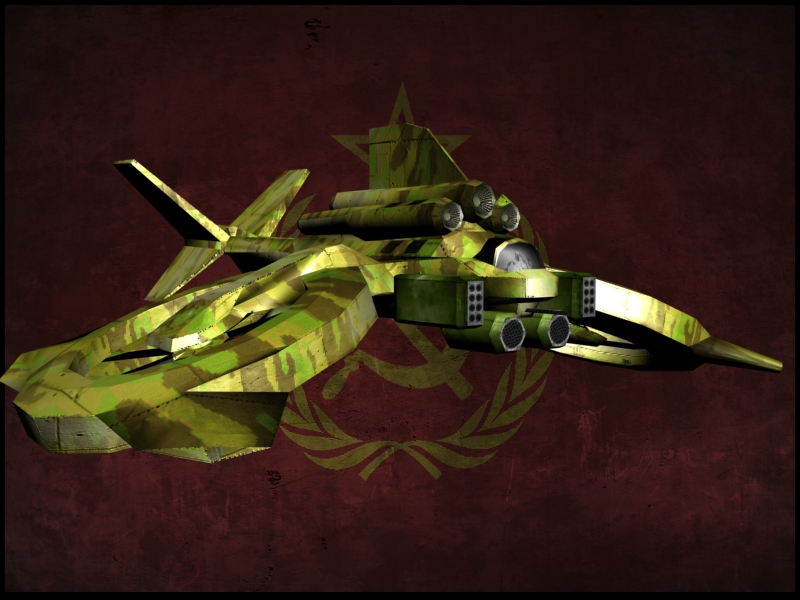 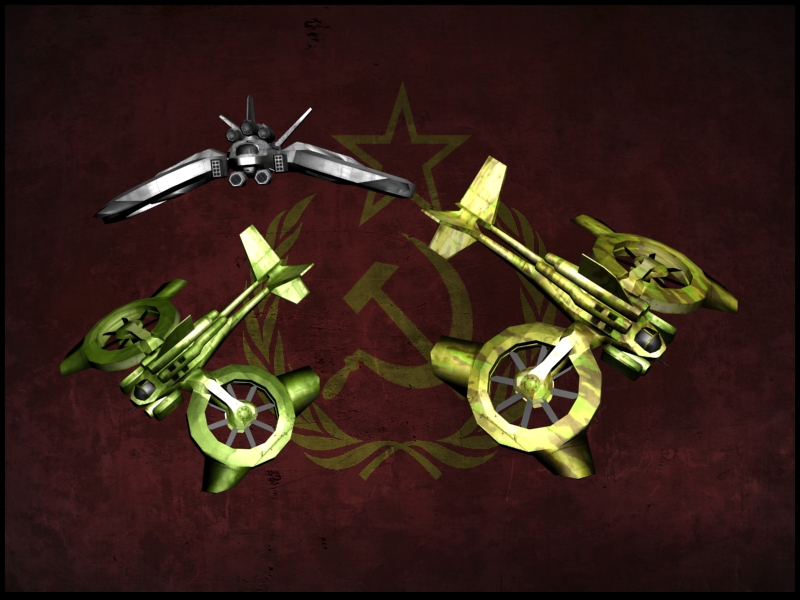 Notes: These have been buzzing around the battlefields with an annoying frequency as of late. Replacing the old Chu-12 series, this one appears not to be mimicing our own gunship but rather taking the idea into an entirely different path. What it lacks in armor plating and firepower it makes up for in the ability to get around faster than anything we can pull out short of a strato-bomber. The Reds seem to like using them in pairs to soften some target and then zip away, and then while our men on the ground are left dazed they rush on through with armor. Those missiles don't help matters much either; remember, these were the things that wiped out our tank companies on Washoe so quickly. 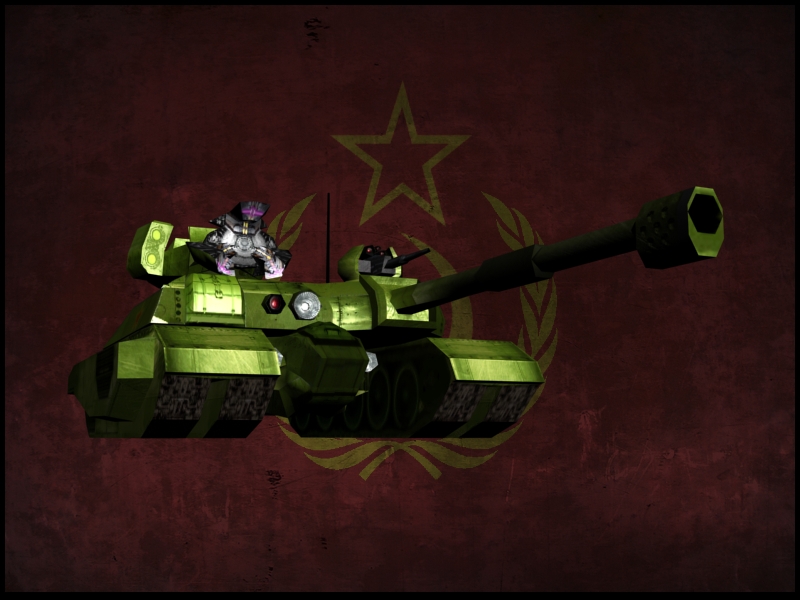 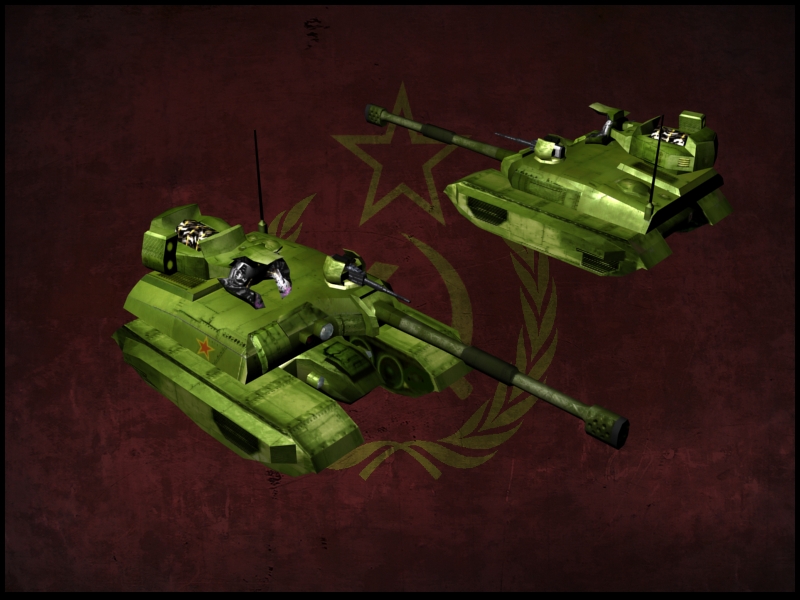 Notes: This beast is the Soviet's latest toy (in fact New Washoe may have been the first colony it has seen battle on). Some intelligence reports estimate that this tank has been in development for over two decades; I recall some commanders from '65 laughing at this thing because they thought the Russians were trying to bring back the heavy tank concept. Turns out that huge turret chassis is there to contain the thing's power plant. All those decades of research were apparently for this monster's SHIVA system, a sort of electromagnetic-pulse cannon. This gun fires and knocks out every piece of electronic equipment in a good 60 foot radius. Its big weakness seems to be small groups of AT infantry hitting them in the flanks. Unfortunately that means getting pretty close, and the Reds aren't dumb, they'll escort these bastards with smaller units to prevent just that.

I'll keep you updated on the situation on Washoe, as bleak as it may seem. Hopefully NHC will reinforce our line with some more boats, but I think our particular subsector isn't high on their priority list. Best thing to do is just bunker up and be glad we're closer to the inner colonies.

Hey this mod looks great ! Can't wait for it !

ok. wow looking out to it!

so this mod is just in the future like the originail starcraft II but then with a little more realistic vehicles and ****? awesome! ill track you and im looking forward to it. if i could mod anything i would've offered my help but i cant haha

It's much more of a "hard" sci fi than Starcraft. We're aiming to keep most of the technology within the realm of plausibility (for example, our space ship designs are based off of actual theoretical design for such craft, most weapon systems, such as the SHIVA Star, are weapons that current militaries are actually researching, etc etc)

Not to say there won't be elements of the fantastical, but they won't be as saturated nearly as much as with Starcraft's setting.

Yes, we will try to maximize the opportunities for combating the different playable races in all sorts of different situations, as well as the many other non-playable factions involved (which we will reveal in future updates)

You make it sound like a Starcraft II:Total War, now im definately going to track this but if you let me down...well just...dont >:3