A long wait, but a new release!

It's been well over a year since I released any new models, and I'll admit that my focus over the last year was on the Avania comic that is ultimately the source of inspiration for all these characters. But, as I make progress on that and the page count increases, I come up with new material and that in turn gets me excited to make more models. So for this release, I'd decided to take a third option and introduce an entirely new character from a faction I have not done much with until now: Ospria. Similar in type to the Avanians, but with a unique visual aesthetic that I have enjoyed designing. 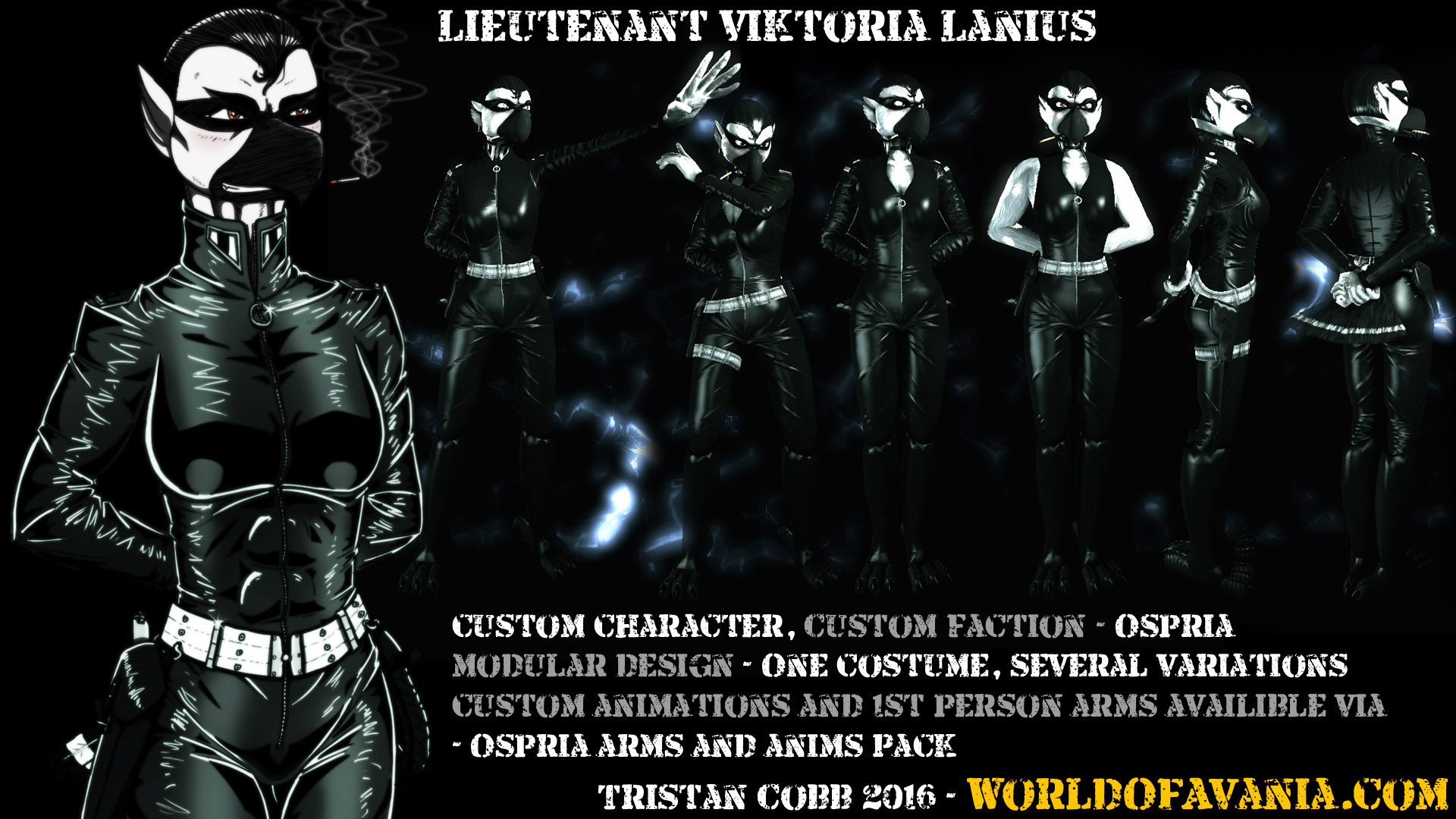 I hope to release a few more Ospran characters to round out their roster, but for now I hope you enjoy fragging with the playful and malicious Viktoria Lanius. Moddb.com

Feel free to comment, and be sure to let me know if something doesn't work! If you like my characters or are curious about their universe, check out Worldofavania.com to learn more!

Without further ado, I present my latest custom models for UT3! I recommend downloading both packs (of course) as this not only increases your total options for customization, but they were essentially designed to together and released separately for better portability. Moorsley and Mayfaire are Black Lanner mercenary pilots, much like Pennrose and Charolette, and the Black Lanner Pilot Pack provides the common elements of their flying uniforms, and accessories such as their helmets, oxygen masks, and headsets.

As always, ratings and comments are appreciated! And be sure to let me know if something doesn't work.

Just wanted to post an updated video of my character models live in game. This time featuring a mod of a mod that I have been working on to incorporate more thematically appropriate weapons into my overall mod experience.

Also, stay tuned for more of Avania in my digital comic, which is coming soon to www.WorldOfAvania.com and will also be available in traditional form on Comixology!

First and foremost, I just released a rather non-canon mod for the UT3 Demonus faction, and one that is unabashedly fanservice-y, even if I myself am the fan in question. Never the less, I hope you enjoy the new Demonus Skirt Pack. Play on one of the Japanese-themed maps while listening to the your favorite highschool-based anime soundtrack for best effect.

In other news, I have a bit of content still to be released, including an Avanian weapons mod, which may be combined with my mod of Jackal Stomper's Hobo Knife Fight: Avanian Hobo Knife Fight The Avanian Combat Mod, which will feature sword, rifle, and bayonet combat. That might be a ways off, but I do hope to release it eventually, to tie the character models together with the gameplay.

And in other, other news, I'm also working on an official Avania comic, which will supposedly occupy most of my free time over the next year or so. Check out www.TristanCobbAnimation.com for more info, until I get the official website up and running.

So long for now, and thank you to everyone who is enjoying my mods, and to those who have provided feedback too!

All Characters Update! And Some All-New!

It's been a while since I've made an update, but this is a big one! All characters have received something new, though the main focus is completely remastered textures for most Avanian characters, and several new costume parts for Hans, Pennrose, Johannes, Farus/Wess, Ress (whose pack now includes the parts for another character - Eraclare), as well as an entirely new character - Charolette! Both the Avanian and Demonus Custom Arms/Animations packs have also received updates, featuring new idle animations and taunts! If you enjoy using my models, this is a great time to update!

*All characters now have eyelids, and have had their portraits updated to the current mesh and textures.

Hope you enjoy! And as always, there is much more in-store for the future!
Feel free to contact me with questions, comments, or to report any issues you may have.

This is a large update to all Demonus characters, plus Pennrose too, which adds physics controlled tail bones and proper tails. The tails themselves are contained in each of the individual character files, but to make use of the physics you will need to install the latest version of the Demonus/Avanian Arms and Anims pack, which contains the new skeletons, physics assets, and updated family information. Watch the update in action here: Youtube.com

Note: If you would like to have the updated characters, but aren't interested in using the tails, I have included optional UTCustomChar.ini files that don't use the tail meshes.

Either option you choose, I recommend that you rebuild your main UTCustomChar.ini config file by deleting it and letting the game create it again with the new character/parts data when you next launch UT3.

Texture updates for Avanian characters will still be incoming, though I will likely just remap and retexture most of them from scratch.

I have just released Ress 1.0, as well as updated Miriana to include some new parts based on Ress' costume. One thing you may notice is that the file size of these two is far less than previous characters; this is due to all of the texture maps now being sized down to 1024x1024 with compression enabled.
After performing a number of comparisons and experimenting with file settings, I determined that (at least on my 1920x1080 display) the 1024x1024 maps look as good, if not better, than the previous 2048x2048 maps. You may notice a difference if your entire screen is filled by chunk of character, but otherwise I there is much visual difference in texture fidelity.
I also remade the specular and specular power maps now that I understand how they work a little better, so costume elements such as metal and leather will now be more appropriately shiny and/or glossy.

So far Ress, Miriana, and Alders (soon to be updated) have these map updates completed. I will be updating the other characters as I have time, which should not only reduce their file size requirements by a large amount, but also give them some added polish. As always, I always appreciate any questions or comments you may have.

I also noticed that there is an issue with swapping hair between Demonus characters that causes their ears to be the wrong color, due to the ear textures being stored in the hair's designated coordinates. I will be remapping all head UVs and updating the textures accordingly.

Demonus 1st Person Arms and other updates are out!

I just submitted the Demonus 1st Person Arms + Custom Animations for approval, and I also updated the Avanian 1st Person Arms with rigging improvements, as well as giving all three current Demonus characters some new costume variations and making their white uniform jackets change to solid blue or red for team games since they were difficult to identify previously. Demonus parts are now quite interchangeable and allow for some cool combinations.

Like I said earlier, I am still working on new characters, and I also want to release an NPC parts pack for the Demonus faction too. Thank you for your support, and as always I welcome your comments!

I have recently started working almost full time again, so I have less of it to devote to modding work, but never the less I will be updating several characters with texture fixes and new costume variations, as well as at least one set of first person arms for Demonus faction characters (I say at least one set because I have at present two possible skin colors, plus gloves to choose from). Much like the first person Avanian faction arms pack, I'm also planning on adding some custom animations to the Demonus family when I publish the arms pack.

Further into the future, I have one more character already partially built, and at least two more planned, plus several new heads and variations intended for NPCs. Thank you to all who are interested in my work, and please feel free to comment on my models.

Having gained some experience and insight over the course of building more character models for UT3, I did an across the board update to all of my character models with the aim of standardizing seams for compatible parts. Not all parts are universally compatible due to specific body shapes, but most regular shirts and coats of the same materials should fit together without gaps now. There were also a few miscellaneous rigging issues that I fixed or improved on.

I suspected that having the specular and specular gloss maps also at 2048x2048 was eating up file size without actually contributing to texture quality, so I reduced them to 1024x1024, saving much in file size and not reducing quality as far as I can tell. I also ran a sharpen filter over all of the exported maps which seems was an easy way to increase fidelity. Lastly, I added some extra detail to the normal maps of all characters, making subtle but hopefully noticeable improvements to how they are lit.

At some point in the future I would still like to go back and re-unwrap my older models to use more efficient UVWs and achieve the higher texture resolution of the newer models, but I think that I will probably end up making at least 2 more characters first before I start doing any major renovations.

All Characters Update! And Some All-New! by Tristikov Jan 15 2014

New content and updates coming soon by Tristikov May 8 2013

Demonus 1st Person Arms and other updates are out! by Tristikov May 13 2013