Started Modding Games back in 2003 - spent long hours making maps back on Warcraft 2 & StarCraft back in the day. Changing Animations & Sound Files to the orcs and humans was what got me started on Modding games as an amateur hobby.

I am not any kind of programmer, however, I have edited numerous scripts and created tons of content for..

:Lord of the Rings - Authored 800 ABC's for missing music - Macro/Scripts

:Lots and lots of other games.. 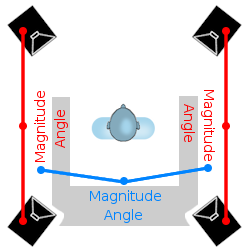 Vorbis windows all use the slope function

OGG Files aka. Vorbis was developed from day 1 to encode surround sound. Exactly 255 channels can be utilized, Support & playback aspects reference an arbitrary number of channels. Vorbis reference software designates arbitrary 'couplings', allowing multiple channels to minimize encoding redundancy, through inter-coding. Vorbis formats are large when using on-the-fly encoding via RAM, to optimize this OGG's with more than two channels are encoded with all channels discrete. The best hope to permanently optimize the Vorbis format would be via the Ghost Codec which uses Ambisonics. (Ambisonics leave channels un-coupled, using Ghosts 'Coupled' form.)This is all very RAM intensive unless you stream the OGG's from the HDD/SSD instead of the RAM. I am testing these concepts as well as actual "LAB" work to verify true 5.1 at some reasonable level.
INITIALLY...It is most likely that ONLY RAIN will function well in-game as it is infrequently accessed & least likely to crash M&B or its MODs. In other words...OGG's suck most of the time for Repetitive sound fx, but if you use 5.1 sources in a rare occasion you can probably get away with it. So if the THUNDERSTORM 5.1 tests lags combat too hard during a RAINY BATTLE - then 5.1 is probably a waste of time altogether...this post is mostly for me as I only use my BLOG for testing & as a soundboard...comments are always appreciated either way ;)

just wanted to say hi and thanks for all you do for us , jay / SGT.ROCK

:: BFV MAP NOTE :: There's a ton of work and render time when making a MAP at high production values. The shadows sharpness & color, the tilting of objects to align with sloped terrain, adding details to buildings like radios, chairs, beds, pictures, propaganda posters & ladders/stairs. Then the small things like mini-map details, spawners, skyboxes, light-sources, pathing for bots, textures that are smooth, polygons that don't look edgy or 'fake'.

I even left out all the scripting of the actual bots...basically if I wasn't a BFV junkie the FORCEPACK MAPS would not exist or at least without bots and highest render quality!