Pompi Pompi Entertainment is a one man indie company. Ofer is doing all the art work and programming, although the music and sound assets are outsourced.

RSS Past projects and a new development blog.

I have created a new development blog at www.pompidev.net

This is a short and incomplete article of my past experience at making games, and the second blog post from my new blog.

In 1996 school summer vacation, I took a class about the C programming language.
Ever since I have been trying to create games and simulators, but rarely finished any game, because I was making over ambitious games.
However, I did gain valuable experience while trying.
My first completed game, was called Fatal Wars. I started selling it at about 2003.
Fatal Wars was similar to archon, a game which looks like a chess game.
However, once two pieces enter the same square, a new screen open, and the two pieces fight in real time action.
The game was written in C(not C++!) and had a lot of bugs.
After two months that I saw I cannot help people solve their problems with the game, I decided to pull the game "off the shelves".
I remember one guy I was exchanging emails with, he got a black screen and I couldn't help him out. I still have his name and email, which is not valid anymore.
And if you are out there and reading this, I will be glad to talk with you again. :) 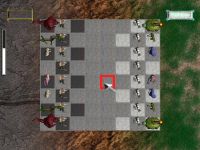 Fatal wars took a year to produce, but I knew I did something wrong.
I needed to figure out how to make a game that won't crash, and if it has to crash, there should be a proper error displayed to the user, and a way for me to know where exactly the error occurred.
After Fatal Wars I went to university to study for a bachelor degree in cs.
While studying I Started to work on the first incarnation of Labyrinthica: The quest of lima.
A 2D turn based rogue game, inspired heavily by dragon crystal.
Soon university became too demanding, and I stopped working on game development.
While I was advancing torward finishing my degree, I got back to writting games.
One of the games I started and didn't finish, was Cyclic Dimensions.
I made many attempts to create star control like games, but Cyclic Dimensions was an attempt to take star control into the 3rd dimension.
The game supposed to have several ships to pick from, and then the ships could duel each other.
The game was a first person view(from the ships cockpit), and you could fly freely in the 3D space.

The special thing about this game? Much like star control, the world you are fighting in is cyclic.
In star control when you fly enough to the left of the screen, you would eventually appear on the right side of the screen.
In Cyclic Dimension, the two spaceships are inside a 3D box, but if you would fly to one edge of the box, you would appear in the opposite edge of the box.
I have digged up my old code to capture some videos from the unfinished game.
The first two screenshots and video just show off the space ships: 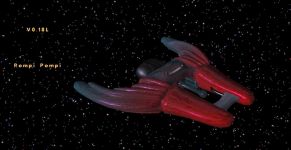 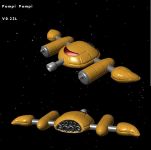 The second video supposed to show the cyclic cube.
The graphics are a bit broken and some visuals and effects are missing, but I hope this will make the concept clear:

The reason I stopped working on this game, is that I found out the only strategy when fighting one on one in a 3D space, is just to orbit each other.
There was no point in changing direction.
I think that maybe a multiplayer game with more than two ships fighting inside a cyclic cube might make a very good game.
But it something you need to try before you know if it will be any good.

That's it for a quick history lesson.