Big fan of Metroid, Stargate, Star Wars, Halo, Legend of Zelda games, Advance Wars, Avatar: Last Airbender, DC, Marvel, and over 95% of all Anime. (Okay maybe not 95%, 50%) Any images I post here on my profile are mine unless I say I found it on google or somewhere else (If it's not a video game screenshot, it's not mine) I've changed my username from Admiral Ace to Admiral Ash to partial resemble my username on other sites and my Minecraft username, AshUzumaki 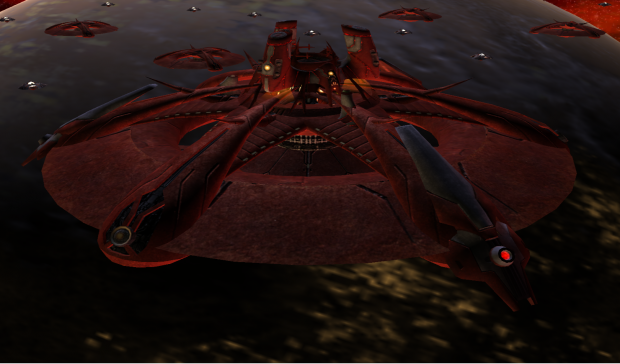 Based on the game Universe at War:Earth Assault

The last ship (for now)I made for the Hierarchy. Again more map editor magic was used, I didn't make a new model. It's just the Hierarchy unit transport, enlarged with some attachments to it.

It'll just finish with the ingame description I had used for the ship, or at least the placeholder version.

"Largest ship in the Hierarchy navy, the Overseer is not a new design, but an old one repurposed and brought into service by the threat of the humans and their allies. Armed with multiple plasma cannons and torpedoes and more squadrons than most Hierarchy ships. Named after the Overseers, leaders of the Hierarchy, the name fits the ship as they serve as the flagships of many Hierarchy fleets."