It has been a long time since my last blog post. Well here it goes.

So I came across this mod a while back called DayZ. DayZ is an online zombie/survival modification (mod) for the military simulator Arma II and Arma II Operation Arrowhead well known for its huge landscapes and "realistic" approach to military warfare.

I had the free version of Arma II so I couldn't get it. But after I saw some videos and heard other people talk about it, I decided to get Arma II Combined Operations on Steam and give DayZ a go.

At first this mod was hard, then it became even harder. But I got the hang of it and started surviving, collecting food and drinks as well as other items such as weapons and ammunition.

Since you start out with pretty much nothing but some bandages and a can of beans, finding food and water is right away your first priority. Knowing how to avoid the zombies is an important part of not getting killed.
By the way, did I mention that if you die you lose all your items and have to start all over again? Yes. DayZ takes that daring approach to gaming where it forces its players to take it just a little more seriously than your average shooter. This and the fact you play with other people on online servers, almost makes this game an MMORPG.

I have been playing this game for about four days. Luckily I can say the hours I've spent alive outnumber the times I have died. Though dying itself is always a new experience on it's own.

Yesterday, with my character who had found a larger backpack, an AK-47, a pistol, a tent, plenty of food and many more interesting items, I found myself in the position of having a teammate that I didn't know outside of the game.
He had a car and was looking for fuel and I was just interested in a multiplayer experience, so he and I teamed up for a brief period of time before he axed me in the back. He killed me and most likely took all my items.
It should be said however that I didn't really get angry because of his actions, in fact it very much added to the immersion of the game. Who can you trust, who can't you trust?

It was around this time I realized that the zombies in the game don't really add to this immersion but rather take away some. The zombies have poor animations, very static behavior and there are only a few variant models. They are guaranteed to spawn near buildings and will chase you if they spot you.
They are annoying, but not much else.
This is why I believe that DayZ should be a game about survival, but without zombies. Naturally it would make the game more empty and also mess with the game's balance. And I suppose the title wouldn't fit either.
Still, a survival game in a post apocalyptic environment, this is a game I'd definitively buy and play.

As it is now however, I'll keep playing DayZ. I got the idea to make a journal, a record to track my steps.
Here you can see my progress on day one with my current character. 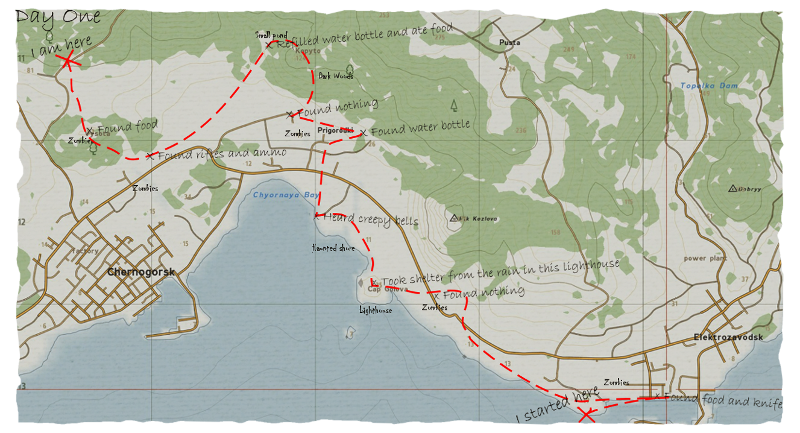 Continuing from here I went south (left on this map) 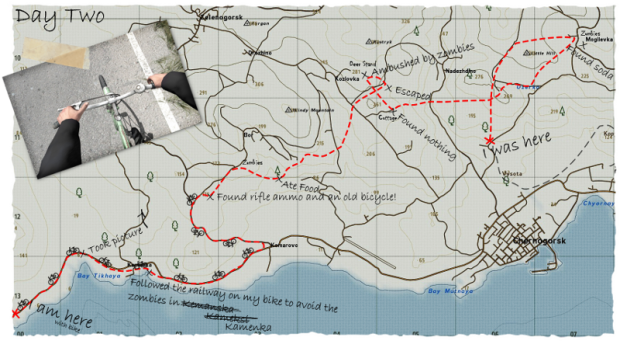 And then I went up 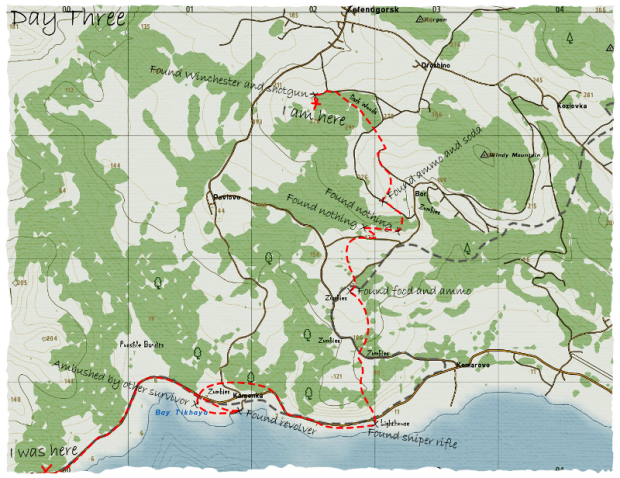 As for other things. I'm looking into getting Zbrush to replace/add to my current 3D application. I have yet to see the Dark Knight but they say it's good and uh... That's it for this post. Have a nice day!
Admiral Skeybar

I can openly admit that what makes DayZ really stand out to me is the wariness one must have towards other players. To me it really mirrors how people may act in the state of a worldwide apocalypse; when the few survivors left out of settlements look out for themselves hoping to live to see another day.

If the day comes when the zombies act more appropriately with less jerking, lagging about and with a "life-like"(-_-) nature, I could imagine them becoming a lot more interesting.

A game set in a post-apocalyptic environment without zombies? That sounds like gamer bliss to me. I could imagine something similar in the Fallout universe (or otherwise similar). Maybe without the mutated beasts though, or heck, who knows?

Also I'd love to know, did you draw on a map yourself as you went on, or is that by chance some sort of program that tracks your general movement? I am probably over thinking it though :P

Agreed. The way players interact in DayZ is what makes the game really interesting.
The thought also crossed my mind if people would really act in this manner if there would be a real apocalypse.

To me, an apocalypse game would be best if it went for a similar style/theme as in the movie/book "The Road". (maybe not as extreme though) Imdb.com

As for the map. I made it by using a screenshot from the ARMA II map editor and then added the path I took from memory when I stopped playing.
I also just updated my blog with a map of the path I took today, there I did take notes as I went along so it's more accurate than the first.

And how I track my movements, well since I always use a map in the game, I usually have a fairly good idea where I am. I just need to remember where I had been and then fill it in on map. The program I used is The Gimp. =)

Meh, tried to PM you but for some reason your profile name does not play nice with the messaging function. I'm all up for company on dayz whenever time allows :)

Ah yes, for some reason some people cannot PM me. I thought that for a while ModDB had that problem fixed but now it seems it hasn't.

I'll send you a PM instead, that will most likely work. =)

For a while now i wanted to play this mod so badly but i lost the job few weeks ago which means i got no money for Arma II...

That's a shame. I hard a hard time deciding whether or not to get ARMA II but in the end I decided to go for it and not sure sure doesn't disappoint.
Though ARMA II without DayZ isn't really worth the money for me.

You should wait until they release the standalone version. =)