I am an indie game creator, my main studio site is at iterationGAMES.com I have been making games for many years now, most are freeware, and readily available around the net. I have completed Debug Formulation, an old-skool arcade style shooter with some strange twists. I am now working of The Mine a robotic mining ant-farm type design.

I get inspired by many experiences, and was recently playing a modern remake of an old formation shooter, I enjoyed that game, however it was a bit too far removed from the experience of the original I was expecting. I did some experiments to see how to code some swooping invaders that would leave a formation, drop some missiles while swooping at the player, and if they survived return to their formation. I was able to devise a system that generates some interesting waves of nasty attacking bugs. I was quite happy with the outcome, and continued to build a little game around this simple mechanic.

Of course I added many little twists on the simple idea. Allowing the player to wrap around the sides of the screen, giving them the ability to fold space and warp out of trouble, or simply to move faster to the sides, as modern HD displays are much wider than the old sideways arcade screens. I added a mechanic where destroyed bugs drop pods that must be further blasted to reveal power-ups, and if these are not captured buy the player the bug will re-spawn and just get more angry.

The demo is live now and I have submitted the full game for Desura publishing. 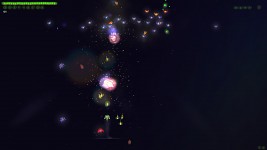