The ancient Infinite Empire was led by Rakata priests long ago and once the great plague swept the galaxy and the slaves rebelled including one of the more advanced slave-species, the Kumumgah of Tatooine the Infinite Empire fell.The Rakata lost their connection to the force and thus could not use their own force-fueled technology and retreated to scattered planets across the former Infinite Empire and many reduced to barbarism such as the one's tribe on Lehon, the Rakata homeworld. But some tribes across the galaxy realized that they had done great evil and began to redeem themselves.. The most well-known of these were an enlightened, technologically-advanced tribe on Lehon known as the Elders. The Elders were a force of good who helped Revan defeat malak and the sith once and for all.

This article will contain all battles from the timeline of: pre-Yuuzhan Vong war. This is being made so searching becomes easier.

Unconclusive victory, the destruction of the sith defenses around Korriban, forced retreat for the Republic, alliance between the Sith and Thrawn.

In an effort to take the homeworld of the sith, Korriban, the republic made a bold move, to first sabatoge the ships and space stations gaurding Korriban. The attempt to nuke the suface failed because the strike team was compromised and slain. The second attempt made by the republic was to send elite commandos to pose as sith troops and sabatoge the ships and stations when the bulk of the Republic fleet arrived to engage the forces above Korriban and eventualy to raze the planet itself. When the Republic fleet arrived at Korriban, the Republic Comandos already sabatoged the sith forces there. The Republic detonated their emps (at a safe distance) and disabled the Golan stations. The republic fleet quikly mopped up any remains of the sith over Korriban and began to bombard the planetary shield to allow for the planet to be razed. Before the planetary shields could be destroyed, Admiral Thrawn and his fleet appeared in front of the Republic Fleet, thrawn's weapon destroyed numerous republic ships. Thrawn imediately began sending boarding parties to board a few Republic Cruisers and Avenger's flagship. The boarding parties that boarded Avenger's flagship were quickly gased but for the other Cruisers that were boarded, they were routed to collide with Thrawn's forces. Seeing that victory is only possible with more bloodshed, Avenger calls the battle over and retreats his entire force back to Coruscant.Casualties:

Republic Victory, Elom succession from the sith, world gained for the republic.The Battle:The repulic saw Elom as a good planet to conquer from the sith (purpose held back for security reasons). The republic also learned that the sith had no presence on Elom. The native specious on Elom was loyal to the sith so the republic decided to bombard the capitol of Elom to destroy their security force. Hours later, the city was in ruins. The republic also jammed communication so the elom couldn't contact the sith. To hide this attack, Admiral Airaviper sent a small force to Thila to distract the sith. The sith ultimatly destroyed the force but at a cost. The plan worked and Elom is in Republic hands. The Elom also pledged themselfs to the republic.
Losses:Republic: NoneNative Elom: Entire security force, a million rebellious citizens, the capitol of Elom 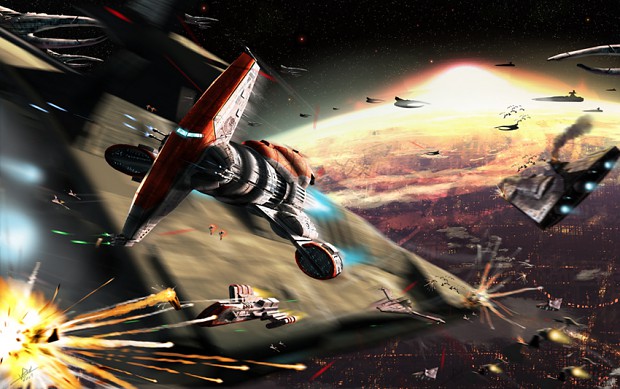 To everyone's surprise, Airaviper was slaughtering the sith. Ship to ship, station to station the sith's defences were crumbling. The sith were caught completely by surprise. Admiral Airaviper signaled General Avenger that the sith were caught by surprised and that most of their stations were destroyed. General Avenger came in with the bulk of the republic fleet and surronded the unknown sith lord's capital ship. Avenger concentrated his fire on the flagship until it cracked. As soon as the remaining sith forces saw their comanding sith lord's flagship destroyed, they retreated. Fondor's citizens found out of the sith defeat in space and revolted, they killed most of the sith forces gaurding the planet below. 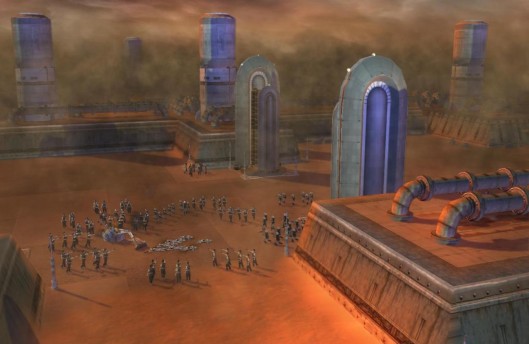 In an act of vengeance against the Sith for there slaughter of innocents across the Galaxy, The Republic's newest superweapon, the Defender of the core, destroyed the Sith world of Dormand Kaas. Sith forces in orbit above the planet were taken completely by surprise and destroyed instantly by the enormous vessel's gun batterys. Rest assured, this will not be the only planet to face Republic vengeance.

I don't like the idea of the republic destroying "dromund kaas" (not dormand kaas, or is this one of yur made up planets xD) after all, they are kinda led by the jedis, they would never let that happen.

well Johnyboy1 has not had time to edit much so yea if you joined, you could edit the articles

The Republic DID destroy Dromuund Kass. They said so themselves >.<

They need their republic. Without it, they crumble and fall

Yep they were proud about it to

The Jedi was not even involved. Lol