Ok this is a group who realizes that tharnis is corrupt and a idiot and is loyal to the original emperor who leads fairly. We have all but tharnis and his men of the new empire

The battle- Aol forces attacked the fleet over Naboo. Johnyboy1 then arrived and engaged only to meet 2 more fleets lead by Tharnis and Sab3r. Johnyboy1 was hopelessly outnumbered until the timely arrival of Lord_of_Pain. After exchanging fire, Headhunter and Sab3r boarded Johnyboy1's ship and began to fight defense. Johnyboy1 dueled both of them and eventually was trapped. While that was happening, Lord_of_pain was engaging Sab3r's fleet destroying most of it. Johnyboy1 sprung a trap that trapped Headhunter and Sab3r. Realizing that he would be dead, Johnyboy1 signals surrender. He then released the 2 captives and submitted to their prison while lord of pain continued to engage.
While Johnyboy1 was battling headhunter128 and sab3r, Lord_of_Pain led an attack on the Lincoln, one of Sab3r's flagships. With his battle droids he slowly fought his way to the bridge, aiming to take control of the ship, he dealt with all opposition that he faced.
With Johnyboy1 now succesfully transfered, Sab3r and Headhunter128 quickly flew back to the Lincoln to try and defeat Lord_of_pain, but he sensed their presence and he knew that he could not face up against 2 jedi generals with a large number of fresh troops, even with his droids. he new the only option was to escape so he commandeered a fighter and fled to one of his providence-class destroyers, while setting the battledroids to self-destruct. Surrounded by both Sab3r's and Headhunter128's fleets, he called in reinforcements to help him escape. He took his personal fighter while the newly arrived ships cleared a path to the lukrehulk. He managed to reach the lukrehulk and recalled all ships and retreated.

Outcome: AOL victory, capture of Johnyboy1, destruction to a fair portion of the AOL fleet, Heavy losses for the sith 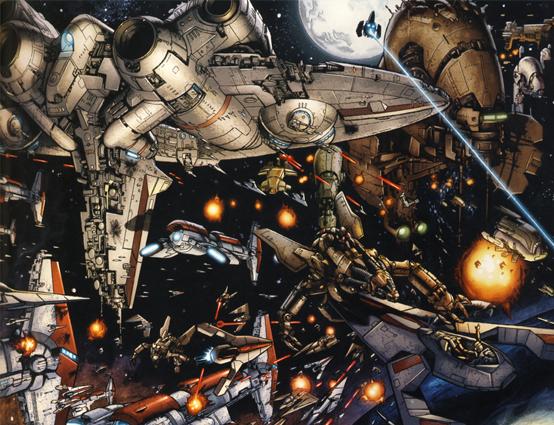 Johnyboy here are a few suggestions for you how to make your articles even better, there is a HTML button which allows you to change the background color to the standard black Darjetii background, and when you write your story first write them in a program that can notify you if you make typos and after you finish writing read through it and add stuff to make it bigger, feel free to imagine small details like Rogue Squadron fighting some elite Darjetii squadron in a epic dual.
In short: Add detail (ALWAYS), clear typos, Obi-Wan: use the HTML Johnny and read before post.

oh come Johnyboy, you can do better than this, I know you can <_<
the report must be OBJECTIVE.

Sab3r may have lost a lot of ships, but his force was small.

I was definately an AoL victory with minor losses Lol

Johnyboy, no matter how big your fleet was, you were outflanked by four parties...And there not that much cover in space xD

The Hapes Consotium
The New Empire
The Army of Light
And Sab3rs strike force (Consisting of Mon Calamari ships, they are famous for the shields).

Lord of Pain had two Lucrehulck + support ships against all of us and by then your fleet would have been thinned out to very little. The Lucrehulck is also more of an defensive ship, reliyng on it's huge fighter compliment, and we a a lot of anti-fighetr frigates to deal with that due to us being generally outnumbered by the Sith Empire.

But, I agree with Sab3r the articles you make should be more objective.

and i was there too, even if it was for a short time. and when i left saber took over the fleet for me.

Hmm it could go into more detail but its fine for me.

hey could i get the rights to edit articles