For the fourth time, MaverickServers is hosting a Quake 3 level design competition. Mappers from the community are encouraged to participate; veteran mappers and those looking to get into mapping are welcome to join in on the fun. Prizes will be awarded to the best maps. Sapphire, Wacom, Kot-in-Action and Massacre Servers are already sponsoring and there are more to come. The contest will start on June 2nd and run for 10 weeks until August 11th. Judging will occur for 1 week after. Registration deadline is on June 23rd. This group will track the progress of the maps, being created during this event. This reaches from scribbles, to blocking and alpha testing to the final mappack. Other material like for example interviews with the level designers will be released as well.

As already mentioned in the last article, here is the interview with martinheterjag, one drop out, neat new screens

So here it is, the second interview. This time with martinheterjag. Although he is pretty new to level designing for Q3A, he has already gathered a lot of knowledge in his early years by creating custom maps for Warcraft 2 with his dad. Have fun reading it!

News from the comp: Dervish had to quit. Already missing your map in the final mappack. Maybe next time. But still there are 28 contestants left!

A lot of new screenshots arrived with the beginning of the new week / secret word:
this time by phlOgistOn, waveshock, cityy and again kaffeewunder, noruen and dONKEY 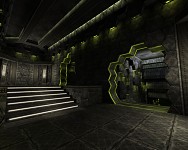 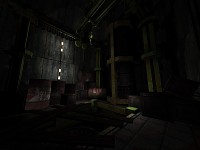 And now, we come to the main topic of this article, have fun reading it, and of course comment (maybe there are questions you want to have answered in the next interview?) 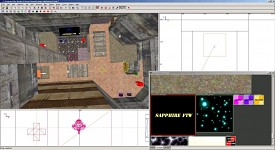 Bliccer (B:): Hello martinheterjag, please present yourself first. Where are you from? How old are you? What do you do professionally? Is there any website of yours?
Martinheterjag (M:): I'm Martin, heh, I live in Stockholm, Sweden, 25 years old. at the moment i work in a warehouse but I'll start uni this autumn to study electronics engineering. No website atm, except a crappy one I made in secondary school lol. thinking of starting a blog or something with maps and stuff, we'll see!

B: A blog with maps... which maps have you already released, are they downloadable somewhere?
A. I made a tourney map a couple of months back, was my first one for q3a. I have it in my dropbox, that's why I was thinking about starting a website/blog, to have somewhere to upload it to :)

B: What's the name of the map?
M: mhjtourney1, simple huh? Or actually mhj-t1 even more simple :)

B: Why have you started to make maps?
M: I guess I've always been creative, and I like videogames. I remember mapping for "Warcraft 2" as a kid. Me and my dad made single player maps for each other to play. Since then I've at least tried to make some kind of map for most games I played. Never been that serious though.

B: Did your Warcraft maps include stories? And were these your first contact with creating content for a game?
M: Yes, I guess it was. If the maps included stories? Not really, I mostly wrote ugly words with trees and spamed a lot of orcs everywhere :)

B: Which other games have you made maps for, besides Q3 and could you send me some screenshots of them?
M: I dont think I have anything left, didn't really make anything serious after all. Could try to find something. I have some pics of a "UT99" map I started to make with my girlfriend. I also tried to make some mods for "Diablo 2". 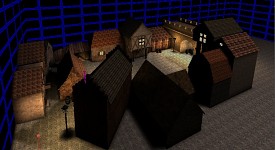 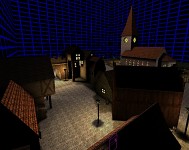 B: What are they about? Any links on moddb or somewhere?
M: No, I just got stuck, barely learned how to do it. Managed to add nike sneakers and some super op weapons. That's about it xD 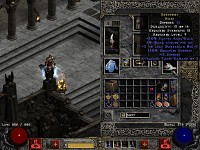 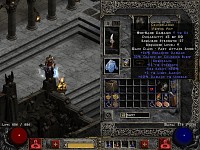 B: Do you remember when you've started mapping for Q3? What was your age?
M: I started to map just a couple of months ago, or maybe it was late 2010. Actually I wanted to map for QuakeLive. I never really played Q3A, but you can't play custom maps in QL, so I started to map for Q3A, its basically the same anyways.

B: Do you remember which was your first tutorial?
M: cityy had a great list with tuts so I read most of them simultaneously. Mapping for Q3A is pretty much the same as UT99. Well, I didn't have just one tut, I read them all. Basically all I could find.

B: What do you like more in GtkRadiant than in UnrealED and vice versa?
M: Radiant doesn't crash all the time. UnrealED was very unstable. But it was much easier to make stairs. You just made a brush and entered the number of steps and step height then you had your stair. It's not hard in GtkRadiant but it's much easier in UnrealED :D

B: Why do you love mapping?
M: Well, because its fun. I just like to build stuff. It's hard to explain. I've always liked to do creative stuff. Like art and music and such, mapping is basically the same.

B: Do you have any pictures or songs created by yourself?
A. Not sure. I mostly just jam, don't record much. Might have some pictures of my paintings, but haven't painted since I was 18 or something.

B: Do you get inspired by drawn pictures for mapping?
M: Yes, I get inspired by most things actually. I mostly look at photos of different environments or just run around in q3 maps that I like. But most of the time I just ask my girlfriend what she thinks would look good :D

B: So she is into mapping or Quake, too?
M: Well, she lives together with this geek, she doesn't have a choice xD
I think she would like to map but doesn't know how to do it. 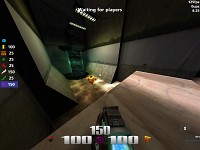 B: Why did you sign up for this competition? When was the first time you heard about this competition?
A. I heard about it just after the last one ended, I think it was then. I started to map, so found it while looking for Q3A maps and tuts. I signed up because I wanted to show the community what I do I guess? :) Thought it would be fun to get to know some people with the same interest.
Or actually it was just a reason to make a new map :)

B: So, what's your theme of the current map for the competition and how did you come up with the idea?
M: It's just a lot of concrete!
haha
It's a jail-carnival-industry-scifi mix or something. When I started the map I didn't have a clue about the theme. I just focused on gameplay. Then I downloaded some textures from cgtextures.com, mainly to have some color on the map. It's boring to look at the same textures all the time :) 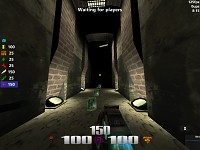 B: What were your references to choose this theme? Any links?
A: I just got these concrete textures so I did some temp texturing. Looked kind of like an industry. So, I just kept doing the details in the same theme. The teleporters and jump pads turned out pretty scifi-ish. And I added some barbwire for coolness, so it looks more like a jail.

B: And the details just popped up in your head?
A: Yep. I needed some light so I made some lamps. Then I just made some more details in the same style.

B: Alright, nice. "Focusing on gameplay", how did you start your map then?
M: I drew a little sketch in paint. It turned out pretty bad after testing so I remade it a couple of times. Now I think it's ok, not 100% sure about it though.

B: And what were the next steps after scribbling? Rough blocking?
M: Ye. Just wanted it done fast for a playtest. So I did that and played it with a couple of QL clanmates.

B: Which gameplay have you chosen and why?
M: It's a single atrium 1v1 map. Really small. I play mostly duel nowadays, so I know what I like and don't like, mapwise. If I would make a 4v4 map it would most definitely turn out crap or at least less awesome :)
I work pretty much now and a small map takes less time I guess, hehe, im lazy.

B: You said you don't like seeing the old textures over and over again. What's your most hated texture set and how do you create your own?
M: Old textures are fine, if you make something cool out of it, but im pretty sick of all the gothic textures to be honest. I download most of the textures from cgtextures and tweak them a bit in GIMP, or just draw something and spam filters and write some shaders until they look good. The drawn ones are mostly for teles and jump pads so they would look crap just as they are. 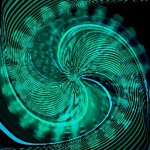 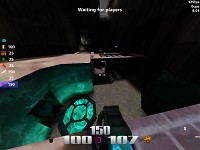 B: Which one of the other competitor's maps/themes/ideas is your favourit so far?
M: Hmm, I have to check them out, can't remember who made what so far. Most of the maps are in alpha stage so far, so it's hard to say at this point.

B: And from the theme descriptions?
M: I look forward to StormShadow's map , looks like a fun map. cityy has made some nice maps before and this one looks really cool at the moment. And phantazm11 is always awesome.

B: Is there anything you want to say to Maverick or the other competitors?
M: Just <3
Thanks for organizing this compo and good luck to all :D
I look forward to see all the maps when they are done, and to follow the progress :)

B: Alright, thank you, Martin, for sharing your thoughts with us and good luck with your map.