Not sure if anyone here's ever heard of it, but there's this little off-the-beaten-path RPG called "Skyrim," apparently the fifth in a long series or something. I saw it on the Steam Summer Sale, thought it looked pretty decent, and decided to give it plus some mods a shot.

To start things out, I'm a formless being with a backside glued to a bench on a wagon, with three other tough-looking guys, on our way to parts unknown. Unknown to me anyway, my prisoner mates, as I soon find out they are, inform me we're all on our way to be executed. Ouch. Grim stuff already.

Or at least it would be grim, if not for the high spirits of my new best friend Rolof! 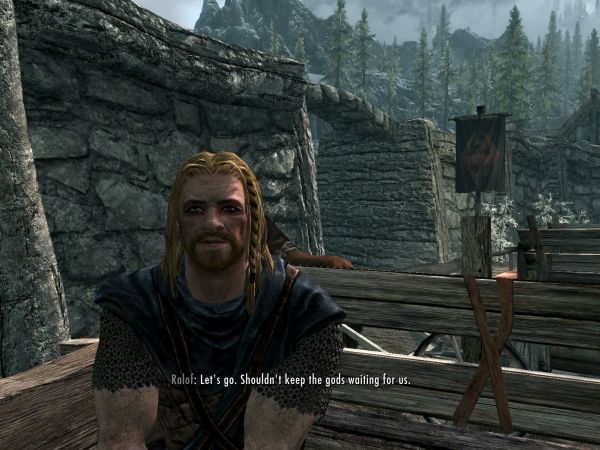 
We reach the end of the line, and Mr. Silent, Mute, and Invisible but-no-longer-deaf(I figured out how to turn my sound back on) Protagonist follows Rolof and co. out of the wagon. Ride's over, time's up, this is shaping up to be a really short game. So, I step up to have my non-existent head removed from my body, when- 
Well, this is awkward... let me just restart.

Now as the fabulously attractive dark-elf Jasper Gleamdust(Absolutely no relation or connection to the Dawnbreaker Jedi of the same name), I find myself with a renewed motivation to keep my beautiful neck in tact. You Imperial bastards can't even name a crime I'm committed! Well, let me tell you, when I'm through with you you'll have a whole BIBLE full of real crimes I've committed against you! Truth be told, I was so pissed at these Imperial bastards that I almost lost it and murderized them all in a rage of elf-ninja-powers. I probably would have, if not for the calming presence of my mate Rolof. 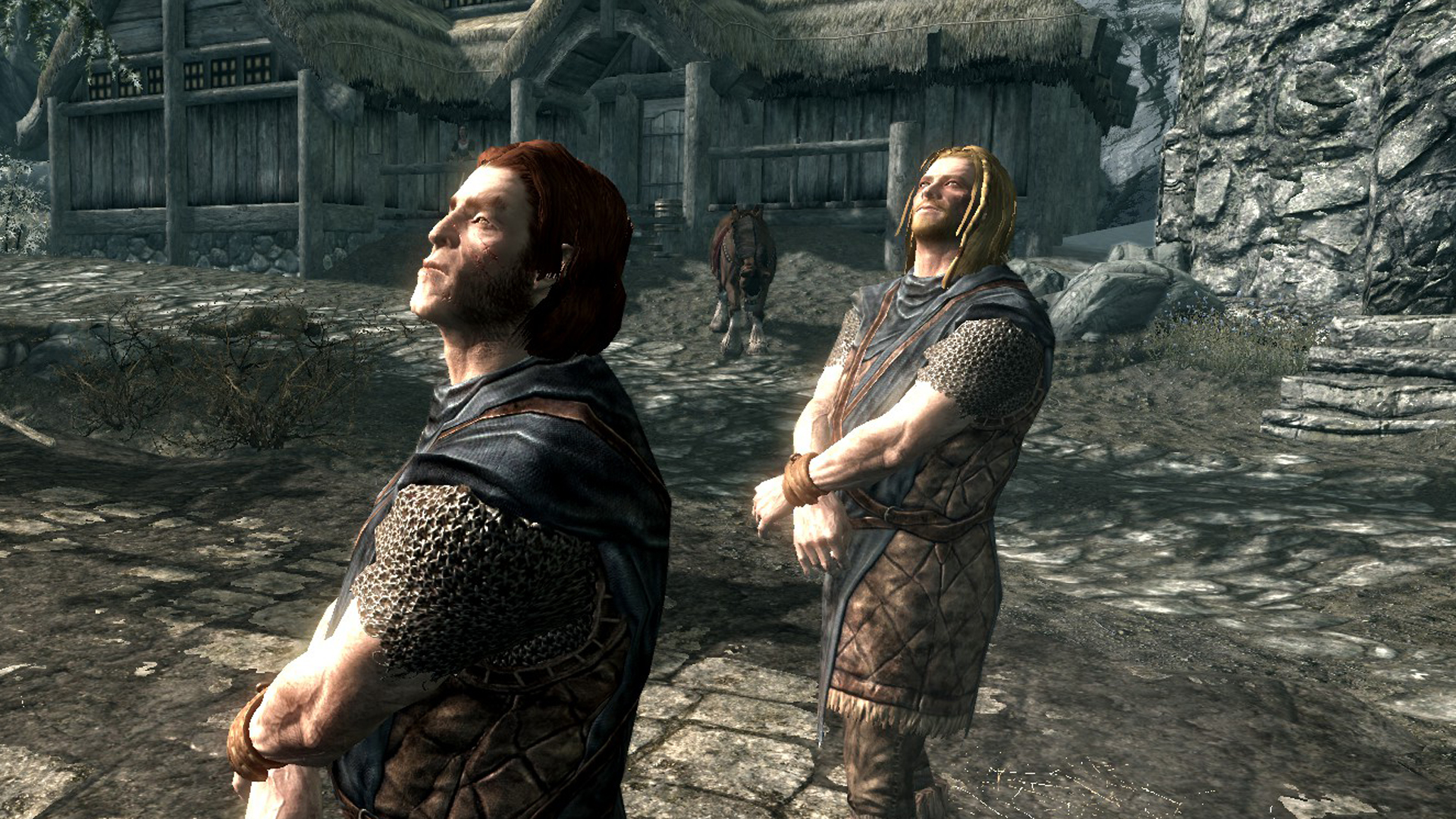 Just look at him, Rolof is so boss that he's still smiling in the face of certain death, and a certain dragon.

Wait, did I say dragon? 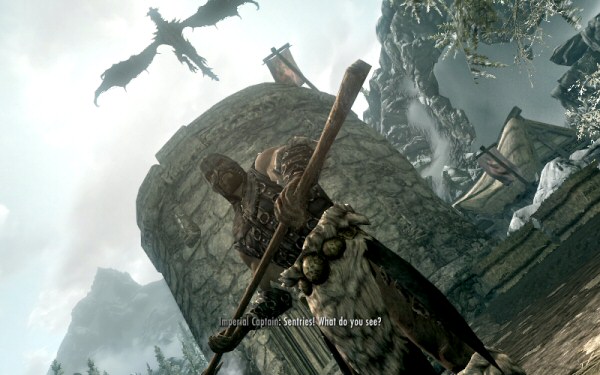 Oh yeah, this game has dragons in it.


So this dragon shows up and starts frying all those Imperial bastards, like a boss. Me and my Stormcloak comrades make a run for it while cackling insanely about how awesome this dragon is. Or at least I was cackling, Rolof, bless his heart, was still doing that cold, silent-type routine.

At some point I somehow end up with one of those Imperial bastards, and I quietly inform him that I will kill him as soon as my hands are unbound, as apparently my teeth just won't cut it. Very quietly as it turns out, since while I may have a fabulous face and a gender-missleading name, I am unfortunately still a dumb mute. It isn't long before good ol' Rolof shows up again, and whisks me away from that Imperial bastard. Then just as a further testament to what a great guy he is, we get inside, he cuts my bonds, then we both proceed to strip some of his dead Stormcloak compatriots naked. It was a bonding experience, really.

A bonding experience that was interrupted, since all Imperial bastards know how to do is ruin a good thing. Clever ploy on their part, but ultimately in vain. We took that intended interruption, turned it around, and smacked it back in their faces, in the form of turning it into another healthy bonding experience. 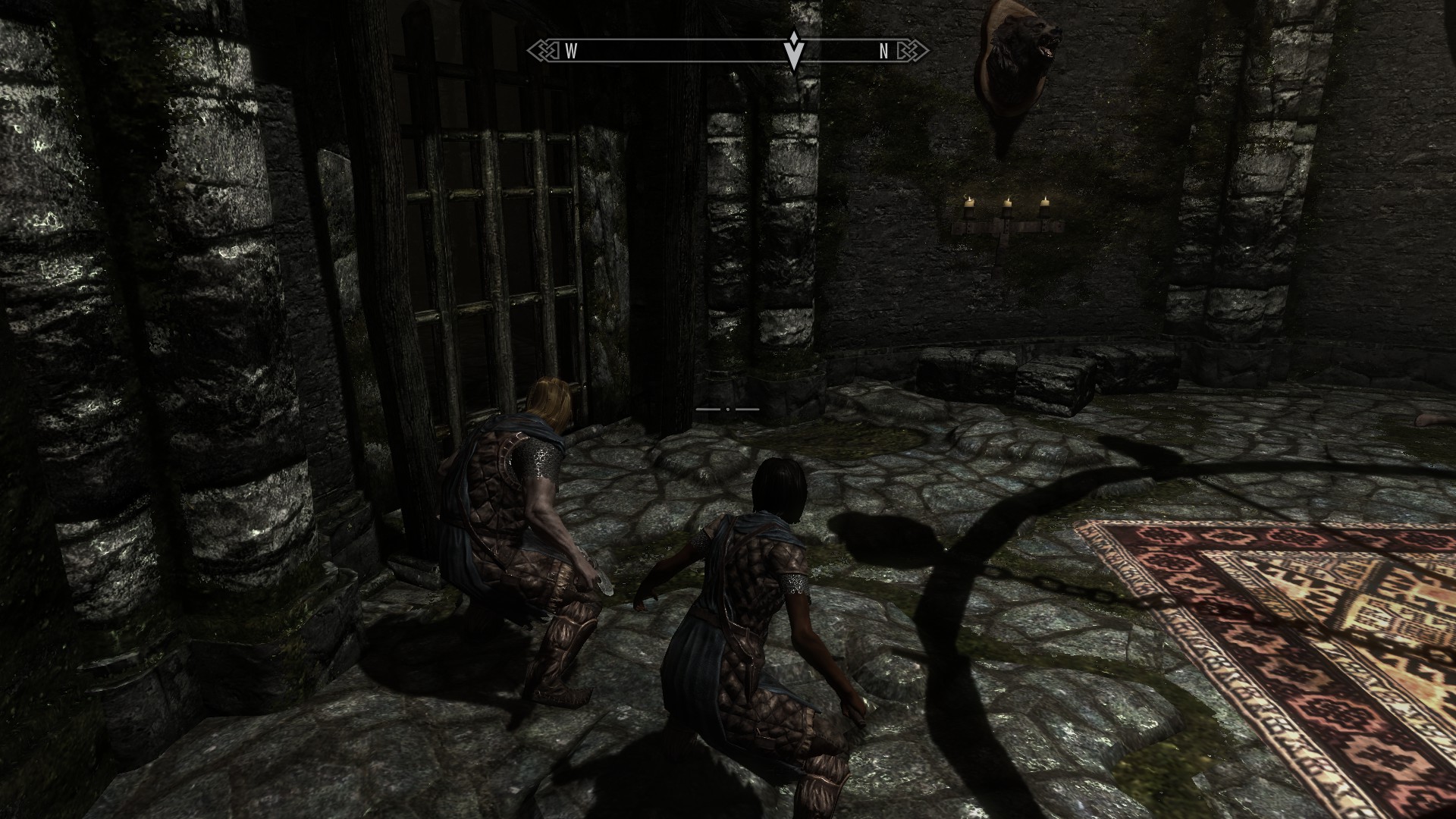 Few bonding experiences are better than preparing an ambush for Imperial bastards. 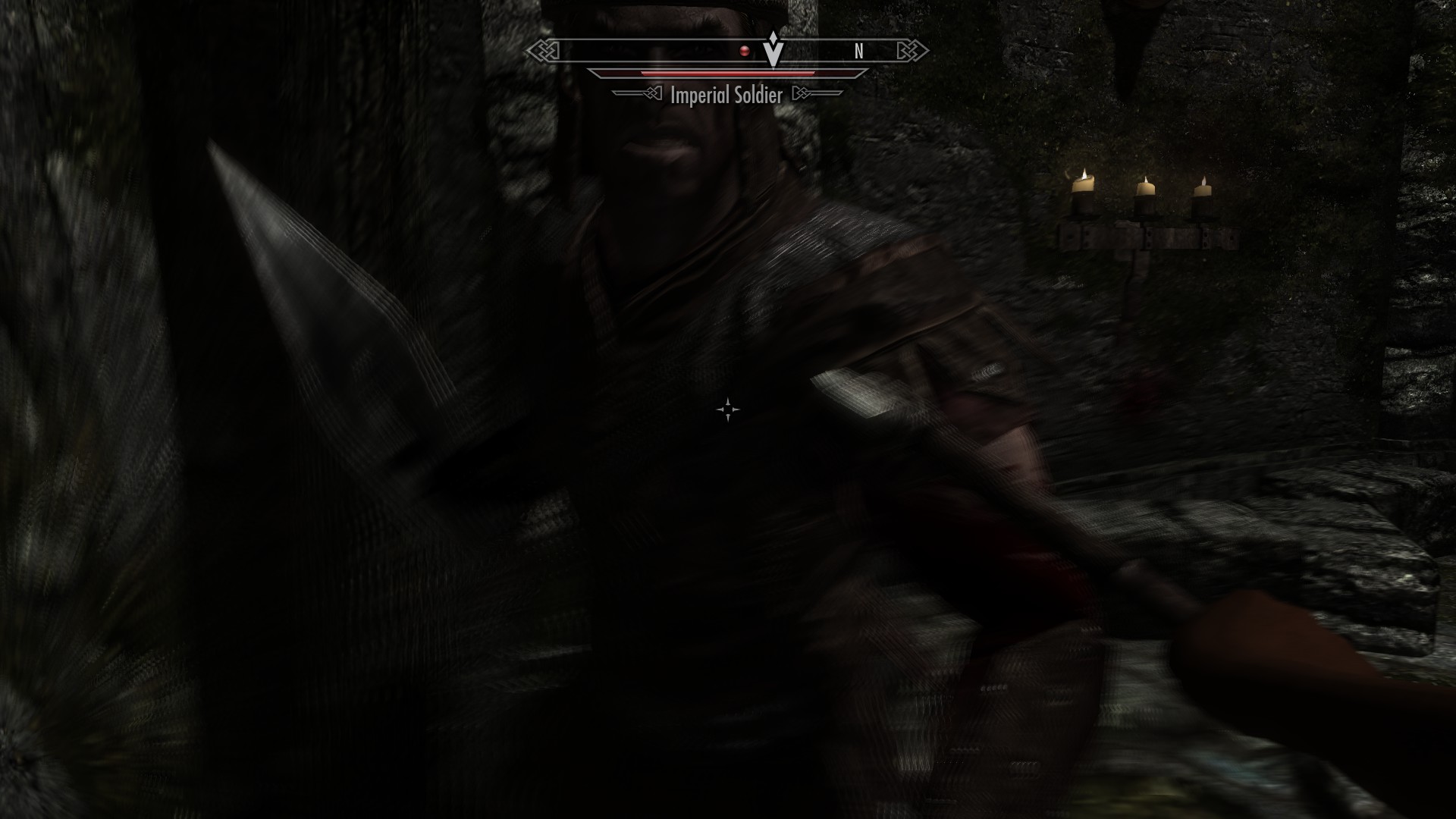 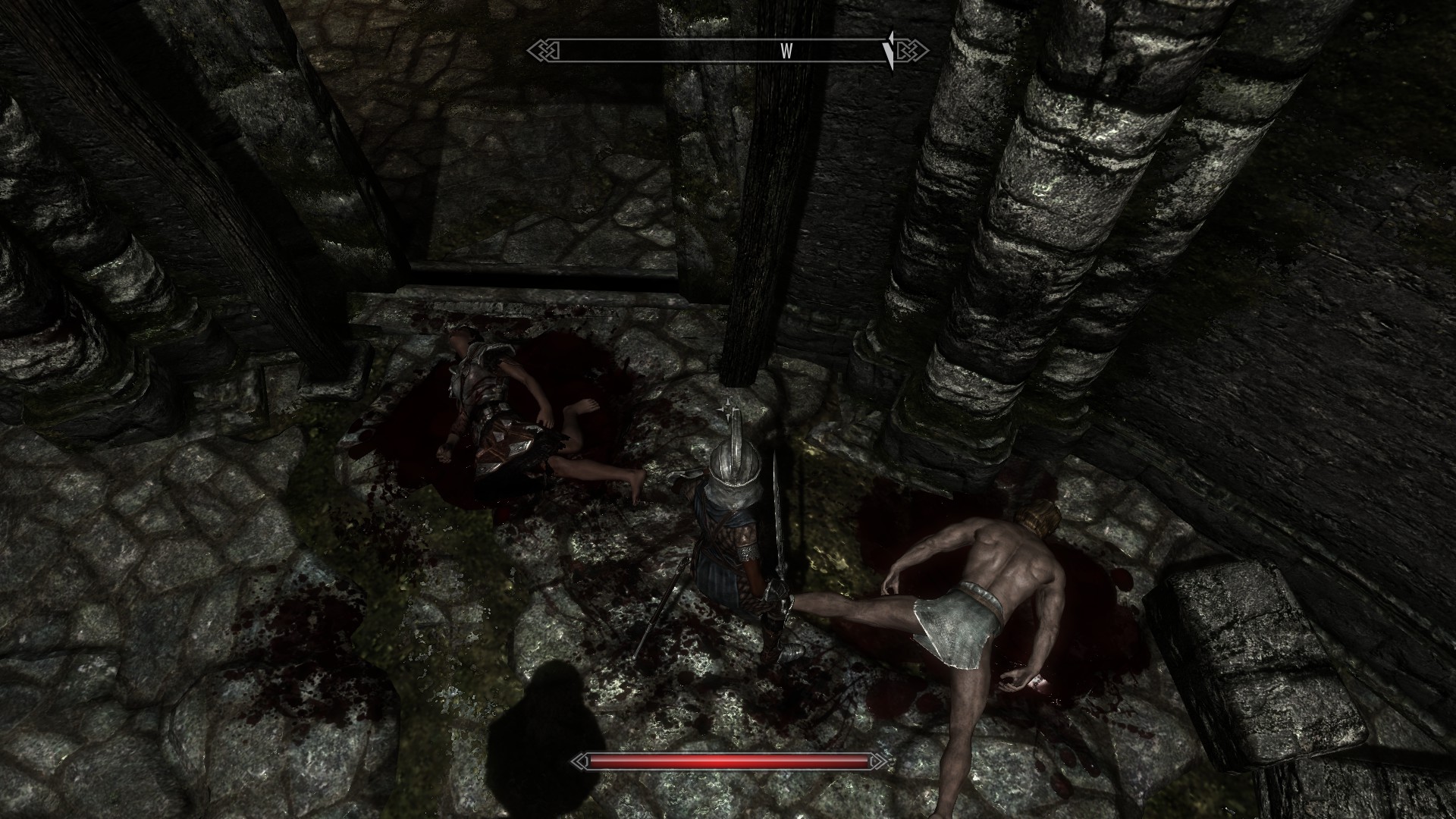 actually I have no idea what I said, it was all sort of a blur of blood and axes, and when it was over, I had my first taste of Imperial Bastard Blood(Henceforth to be known as IBB) on my tongue. It felt good, but the feeling was fleeting at best, as Rolof apparently did not feel the same way. That's what I gathered anyway, as he did not speak to me or move again. 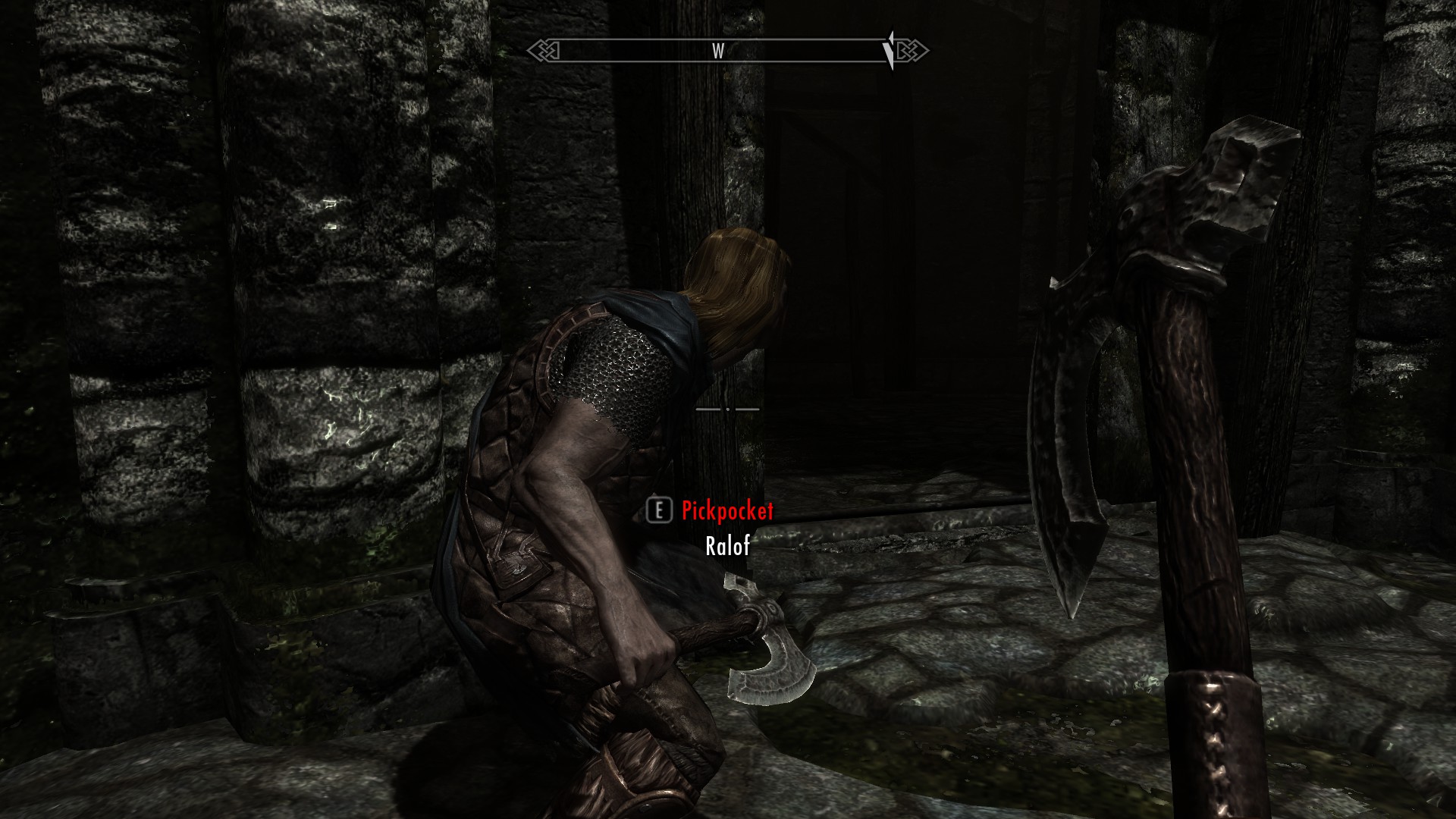 
It made me very sad. Those Imperial bastards probably engineered this glitch. With a heavy heart, I continued onward without Rolof, in the hope that he'd meet me later.

He didn't. I made my way all the way to the exit, yet there was no Rolof in site. While it was delightful taking in the first breath of non-tainted Skyrim, it was hard to enjoy the moment. 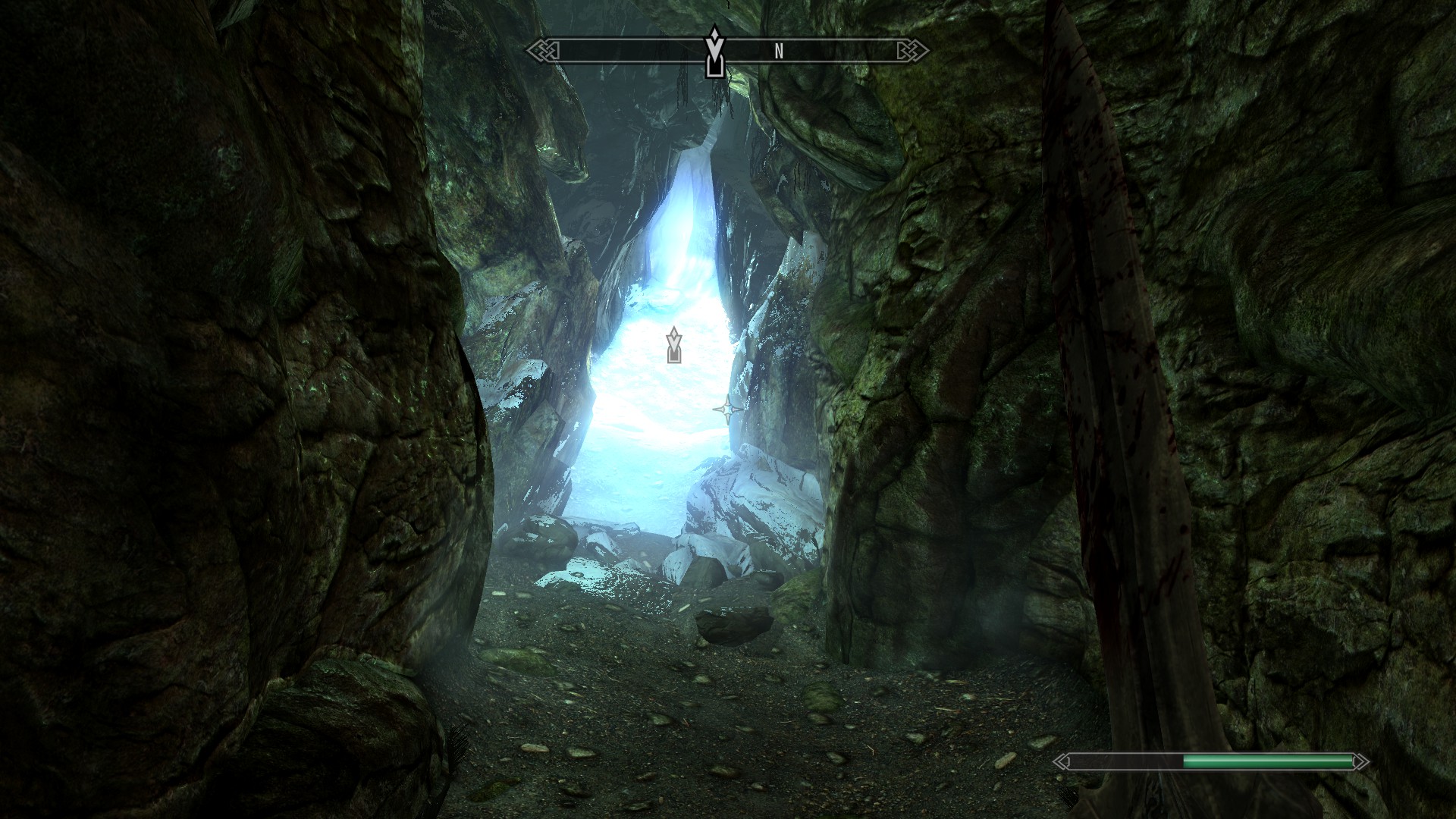 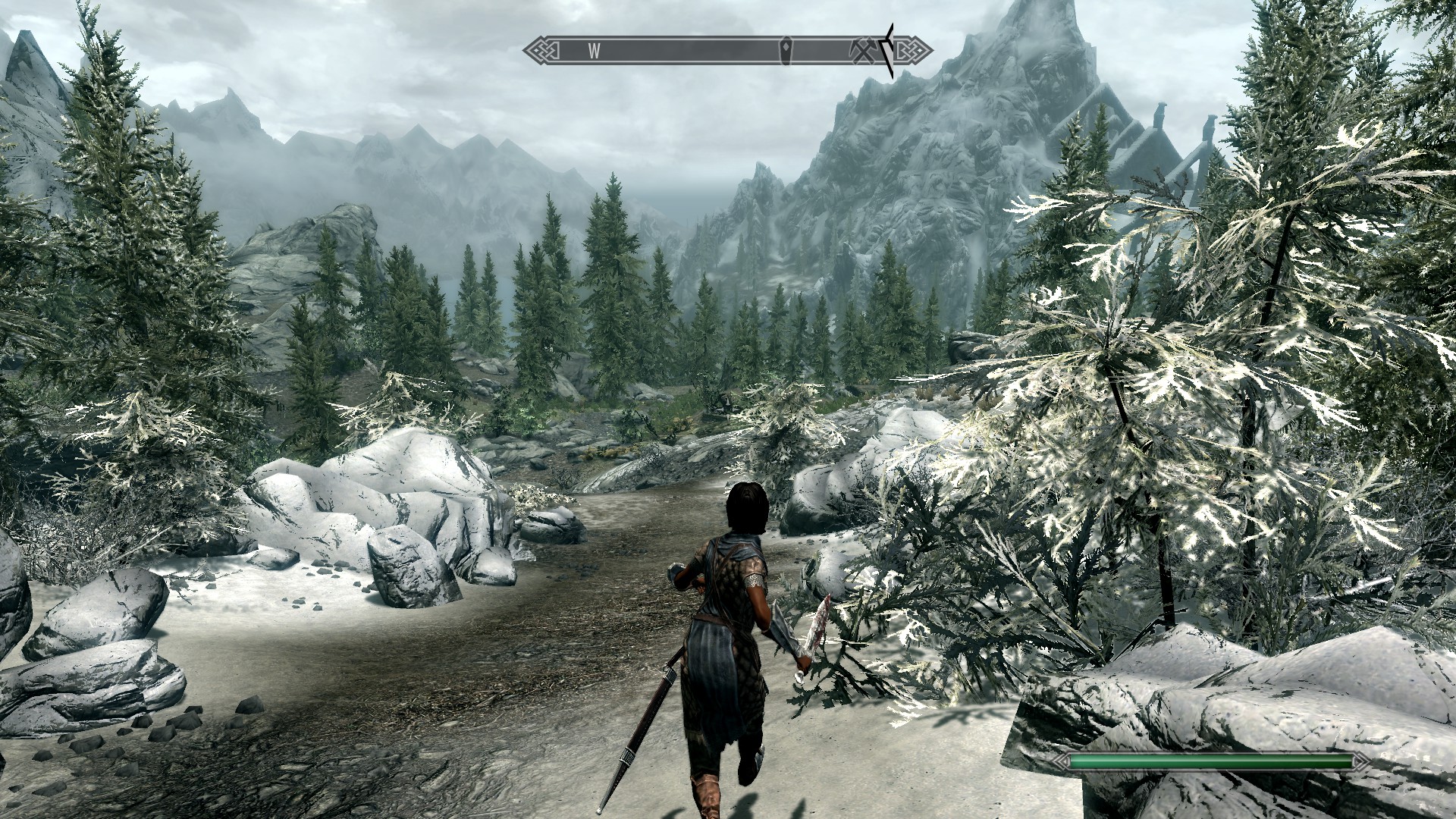 Or at least it WAS hard to enjoy, until I received a quest out of thin air with directions to Rolof's sister's home! Ha! Take that you Imperial bastards, you can glitch out the game but you can't glitch out Rolof!

Once again feeling super-jazzed, a ran all the way to the quest marker and stepped inside... 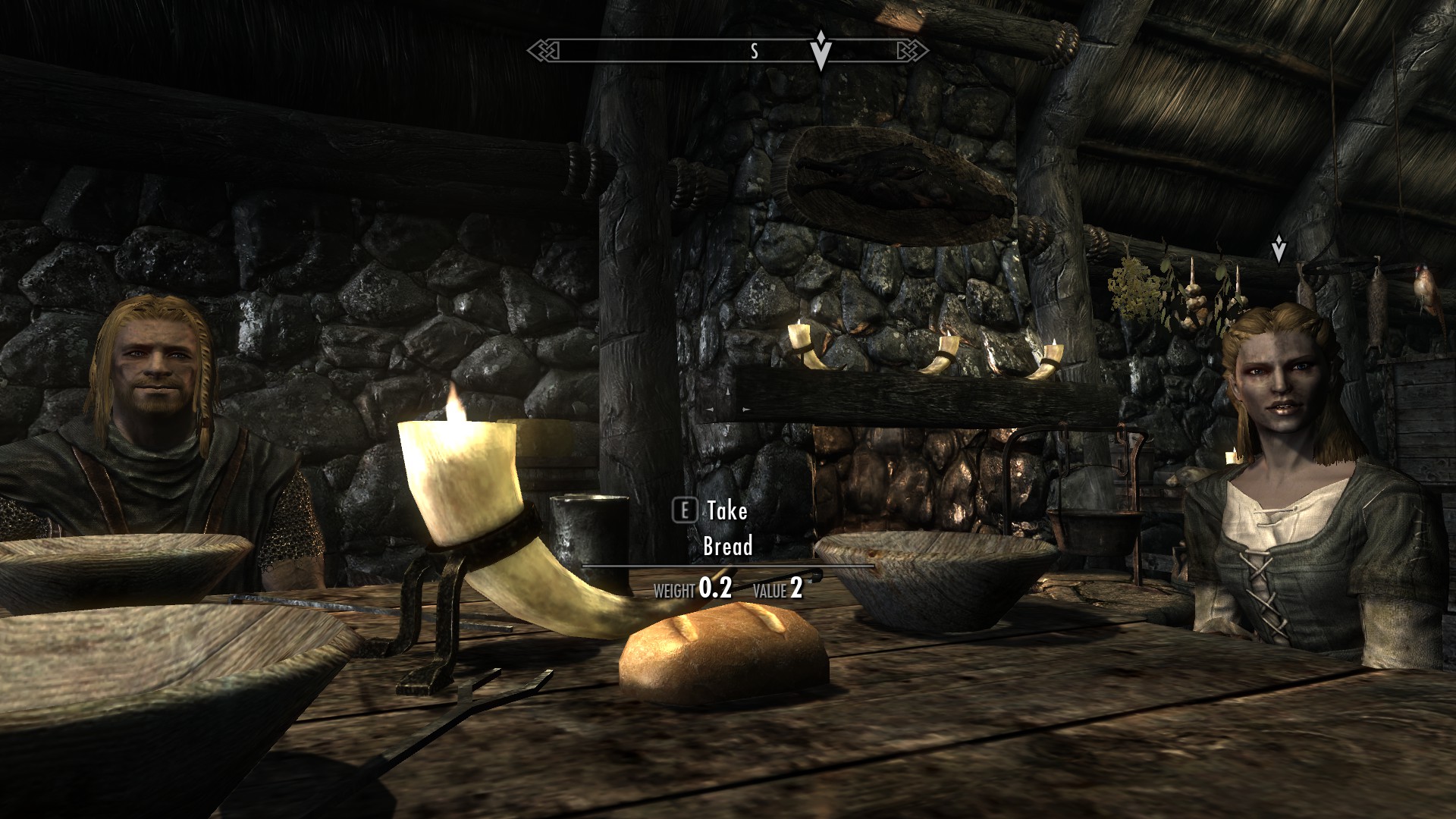 This went on in silence for at least five minutes.


...and right into the most awkward dinner conversation I've ever experienced. Maybe Rolof isn't as cool a guy as I'd thought. So much staring, it was a game of chicken, one Rolof's sister finally lost, when she retreated to her bed. Now, obviously she lost, and of course, as we all know, in civilized societies, when someone loses that means the winner gets all the loser's stuff. So while she was sleeping, I proceeded to take all of her belongings, in and off of dressers, off shelves, out of cupboards... only problem was their house guest sitting in the corner, I mean who the heck is he? I dunno, but he was giving me funny looks and acting all suspicious, so 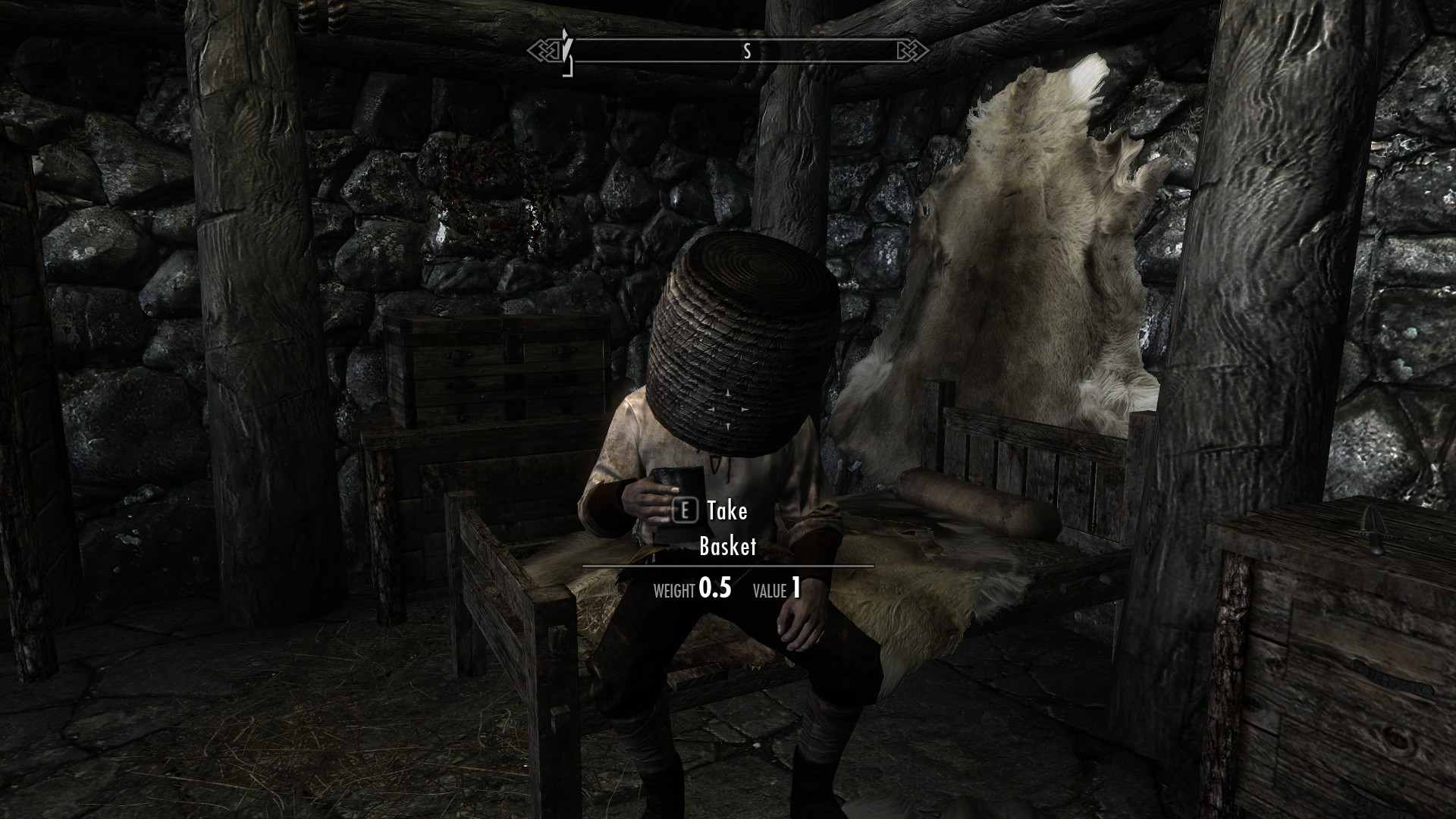 Problem solved. He saw nothing.

After sleeping with Rolof's sister(There was ample room for two, don't give me that look, you perv), and organizing all their food into a basket on the floor, I finally decided to wake up and talk to the sister wench. She gave me directions, I bade Rolof farewell, and away I went to seek my fortune. 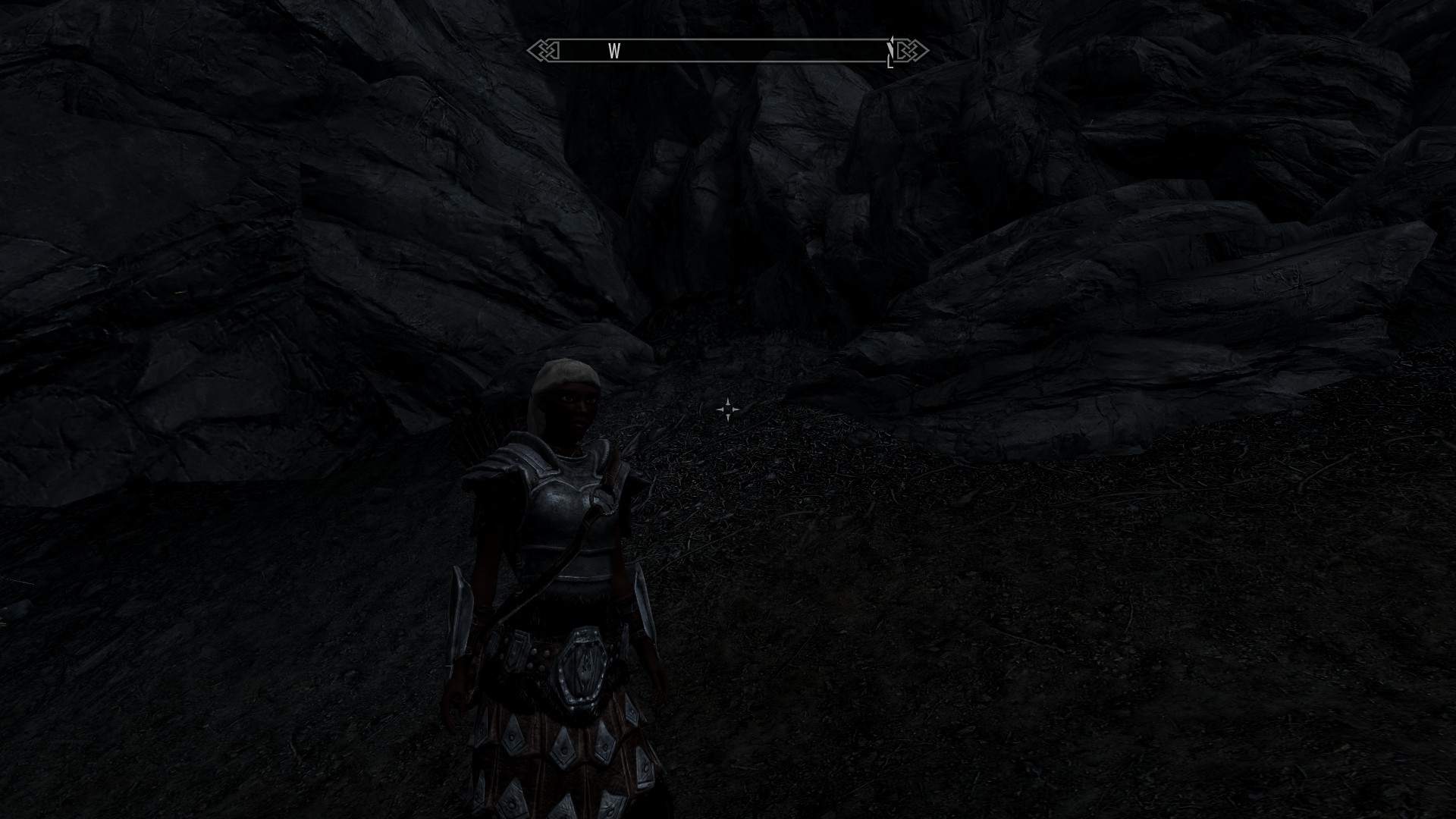 While wearing this fabulous hat Rolof's sister gave to me. Well, she left it on her nightstand anyway, I assume it was there for me.

At the time of writing, Days 2 and 3 have been made and are on my blog, for those of you who liked Day 1. I wasn't sure if I should spam up these groups with all three, so for now this is the only one I'll be uploading.

I'm just making these for fun, so enjoy, or not, hopefully it's good for a laugh at the very least :)

funny i recently started playing Skyrim too. xD what mods are you using anyways?

But the highlights are:

Apart from that, I've just got lots more little cosmetic things, ranging from new fire effects, to minor retextures, high res eyes, super jump, etc etc. I don't have anything that's majorly game changing, I haven't downloaded any new quests, followers, locations, or anything like that yet.

shrooms!
nice overlook of the game too (for those like me who have never played this game)

Thanks man! Your username and comments together under these journals were amazingly fitting XD

Glad you enjoyed it :)