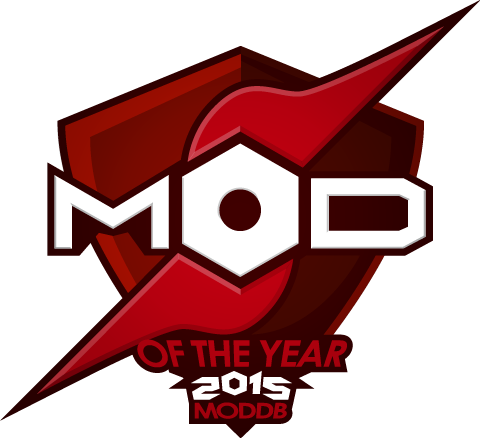 NO PURCHASE NECESSARY. VOID WHERE PROHIBITED BY LAW.

Entrants of all ages are eligible to participate. Contestants who are minors, however, must have a parent/legal guardian submit written authorization. Employees and agents of Mod DB their respective agents, officers, parent companies, affiliates and subsidiaries (collectively "Contest Sponsors"), and members of their immediate families (parents, children, siblings, spouses) and/or persons living in the same households as such persons, whether related or not, are ineligible to enter the Contest and cannot win prizes. This contest is governed by the laws of Australia and of the State of Victoria. This contest is void where prohibited. Contestants are responsible for compliance with applicable laws in jurisdictions where they reside.

All active projects (mods) listed on the Mod DB (collectively "projects") will be automatically enrolled in the competition. Projects which have not made significant development progress in 2015 as determined by the Mod DB cannot win a category or prize, they are only eligible to win a "honorable mention". Projects which are eligible and have won in previous years cannot win in the same category again, unless an exception is given by Mod DB staff on request (eg. your project upgraded from v1 to v2). You can request your project to be excluded at any time by contacting us with the details.

All entries must be the original creations of the entrants, not contain any intellectual property not owned by the entrant and must never have been published or professionally developed unless written authorization from the intellectual property owner is provided at the time of entry submission. Entrants agree to indemnify and hold harmless sponsors from any copyright, trademark or other intellectual property infringement claim or liability with regard to their submissions. All submissions must be in compliance with the applicable game End User License Agreement that comes with each game.

Judging will be based on Mod DB members votes. Any project found falsely accumulating votes via dummy registrations or other means will be instantly disqualified. At the end of the competition the votes will be tallied electronically and the top mods and indie games from each category will be chosen by Mod DB staff. They will decide the ranking of the top mods and indie games in each category. The decisions of the Mod DB Staff will be final and binding on all entrants.

Entrants agree to accept and abide by the rules of this contest and agree that any dispute with regard to the conduct of the contest, rule interpretation, or award of prizes, shall be submitted to Mod DB, whose decisions shall be binding and final. Entries not satisfying the Official Rules will be automatically disqualified.

By participating, entrant agrees to release and hold harmless sponsors and their respective parent companies, affiliates, subsidiaries, service agencies, independent contractors, and the officers, directors, employees, investors, agents, and representatives of any of the above organizations from any injury, loss, or damage to person, including death or property, due in-whole or in-part, directly or indirectly, to the acceptance from or use/misuse of a prize or participation in any promotion-related activity.

Sponsors are not responsible for any typographical or other error in the printing of this offer, in the administration of the contest, or in the announcement of prizes. In the event that sponsors are prevented from continuing with the promotion, or the integrity and/or feasibility of the promotion is severely undermined by any event beyond sponsors' control, including but not limited to fire; flood; epidemic; earthquake; explosion; labor dispute; strike; act of God; public enemy act; satellite or equipment failure; riot or civil disturbance; war (declared or undeclared); terrorist threat or activity; any federal, state, or local governmental law, order, or regulation; order of any court or jurisdiction; or other cause not reasonably within sponsors' control (each a "Force Majeure" event), sponsors will have the right, in their sole discretion, to abbreviate, modify, suspend, cancel, or terminate the promotion without further obligation.

If sponsors, in their sole discretion, elect to abbreviate the promotion as a result of a Force Majeure event, sponsors reserve the right, but not the obligation, to award the prize from among all eligible entries received up to the date of such Force Majeure event. The administrator of the contest is Mod DB.

An entrant's submission of entry constitutes permission for Mod DB and, in Mod DB's sole discretion, such other Contest Sponsors to use entrant's name, photograph, likeness and other material provided in the entry for any business purpose, including for promotional purposes in any media. Contest sponsors have the following rights with respect to contest entries:

Mod DB will not knowingly provide any personally identifying information that is not already publicly available of minors to any third party without the written consent of entrant's parent/legal guardian.

All rules, regulations and categories for this contest are subject to change without prior notice. This Contest shall be governed as to all matters, including validity, construction and performance of the Contest General Rules, by and under the Laws of the Australia and the State of Victoria and the sole venue for resolving all questions related the rights of the Entrants and winners in this Contest shall be the courts located in Melbourne, Victoria, Australia.

Winners will be notified through their profile email and winning projects will be highlighted on the official Mod Awards website.

All costs, taxes, fees and expenses associated with entry into this contest and any prizes received shall be the sole responsibility of the entrants and winners.

The Top 5 Players Choice winners as determined by Mod DB staff, players votes and the rules here (to be clear, only winners which contain IP entirely of their own creation are eligible for this prize), will be contacted by 5th January 2016 and given the opportunity to participate in an advertising campaign. Provided the winners respond within 5 business days and approve the design of the advertisement featuring their entry, they will be included in this prize. In total 1,000,000 advertising impressions will be shared by the winners of the 2015 Mod of the Year and the winners of the 2015 Indie of the Year. These impressions will be run according to:

The advertising campaign will begin on the 11th January 2016 and will conclude once all impressions have been served. It will link to the awards page on Mod DB which showcases the winners. In additional to this, the winning teams are eligible to extend the advertising campaign at a 50% discount, by contacting Gamer Network.