Wartile is a medieval fantasy themed strategy game that invites the player to select a band of miniature figurines and embark on a campaign or a multiplayer match, set on gorgeous diorama Battle Boards. Figurines, their special abilities and your hand of godly and tactical cards are the tools to rule the board. Wartile captures the tabletop feeling, while adding its own digital style, magic and humor. Tactics weigh heavily in Wartile, where a unique cooldown system adds the flavor of turn based games and gives you the time to outsmart, trap or even use Godly powers on your enemy.

Major Update to Wartile with 15% Discount

Major Update to Wartile with a 15% discount

‘Thor’s Wrath’ is an exciting new mission variant with new challenges where players embark on the search for ancient relics connected to Viking Mythology in a revisit to the Heidrun Clan. Trail of Tyr now takes the available number of playable Battle boards in Wartile to 8, with more coming in forthcoming updates. 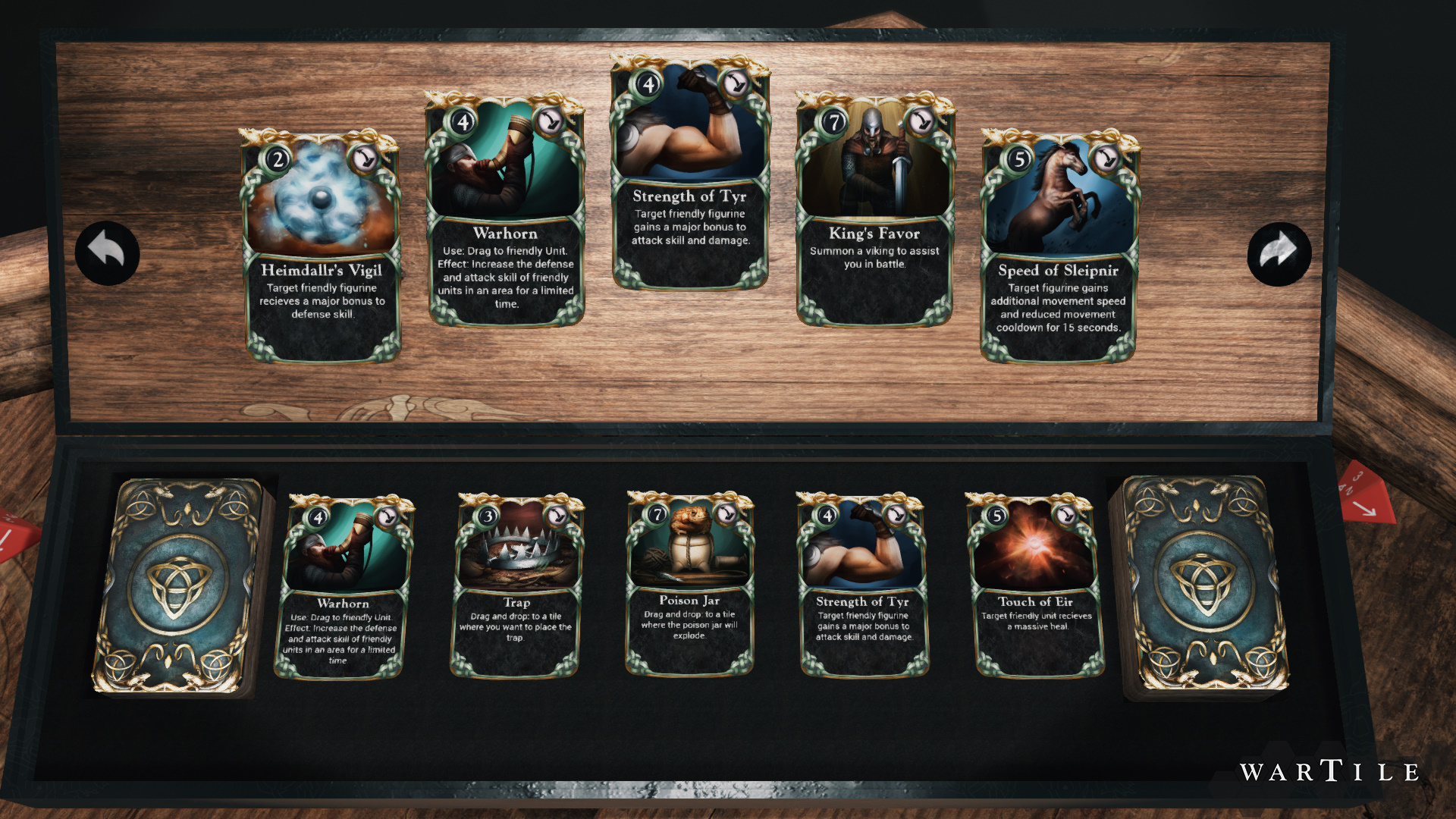 Other updates and tweaks include brand new art for Ability and Godly cards, which have been revamped with new art and colored markings so players can distinguish them more clearly.

Poisonous toad dust bombs have also been added to the player’s arsenal of deadly assets and, for those keen to get up close and personal, the Viking headbutt will allow players to stun opponents during an attack.

Oil Bombs now provide a short based range attack to engage in full on Viking arson, and no Viking rampage would be complete without the healing benefits of alcohol - flasks of medieval Mead can now be consumed by your Viking to provide a small recovery to health.

Apart from these key features, lots of other features / content have been added or improved and. Visit our News section to get the full overview.

Learn more about Wartile from the Steam Store.

Wartile can also be purchased from the Humble Store

WARTILE a new breed of real time strategy. Embark on a Viking conquest leading your band of figurines to battle on small miniature landscapes.

We are thrilled to finally be able to release the Adventure Pack 0.7 that brings two new Battle Boards, a fully enhanced Campaign menu and a few new Battle...

We are working on a better and more beautiful campaign menu, a more accessible merchant. Two new literary cool battle boards and a reward overhaul. Read...

Another Major Update to Wartile with a 15% discount

The Adventure Pack 0.6 for Wartile have just arrived with a 15% promotional discount.

Wartile is a medieval fantasy themed strategy game that invites the player to select a band of miniature figurines and embark on a campaign or a multiplayer...

Everything about this looks great!

Great game! Would you like FREE MARKETING to our 13k+ Twitter followers at @ProjectMQ? Our posts get an average of 15 engagements (likes/retweets) each. Honestly, no strings attached. Check us out on Twitter, we're the real deal. DM us for more info.

Just wondering, how graphic will the fighting be, or will there be an option to tone the violence up/down?

Its figurines fighting, so they don't bleed. And dying is pretty graphical I think, especially if you are a figurine.

As you can see here.

Game looks great:D ! Will this be free by any chance?

It's going to be premium title for PC to begin with..