WAR Space is an online multiplayer space combat simulator. You will test your skills as a space ship pilot (captain) in team vs. team battles. Learn your advantages and use them against your enemy, seek your enemy's weaknesses and strike at them to win. Build your ship, gather a team of friends or just hop in any vacant place and take part in space combat you never experienced before. In release version there will be available multiple classes, which not only different in size and fire power, but also in tactical capabilities. Nvidia PhysX engine provides true Newton laws physics along with Unity 4 DX11 graphics creates an atmosphere and gameplay you will never forget.

Take a look at WARSpace spaceship building process. Shipyard is available for download at www.warspaceonline.com..

Shipbuilding is one of the key features of this game. Ship capabilities depend directly on a ship design. Adding more parts doesn't always make a ship better. Just a bigger gun or a thicker hull armor won't bring a victory in a battle.
All parts are connected by joints. Joints can only be placed at specific places called connection nods. Connection nods represent not only the place where the parts can be connected but also a type of a joint used. 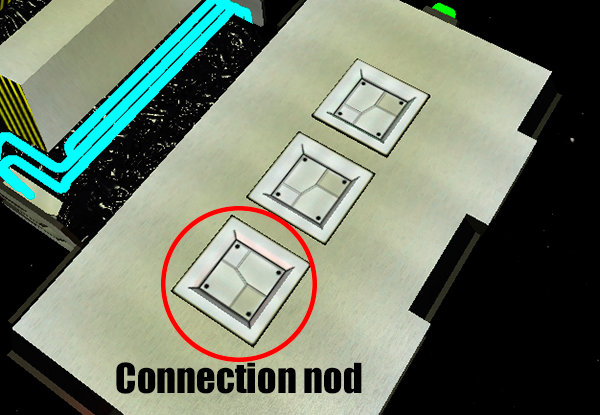 This building system allows a player to build a ship with a high level of symmetry which affects positively ship maneuvering capabilities. It also simplifies a building process by dropping out precise part positioning. For example, using keyboard shortkeys and a mouse a player is able to add about thirty thrusters to a ship in less than a minute.
Since this game uses real time Newton laws physics, keeping center of mass close to geometrical center of a ship is very important. A non symmetrical ship causes a need for contr maneuvering while performing a maneuver. Although it is done automatically, a ship wastes power and fuel which can be limited at a time.
Another important part of a building process is power management. A player always needs to check on power consumption and production levels. It's impossible to maneuver, fire and charge a shield at the same time. Adding more power generators makes a ship heavier and more vulnerable. Power generators have a very small amount of hit points, thus can be destroyed easily.
Thrusters give speed in exchange for fuel. Since it's impossible to cover thrusters with armor, the only level of protection that is left is shields. Unfortunately, shields don't last long under heavy fire. Thrusters are the only parts which are used in a great number. Adding a lot of thrusters keeps a player from losing a battle if a couple of them got destroyed. 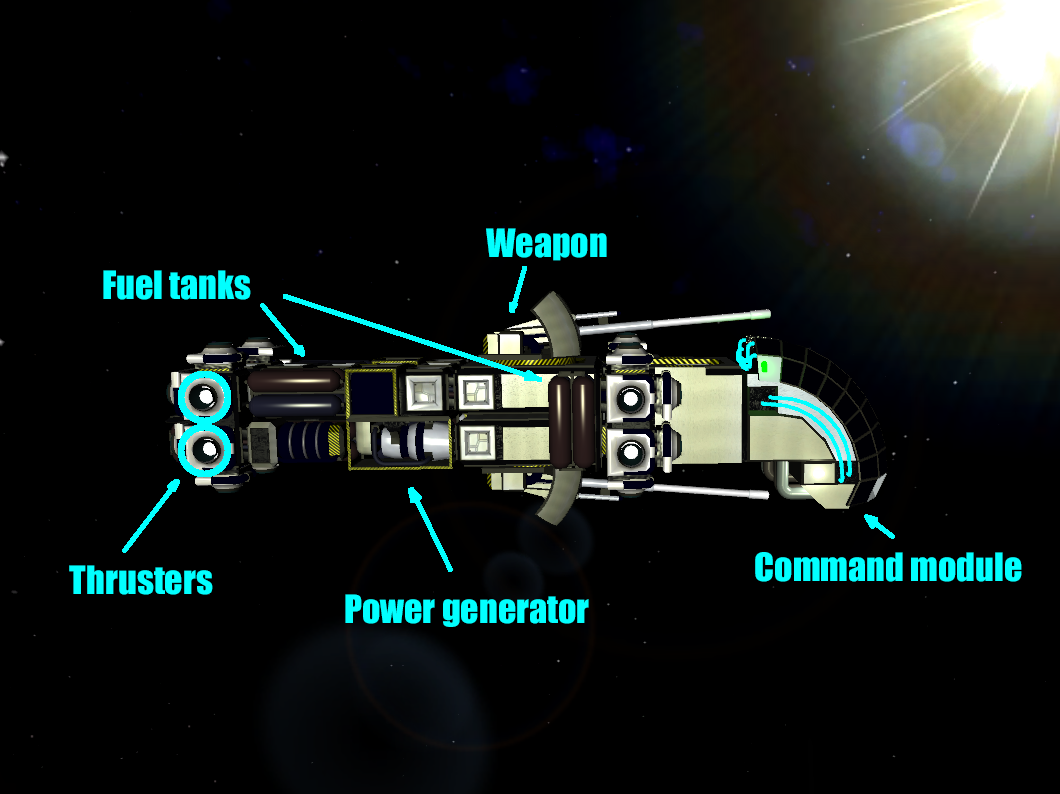 It doesn't mean that a player has to spend hours to build a ship. It only means that there is no limit for perfection.

I also hope, it doesn't have sounds in space. It should only (in worst case) have laser impact sounds on ship hull and maybe higher calliber (or higher energy), somewhat silenced / distant sounds of gun fire from your ship. And these sounds, they should sound properly / realistically because they get dispersed / silenced / changed by ship itself, they depend on their location and material they go (vibrate) through and there is no exterior gas to make them dispersing to and back from exterior like here on Eearth - yes i realize, it would take away some fun part for certain type of people but this game is more about realism than fun, right?

Don't thank me for this idea, you're still probably not gonna implement it lol but i must say, very pleased to see such game because i'm a huge fan of simulation / realistic games, space and physics, also, combat so this is real candy for me.

I have plenty of ideas for this game already and i'll surely come up with even more so if you want to know them, just hit me up. Sorry for messed up text, i didn't bother to keep any form of writing this time.

Finally - the real space combat / ship building simulator. Eve Online is a joke, not a simulator and CCP should be ashamed.

By the way, i hope ships in this game don't have speed restrictions? Even if they do, it's far more realistic than Eve Online LOL

I can't figure out the controls in the shipyard - I can't seem to place any pieces. What do I need to do to attach the pieces I'm selecting and seeing in the box on the lower right?

I see - thank you! I didn't know you had to select a node on the ship AND on the part. This should work great now.

This looks great! Will be following closely. The only other game I know of with this kind of detailed simulation is ScrumbleShip, and it looks like both games will bring something unique and interesting to the table. Can't wait to try this.

This game looks pretty cool, will it cost money or anything? If so, I suggest putting it on Steam Greenlight when you feel it's ready so then you can have people buy it from there, I prefer buying from Steam... But anyways, will there be a first person view from inside the cockpit? If so, I think it would be cool to have radar inside the cockpit and different terminals for things like shield power, hull damage etc. etc. I also suggest to make the collision a little different, instead of the ship just flying apart, make only certain things fall off when hit, so you can knock the turrets off by accident and stuff (if this is planned ignore that). Another thing, will this have players? Like, actual characters that you customize and use to walk around and stuff? Because that would be cool to have a character and if there is a fire on your ship you can turn on an auto pilot type thing to evade ships while you put out the fire... These are just suggestions and don't have to be implemented but if I don't say them, I go insane... So basically I just have to get this out...

As for collisions, it's all depends on impact force and direction. You can knock off only one part or a half of the ship. First person would not be in the release maybe it would be added later. There will be nice GUI with radars, multiple windows for various systems controls etc. Right now I am focused on basic stuff like shipyard, flight assistant, weapons, etc.

Okay, well this game looks awesome! But will this cost money or will it be free?

It's too early to talk about the distribution model. For multiplayer I was thinking Free To Play model and for singleplayer regular buy to play. But all of this may be changed.

Okay, seems cool, I am Revan from Steam so my questions and suggestions are going there now, no need to check for what I say on here.

Oops, I didn't see it was already on Greenlight... My bad...