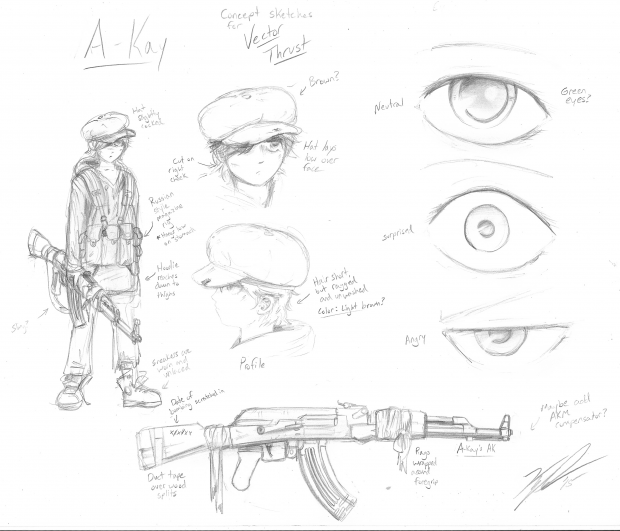 A little bit surprising how the AK-47 is such a rare machine in this world. The reason it was so mass-produced was because of how simple, reliable, and effective it was, and also how inexpensive it was to field. Feh, I'm not complainin', it's just kinda strange to me. Feels like the equivalent of making the Bf 109 a one-of-a-kind.

She's just a child; a war orphan in a kingdom long past its prime. Not a merc. Just a survivor trying to do simply just that: survive in a world that damned her.

Children of war have, not out of intentional design of course, emerged as important characters in Vector Thrust's grand tale. A-Kay is one. The other, well, she's quite contrasted in comparison.

Oh, right. Much more original than a mercenary in my opinion, though it really did seem like she was a merc.. whatever.

Good to see the infantry (broadly used) getting some attention regardless. Always been ignored in other worlds.

"The irradiated state of the Kingdom has made operations here a nightmare. Infantry have to deal with radiation that could kill them in a few hours, so every soldier of the successor states wears bulky, awkward CBRN gear. Armored warfare is the most common method of taking and holding territory, but in today’s Kingdom the tactical fighter jet reigns supreme. Not only can they freely traverse the terrain, past a certain altitude, but a large number of them survived the nuclear exchange by being scrambled in the first few minutes of the Civil War."

you guys really thought this through.

We spend a lot of time thinking about the world we could be building when we're waiting on bug fixes.

AK. The name of a very rare type of rifle in this Battle Weary World. Seen it kicked around only once or twice in wars where The Kingdom was concerned. Perhaps not the most beautiful, graceful rifle, but it's a rifle only a Poltavian engineer in The Kingdom could invent. Never broke. Never argued. Never complained. It's a rifle that'll get the job done, though anyone outside The Kingdom will tell you it's a rifle from a by gone age: of stamped metal and clunkiness that the current standing major world powers would not look into, especially with their standard caseless ammunition firing rifles, bullpup guns, and OICWs. That is what AK means then: outdated, forgotten, but it still works.

Unless, of course, you're talking about this one girl, this child, who came from nowhere and holds a secret greater than any mercenary dares to uncover, etched into the otherside of that titular rifle of hers.

Her mystery will unfold as the world does. Perhaps not in Hollow Thunder, but in the wars that will soon make this Battle Weary World fight like it never had. Credit to Kyle Dunn