A scientific has discovered an unusual binary system of two dead stars, a black hole and a white dwarf. The discoverer named to the black hole DNS-1 and to the white dwarf DNS-2. DNS-1 has the strange property of move, appear and disappear to the observer's will. The scientific decides to play a while with DNS-1 and DNS-2 instead to publish the discovery.

When I designed Universal Law was thinking about stars, black holes, neutron stars... Well, sincerely I thought an abstract style at first with neon and so on, but later I gave a 'real' style to the game with the gravity as a way that have the player to control the ball (white dwarf). 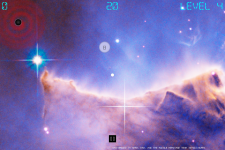 Ok, the stars born and die, black holes appears and disappears, but what now? I had planned add more games modes aside the main 'arcade' mode but trying to simulate the behavior of stars, blackholes and so on I feel it that somewhat limited, so I've relaxed that. I don't pretend make a simulation of the universe. 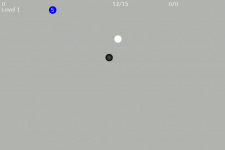 There are now a gravitational well, a ball, and orbs. And I've a introduced a new game mechanic: the 'laws'; The game will have two parts, a 'main mode' and 'law mode' (even the 'main mode' is a law by itself). During the main mode the player will get orbs to earn time for the next phase, a law. A law, goal, can being resolve a mathematical operation, or touch a orb with a value or whatever. If you succeeded the law the time for main mode will decrease and you will earn a lot of points, in return if you fail the time increase for the main mode and you will earn less points.

If all the laws are solved then level is increased and a new level will be introduced among the last ones. 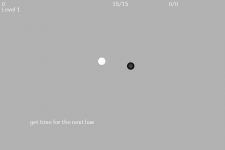 Also I've changed a few things related with the mechanics. The first one is the universe is now boundless. With this, for example, if the ball is out of screen at right will appear at the left of screen. Plus, the game is over only whether the main mode time exceed certain amount or the ball falls into the gravitational well (or blackhole).

A feature I have planned is add animated backgrounds. The previous versions of the game had a static background and was a bit boring.

With all this I hope do a better game.

Universal Law finally is out

Finally is out! Have been a while. I hope people will like it.

Game finally is released for AndroidTab

The second alpha finally is released for AndroidTab

Now the universe is infinite, in theory. Now you can move yourself freely to everywhere! Now the objects are solid. This universe can be very quirky.

Rebuild of Universal Law. Testing a new game mechanic with objectives or 'laws'.

Finally I've got a stable release for desktop. Please, give it a try =)

The second alpha is out! There are a lot of improvements.

First alpha of the game. Tested on Java 1.6 and Java 1.7 Control: Mouse

Ok, for two weeks I'm going to make a rebuild of this game. I was making the game too complex so I will keep things simple.

My next step is try to release it on Desura! ... the desktop version of the game, of course.

Well, finally is out for free for Android devices =)

Ok, a week to the official release. There is a lot of work.

I don't like promise things but I'm publishing an apk file on google play. I would like promote the game with the desktop and android versions published and all in order.

Space... I'm a metalhead but I like ambiental, new age and that stuff. Carl Sagan's Cosmos has the the fault =).

I'm the one who have the application for Android. I need some rest.