In the seventh installment of the Ultima series you — the Avatar — must go back to Britannia and investigate a series of strange events. Two hundred years have passed since your last visit and much has changed since then. An unknown being who calls himself the Guardian has appeared and is forcing everyone to bow to his whims. In addition magic doesn't work as it should, it seems that all of the mages have gone insane, and quiet towns are being terrorized with ritualized murders. It is unclear what is happening, but initial signs point to some kind of organization called the Fellowship. It is up to you to unravel the mystery and find out what is really going on in Britannia. Ultima 7 is arguably one the best in the series. With enhanced graphics, sound, and controls it was a huge step forward not only for the series, but for the entire RPG genre. The level of immersion was astonishing at the time. Rich environments, wide-ranging dialog trees, and dynamic combat were all masterfully com 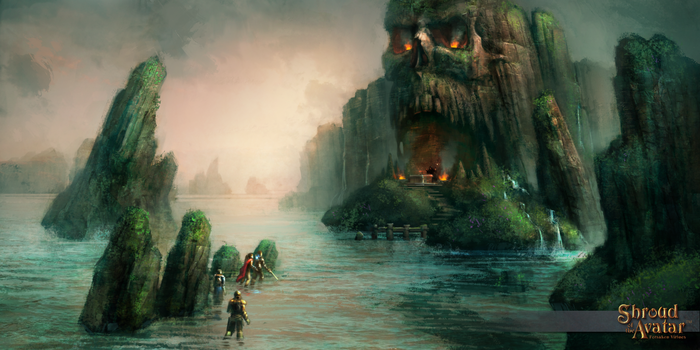 Richard Garriott on Shroud of the Avatar: Forsaken Virtues

-Snippets-
"It plays like Ad Hoc multiplayer, you play singleplayer and any friend can join you in real time while your playing. I'm resolved to build whole new world, frankly I did that one for 20 years into Ultima. it's a good excuse for a fresh start. "

"Whether its Lord of the Rings or Star Wars, it has to say something about the human condition, something that speaks to you. Contemporary. The role I want you to play as... is you. "

"You don't get multiple characters that you can switch back and forth with, this is you, your always responsible for your decisions. "

"You don't need multiple characters or a classing structure. Today you'd like to explore about being a fighter then more power to you, if you'd like to learn more about magic, more power to you! You never have to really restart, you can evolve your character as you see fit. But that way its always you, that way I can have the game judge you based off your actions. Not the alter ego your embodying today. "

"A third of the team is people that have worked with in past Ultima games in the past, a third are people I've head hunted away from games & teams I admire from teams in nearby field often not RP, and a third are green horns, some of which haven't even played Ultima. Giving an interesting blend of ideas. People who wanna do something fresh and people who think they know how its done."

Richard Garriott, the award winning designer and creator of the Ultima franchise, makes his triumphant return to the genre that earned him a place in the Hall of Fame and a Lifetime Achievement Award. Shroud of the Avatar is the first installment of Richard’s new vision and represents the reinvention of the classic, fantasy role-playing which he pioneered. A fantasy role-playing game that will focus more on player choices and discovery than on level grinding.

All the images for this game entry are incorrect. They are images from Ultima VI, not Ultima VII.