You will have to defend against waves of incoming alien creeps by building defence towers, recruit units and heroes, get ready for a super thrilling experience, each levels is specially designed to make you rethink the defense strategy and use different units, towers, and heroes to beat the alien creeps, TD is all about strategy, You will be challenged to reconsider your tactics and use different towers and heroes to complete the mission. Each mission has three levels of difficulty and two special modes with player handicap. 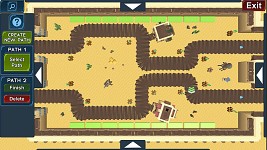 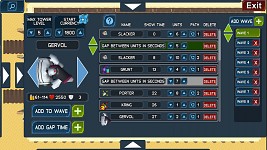 Towers:
Building and upgrading towers to attack enemies – each tower with its own unique advantages and upgrades – will enable you to overpower the waves of enemies.
The following towers are available:
Tesla Tower - electrify your enemies with bouncing electricity that can hit up to 4 grunts at a time.
Plasma Turret - fast firing plasma bullets with freeze and chill chance that wave a devastating damage on its target.
Rocket Cannon - AOE, launch rockets that explode and inflict damage too all enemies with in radius range.
Solders Station - Spawn Soliders that you can control and move around to stop incoming waves while you towers rapidly inflict damage to them.

Heroes:
There are a total of four heroes to unlock, each with its own unique skills which will aid you in different circumstances. At each mission you can use up to two heroes. Different heroes are superior at different missions – select the right ones or you will face staggering defeat.
Willy - fast speed and high damage, he can place mines to stop the alien swarm.
Kristy - armed with her rocket launcher, she is able to inflict substantial AOE damage and has a special freeze missile.
Thunder - equipped with a sniper rifle and a jetpack, he has a deadly long-range attack.
Dave - high health and armor can be used as tank combined with a lethal shotgun and a grenade-launcher to block enemies. 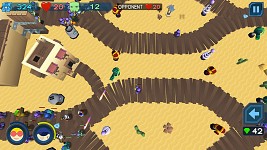 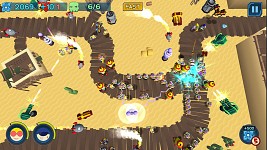 Enemies:
The aliens won't show you any mercy so you better watch out! There are 15 unique enemies with different traits which will make you reconsider your tactics at each level. The awesome stuff they can do includes teleporting, speed-boosting, sniping, freezing and destroying towers, tank and take significant damage and more.

ONLINE MULTIPLAYER PVP
The game has a real-time multiplayer mode in which you need to both attack and defend. You earn a special currency throughout the battle which can be used to send more enemies to your opponent when you see a hole in his defense.
Public matchmaking
Private games

CUSTOM LEVEL BUILDER AND BROWSER
The custom level builder allows you to create your very own maps and publish them for all to use! You can browse, preview and play the maps and even leave a review. This lets you enjoy the experience of building and sharing with the community.
Highly customizable wave-builder
Three map sizes
Build your own map with up to three paths
Create up to 15 waves of enemies
Designate tower locations and place other props
Save your progress
Publish the map