The Nightmare from Beyond

The Nightmare from Beyond is a cosmic-horror third person platformer inspired by the works of H. P. Lovecraft. You take on the role of Sanja, a young woman from the D'nyg race, as she explores a mysterious land in search for her sister, Dajana.

There, Sanja will decipher what that place is, what is happening there, and why her sister was taken. She will also be in constant danger, for unspeakable horrors are watching her every move.

This time I wanted to show you a little of what we’re doing for tutorials. 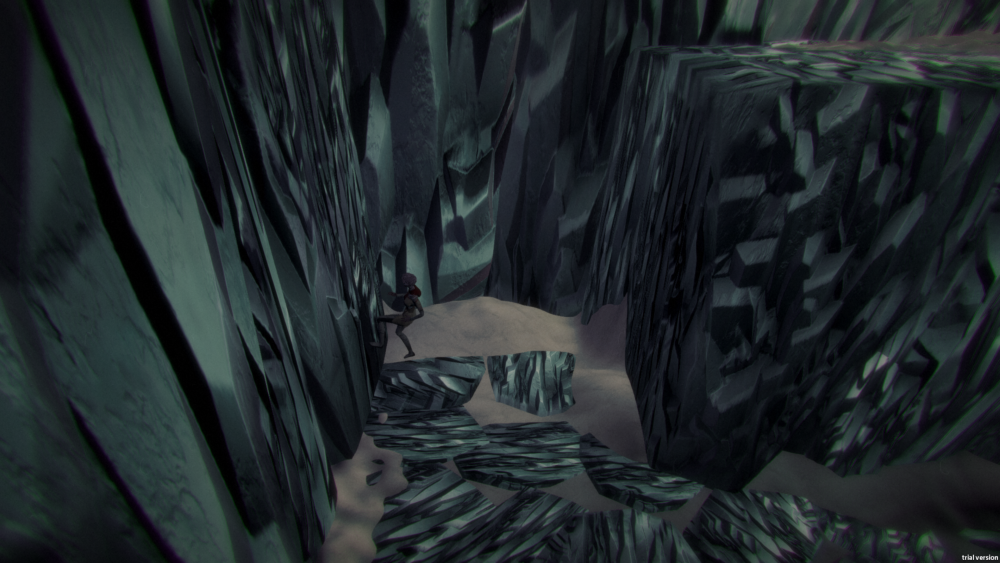 Personally, I don’t really like regular on-screen tutorials where you’re told how to do stuff with on-screen prompts, so we’ve been trying to find ways to teach the mechanics without having to use these kind of tutorials.

At some point, I remembered Tomb Raider 4 (AKA Tomb Raider: The Last Revelation). At the beginning of that game, you play as a teen Lara, and she’s pretty much learning to do stuff from Werner Von Croy. I went to Youtube to revisit that experience (since it’s easier than installing the game), and I thought it was a pretty nice way to introduce navigation (as long as you don’t count the “come child, now PRESS ACTION to grab the thing” parts). I thought we could do something similar and use an NPC as some sort of “teacher.” If you’ve played Enola, you know I am all for story in a video game, so I didn’t want that NPC to tell you how to perform actions.

I mean, it would suck if a character said something like “Sanja, we have to get to through this small hole. Press CTRL to crouch and then follow me!” 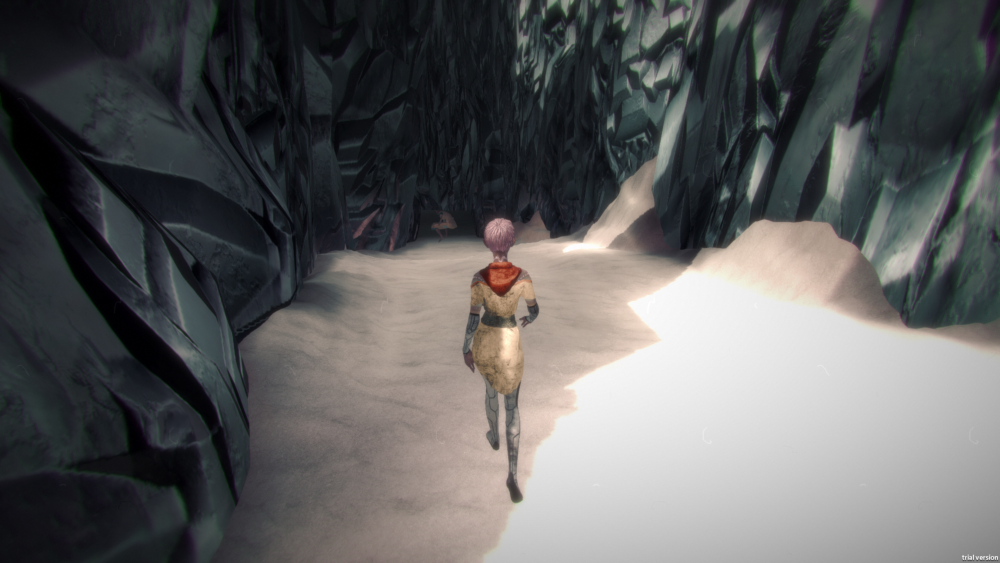 So, we had an idea for the tutorial but then we needed to find a way to make it actually work in the game. For this, we decided to make a few things . First, we made an NPC that can perform pretty much all of Sanja’s moves, so if the NPC needs to climb a wall or do a wall jump, it can do it. Second, we made a pretty linear level, so you know there’s only one way to move forward: “follow the NPC.” And third, we made that NPC work with the story. 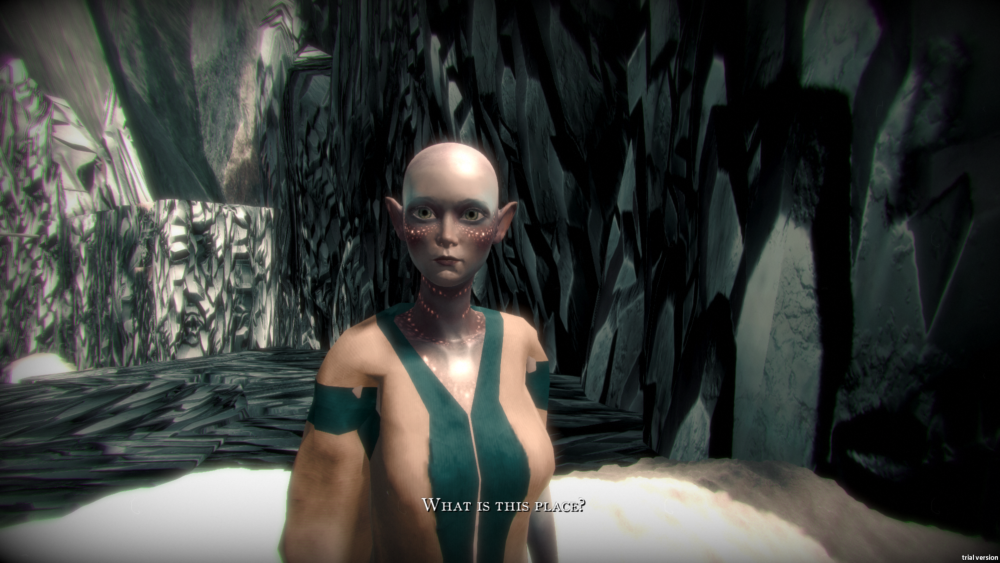 Right now we have a short demo that we can show to publishers/investors (I know we could try Kickstarter, but I’m not seeing it as an option right now), and our “teacher” character is the woman you see above. In the final game, however, the “teacher” will be someone else.

This character will serve to give you some (vague) background about the story and why you are there. The visual aspect is also important from a storytelling point of view. In this demo, when you see this woman for the first time, you notice she’s wearing a stolen coat (mostly because it’s too big for her), and also that she has a shaved head. This woman delivers some lines and then moves on, then waits, then continues. The idea is that, when you see her do stuff, you have to try to do the same.

Of course there’s the fact that her AI is still a little buggy, and sometimes she will miss a jump or something like that… we’re still working on that -_-… 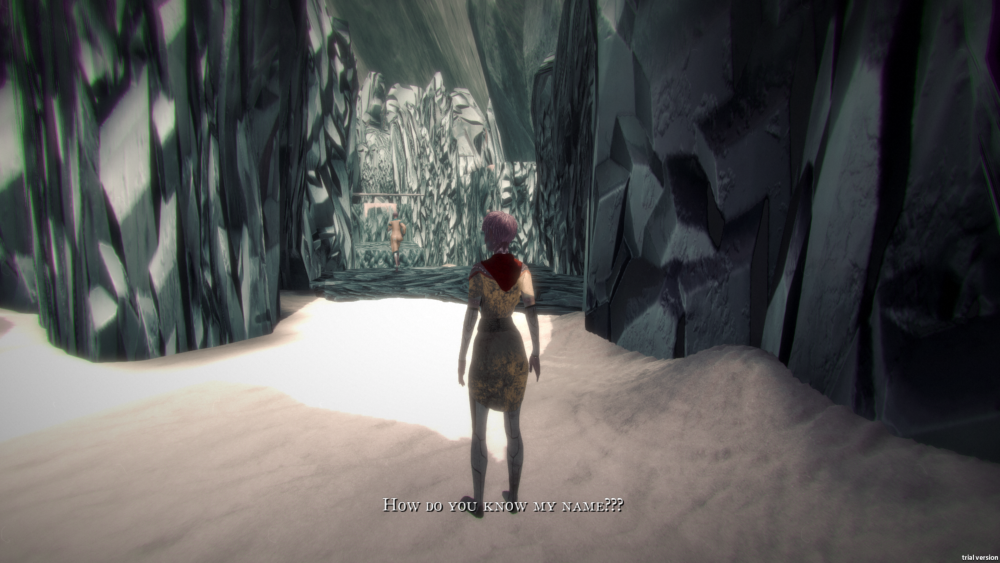 For example, in the image above you see her run away to an horizontal “pole” made of stone, and then she gets into a small hole. There are only two exits to this area: one is a small hole right behind you (and the previous area has no exit, so it doesn’t make sense to go back), and the other one is the small hole on the other side (the one the woman uses). So, your only option is to follow her, doing what she did.

Controls are also a tricky part. We have to take advantage of the fact that people has played other platformers before, and we need to keep controls simple, specially since we’re not using on-screen prompts to give you information. For example, for this swing pole, we could have used a complex combination of inputs, like “UP + ACTION to grab the bar and then JUMP to jump off the bar” but how are you supposed to know that? For that reason, we rely on simple inputs, like JUMP for everything jump related (JUMP at the exact moment to jump off that bar). Another example is the ACTION button.

Teaching mechanics this way is more challenging than simply teaching input commands, but it’s far more interesting, and makes the tutorial feel like a part of the experience.

SO happy to see you working on a new game! I was obsessed with Enola and we had a couple of nice PMs about it on Desura way back when. I will definitely be picking this up in early release stage on Steam, and will be sure to leave feedback (on Steam review section). Rock on guys!

Hi there! Thanks a lot! I do remember those PMs we had back then, and I really hope you like this new game. It's very different to Enola, but it's still very dark and weird!

Indie
Tags
Embed Buttons
Link to The Nightmare from Beyond by selecting a button and using the embed code provided more...

MASTEMA Out of hell Platformer

Blood of the Werewolf Platformer