What if Final Fantasy Tactics & Dynasty Warriors had an illegitimate daughter?

The Last Spell is a turn-based tactical RPG immersed in roguelite mechanics in which you lead a team of hardened heroes to defend the last bastion of humanity against hordes of monsters.

This is the end. War and a bunch of crazy mages provoked The Cataclysm. A mysterious mist filled with hellish monsters enveloped most of the world. They said that those who entered the mist were killed, driven mad, or even turned into monstrous abonimations themselves. Only a few Havens keep up the fight against the Hordes of bloodthirsty monsters that come out at night from this strange purple mist.

Days were quiet and peaceful: they could take time to organize themselves, heal their wounds and search the surroundings for anything useful. But the nights… The mist thickened and from their bowels unleashes hordes of mutated monsters, craving for blood and magic.

In this glorious mix of pixel art and dark fantasy setting, you lead a group of hardened warriors whose only purpose in life is to desperately defend the last of the mages while they try to cast The Last Spell, and banish all magic from this world. And maybe save us all. Maybe.

How to create a skill animation? + A little surprise at the end!

Some news from the front!

We hope you’re safe! Here, it’s summer, so we try to make the most out of it, despite… pretty much everything 2020 has brought upon us! But we try to stay positive! 🙂

The Steam Game Festival ended about a month ago, and we couldn’t be happier with how it turned out! That was why we even decided to extend the availability of that demo a little bit, so that more players could try it and give us a lot of invaluable feedback! 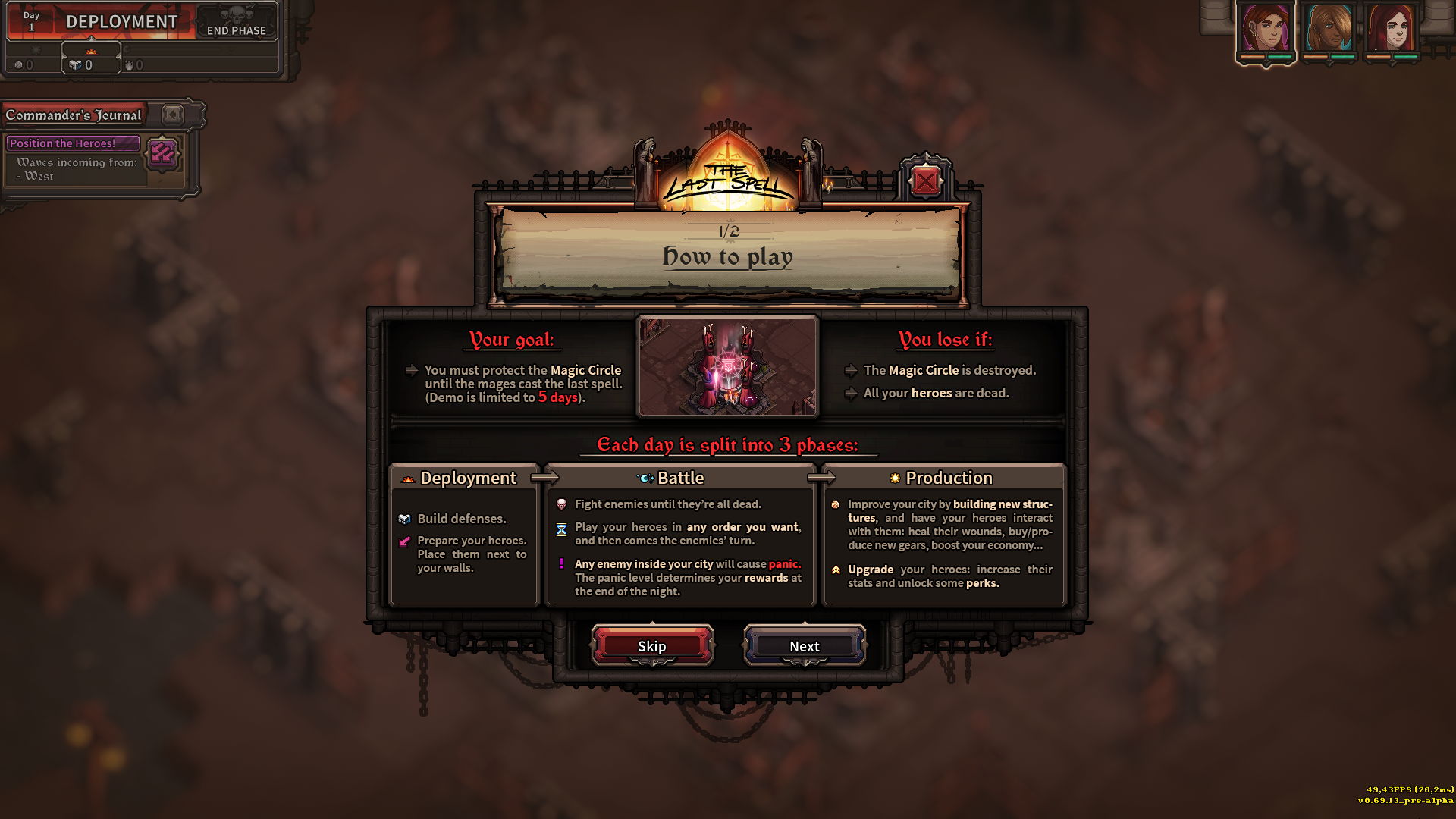 A screen very well-known for our demo players!

As we stated before, we still have long months of development ahead of us, so we won’t be announcing the release date just yet… But don’t worry, we’re working hard on the game and we’re slowly getting close to the release of The Last Spell!

Although we won’t be talking about a new feature today, we thought it could still be a nice occasion to talk about the art of the game! Thus, we’re going to discuss one of our players’ favourite features in The Last Spell: the special effects that we made for the many skills in the game!

However, I’m just the Community Manager, and you don’t want to see my art skills, so today Adrien will help me for this blogpost! 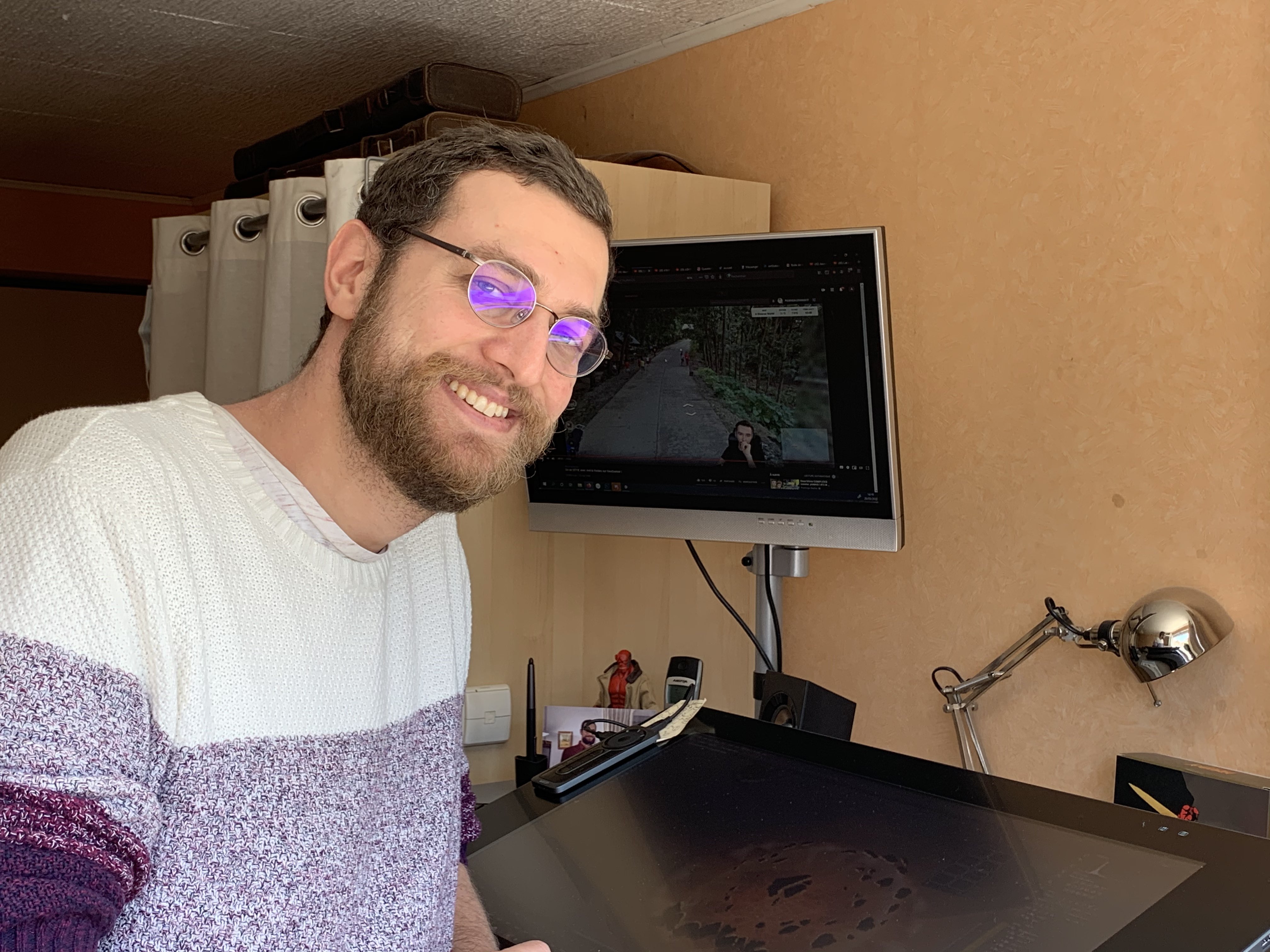 Adrien is our super talented FX artist for The Last Spell!

Please keep in mind that for the rest of the blogpost, we’ll use “FX” that means “special effects”.

Hey survivors! This is the first time I’ve written a blogpost, but I’m happy to share with you folks how I work! 😊

So, my name is Adrien, I started to work on The Last Spell in March 2020! Before working at CCCP I studied games art at the Emile Cohl school in Lyon and did internships at PassTech Games and Piece of Cake Studios. 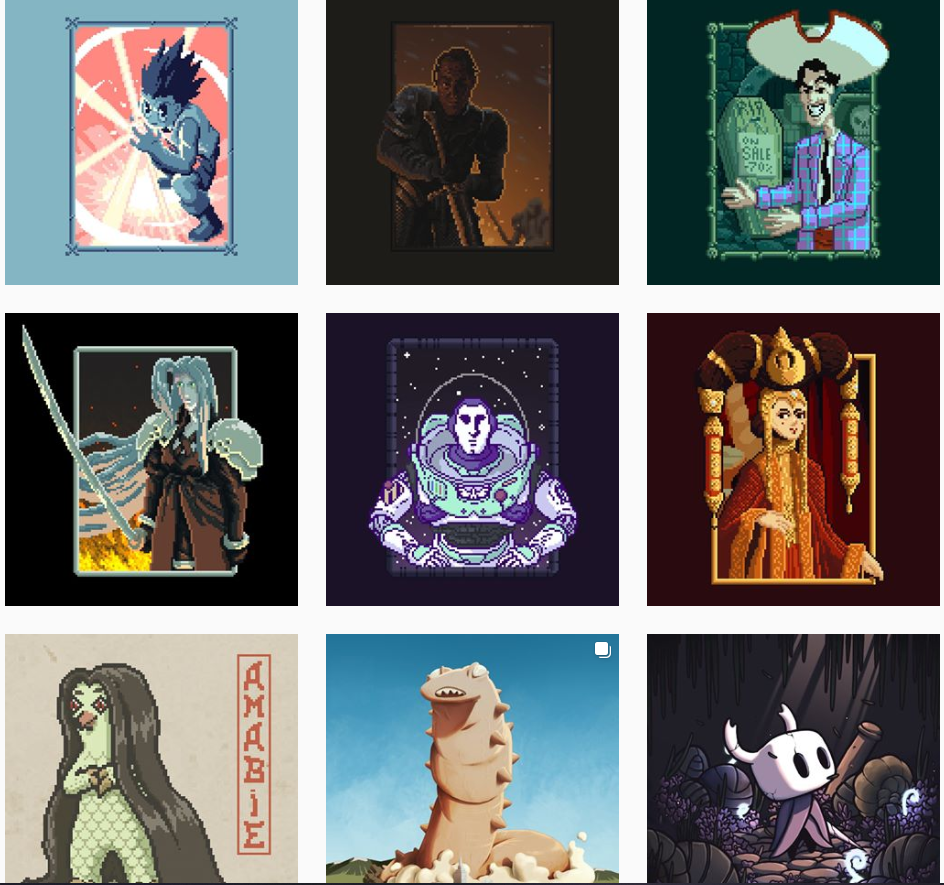 Some of Adrien’s work! You can check his instagram: Instagram.com

I’ve always loved working with pixel-art, so I was really happy to work on The Last Spell! 😊

Originally, Jacques and Manon designed the FX of The Last Spell all by themselves, but since there are a LOT to make for the game, I came in the team to lend them a hand!

But enough about me, let’s talk about a very important part of videogames in general: animations! Even if The Last Spell is still an indie game, Jacques and Matthieu (the creative director) wanted the attacks to look “good” and “powerful”. One of the very first pillars of the game was to have this team of heroes, who may not have the best gear at first, but who can launch very powerful and impressive attacks! And animations play a big role for that!

The assassinate skill in The Last Spell

One very crucial rules in animation is the question of timing. For example, for a shot (from a gun), you need a big anticipation followed by a very quick action. If I take the assassinate skill from the rifle in The Last Spell, there’s a long moment when the rifle loads, but the shot only lasts a few frames!. For an explosion, the impact will be very quick, this means that the explosion will expand really quickly (2/3 frames), but then the smoke and debris will take longer to dissipate… The timing is what allows you to have a dynamic animation, basically. 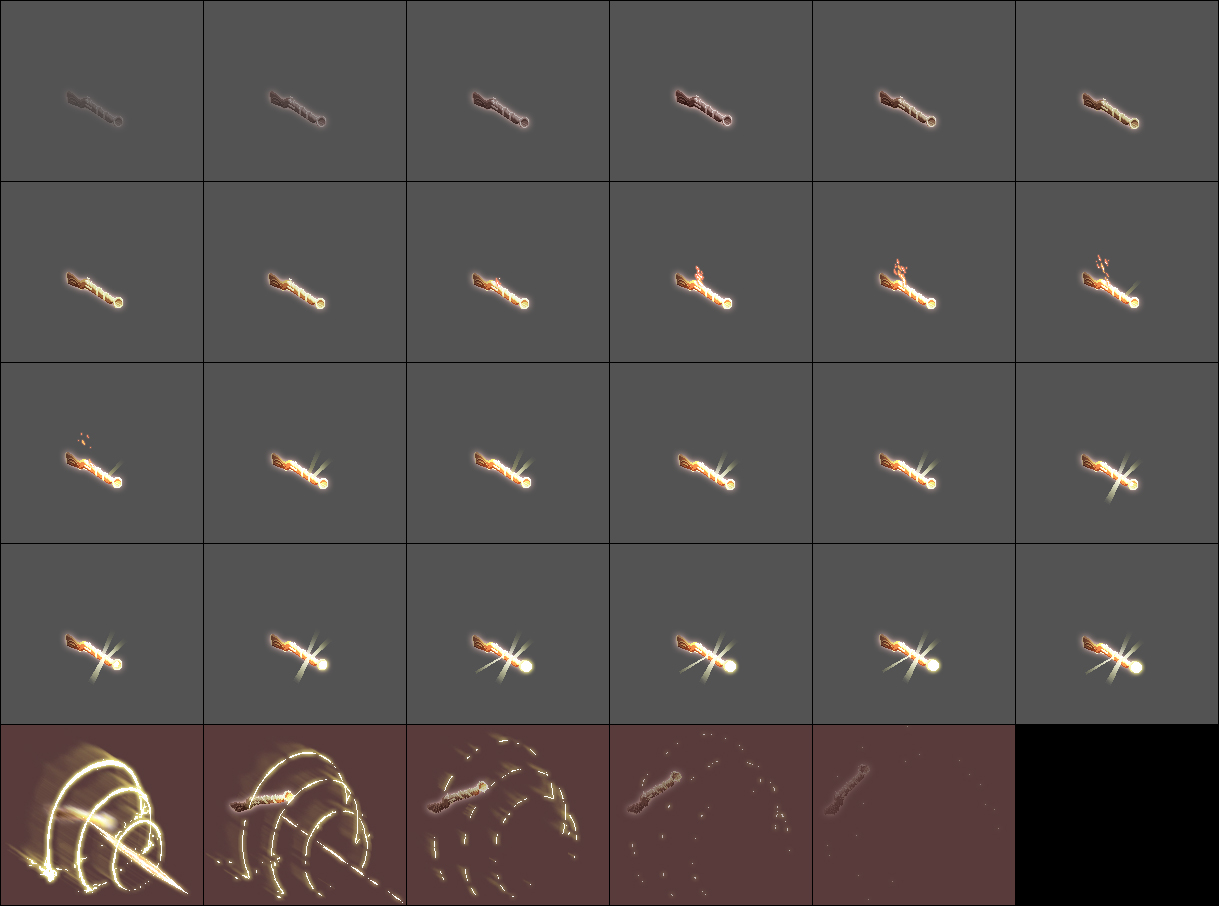 But enough with the theory! I’m sure you want to have another more detailed example from The Last Spell, don’t you? 🙂

How do we create an attack animation in The Last Spell?

I’ll walk you through an example of one FX I worked on a few months ago: the Entangle skill that you can do with a druidic staff!

For those who missed the demo, here’s the skill ingame!

This is actually the combined work of Jacques (the art director), the game designers and I, and there are a LOT of discussions for every attack in The Last Spell, so I’ll try and sum it up the best I can! ^^

Actually, before animating anything, you have to gather info: the name of the attack, the area of effect, magic/not magic…

So, for this attack, we knew it belonged to the druidic staff, which is a weapon with strong ties to nature itself.

Also, thanks to the game designers, we had very vital info, such as the shape of the attack, if there was any debuff with the attack, the damage. If this is a “small attack”, I’ll do a very different FX than from an “OP attack” that could kill 20 enemies in one shot! 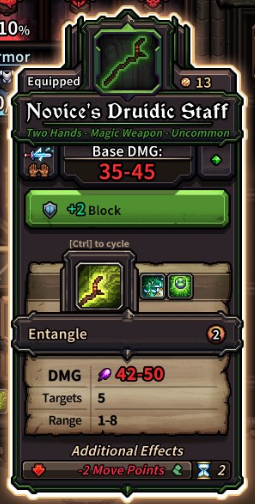 At this point, I started to be inspired by an attack that would strangle the enemies with very spiky brambles.

So, I looked for references, drew some first sketches and I had a veeeery early version of the attack on my notebook! 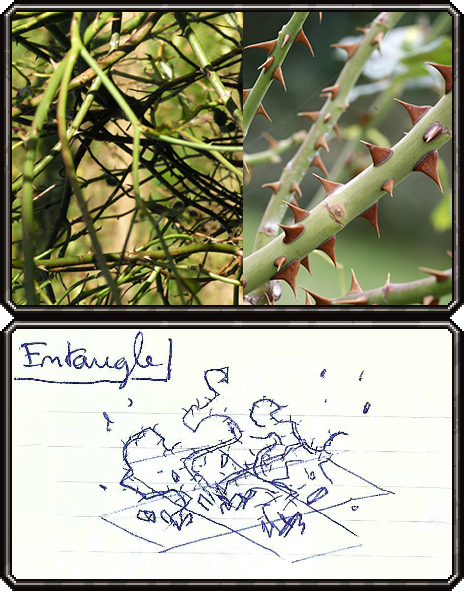 Once I had a very rough idea of what the animation would look like, I went on my software (I use photoshop, but there are many other software you can use: TVPaint, Krita, Flipbook, ToonBoom Harmony, Gimp…).

This is a really important step, as you need to draw the main motion of your FX. It’s still rough, but that will be your guiding principle for the rest of the process! My advice is to take your time to find the right timing and shape.

Once that’s done, you need to clean your animation! There isn’t much to say about this step besides that it has to look nice. You’ll notice that I redrew the brambles and added some thorns to them.

Finally, the fun part! The details!

Basically, that’s the step that will make it look great and not just good! At this point, you can add some particles, glowing, hue and saturation, layers to change the color of your FX throughout time… Be careful though, this one can be very time-consuming.

For the entangle FX, I added color, particles of dirt and a white frame to emphasize when the hit occurs on the enemy.

And tadaaa! Now, it’s ready to be integrated in the game!

I even made a small gif that sums up all those steps, so it can be useful for the aspiring artists out there! 😉

Bonus time: the magic of code

Something I didn’t include in my “How to” gif, but that can be important to note: in the very first gif, you will notice there’s a very small part of the gif that I didn’t explain. Here’s the one:

Basically, it will randomly appear in the areas hit by the attack, but at different moments of the animation! That’s done thanks to our wizards known as “programmers” 😉

Now, I have to go, I still have a few dozens left to animate… Wish me luck!

Thank you Adrien! So yeah, this is how you make one FX in The Last Spell.

One last thing: The Last Haven

We’ll end up this blogpost by doing a small announcement for those who missed it! 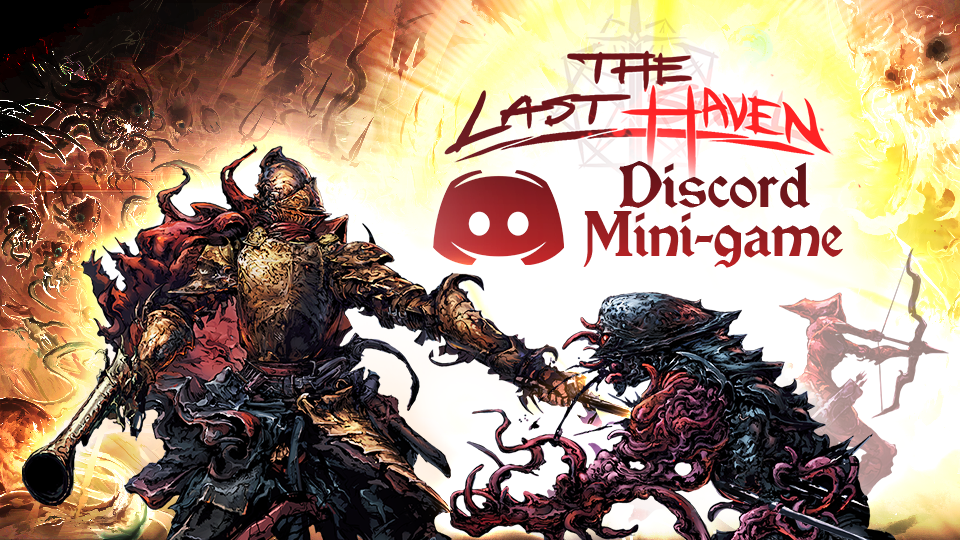 We are happy to announce that we made our very own Discord mini-game, called “The Last Haven”!

It’s something we made for our fans as they wait for The Last Spell. Protect the city by killing the enemies, break the seal of magic, save the Haven and become a real hero!

So, if you want to help the other players save as many Havens as possible (and maybe get a nice surprise?), join our Discord server!

Do you have a question for Adrien, or Jacques or Manon (our artists for The Last Spell!)? Tell us in the comments or join our Discord server!

Slay hordes of monsters in the demo of The Last Spell, a tactical RPG immersed in roguelite mechanics!

Skills are tied to the weapons in The Last Spell. How do they work? Find out in this new blogpost!

Find out more about the stats in The Last Spell and how they work during combat!

Today, we discuss the gameplay loop of The Last Spell, with the day and night phases!

The Dungeon Beneath Turn Based Tactics